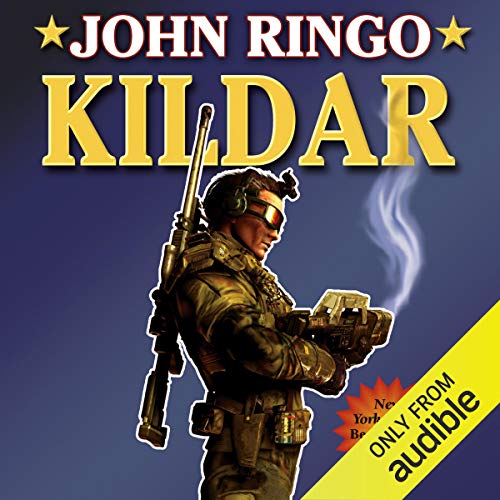 The Sequel to Ghost - Kildar

Ex-SEAL Mike Harmon has bought the farm - literally, in Eastern Europe. But trouble follows him even there, and the man who has made himself anathema to terrorists from Syria to Paris suddenly has Chechen terrorists banging on his own door.

Andy McKinney
VINE VOICE
4.0 out of 5 stars Mike Harmon doesn't like white slavers or Islamic terrorists. He kills them.
Reviewed in the United States on November 17, 2014
Verified Purchase
Kildar

In the second of John Ringo's muli-volume Ghost series ex Navy SEAL Mike Harmon finds a quiet place to hide out, all quite by happenstance. While traveling in the back country of the country of Georgia he gets caught in a snow storm. He finds that a piece of property, an old time caravansary is for sale, but it comes with a large spread of acreage. It also comes with tenants.
Mike, under a cover name and identity (he is after all on the bad list for a number of Islamic terror outfits) uses some of the money he scored in his previous adventures depicted in “Ghost” to buy the antique but imposing building, land, tenants and all. He likes their beer and it seems like a nice place to dig in for a while and just chill.
Right next door is Chechnya, a part of Russia filled with Islamic terrorists. His new people live right in the danger zone. But Mike Harmon is a killer and a trainer of killers. His new tenants turn out to be excellent potential soldiers. Chechen terrorists had better watch their step.
As military style adventure “Kildar” works just fine. But Mike has a kink in his character of a deviant sexual nature. Be prepared to read about his sexcapades in perhaps more detail than the casual reader might expect.
I have read the entire series and this week, while contending with a bout of flu, re-read “Kildar” as a kind of book version of comfort food. I liked just getting warm in my blanket and relaxing with a familiar book.
I particularly liked Ringo's description of team building with the raw troops and his exploration into a plausible historical/social fantasy to explain the ethnicity of his new tenants.
A good read, worth the time and money for the reader.
Read more
4 people found this helpful
Helpful
Report abuse

Nick Howes
5.0 out of 5 stars Emphasis on This Kildar Entry is Fantasy-Fulfillment
Reviewed in the United States on May 23, 2013
Verified Purchase
The pleasure in this very readable second entry in John Ringo's adventure series is the fantasy-fulfillment . The action is down from the first book (Ghost) but Ringo lays the groundwork for his very action-heavy series entries to follow with this book. It is richly satisfying in a different way. Mike Harmon is the Ghost, incredibly rich, with his own harem of beautiful women, owner of his own castle, with a private army and retainers, ruler of his own little pocket kingdom, his own cool title (the Kildar), and able to effortlessly deal with enemies by handing them their heads. It's what I want to be when I grow up. In a remote section of the "stans" of southwest Asia, Harmon buys up the local caravanserai (an inn for camel caravans) where he will hide out in comfort and safety beyond the easy reach of vengeance-driven Arab terrorists (see Ghost). His purchase also brings with it the rest of the valley, its tenants, and the title of Kildar. Accepted by the locals and paying good cash, he starts building up his own private army. The next time the anti-Russian Chechen terrorists enter the valley to murder, pillage, and kidnap female slaves for the sex trade, they'll face the Kildar and his Keldara warriors. His guys have the right credentials as the descendants of the Byzantine emperor's Viking bodyguard. Expect a great fight at the end with the terrorists to top things up and it promises a lot of future action in subsequent novels. A little general knowledge on the tumult of southwest Asia while you're at it. Doesn't get better.
Read more
4 people found this helpful
Helpful
Report abuse

J. Hulet
5.0 out of 5 stars Modern Military Fantasy
Reviewed in the United States on June 23, 2008
Verified Purchase
How many people have fantasized about being rich, deadly, super-fit and a sexual monster all at the same time? Well, Ringo wrote about it and built a fun story-line that is entertaining while remaining just outside the realms of reality.

Kilar is a fun follow-up to the first book in the Ghost series and it lacks some of the grit and much of dark overtones that they first book included. The main character is still a testosterone-ridden adrenaline junky with too much libido and just barely enough self-restraint to remain out of prison. With that in mind, the story is just for fun. It's like reading a Rambo book where you know that the hero is going to win every fight and even if he gets banged up he will still get the girl in the end.

Don't look at this like it's anything other and entertaining fiction with a little bit of geography and a little bit of political commentary(very minor) thrown in for fun. It's basically a man's fantasy of what would happen if....
Read more
One person found this helpful
Helpful
Report abuse
See all reviews

Marshall Lord
4.0 out of 5 stars Vast improvement on "Ghost" but still pushing the envelope
Reviewed in the United Kingdom on May 17, 2008
Verified Purchase
This is the second book in the series which began with "Ghost". "Kildar" is much less outrageous, and rather better written, than the first book in the series but still goes over the top in several places. As a rough litmus test, if you were strongly against the Iraq war, are very pro-feminist, or even slightly prudish, do your blood pressure a favour and refrain from touching this entire series with a ten foot barge-pole.

At the start of "Kildar", having prevented some dire terrorist atrocities in the first book, former SEAL Mike Harmon has gone travelling in various remote parts of the world to keep out of the way of those people who would like revenge on him. Stopping in a remote valley in Georgia ("the country not the state" as he repeats umpteen times during the book) he decides to buy the local castle as a place to stay. It turns out that the castle and associated farmland comes with some feudal retainers, the Keldara, who accept him as their liege lord or "Kildar" - and if that sounds wierd and anachronistic at the start of the 21st century you ain't read nothing yet.

The full series currently consists of

John Ringo normally writes military SF and most of his offerings in that genre are extremely good. This series is about a freelance war on terror. In places, and especially in the first book, Ringo seems to be in grave danger of crossing the line between challenging the reader and going out of your way to see how many people you can offend. That goes even for his existing fans among military SF readers, who are probably neither the most prudish or left/liberal of audiences.

In fact the funniest part of "Kildar" and each subsequent book in the series is not part of the main text - it is the disclaimer at the start of the books which at least demonstrates that Ringo understands and has a sense of humour about the controversy "Ghost" stirred up. That disclaimer is worth quoting in full, it reads as follows:

"This is a work of fiction. All the characters and events portrayed in this book are fictional, and any resemblance to real people or incidents is purely coincidental. This book and series has no connection to reality. Any attempt by the reader to replicate any scene in this series is to be taken at the reader's own risk. For that matter, most of the actions of the main character are illegal under US and international law as well as most of the stricter religions in the world.

"There is no Valley of the Keldara. Heck, there is no Kildar. And the idea of some Scots and Vikings getting together to raid the Byzantine Empire is beyond ludicrous.

Incidentally, that line about "any resemblance to real people or incidents is purely coincidental" is a classic example of a blatantly false statement which escapes being a lie only because both author and reader know that it's a legal fiction which he has to write and makes no attempt to fool anyone. Osama Bin Laden and Vladimir Putin appear in these books under their real names, certain other characters will instantly be recognised by any politically aware reader as corresponding to real world US politicians.

All five books in the series contain a great deal of violence, strongly expressed and very right-wing political views, and a lot of references to sex, always utterly politically incorrect and sometimes fairly explicit. My copies of these books are stored where my children can't get at them and will be until they are adults.

Provided you are not offended by the sex, violence and non-PC attitudes, these books can be quite exciting and entertaining in places. But I would advise feminists, left-wingers, and anyone even slightly prudish to save your money for something else.
Read more
3 people found this helpful
Report abuse

Kindle Customer
5.0 out of 5 stars Wish there were more books in the series.
Reviewed in the United Kingdom on August 21, 2020
Verified Purchase
Great read and very enjoyable. Looking forward to reading the next instalment. Well written and not the first time I have read this series.
Read more
Report abuse

John O'sullivan
4.0 out of 5 stars Vargarian guard, brilliant!
Reviewed in the United Kingdom on April 15, 2015
Verified Purchase
Mike gets more action but now he has followers, followers he seems to have inherited with a mansion he bought in the middle of nowhere.
These followers are odd though, real intense with some weird traditions, military combat elite warrior type traditions.
All they need is some training, some equipment and some direction and he just might have an elite fighting force!
Brilliant Ringo again, develops his character above the cartoonish ghost origins, riveting
Read more
Report abuse

RSW
4.0 out of 5 stars Pretty good read
Reviewed in the United Kingdom on July 3, 2017
Verified Purchase
generally a good series, guns, sex and action. Silly historic perspective. But who cares still fun to read. Not for the pc brigade
Read more
Report abuse