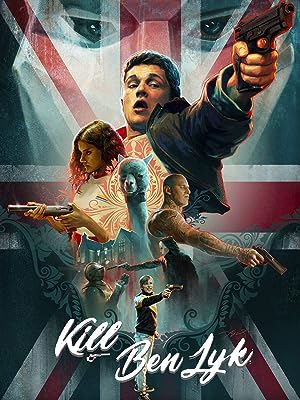 (7)
4.81 h 17 min202016+
Ben Lyk is a YouTuber living in London. He wakes up to discover that 3 other Ben Lyks in London have been murdered! Scotland Yard decides to gather the 8 remaining Ben Lyks in a safe house, which turns out to be not so safe, to protect them. Once the Ben Lyks begin falling one by one, it's a mad dash to solve this murder mystery. Ben Lyk has now become the most dangerous name since Sarah Connor!

B&S About MoviesReviewed in the United States on February 23, 2020
2.0 out of 5 stars
Fun British spy movie
Three Ben Lyk’s have been murdered in London, so Scotland Yard puts all of the people with that name together until it can figure out why. Yes, a masked killer with a strange mask is wiping them all out. And that would be a bad thing for anyone but one of the Ben Lyks (Eugene Simon, Lancel Lannister from Game of Thrones), a YouTuber looking for a chance at the celebrity that he’s always dreamt of.

This is the first feature from director Erwan Marinopoulos, who has an assured style and opens the film with quite a bang. Literally.

I really like how Scroobius Pip shows up in this movie. I’ve meditated on his lyrics for the song “Thou Shall Always Kill” for years, so it was fun to see him in this.

So what happens when every Ben Lyk is in the same spot — including a former Falklands hero and a female Ben? Well, all Hell breaks loose and hijinks ensue. Plus, the design of the villain is just plain awesome.