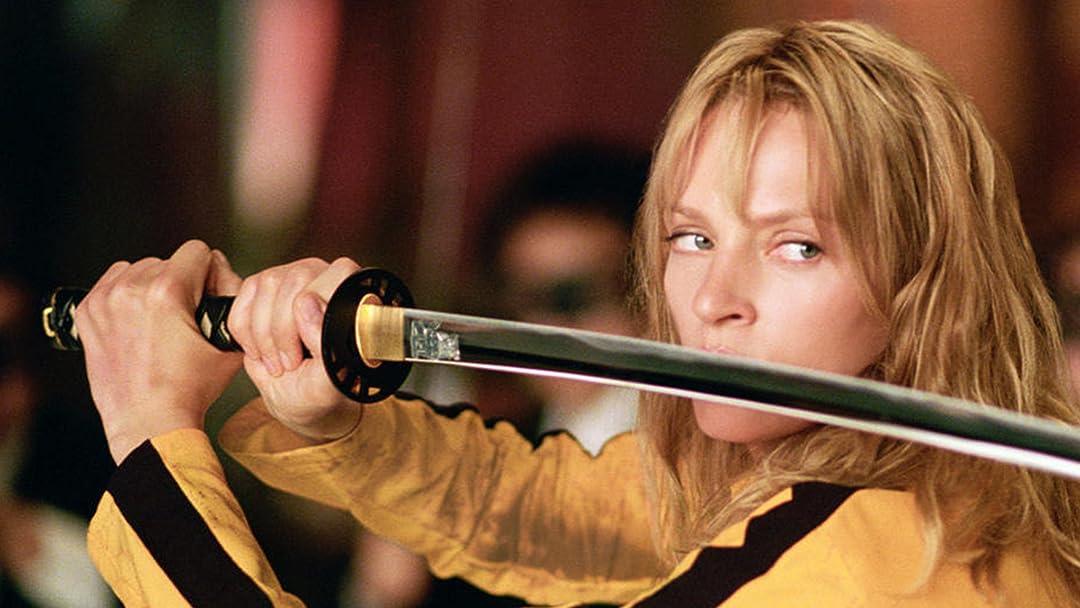 (7,955)8.11 h 50 min2003X-RayR
HD. Uma Thurman is a samurai-swinging ex-assassin on a mission of revenge against her ex-boss and lover in this Quentin Tarantino film.

joel wingReviewed in the United States on June 29, 2020
5.0 out of 5 stars
My favorite Tarantino inspired by Japanese & Hong Kong action flicks of the 60s-70s
Verified purchase
Probably my favorite Tarantino film and that’s saying a lot because he’s put out some classics. Tarantino likes doing genre films. Death Proof was a take on the low budget b-rated films of the 1960s and 70s. Inglourious Basterds was a war film. Django Unchained was a period piece. The Hateful Eight a Western. Kill Bill Volume 1 was an action movie inspired by Chinese and Japanese cinema in a fantastic mash up. Tarantino always loved dialogue and usually spent most of his time focusing upon that. In Kill Bill Volume 1 however, the fighting, the gun play, the sword fights, etc. were all at the forefront. The film focuses upon revenge, specifically the Bride (Uma Thurman) seeking to kill all those that killed her fiancé, her baby, and tried to murder her.

Emphasis upon the action is right at the start. The Bridge has a hit list and she starts with Vernita Green (Vivica A. Fox) a member of the Deadly Viper Assassination Squad that the Bride used to be a member of and carried out the hit job on her wedding. The Bride knocks on Green’s door and punches her in the face. They then have a no holds bar brawl in the living room. That’s what the entire movie would be like. This was about the Bridge hunting down her prey and killing each one of the people who tried to do her in. Watching her do it was a joy and again harkened back to Tarantino’s main influences for this film Hong Kong martial arts flicks and Japanese samurai movies.

There are tons of amazing scenes in the film. Another member of the Deadly Vipers Elle Driver (Daryl Hannah) whistling while she walks through a hospital to assassinate the Bride. Her revenge upon Buck the nurse that took advantage of her while she was in a coma. The ode to Anime with a short cartoon on how O-Ren Ishii (Lucy Liu) killed the Yakuza boss that killed her family. The meeting with Hattori Hanzo (Sonny Chiba). All topped off by the gigantic never ending fight scene in a Japanese club where the Bride takes on all comers including an entire gang. It was the perfect mixture of action and blood with a great script rarely seen in the United States. It’s the reason why you can watch this movie over and over and it never gets old.
C

N. HanksReviewed in the United States on November 9, 2019
2.0 out of 5 stars
Boring and predictable
Verified purchase
I loved Pulp Fiction and really wanted to like Kill Bill. The first part had some clever/interesting/funny stuff, but it got super boring towards the end. The first fight scene was clever and well done; subsequent fights were just tedious, one of the fights was like 15 minutes of the same thing over and over so I skipped through a lot of it. I expected more creativity but the characters were really predictable. I only finished watching it because I hoped it would somehow have a super-creative surprise ending, but nah.
6 people found this helpful

Christopher DiemReviewed in the United States on April 8, 2019
5.0 out of 5 stars
Intense, action-packed, and just awesome.
Verified purchase
Quentin Tarantino, you have seriously outdone yourself with this movie. The action was amazing, gory, but amazing, and the acting was great, too. Uma Thurman nailed her role as The Bride, and I think that she had some fun with it. Everyone else did great too, especially Lucy Liu. The story is definitely well developed, and each main character was memorable. Awesome movie.
8 people found this helpful

Todd7Reviewed in the United States on February 28, 2017
5.0 out of 5 stars
It's Tarantino
Verified purchase
Kill Bill Vol.1 is an unusual concoction of being a film that's a wild ride and very strange, yet the plot is simple. In typical Terantino style, things are offbeat and contorted, but the plot moves along. This is a film about revenge, though it still manages to evoke laughter. I think that this film has the perfect cast, especially Uma Thurman in the lead role. Her acting is superb, and very skillful with the action sequences. Yes, this film can seem a bit eccentric and outrageous, but I think its sole purpose is to entertain without too much judgment. Overall, Kill Bill is money well spent. The special features are great as well.
16 people found this helpful

Paul S. PersonReviewed in the United States on October 13, 2020
3.0 out of 5 stars
Mediocre Tarantino
Verified purchase
This film isn't actually a bad film, just a boring film. Despite all the Action Sequences.
Part of the problem is that it is almost entirely Action Sequences. Of course, if you are looking for a film with lots of Action Sequences (in particular, one-on-one combat with edged weapons), you may find that a desirable trait.
The other part is that The Bride has no actual character at all in this film.
Nor, for that matter, does anybody else (except one Japanese sword maker) -- they are all just cardboard figures fighting with swords or knives.

HannahReviewed in the United States on March 4, 2021
1.0 out of 5 stars
Pretty bad ngl
Verified purchase
I rented this film without any knowledge of it. I remember seeing the dvd cover in the Blockbuster aisles as a kid and wanting to watch it. However, if I knew it was directed by Quentin Tarantino I would have never paid for it. It is definitely a movie for men made by men. I found the dialogue cheesy and somewhat cringey. And the whole female rage thing didn’t work for me. I know some women love how ‘Kill Bill’ showcases how women can be badass, angry, and violent to those who have wronged her, but I just found it to be another example of men using the “female villain arc” to justify abuse. Because if She gets revenge in the end, then the abuse toughened her up right? It did her good, right? What doesn’t kill you makes you stronger, right? Men will continue to make movies where women are abused and treated terribly just to make them powerful in the end as an example of how abuse can be justified. Men like watching movies where the abuse they have given makes woman stronger so they don’t have to feel bad about it.
One person found this helpful

DMGReviewed in the United States on September 1, 2015
5.0 out of 5 stars
Upgraded 'B' Film to an A+: Kill Bill Volume One
Verified purchase
This film, which has many, many reviews on Amazon, is a product of old "B" movies, foreign martial arts
and revenge movies that came before it. This is what Director Tarantino does for a living; he remakes
those old film genres into a stylish sub-genre that pays tribute to those "B" films and mixes in style and
grace.

The revenge film has been a theme since film began. "Kill Bill Volume 1" is about a woman who is an
ex-assassin with an attempted assassination during her wedding by ex-comrades. "The Bride", her only
moniker, barely survives the attempt, then goes about seeking revenge on her enemies one by one
and of course destroys hundreds (at the least) of those attempting to stop her. Silly them. They don't
even come close.

I loved this film. Growing up in a time when movies played on TV all the time I was exposed to all those
genres 'Kill Bill' has fun with and serenades at the same time. The differences between the old and new
are the writing, acting and levels of 'realistic' violence in a Tarantino film.

The writing can be snappy, clever, or simply move the story arc and the directors does a very good job
of keeping this an action picture instead a "chic flick". Dialogue is at a minimum in Volume One.

The acting is very good considering what this film portrays. All the actors are wonderful and have been
restrained in comparison to some old 'B' films were ham was served de rigueur on a wooden platter.

The action is high concept . It is bloody and relentless at times. Tarantino knows when to scale it back
and when to let loose. There are a few scenes where limbs are lost on a large scale. I am not one for
realistic blood for the sake of blood. Those films soon become self- parodying and uninteresting. I recoil
at the sight of "realistic" bloody scenes and find them altogether unnecessary.

Tarantino needs to mimic, to a certain degree, the gratuitous violence in some of those old films. He did
not go overboard in my opinion. Just enough to get the point across that this woman is not going to be
stopped and woe to any man, or woman, who attempts to stop her.

5 Stars for, again, reinventing old cinema with fresh dialogue, good acting and, again, an eclectic and
wonderful soundtrack. Highly recommended if you like action revenge movies that pays homage to the
elders of the genre.
One person found this helpful

Kindle CustomerReviewed in the United States on September 19, 2018
5.0 out of 5 stars
The standout kill fest
Verified purchase
Such an incredible start to a two-part movie whose second chapter was a shallow reflection of its predecessor. An action film to stand out and be noticed, I can't think of a single misstep in the entire film. Perfectly executed. I have no idea what happened with part 2.
2 people found this helpful
See all reviews
Back to top
Get to Know Us
Make Money with Us
Amazon Payment Products
Let Us Help You
EnglishChoose a language for shopping. United StatesChoose a country/region for shopping.
© 1996-2021, Amazon.com, Inc. or its affiliates