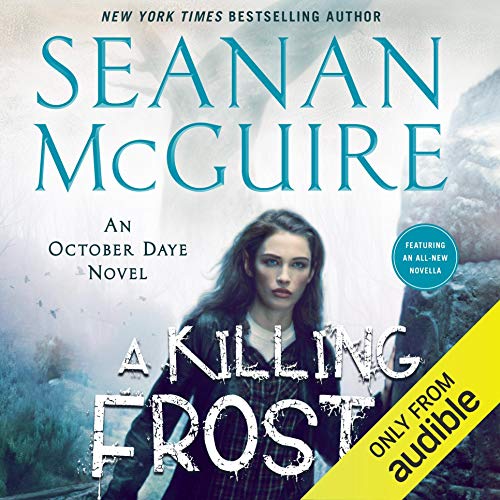 4.7 out of 5 stars
4.7 out of 5
1,190 global ratings
How are ratings calculated?
To calculate the overall star rating and percentage breakdown by star, we don’t use a simple average. Instead, our system considers things like how recent a review is and if the reviewer bought the item on Amazon. It also analyzes reviews to verify trustworthiness.
Top reviews

Marzie
5.0 out of 5 stars Most exciting Toby book since The Winter Long and The Brightest Fell
Reviewed in the United States on September 2, 2020
Verified Purchase
So here we are at book 14 in the series. According to the blurb we know that:

"When October is informed that Simon Torquill—legally her father, due to Faerie's archaic marriage traditions—must be invited to her wedding or risk the ceremony throwing the Kingdom in the Mists into political turmoil, she finds herself setting out on a quest she was not yet prepared to undertake for the sake of her future.... and the man who represents her family's past."

Prepare yourself. Toby has to go looking for Simon, who has forgotten everything after trading places with August, which means he's also forgotten he loves Toby, and was none too thrilled with his service to the Winterrose.* Good times! Great way for a girl to prepare for her wedding! Going back onto the Rose Road is going to be loads of fun not just because of Simon's forgetting everything but because it means that Tobes gets to go ask her liege Sylvester's angry plant-based wife Luna for assistance that Luna won't want to give. And it all puts Toby on a path to a truly stunning series of events. The outcome of these events is going to track through quite a few novels ahead and for sure there will be a great deal of drama that stems from events herein. Even just the fact that Toby promises to expand Chez Daye for someone will have wild implications.

This installment left me so happy for some of the characters I can't tell you. And it sealed my conviction that something is up with some other characters, too. Prepare for amazing things! Prepare for justice and happiness (for those who deserve it) and prepare to be amazed at what you never saw coming.

*Full confession: A big part of me was glad that Toby goes looking for Simon because what happened to him really hurt my heart. He loves both his daughters and the unfairness of being so lost was pretty raw.

I received a digital review copy of this novel in exchange for an honest review.
Read more
15 people found this helpful
Helpful
Report abuse

Amazon Customer
5.0 out of 5 stars Another great read for fans of the series
Reviewed in the United States on September 2, 2020
Verified Purchase
I have no intention of spoiling this book for anyone. If you have enjoyed following the trials and travails of October Daye from the beginning, then you should read this book. If, however, you have not, then you should start with Rosemary and Rue.

That's because this book (like the two before it) is immensely satisfying for existing readers, furthering the story while illuminating previously unknown parts of the world McGuire has built. However, it also mentions, builds on, or otherwise includes elements from previous books. While Toby does her best to signpost them in her narration (the book is told in first person), enough to remind loyal readers, I'm not sure that a complete newbie would get as much out of it.

A complication of Faerie Law makes it imperative for Toby to find and restore Simon Torquill, the Fae noble who turned her into a fish before the start of the first book ... and who also happens to be the father of her half-sister, and who is currently half out of his mind and at large as the result of ... see, even attempting to summarise the main plot driver is complicated. Suffice to say she has to find him in order to get married, and sets off on a quest that rapidly becomes far more than she had planned for.

But ignore my poor précis, and instead read this book because it has all the things that make this series so beloved: sparkling dialogue, complex plotting, multi-layered characterisation, and clever writing.

I enjoy any chance to spend time with Toby and her coterie of friends and acquaintances, despite her tendency to bleed on everything ... and this latest book in the series is no exception.
Read more
11 people found this helpful
Helpful
Report abuse

Laura118b
5.0 out of 5 stars Another great entry
Reviewed in the United States on September 1, 2020
Verified Purchase
Warning, do not start with this book seeing as it is an ongoing series.
For long time fans of October Daye, wow, so many plotlines come home to roost in this book! There are still plenty of threads to weave into stories, but this book gives ANSWERS. A few new questions from those answers, but answers nonetheless.
If you've been reading this long you're already going to buy the book, you're committed to Toby's story, but rest assured that this book is not filler to pad a contract, this is meat and bones.
Read more
8 people found this helpful
Helpful
Report abuse

Paris Bernhardt
3.0 out of 5 stars Toby and Gang Need Some New Adventures
Reviewed in the United States on October 20, 2020
Verified Purchase
I always look forward to a new book in the October Daye series. Unfortunately this one seemed to be too much description and rehashing of the past from other books to either refresh your memory or fill in a new reader. That bugged and frankly it took me 2/3 of the way into the story to get interested at all. In no way is this book up to par with most of the others. I liked the premise that Toby needed all family members to be aware of the wedding or it potentially could bring about real challenges and issues in fairy for the happy couple. From there is feels like regurgitation of past perils and events. That saddens me because I have loved the creativity of these stories and I love the characters. All of them! I do hope we aren’t at the end of the line for this series and that this was just a not so good one in a series of so many truly fun, entertaining, and enjoyable ones. COVID restrictions aren’t fun so I was really excited to see a new story in one of my real favorite series of all time. I just wished it was as good as the bulk of them. I started and put it down numerous times until I finally made myself stick it out. Should you read it if you’re a fan like me? Yes, of course you must. We all have an off day or in this case “book”. Seanan, time for some new characters, new troubles, new mysteries, and maybe a change in scenery, a wedding and honeymoon.
Read more
4 people found this helpful
Helpful
Report abuse

Lisa
3.0 out of 5 stars What happened to October?
Reviewed in the United States on September 7, 2020
Verified Purchase
****SPOILERS****
I am a huge fan of all of Seanan's books. But....for the 1st time this book seriously made me question Toby. We always see Toby reacting and running and fighting with no prep time. It's understandable for her to not be outfitted with what she needs. But - this book shows her choosing to go on a dangerous quest. With plenty of time to prepare she takes ONE knife with her, no food or water, and Quentin and May are completely unarmed. Seriously? I really hope that this is going to be addressed. Maybe her move closer to pureblood is causing her reckless arrogance? Other books she'd do anything to protect her squire, but this one she doesn't even let him grab a weapon? Hopefully the next book does better.
Read more
5 people found this helpful
Helpful
Report abuse
See all reviews

Tink
5.0 out of 5 stars October’s Journey
Reviewed in the United Kingdom on September 17, 2020
Verified Purchase
This is the fourteenth instalment involving October Daye Her life is chaos her friends loyal to the core She has had so much ups and downs over the years and at last found love with her Tybalt I patiently await the wedding and patiently await October’s next challenge
Read more
One person found this helpful
Report abuse

nlondonhousewife
5.0 out of 5 stars Strong heroine, continuing excellent storyline
Reviewed in the United Kingdom on September 29, 2020
Verified Purchase
Difficult to believe but after so many books, the story remains as fresh as ever and still has places to go.

Loved and still loving the heroine and world building in this set of books.
Read more
Report abuse

Mina
5.0 out of 5 stars Still fabulous after 14 installments - I love this series
Reviewed in Germany on September 5, 2020
Verified Purchase
Note: this is an urban fantasy series with an elaborate world building, complicated relationships and family ties and I strongly recommend to start at the beginning with „Rosemary and Rue“ and read the books in the intended order.

Review
First I have to tell you that the „October Daye“ series is one of my favorite top three and, yes, I am a fan through and through. So when reading my review, you should take that into account: Seanan McGuire can literally do no wrong for me here.

And again I loved Toby’s quest, how she dealt with it and how awesomely it turned out. It all starts harmless enough: Toby and May are mostly dealing with the wedding preparations, when Toby is made aware that she has to invite her father to her wedding or offering offense to him, his family and his line. According to faery law this would be Simon Torquill who is suffering from a curse he took over for his daughter August. She was able to find her way home and he lost it. He also lost the ability to remember that he tried to make it up to Toby and others, what he had done in the service of his First, Eira Rosynwhyr. He essentially became a villain. And yet Toby needs to find and invite him, because the consequences of Eira being able to claim offense against Toby would be bad. Really really bad.
So Toby sets out to find Simon and due to one of Karen‘s predictions, she only takes May and Quentin with her. I can’t tell any more about the plot without spoiling it, but since it is Toby on a quest things go haywire pretty soon. And there were a few really scary moments that made the story all the more entertaining. The twist in the end I did not see coming and I’m excited about the implications for the future. On Goodreads I saw that there would be at least three more books and I’m so happy about that.
Read more
Report abuse