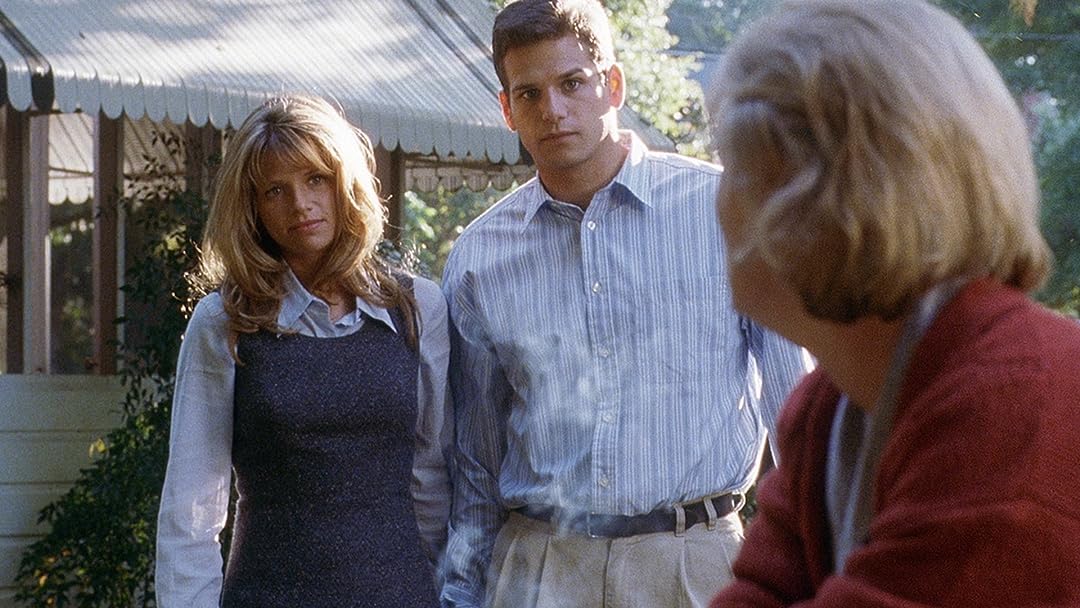 (61)
1 h 34 min19977+
A high school cheerleader suspects that her popular boyfriend is responsible for the brutal murder of a pregnant girl from the wrong side of the tracks, and, with the help of the dead girl's mother, strives to bring him to justice. Inspired by a true story.

Southern CharmerReviewed in the United States on March 7, 2019
4.0 out of 5 stars
Lifetime movie fan win!
Verified purchase
People can bash this movie all day, but if you miss Lifetime movies from the 90s... this is a GEM! I am 31 and these cheesy, yet enticing movies are a win every day. No special acting (I wasn't looking for an oscar movie), no name music, but intriguing story line.
14 people found this helpful

Tricia SloneReviewed in the United States on May 3, 2019
5.0 out of 5 stars
Love 90's movies
Verified purchase
This is worth the watch. Not fast-paced action, a little cliche' here and there but I enjoyed it. Give me 90's and before movies any day. No blood and gore, no cringe-worthy sex scenes, just simple entertainment. The cops in the movie need slapped a bit...talk about taking the easy way out and not doing their job properly.
10 people found this helpful

Amazon CustomerReviewed in the United States on June 20, 2020
4.0 out of 5 stars
Watchable
Verified purchase
Definitely nothing Oscar-worthy, but a perfectly decent night's entertainment. Good production values, decent acting from everyone except the psychologically inconsistent murderer, and the writing isn't terrible despite some poor moments. Very light, despite the subject matter, and very "human," despite the shallowness of several characters. The main character seesaws between sympathetic and unsympathetic, but she comes up OK in the end. I like her relative strength, and how she (mostly) refuses to bow to the rampant conformism. Her friends are all jerks, and her family's almost as bad, though, and they don't explore why she remains decent. More characterization would've helped, but it works as-is. The cops are hard to believe, but I know these types exist. Scary to think they're everywhere, even in critical positions like law enforcement. It crossed my mind that the lead detective dismissed evidence because of some kind of class bias...But it's not meant to be deep enough for analysis, I guess.

It's pretty typical 90's fare. I thought it was one of those old made-for-network-TV movies, but other reviewers have said it was actually from Lifetime. It also claims to be based on a true story. If so, I'd be interested to know more about that, but it doesn't mention any specifics I can look up. There were some plot holes, but nothing outrageous for that era. The murderer is not psychologically realistic, and neither are his (several) 180-degree turns. I almost never say this, but in this case, the villain truly could've used some subtler, more nuanced handling. It was like they couldn't decide between making him pure evil (first abusing, and then murdering, a girl pregnant with his own kid, and then showing luridly how he murdered and dumped her in a trash bag) or making him too sympathetic in a way that doesn't make sense of his actions. First, he's talking about taking responsibility, etc. (albeit, to help her have an abortion), and then he quickly switches to hitting and strangling her? Eh...I didn't buy it. The victim's mother makes some very insightful remarks that made me bump it up to 4 stars. The 90's were definitely gentler, more "human" times, in so many ways, and this brought back some memories, so the nostalgia factor also played a hand in my rating. :)

All in all, a fun watch when you need to unwind without getting into anything "heavy." It kept my attention and kept me entertained.

Christina ChristinaReviewed in the United States on February 3, 2021
3.0 out of 5 stars
Delivers
Verified purchase
Punky Brewster plays a girl who dates someone else’s boyfriend unknowingly, gets pregnant by him, and when he finds out she’s having his baby, he kills her. His real girlfriend begins to suspect that there’s something going on with her boyfriend, but this is long after she befriends the mother of the missing (dead) girl.

There are so many problems with this movie. I feel horrible for the victim and her mother, of course, but that doesn't change the fact that the victim is really unlikeable and unbelievable. How could Emily (Frye) not realize she was the "other woman" when she'd been with this guy for four months, had been sleeping with him and, yet, had never met his family or friends? In fact, he only ever took her to some rundown warehouse in the middle of the woods. Are 18 yo girls really that naive? Not that she deserved to be killed. Greg was a horrible, two-timing boyfriend turned murderer. And I could buy that an entitled jerk like him would do something like this. But it's hard to believe Emily is for real. Nor did I believe she would have fought so hard to keep a creepy guy in her life to the point where he felt backed into a corner. Frye plays her as delusional, perhaps slightly psychotic. Getting to see a little bit of what he did to woo her and overcome her cynicism would have helped a lot. As it was, the drama between them felt more like a paint-by-numbers conflict to get us from point A to point B.

The long-term gf of Greg is a sweet little innocent. But, at times, I question her motives as well. When she and Greg hit a rocky patch, why didn't she tell her parents the truth? Why was she so coy about it? Why cover for him?

And don't even get me started on gf Nicole's stupid, shallow friends.

I know stuff like this happens in real life. I just didn't buy the characterizations. They felt very two-dimensional.

But, ultimately, it's still something I like to watch every now and then. It delivers exactly what it promises. And nothing more. It's full of tension. Also, the friendship between Nicole and the mother Tina is sweet.

ChrisSherrillReviewed in the United States on October 11, 2019
3.0 out of 5 stars
So-so
Verified purchase
Other reviewers say that this is a made for TV movie. It’s not bad, but it falls well short of very good. The production values are okay; again, feeling like a canned, Lifetime movie. The acting was only adequate. The shallow rich kids are not believable as they turn on their former bff, Nicole, and thirty seconds later, they’re best buds again. The evil boyfriend, Greg, seems to be truly capable and ready to strangle Nicole just as he did hapless Emily, but love wins out. Ahh. I didn’t find the story/plot that believable, and the police could have taken pointers from the Keystone Cops, and to make it worse, Nicole walks out of the police station with an evidence folder? Did she do time for that? Can’t buy it, not even in 1997. This one is a snoozer; one you might save for a rainy day when you don’t have anything else to do.
2 people found this helpful

electroaddictReviewed in the United States on October 5, 2018
2.0 out of 5 stars
Worst cops ever???
Verified purchase
This is a pretty average (and forgettable) little drama flick from 1997. Emily (Soleil Moon Frye) gets killed, and Nicole (Ari Meyers) has to solve the crime... because the cops are completely inept. Seriously, that's the ONLY reason this storyline is able to reach feature-length. The cops conduct an extremely short and incompetent investigation. They casually dismiss personal statements from key individuals and ignore hard evidence... also, they apparently don't believe in DNA testing! Therefore justice falls squarely into the hands of a teenager who just barely graduated high school. Certainly not quality entertainment... but it does pass the time if you're really bored.
6 people found this helpful

SBC97223Reviewed in the United States on May 15, 2021
4.0 out of 5 stars
Solid Plot, Good Attention to Detail, and Identifiable Characters
Verified purchase
The Killing Secret (1997) is a much better movie than I expected. It was thoughtfully paced and gives enough time to examine some of the exploitative relationships we either expect or allow and makes a solid case to fight to escape those. Watching parts of this as a coming of age drama with a bit of suspense certainly drives home the idea that some quick decisions have horrendous ramifications. The movie does drive home the idea that there is a bit of presumption of regularity associated with increasing economic status. The week point is the cops missing some essential clues, but some of those clues were initially quite unknown to the holder of the clues. So as we get more reveals, the story moves along well. I was prepared to watch the first five minutes and go on to something of higher production value. I am glad this one caught me as it was worth the watch i the end. And, all the lose ends were tied up. THANKS!

JanReviewed in the United States on July 4, 2020
5.0 out of 5 stars
A Kiss Before Dying
Verified purchase
I loved this movie which reminded me of Robert Wagner's A Kiss Before Dying with the same plot. I think the characters are believable for the era: the constantly beaming, charismatic, cheerleader; the horny, spoiled captain of the football team; the giddy, rambunctious rich kids and the long-suffering mother of the victim who works as a waitress.
The girl who ends up pregnant and then murdered obviously romanticized the relationship way beyond it's reality. The boy never said he loved her or took her on real dates or to meet his friends and family. He offered, even insisted on paying for an abortion but she chose to keep the baby, promising him that their lives would be great.
This movie has a satisfying and appropriate ending. I enjoyed it, loved it.
See all reviews
Back to top
Get to Know Us
Make Money with Us
Amazon Payment Products
Let Us Help You
EnglishChoose a language for shopping. United StatesChoose a country/region for shopping.
© 1996-2021, Amazon.com, Inc. or its affiliates