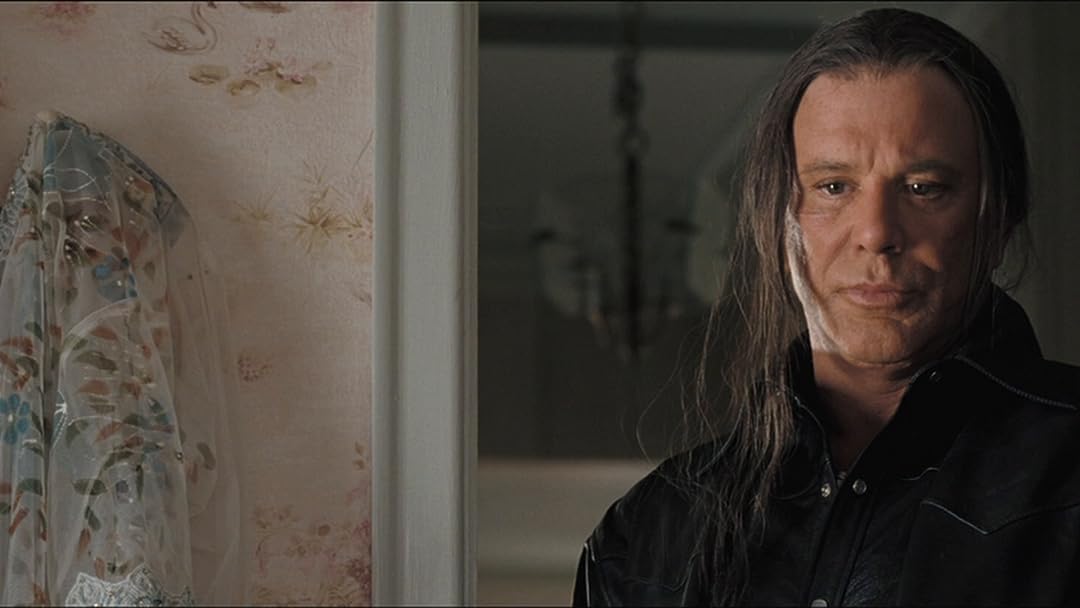 (264)6.01 h 35 min2009R
An experienced hitman and his unhinged young partner target a blue-collar couple who have entered Witness Protection after witnessing an extortion scam gone wrong. Based on the novel by Elmore Leonard.

Leaves MovieSphere in 13 daysRentals include 30 days to start watching this video and 48 hours to finish once started.

old fat guyReviewed in the United States on January 17, 2021
5.0 out of 5 stars
Mickey Rourke is great in this movie.
Verified purchase
As the headline says, Mickey Rourke gives a great performance in this intense movie. In fact, all the cast members are very good. The only complaint I might register is that one has to suspend disbelief a little more than for similar stories, but the movie keeps things lively. It has become one of my favorite movies -- mostly because of the great acting all around.

Laser PointReviewed in the United States on May 31, 2009
5.0 out of 5 stars
Mickey Rourke steals the show
Verified purchase
Armand "Blackbird" Degas is a half-Indian hitman for the Toronto mafia. At a certain point while he is on the run he crosses paths with an ordinary couple played by Diane Lane and Thomas Jane. He believes that he has to kill them because they have seen his face and know that he is in the Agonac area. The movie traces the counterpoint between the couple who are coping with marital problems and the hitman who is attempting to elude the law.
There are several good performances by Joseph Gordon-Levitt,Diane Lane and, particularly, Aldred Montoya as Lionel, an indian who doesn't want Armand back in the area. However the performance that is absolutely riveting, is that of Mickey Rourke as the hitman. His performance is so superior that by itself it moves a good movie to one worth watching more than once for the complex psychological portrait constructed by this very excellent actor.
5 people found this helpful

Scott VannatterReviewed in the United States on October 11, 2009
5.0 out of 5 stars
There's no one like the old ones
Verified purchase
I love the plots of the older movies. What's more, I love the older actors/actresses at work in what they do best: plots of older movies. Now, "Killshot" is not exactly an "old movie" at all; however, it has all the components of an "old movie": Great plot and great people doing the acting and, apparently, the directing and everything else to boot.

I have been a long-time fan of both Diane Lane and Mickey Rourke. I think I would rather watch and listen them read their grocery lists than watch a modern-day movie with a bad plot and poor acting. Elmore Leonard also writes good books. Man! Put all of that together along with some really decent supporting actors and you have the ingredients for 95 minutes of great suspense. And they pulled it off in an excellent fashion!

I won't give away more of the plot than the trailers show. Suffice it to say that they managed to do in 95 minutes what a lot of today's films (and I like today's films, too) can't manage to do at all: Keep the suspense, action, and thrills going without having to show someone's brains splattered all over the room. There's blood, but then, there's BLOOD! The director managed to shrug off the need for gore and concentrate on the plot instead. Good for the director! The actors/actresses managed to do everything they needed to do without over-acting their parts. This is, in my opinion, what a group of actors who have been in the business for awhile can do with almost perfection. This group managed that.

If you want to watch parts of bodies, knife-slicing, and general gore, watch something else. If you want to be entertained and be nervous, watch "Killshot".

xDebxReviewed in the United States on December 17, 2020
2.0 out of 5 stars
B movie at best
Verified purchase
Waste of money and time. Sure don't understand the reviews on this one.

sue owensReviewed in the United States on September 22, 2013
4.0 out of 5 stars
Killshot
Verified purchase
I liked this movie. Mickey Rourke played the role of an American Indian Hitman. He had ethics, though and I really thought he nailed the character. That didn't really surprise me. He was hired to kill Diane Lane who had witnessed a robbery and murder that went bad. She was placed in the witness protection plan that didn't work out very well. Lots of interesting twists in this plot. Amazon.com always makes ordering so easy and shipping is fast. Any questions? Will be happy to answer.
3 people found this helpful

CheriReviewed in the United States on January 9, 2020
5.0 out of 5 stars
Good shape, fast shipping
Verified purchase
Husband likes it. We saw the preview on another movie and I was able to surprise him with it.

ennuiReviewed in the United States on June 15, 2009
4.0 out of 5 stars
Excellent performances
Verified purchase
The other reviews have covered the plot points fairly well, so I don't have a lot to add. For me, this DVD is somewhere between 3 and 4 stars; it's a good movie but I wish they had included the deleted scenes. Excellent cast, great performances -- Joseph Gordon-Levitt almost, but not quite, steals every scene he is in. I really liked Aldred Montoya, too. And of course, Mickey Rourke -- he is a master of the subtle touches that breathe life into characters.
One person found this helpful

JohnnyReviewed in the United States on November 18, 2018
5.0 out of 5 stars
Not an oscar but worth watching
Verified purchase
This movie is pretty good, not a box office buster but worth a watch.
See all reviews
Back to top
Get to Know Us
Make Money with Us
Amazon Payment Products
Let Us Help You
EnglishChoose a language for shopping. United StatesChoose a country/region for shopping.
© 1996-2021, Amazon.com, Inc. or its affiliates