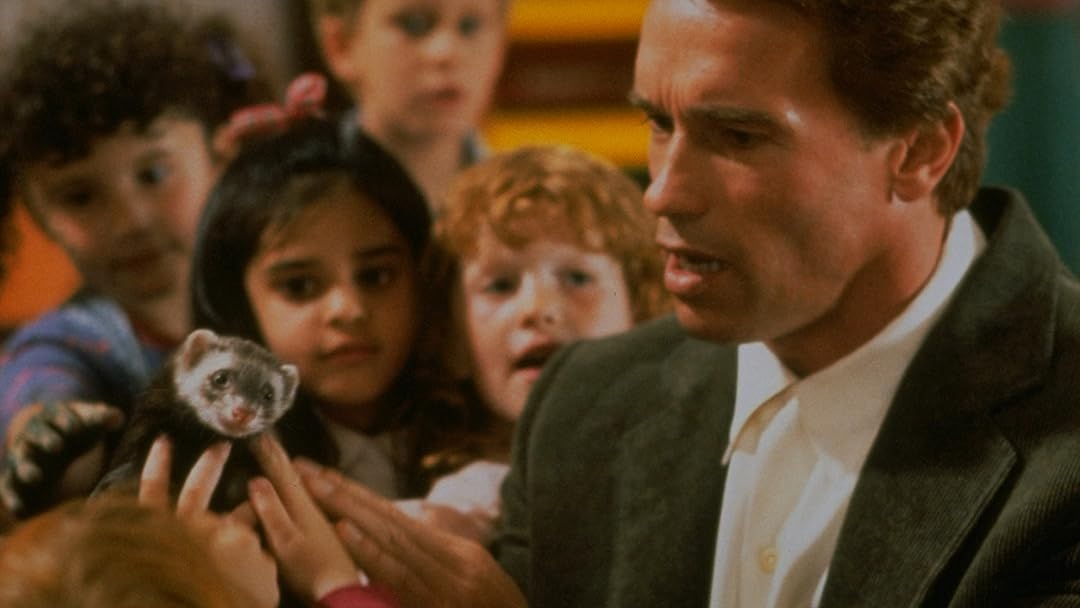 (5,938)
6.21 h 51 min2021X-RayPG-13
A tough cop (Arnold Schwarzenegger) is given his most difficult assignment: masquerade as a kindergarten teacher in order to find a drug dealer.

JReviewed in the United States on August 6, 2020
5.0 out of 5 stars
Cancel culture is attacking this movie.
Verified purchase
“Boys have a P, girls have a V”
And that’s why cancel culture hates this movie. Also because it shows a strong man as the main character and he’s a police officer. Why does the left have to inject their politics into everything? This movie is a classic, great movie.
38 people found this helpful

BrandiReviewed in the United States on September 20, 2016
5.0 out of 5 stars
Funny, heartwarming, and good action
Verified purchase
So I'm watching KINDERGARTEN COP in a bit of a stupor because the remote control is too far for me to reach when I suddenly realize something amazing: This movie is fantastic.
In the calculus of Hollywood dreck, KINDERGARTEN COP doesn't add up. Take 1 muscle-bound action hero, a dozen too-cute kids and a plot so contrived it makes an episode of any television sit-com look downright plausible and you should have a mess fit only for release straight to video in Third World nations--do not pass "Go" (or your local metroplex) or collect $200. In fact, I would love to meet both the person who pitched this idea and the studio head who gave it the green light:
Pitchman: "Imagine MARY POPPINS without the namby-pamby animation and music and twice the butt-kicking! Oh, and instead of Dick Van Dyke faking a British accent we'll have Arnold Schwarzenegger faking intelligible dialog!" Studio Exec: "I love it! Here's umpteen million dollars to get it made!"
And the freakin' movie works! It really does. The script is filled with some great lines (My favorite, of course: "It's not a tumor!"), sweet characters and some low-key acting from the principles that keeps the story from becoming maudlin. This is one of maybe three movies I can think of that I would be comfortable watching with my parents, minor relatives or beer-drinking buddies. (Coincidentally, another one of the three is GHOSTBUSTERS, also an Ivan Reitman flick.) It has bloodless action, quotable lines and an ending that is satisfying. It just shouldn't exist. Maybe the fact that it does exist proves the William Goldman line about Hollywood: "Nobody knows nothing."
Take some advice from your Uncle Guy: If you're stuck with the kids or a date you don't know and you need to sit at home and watch a movie, put in KINDERGARTEN COP. You won't be disappointed, and you just might like it. And this advice comes from a big curmudgeon.

MICHALE MReviewed in the United States on March 15, 2018
4.0 out of 5 stars
It's not a tumor!!
Verified purchase
I'm a cop you idiot! I'm the party pooper. We're going to play a game, the game is called 'Who is your daddy and what does he do'?

I had seen this movie when it came out 2+ decades ago. I made the decision to show this to my four year old without watching it again first. Not such a great idea. For one, it takes a good 20-30 minutes of setup before the school setting happens and even then some of the kids say some things I don't want her hearing yet, like "my dad is a gynecologist and looks at vaginas all day".
Luckily my kid fell asleep. I watched the whole thing and laughed a lot.

One thing worth mentioning is the volume is super low. I had to crank up my volume to the 40s (about double what I normally have it on) and it was still pretty low.

MC PhillipsReviewed in the United States on September 21, 2016
4.0 out of 5 stars
Fund old comedy!!
Verified purchase
Although this wonderfully silly comedy is a bit dated, it's still worth a watch. Even though the premise is a bit sketchy by today's standards, it's an engaging story with plenty of laughs and good actors. The basic plot: A tough LA cop has been trying to catch a drug dealer and murderer for years and when he discovers the location of the bad guy's estranged wife (who supposedly stole $3 million from her hubby) & son, he goes there to try and find them and solicit testimony to put the bag guy/her hubby away. He has to pose as a kindergarten teacher, b/c his partner (who was supposed to do that) gets sick. Hilarity ensues and he finds the wife & son, but falls for the wife and has to protect them from the bag guy/hubby, who has also discovered where they are. The best scenes are, by far, those Arnold shares with the children. He was fairly young himself when this movie was made and that adds to the film; he's clearly at sea when it comes to dealing with all those little kids. Penelope Ann Miller is very nice as the estranged wife; Pamela Reed is very good as Arnold's partner (and a great comic foil); and Linda Hunt as the school principal is, as always, great. Carrol Baker (of Baby Doll fame) brings a heavy presence (and lots of creepiness) as the bad guy's mom.
7 people found this helpful

Lilacs &amp; RosesReviewed in the United States on January 15, 2018
5.0 out of 5 stars
Funny, not your normal cops & robbers movie!
Verified purchase
He is going after the bad guy & needs to find the wife & kid so he can capture him. Trouble is, he doesn't know which child is the right one. So he goes undercover in an elementary school in Astoria, Oregon as a kindergarten teacher. He'd rather be in shootouts with bad guys than deal with these kids with runny noses & potty problems! But he begins to be attached to the little rugrats! It's really funny! And just a bit of trivia... if you ever go to Astoria, they have a map of all the locations for different movies like this & Goonies. It's kinda fun to see the actual locations.
5 people found this helpful

Carolyn L. PerkinsReviewed in the United States on April 15, 2021
5.0 out of 5 stars
Still Resonates As A Family Film!
Verified purchase
No matter how many times I've seen this movie, It still makes me laugh. Also, the fact that through the years I've shared it with my grand kids and other little ones when they come to visit, it still resonates as one of the most endearing film of our times.. This was indeed Arnold Schwarzenegger at his best! This one and "Twins" with Danny Devitto. It's also the safest film to let kids see without too much gore from violence or sex.
One person found this helpful

joel wingReviewed in the United States on July 28, 2021
3.0 out of 5 stars
Not as funny as I remember it but a good family film
Verified purchase
Kindergarten Cop was the second attempt to change Arnold Schwarzenegger’s image as a muscle bound action hero. It starts with Schwarzenegger looking and acting like The Terminator. Next thing you know he’s undercover playing a kindergarten substitute teacher. Most of the movie is about Schwarzenegger trying to get control of a class of little kids by doing things like telling them there’s no more bathroom breaks. He does a great job with the role but it’s not as funny as I remember it. It's still a nice family film.

teols2016Reviewed in the United States on June 16, 2014
4.0 out of 5 stars
Arnold Schwarzenegger? With Kids? Really?
Verified purchase
Despite how weird this premise sounds, it actually works and can be considered one of the Governator's better films. A workaholic LA cop must track down the ex-wife of a murderous drug dealer before the latter accomplishes the same goal for more sinister reasons. The search takes this cop and his new partner all the way to Astoria, Oregon, where the ex-wife and son are believed to be hiding out. Through a set of somewhat hard-to-believe circumstances (really, no background checks?), Arnold becomes a substitute kindergarten teacher as he attempts to figure out which of his new charges is the little boy he's looking for. Okay first off, thank you for, despite the main character being a cop in Los Angeles, not keeping the film in Los Angeles...it's been done. The fish-out-of-water situation was enjoyable, though you did have to suspend your disbelief just a bit here and there. All the actors fit well into their roles and I actually found the film's climax worth watching...not an easy feat for an Arnold Schwarzenegger film. If you are a fan of the (now former) Governor of California and one of Hollywood's most well-known action stars, you definitely need this film in your collection. Like I said, I actually liked it. Enjoy.
4 people found this helpful
See all reviews
Back to top
Get to Know Us
Make Money with Us
Amazon Payment Products
Let Us Help You
EnglishChoose a language for shopping. United StatesChoose a country/region for shopping.
© 1996-2021, Amazon.com, Inc. or its affiliates