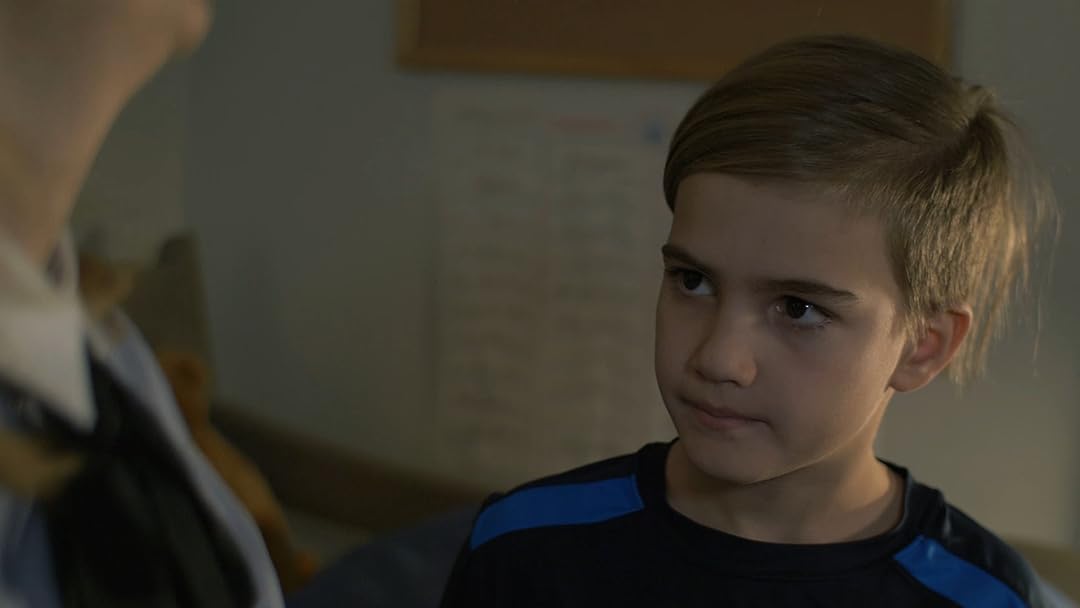 (156)
6.91 h 42 min20187+
A little boy named Lincoln, who is bullied for the way he talks, creates a superhero in his head. A lonely man rescues a puppy who transforms his life and falls in love. This inspiring story illustrates how kindness can truly make a difference. From the creator of the hit faith and spirituality movie "A Box of Faith" comes this family movie of inspiration.

SixtusReviewed in the United States on September 14, 2019
5.0 out of 5 stars
Sweet Movie...A Dog's Love Brings Together Family
Verified purchase
Kindness Matters is a really sweet movie about people who are ultimately brought together into a family through their shared love of a dog. Scruffy/Dingo was a little puppy found in a discarded box. I like how the story also gives the dog a "voice," that is a unique point of view for this type of film. The story details how Hudson, a lonely former high school football star, and Lincoln, a little boy with a speech disorder are changed through kindness. The kindness comes in forms that are unexpected such as a stray dog or a nanny that answers a job ad. The movie was a bit slow moving at first, but hang in there, the ending is very sweet and is worth it. Hudson's mother is great with her constantly trying to set him up on blind dates. The only part that made me angry was Lincoln's dad giving the horrible ex-wife another chance. She was just one nasty individual, and he clearly had a lapse of judgement in letting her back in the door, but in the end I saw how that was a necessary part to bring the entire story together. This is a clear, family oriented film that has a message of faith in God's plan for life, but is not overly preachy. Overall, a nice evening of entertainment.
16 people found this helpful

Dawn T.Reviewed in the United States on May 31, 2020
2.0 out of 5 stars
Dingo or Bingo? Scrappy, Scruppy or Scruffy?
Verified purchase
What a movie. WHAT A MOVIE. If only there was a place to start. I don't have the time to talk about everything that so clearly needs to be addressed, so let's cover the most important part, the glue that holds this movie together, and the character that shaped the whole movie and was the cause for the biggest defining moments in nearly every other character: the DOG. Not only does this dog look like the creepiest dog you've ever seen in your life with legs that can reach the moon, his thoughts are just as scary. Apparently being a smoker, his voice is damaged and only speaks in hushed tones. If his voice doesn't make you want to plug your ears while throwing up, I'm sorry but we can't relate. Even still, that horrifically terrifying dog voice seems to be the only clarity that we actually get in this movie. Half the time you have no idea what's going on until this deadly looking/sounding dog speaks up and fills in the gaps of the plot that the actors fail to portray. Yet the confusion continues when the actors fail to remember the dog's stage name and continuously interchanges that with his real-life name. The only way to know what his name is supposed to be is when the extremely sensitive, overly attached, unkept man carved the name "Scrappy" in a rock as a memorial to him. The honor that this man gave the dog fades when you realize that the disrespect of not remembering his own dog's name when he was thought to still be living greatly outweighs any memorial with his real name on it. Not that I think that this dog deserves much honor. Even the actors are aware of his freakishly long legs and I quote a real quote from the film, "Well, there's no denying those legs." AND THERE SURE ISNT. In summary, this is just about the strangest movie I've ever watched and I hope I never have to hear such a disgustingly strange voice coming from a dog's head again. I just wonder where Scrappy, Streppy, Stuffy (or whatever his name) ended up now. I hope that that dog will stop using stilts as I truly believe that he will find that normal legs work perfectly fine.
4/10, would only recommend this movie to somebody I don't like.
8 people found this helpful

Jackie MReviewed in the United States on March 29, 2020
4.0 out of 5 stars
Clean movie -- our kiddos enjoyed it!
Verified purchase
Our kids 9 and 8 y.o. enjoyed it. It's a bit too long for me (which is why I rated it 4-Stars). But our children enjoyed it. My husband and I had to pause the video for several teaching points. Spoiler Alert!! Stop reading if you don't want to know parts of the story. For example 1) Lincoln shouldn't have just gone after the dog and not let his sleeping Dad know. 2) the mother of Lincoln shouldn't have given Scrappy away to a complete stranger in the park. Our kids already know not to do these things, and these served as good reminders and teaching points.
6 people found this helpful

Yuki A.Reviewed in the United States on August 21, 2020
4.0 out of 5 stars
THE ***DOG*** WAS THE BEST ACTOR ON SET! #impressive
Verified purchase
Low budget movie, some cheesy moments, some obvious 'acting' (man's older mother) but a sweet story nonetheless. The little boy was surprisingly good although his stutter could have been better - his emphasis was on the wrong words (probably the director's fault for not coaxing a better take). And the little boy's mom was completely believable and the best grown up actress out of the group.

But mostly, I was SERIOUSLY IMPRESSED with Scrappy's acting abilities! I have no idea how it was done but the range of emotion that little dog displayed was AMAZING. From his unbridled joy at seeing his dad again all the way to his "I'm depressed" expressions. I would recommend just to see this canine's acting. :)

JeffReviewed in the United States on February 11, 2019
5.0 out of 5 stars
Very Good Christian Family Film
Verified purchase
Much better than Box of Faith. The Director and Producer keeps improving in his storyline and theology. Instead of portraying God as a genie-in-the-box (who literally lifts letters into heaven on a nightly basis, granting all honorable requests quickly, just as requested), this movie shows how God rescues his people in far more subtle ways. The focus is on charity, love, family, and friendship, rather than on a name-it-and-claim-it faith. The acting in this low budget film is also quite good.
12 people found this helpful

K R TReviewed in the United States on September 9, 2018
4.0 out of 5 stars
Strong 4 starts for the story. !!
Verified purchase
The story is about broken or unconventional families. Sure, it may be slow at time but it is like a hallmark type movie not high budget. The character of the mans older mother was sweet but not great acting. The boy was the best actor, fantastic. Do not watch if you want fast big budget, this is a good film with a sweet heartwarming ending.
12 people found this helpful

Barbara MReviewed in the United States on December 14, 2019
5.0 out of 5 stars
Heartwarming and touching movie
Verified purchase
I really liked this movie !! I searched under "inspirational" because I was feeling sad, lonely ,and I recently had to put my dog to sleep, due to serious illness. I needed a good movie to cheer me up!!! This movie provided that and more... If you love dogs, and believe in miracles--- this is a good movie. It is about kindness, but it touched my heart because it was also about real life struggles. The dog helps bring people together and much needed healing for everyone. (except the boy's mother, that is...) Hope you like it as much as I did. :)
7 people found this helpful

Gary J. HeffnerReviewed in the United States on September 2, 2018
5.0 out of 5 stars
Sweetest and kindest movie of the year!
Verified purchase
What a great find on Amazon Prime! Sweet, engaging, and nothing but good news all the way through. Just a couple of surprise detours to make it interesting but a great movie.
15 people found this helpful
See all reviews
Back to top
Get to Know Us
Make Money with Us
Amazon Payment Products
Let Us Help You
EnglishChoose a language for shopping. United StatesChoose a country/region for shopping.
© 1996-2022, Amazon.com, Inc. or its affiliates