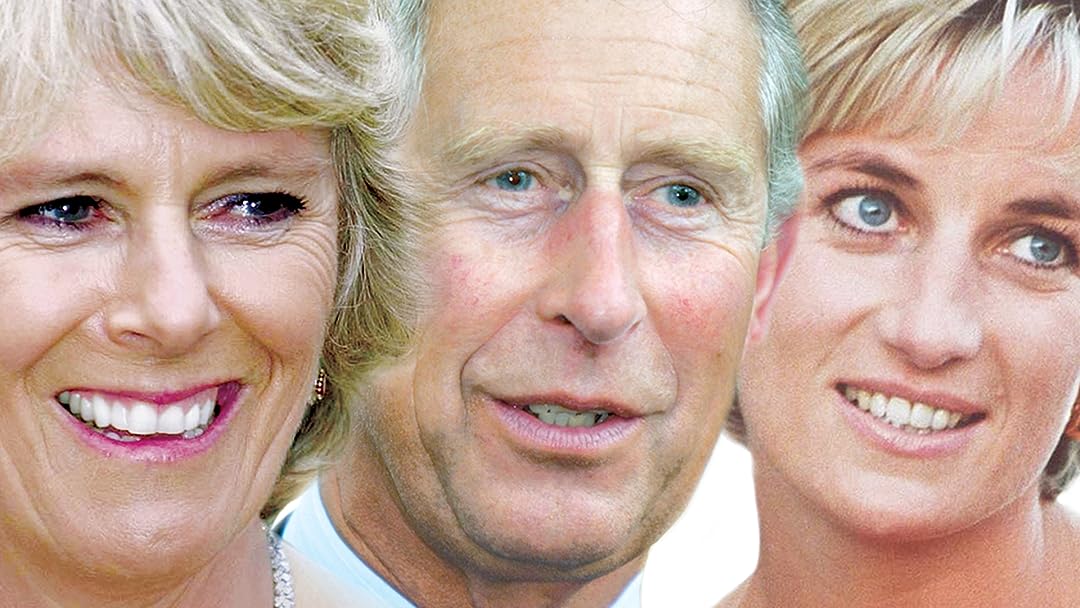 King Charles and Queen Camilla: Into The Unknown

Included with True Royalty on Amazon for $5.99/month after trial

Watch with True Royalty
Start your 7-day free trial
Add to
Watchlist
Redeem a gift card or promotion code
By ordering or viewing, you agree to our Terms. Sold by Amazon.com Services LLC.
Write review

Geri AReviewed in the United States on December 11, 2019
4.0 out of 5 stars
Over all its worth the watch.......
Verified purchase
........ even though many statements & opinions are &/or turn out to be way off. The one that really upset me was Judy Wade. She said that many times Paul Burrow (sp?), the Queen's top footman who moved up to Diana's butler & friend, would never betray Diana & then did with his tell all book to cash in & make money & did betray her in the process. There's a glaring argument to be made for Paul & it is as follows:

To Judy Wade:
Paul said numerous times he would have taken it all to his grave had not Prince Charles (🐔💩) not have had him arrested, his home torn apart with a court battle that lasted over a year, which was halted & charges dropped when the Queen remembered that Diana entrusted him, should something happen, to remove certain item & sensitive docs, letters,etc. from her home & to protect them. They not only took those, when dumping ever drawer & cloet, etc on the floors, they even took all the gifts she'd given him over the years! He had all of these things in his attic, if he was out to make money, he would have been selling them off piece by piece & making millions, but he was not! If 1 good picture of her was worth $500k+ or more, what do you think her private papers, letters, journals, notes,etc after she was gone would be worth? They were a priceless gold mine & he didn't sell or betray her once! Charles & gang did that by hanging him & then leave him in major debt! Quick to accuse, no help fixing what they caused, walked away with Paul's life in ruins. I don't blame him at all!
? Question: Why did it take the Queen over a year to remember? She knew Paul very well, he was her personal valet for 14 years, being together all day & forming a closeness few have. Just putting out there to ponder. I still love her, but it's just odd to remember so long afterwards...... has me a little perplexed is all....... discuss.

Everyone knows & it's said in this documentary that servants of the Royal Family are very under paid & Paul had huge debts all because Charles wouldn't meet with him to ask why Paul had these items before all the ugly happened & instead went nuclear ugly, by having him arrested, dragging his name & reputation though mud, then after a year of LEGAL BILLS, FEES, FINES, BAIL, etc, which were over $2,500,000.00+ in US$ (which the RF, would not pay after it was their screw up, never mind what they emotionally did to him for over a year).

He had nothing & was going to loose his family's home, everything & file bankruptcy. Plus he had 2 small children he had to care for at that time He had no choice, the very people & institution he was protecting, royally screwed him (pun intended). He had to make a huge amount & fast! Don't judge a man until you've walked in their shoes! I don't blame him for writing a tell all, in which his love for Diana shows. The majority of his "tell all" is about himself, the arrest & hearings, in which Charles' was guiding & hell bent on bringing Paul down.

Long story short Ms. Wade, you are wrong! Paul is not greedy, he did what he had to do. To protect his family, pay huge debts when the crown left him hanging surrounded by a pile of debt with no other way out. I truly believe Diana would of in fact has forgiven Paul, because when no one was listening to her she did the same thing with "Diana, Her True Story". If not for what they put him through, I honestly believe we'd all be saying Paul who?

Update: Paul with now ex-wife and his two grown children, are very close. In fact his ex is still a best friend & they all accept him since he came out of closet. He now has a hubby & owns village flower shop away from London & occasionally does freelance guest appearances. Finally all is good for him, & unlike you Ms. Wade, I don't blame him for what he had to do & wish him & his extended family all the best!

If you agree, please click on helpful key. THANKS!😊💕

E. M. `Antonia L.Reviewed in the United States on July 18, 2020
3.0 out of 5 stars
Never allow Camilla Parker Bowles to be Queen! She is a destroyer only!
Verified purchase
The adultress, especially someone who aspires as a young girl to become an adulterers, should never become queen. She is clearly underhanded. She should never become Queen of the Commonwealth or any aspect of it. Both Charles and Camilla Parker Bowles betrayed their spouses. Both cheated- with whom and how many is unknown! Ick!!! Diana promoted health, beauty and humanity, truthfulness as well. She wasn't perfect, however she did a fine job as a mother and for her country. CPB has done naught but bring down standards. William should be king - not his amoral father. If not for Diana, William and Harry would be just like their father. Princess Diana was worthy of being a Queen - Camilla is only worthy of being what she aspired to the eternal mistress of an ancestor of her breathe and mother and the horsey woman she definitely appears to be keenly fond of year in and year out. The Queen of England should not be succeeded by such a damaging person as CPB!!!
WORTH watching for history of the golddiggers history.
10 people found this helpful

blueiis0112Reviewed in the United States on July 26, 2020
5.0 out of 5 stars
The future of "King" Charles with Camilla
Verified purchase
This documentary is a decade old, but a more recent church service attended by the Queen shows that its contents is still accurate. That Charles' PR team is lying to the British public about Elizabeth's true feelings regarding Camilla. It has been marketed that Elizabeth has changed her stance about Camilla being in the family. This documentary says that Elizabeth is not happy with the addtion. I remember seeing a broadcast of a church service that Elizabeth attended where the clergy waited in the vestibule for the family to arrive. Each member arrived and were greeted and stayed in the vestibule for Elizabeth to arrive. When she did, they formed a line with the clergy being first and Camilla being next to last next to Charles. When Elizabeth got to Camilla to shake her hand, Elizabeth walked right by her and ignored the hand. It spoke voumes as to how Elizabeth feels about Charles brought Camilla into the family.
5 people found this helpful

Glama PussReviewed in the United States on September 21, 2020
3.0 out of 5 stars
Older but for the most part still factual BUT...
Verified purchase
Interesting to watch this in 2020. I agree with the reviewer who defended Paul Burrell, he never betrayed Diana, even Harry Windsor as Pr H called himself early on in twitter days liked him and kept up on Paul's selling teddy bears. But Camilla was a scourge to the monarchy then and still is imho. (Perhaps Diana's death was An Unlawful Killing, ahem?) I agree with what Diana said in one of her interviews, that Charles will never be King. I watch some of the vids on the Markel's and there's yet another 'intruder' into the RF that is trying and winning at destroying the monarchy. Not that I as an American wish to see it continue as more than a tourist attraction. As the narrator says it is very much a soap opera to us now, where once there was a beautiful Princess leading it into the new century and modernizing it. Charles and Camilla certainly are suited to each other in their materialism. That part was pointed out Very Well in this doco. Did not care for the narrator's voice at all however, quite grating. Fair way to kill 50 minutes but hardly the best on this very dividing subject.
2 people found this helpful

LJSReviewed in the United States on December 13, 2020
2.0 out of 5 stars
Very dated
Verified purchase
This video was made around the time of Charles and Camilla's marriage. Fifteen+ years have passed, and none of the assertions -- such as the British public will never accept Camilla; that Camilla does no charity work except for one osteoporosis organization, just to name two -- have proven true. Today Camilla is one of the most popular members of the royal family, due to her grounded, unpretentious manner; highly-developed sense of humor; unwillingness to play coy for the camera; and lack of desire to upstage the Queen or Charles. Clearly, she and Charles are very contented in their marriage. Unlike her predecessor, Camilla is not a neurotic attention-seeker trying to persuade everyone that she's Mother Teresa -- thank god for that and that the British people appreciate it.
2 people found this helpful

Kathleen McBrairReviewed in the United States on April 1, 2017
4.0 out of 5 stars
What Happens to the Monarchy with King Charles?
Verified purchase
While this was not a high-tech production, with a slightly tabloid feel to it, I thought the content and debate were relevant to the problems facing Charles as potential king. Charles has never been a very popular royal, and this marriage adds more ballast. The fact that Parker-Bowles' ambition was to follow in ancestral footsteps to become a royal mistress says a lot about her character. Neither she nor Charles seem to have the character necessary to be ruling monarchs; and I agree that if he ascends to the throne with his new wife, it will again threaten the existence of the monarchy. He has the coolness of his mother but none of the dedication or respect for tradition. I think that mediocrity and a huge tab to the taxpayer for his lavish spending habits and overstaffing is pretty much what could be expected of him. As far as Camilla, she seems to have little interest in politics or charity and looks frumpy in even designer clothing, so the question remains what exactly she will have to offer other than bringing upon Charles further disapproval.
13 people found this helpful

Paul SterneReviewed in the United States on September 10, 2020
3.0 out of 5 stars
Made in 2004
Verified purchase
This documentary was made just before Charles and Camilla got married, so it's not very up-to-date.
One person found this helpful

Rebecca LangReviewed in the United States on September 18, 2021
4.0 out of 5 stars
Seems these stories r most likely to be true!
Verified purchase
All Good!
See all reviews
Back to top
Get to Know Us
Make Money with Us
Amazon Payment Products
Let Us Help You
EnglishChoose a language for shopping. United StatesChoose a country/region for shopping.
© 1996-2021, Amazon.com, Inc. or its affiliates