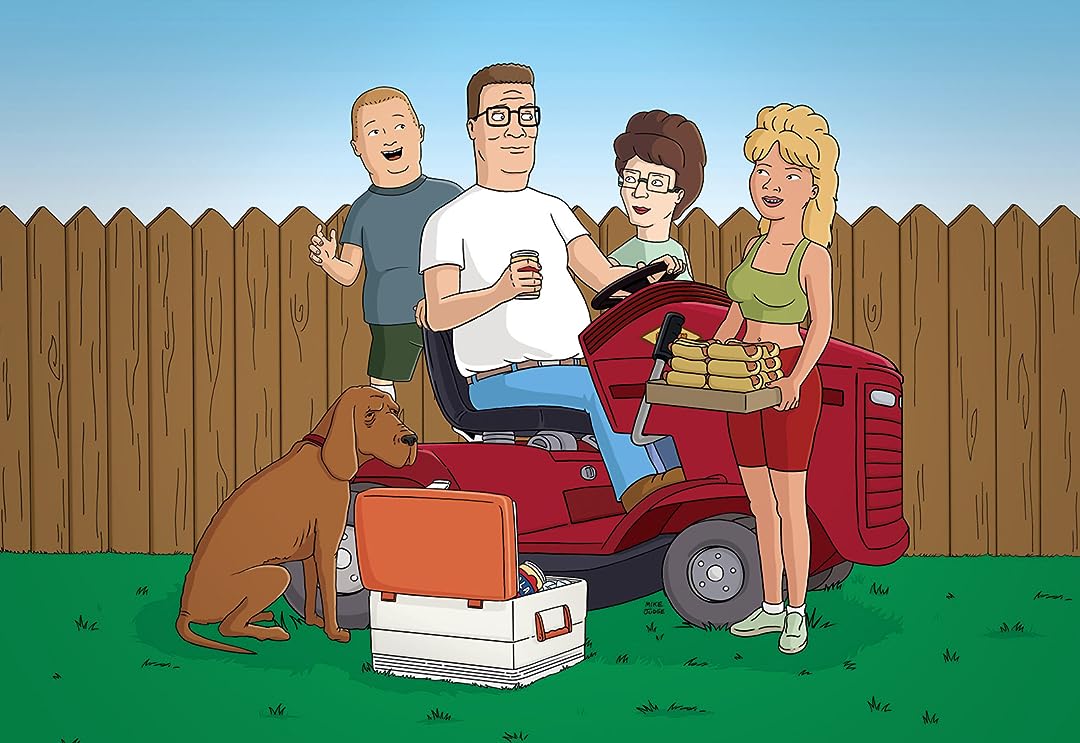 King Of The Hill

(538)7.32002TV-PG
A half-hour animated comedy that follows the to-day activities of Hank Hill, his family and neighbors in a suburban Texas town.

NichelleReviewed in the United States on June 29, 2019
5.0 out of 5 stars
Awesome season
Verified purchase
King of the Hill season 6 is one of my favorite seasons, so I just had to get it before they were gone! Some of my favorite episodes are in this season. Bluegrass is always Greener is one of them and another one is Returning Japanese part 1 and 2. Those are just some of the episodes I can name off. These episodes were kind of silly. It does have a lesson to them though. If you like King of the Hill and want to add the show to your collection, well, get all of the seasons including this one! Especially if you are into collecting old shows. This show is great.
2 people found this helpful

Vito MilatzoReviewed in the United States on March 19, 2019
5.0 out of 5 stars
Great show for anyone into comedy
Verified purchase
Such an excellent show, one of the best-of-all-time in my personal opinion. Filled with laughs that address the times it was made in, it can be appreciated by both adults & children alike. Anyone who grew up in the 2000s should have an appreciation for this show which brings a level of nostalgia to the table. Written, produced, & directed by some of the same people responsible for the American-version of the "The Office," if you like this show, you'll love "King of the Hill."
One person found this helpful

Brayth YourselfReviewed in the United States on February 9, 2017
5.0 out of 5 stars
As Peggy Hill once said, "I am finally getting the recognition I have always given myself!" Season 6 of KOTH deserves it too..
Verified purchase
I think we can all agree that like most animated shows, King of the Hill took a few seasons to find it's audience, develop it's characters and truly hit it's stride. Season Six is in the midst of that stride. With classic moments such as Bobby taking a Women's Self-Defense class at the local Y (because all of the other self-defense classes were full) where he learned to scream "THAT'S MAH PURSE! I DON'T KNOW YOU!" just before kicking his assailant(s) in the testicles to the brilliantly written Hankisms such as "Well I am the Best Man at this wedding so I'll do it; I'll talk to Dale's dad. *sigh* With the joy of responsibility comes the burden of obligation." We learn that Nancy calls everyone including God, "Shuug(s)" (short for "Sugar") and that Brittany Murphy really did a brilliant job in creating a character out of Luanne that truly demonstrated her talent as a voice-over actor.
One person found this helpful

WriterReviewed in the United States on January 20, 2007
5.0 out of 5 stars
I LOVE Hank!
Verified purchase
This season is great. I have them all.

Hank urges Bobby to enroll in a boxing class at the Y, knowing Bobby needs immediate self-defense. The class was full, so Bobby took the women's self-defense class. Bobby learns to defend himself by yelling "That's my purse" while kicking the attacker in the groin. A great episode!

Dale is running for re-election (as Gun Club president.) Dale eventually risks his friends' lives, as they are almost killed by his election opponent at the Gun Club.

Hank is the target of a woman cop's desires. It's hilarious to watch him squirm! Peggy takes a school Spanish class on a field trip - to Mexico. Lupe, a Mexican girl, is accidentally taken, with the other students, back into the United States. When Peggy realizes what has happened, she takes Lupe back to Mexico and is arrested for kidnapping.

Hank is promoted Hank to manager at Strickland Propane, but when he tells Buck "I love you," he is demoted back to assistant manager. Cotton is jealous b/c his son likes Buck Strickland more. Peggy tries to fix Hank's relationship with his dad. Doesn't work. BUT, Jimmy Carter can fix it!

Kahn tries to bribe Bobby to break up with Connie. Later, they try to push her and Bobby together - when they think Connie is suicidal over the loss of her boyfriend.

Bill's pitiful life depress Bobby after his breakup with Connie. So Hank sends him to Boomhauer to learn how to behave. Mistake!

Bobby is nominated to carry the Olympic torch through Arlen, but Hank gets the job - then messes it up.

At a Renaissance Faire, Peggy stirs discord among the women. Hank tries to land a big propane account.

9.) The Bluegrass is Always Greener

Connie wants to play bluegrass, but her dad insists she play classical. So, she sneaks to Branson with the "Dale Gribble Bluegrass Experience," for a contest.

Peggy takes an online I.Q. test and is stamped "a genius." She blows $900, on a fake PhD through the online company. In the end, she gets her money back...in a cunning way.

Arlen's WWII vets and the Vietnam vets hate each other. But, when Cotton's VFW needs the dues money, they embrace the Vietnam vets. Although, it was a struggle to get there.

Peggy pretends to be a nun to so she can teach spanish. Hank wanted her to work at Strickland Propane with him.

Thinking that the Army used him as a guinea pig (for an experimental drug,) Bill gets drunk and steals an Army tank.

Dale thinks Joseph is not his son, but an Alien's. Hank spends more time with Joseph, and Dale with Bobby. Lessons learned.

Kahn desperately wants membership in an all-Asian country club. Hank's the one asked to join, though. But, only as a token white man. Or else the PGA won't hold their tournament there.

Peggy gets a job at Alamo Beer. She discovers Alamo is making people sick but can't reveal it. For days, no Alamo Beer is available in Texas, so the boys make a trip to Mexico for some. Mistake. That is also tainted beer.

Luanne to joins a sorority, Omega House. It's actually a cult. All the girls are called "Jane." Buck Strickland tells Hank to kill his emus - for the insurance money.

Dale harbors hatred for his dad, Bug, because he kissed Nancy on her and Dale's wedding day. Dale discovers that Bug is actually gay.

Hank has dreams about Nancy Gribble. She is naked! Peggy thinks she and Hank need to go to a nude beach to spice up their marriage.

Bill wants a beautiful jogger, but she chooses Boomhauer - as do all women. Boomhauer falls in love with this woman and is shocked by it.

The Hills and Cotton go to Japan. Cotton wants to apologize for his actions in WWII. Peggy will write about Cotton's apology in the newspaper. Dale and Bill house sit and dress up as Hank and Peggy. Luanne thinks she killed Ladybird.

Hank has a long-lost half-brother. Cotton plans to spit in the face of the Japanese Emperor Akihito at a ceremony honoring WW2 veterans. As Hank and his new brother try to stop Cotton, they see that they have more in common than they thought. Bobby likes a girl at the arcade.

Dr H.AlloyReviewed in the United States on August 13, 2007
5.0 out of 5 stars
BEST SEASON YET I'LL TELL YA WHAT
Verified purchase
Fans of the Hill's will need no convincing to buy this fantastic season that ups the ante on every level. If it weren't for the cultural juggernaut that is 'The Simpsons' this relatively quiet achieving show could well be judged best animated show of all time. It's easy to see why: Beautifully developed characters who are both painfully real and hilariously funny. Great scripts packed with empathy, wit and often riotous fine character detail, all coupled with top shelf voice talent. Every character is expertly tuned to have their time to shine, and in the case of such extremes as Hank's 24 carat abomination of a father Cotton, or his ever more paranoid neighbour Dale Gribble, the levels of creative delirium and outright savage lunacy have never been funnier. Hank's ongoing relationship to his loony Dad provides humour that's close to the bone and damn funny, as is his hilarious relationship with his blustering boss Buck Strickland.

But it's the incredible warmth of the folks in Arlen Texas that makes 'King of the Hill' so darned good. Hank and Peggy are all too human in their struggles, insecurities and victories and son Bobby is often as poignant as he is funny. Once you visit Arlen you won't want to leave.
4 people found this helpful

E ThornReviewed in the United States on May 9, 2018
4.0 out of 5 stars
The season is good, but the DVD lacks anything extra
Verified purchase
It's KOTH in it's prime. That said, the DVD set was a bit disappointing for me; not in terms of the shows, but just because it has none of the special extras that some previous seasons had. No audio commentaries from the characters, no deleted scenes or animations, etc. So if you just want to have access to the season, it's here- but if you were looking for extras you can't find elsewhere, you might be missing them.
One person found this helpful

Amanda RiordanReviewed in the United States on August 4, 2021
5.0 out of 5 stars
Love This Show!
Verified purchase
This is one of mine and my husbands favorite shows! We have seasons 1-4 already and are finishing our collection. Great quality for a great price. Would definitely order again! Fast shipping. Arrived early.

M. J. SearsReviewed in the United States on August 27, 2018
5.0 out of 5 stars
This was written by Rusty Shackleford
Verified purchase
There is nothing not to like. Regardless of your view on the world there is plenty to love about this little neighborhood in Arlen, TX. In this politically charged climate that is very divisive, this show tones it down and laughs at both sides with real life at its funniest.
One person found this helpful
See all reviews
Back to top
Get to Know Us
Make Money with Us
Amazon Payment Products
Let Us Help You
EnglishChoose a language for shopping. United StatesChoose a country/region for shopping.
© 1996-2021, Amazon.com, Inc. or its affiliates