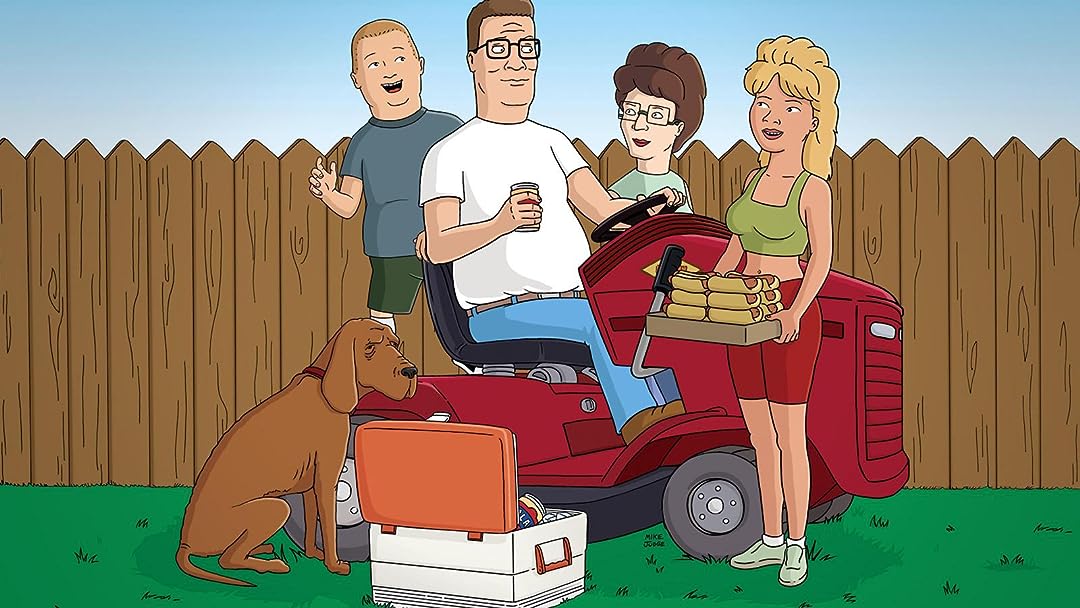 King Of The Hill

(509)
7.32003NR
A half-hour animated comedy that follows the to-day activities of Hank Hill, his family and neighbors in a suburban Texas town.

Ron2900Reviewed in the United States on August 6, 2017
5.0 out of 5 stars
Finally! Thank You Olive Films!
Verified purchase
I tell you what, man, back in 2006 Fox announced that the seventh season of KOTH would be coming out on dvd soon. 2007 came and went, no dvds. Fox announced that they scrapped their plans to release any more seasons of KOTH. Dang it, man, Dang it! The fans went crazy and petitioned Fox to please release KOTH but we just got ignored. That is just bad business Fox, dirty pool, Fox, dirty pool. Now listen up Fox, at Strickland the customer comes first. That is right, the customer comes first. I reckon Fox needs to be schooled on that lesson.

Flash forward to 2014. After nearly nine dang years of praying for this to come out, Olive Films comes to the rescue and starts releasing KOTH on dvd. Now I read some reviews on here and I got mighty scared to buy this, I tell you what. People were saying that their screens would just go black after an episode and not return to the menu, the dvds wouldn't play, and someone was even talking about dang tv logos at the beginning of the shows. I don't know if they got bad bootleg copies or what but the set I have plays perfectly. There are no tv logos and my dvds go back to the main menu after each episode. Every time, man, every dang time.

Yeah man, I tell ya what, man. Those dang ol' Fox flipper dvds, man. No worries, man, no worries. All 23 uncut episodes are on three single sided dual layered dvds. Let me break it on down for y'all:

Disc One:
01 Get Your Freak Off
02 The Fat And The Furious
03 Bad Girls, Bad Girls, Whatcha Gonna Do
04 Goodbye, Normal Jeans
05 Dances With Dogs
06 The Son Also Roses
07 The Texas Skilsaw Massacre
08 Full Metal Dust Jacket

Disc Three:
17 The Good Buck
18 I Never Promised You An Organic Garden
19 Be True To Your Fool
20 Racist Dawg
21 Night And Deity
22 Maid In Arlen
23 The Witches Of East Arlen

Video: The episodes are presented in a solid 1:33 transfer just like they aired. The colors pop and for the most part everything looks good. Sometimes I'll notice some jaggies in certain scenes but it isn't too dang bad or distracting.

Audio: English 2.0 and Spanish 2.0. The audio is clear sounding and I have no complaints.

Extras: Boy, I tell you what, man, this dang ol' set just has the episodes and nothing else. Dang ol' bare bones dvd. Dang it!

Cesar S.Reviewed in the United States on July 16, 2018
4.0 out of 5 stars
Olive Films Cons
Verified purchase
If you didn't already know, King of the Hill DVD releases from Fox ceased after season six, and years later the rest of the show was released by Olive Films. While it is nice to be able to own the whole series, Olive Films season seven set has some minor differences that I'm sure fans who own seasons 1-6 would like to be aware of. First off, while the discs are single-sided and don't require flipping like the previous sets, there is a slight loss in picture quality as a result. I watch the show on a 65" 4K television, so those with lesser displays may not notice, but on my end the picture is not as clear, there are a lot of noticeable jagged lines, and there are quick instances of visible interlacing. These are not issues I had with the previous sets, and they don't warrant skipping out on this release, but they are worth noting. Also, there is no longer a chapter break after the opening theme song, so while I could hit "Skip" to bypass the intro on previous sets, I cannot on the Olive Films season seven release because it will bring you to the mid-mark of the episode. Instead one must manually fast-forward if they don't want to see the theme song before every episode.
13 people found this helpful

Vito MilatzoReviewed in the United States on March 19, 2019
5.0 out of 5 stars
Great show for anyone into comedy
Verified purchase
Such an excellent show, one of the best-of-all-time in my personal opinion. Filled with laughs that address the times it was made in, it can be appreciated by both adults & children alike. Anyone who grew up in the 2000s should have an appreciation for this show which brings a level of nostalgia to the table. Written, produced, & directed by some of the same people responsible for the American-version of the "The Office," if you like this show, you'll love "King of the Hill."
3 people found this helpful

TheDailyDriverReviewed in the United States on November 19, 2014
5.0 out of 5 stars
Good show, Great to have the set. Good packaging
Verified purchase
I just revived my copy of season 7 and 8 on physical DVD Like many other fans I am thrilled to get to own seasons 7 and 8 on DVD. I'm not a big fan of digital distribution so when I herd they were being released on DVD a few months ago I instantly pre-ordered.

Both season 7 and 8 feature nice packaging in the style of normal size cases with a swing flap that I personally prefer over the older style fold outs or slim cases. The artwork is nice and colorful. The cases are clear and an episode list is printed on the reverse side of the art work.

I was happy to see that the three discs are single sided and not flippers. They house about eight episodes a disc. The only small drawback for me is that there are no bonus features at all. I am still extremely happy with everything else. I hope Olive Films will continue to release the remaining seasons on DVD. These two sets have been the first DVDs I have ever pre-ordered, and I would be more then happy to pre-order the rest of the seasons as they become available.
29 people found this helpful

John A. SanchezReviewed in the United States on April 30, 2015
5.0 out of 5 stars
AT LONG LAST! THANKS, OLIVE FILMS!
Verified purchase
A wrong has finally been righted with the release of Seasons 7 through 10 of "King of the Hill," an animated classic. The characters were all likeable, even Peggy when the writers began dumbing down her character. As much as I loved the risque animated shows like "The Simpsons," "Family Guy," and "Futurama" (which was less risque than the former two), it was nice to see a show about a normal family in a normal neighborhood. I'm clinging on to the hope that the remaining three seasons will see release on DVD before the end of the year. I understand that it was considered by Fox that it was not financially viable to release the remaining seasons on DVD (which is why "Malcolm in the Middle" has only seen one season on DVD); well, whatever the reason, I'm just glad that we fans now have these classics.
One person found this helpful

C SheltonReviewed in the United States on June 29, 2015
5.0 out of 5 stars
King Of The Hill Is Back!!!!
Verified purchase
Well, I’ve never thought I’d see the day when King Of The Hill seasons 7-13 would finally be on DVD…It’s about fricking time!! Two Thumbs way way up for Olive Films for getting the rights to distribute the rest of this awesome show!! Now for the people leaving two, and one star ratings complaining about the DVD Quality? Claiming that the show won’t go back to the episode menu if you decide to watch it by episode? Well, either they have jacked up DVD players, or they’re lying sacks of dirt! I’ve tested it on my personal Desktop computer, My PS3 gaming console and my Sony Blu-Ray player and the disks play just fine!!! You can either watch all the episodes back to back, or individually. It works fine!
Now for the people whining about Special Features, They pretty stopped doing all that after season 3 or so. Once they tell you how they draw the characters, and demonstrate how the show is made, it makes sense that they would eventually stop… right?
Anyway, Thanks Olive Films for doing this for all the fans of King Of The Hill!
4 people found this helpful

Peter OlafsonReviewed in the United States on July 3, 2014
5.0 out of 5 stars
The best episode in a strong Season 7
Verified purchase
The best episode in a strong Season 7 -- indeed, one of the best in the whole series. The main characters are at their most believable (the episode's early stages positively crackle with authenticity), it moves along crisply and logically and the script is consistently hilarious, thanks not least to an inspired, detailed performance by David Cross as lead "witch" Ward Rackley. (KotH always got the best out of its guest stars.) Even the ending works -- and this is where many otherwise excellent episodes of the show fall down. Simply brilliant from start to finish.
3 people found this helpful

loganReviewed in the United States on April 21, 2020
5.0 out of 5 stars
Make sure no scratches if it came like mine
Verified purchase
Not new? DVDs inside were out of order in box and one was flipped upside down. Very strange. Nothing else was wrong and dvds were flawless so no biggy
See all reviews
Back to top
Get to Know Us
Make Money with Us
Amazon Payment Products
Let Us Help You
EnglishChoose a language for shopping. United StatesChoose a country/region for shopping.
© 1996-2022, Amazon.com, Inc. or its affiliates