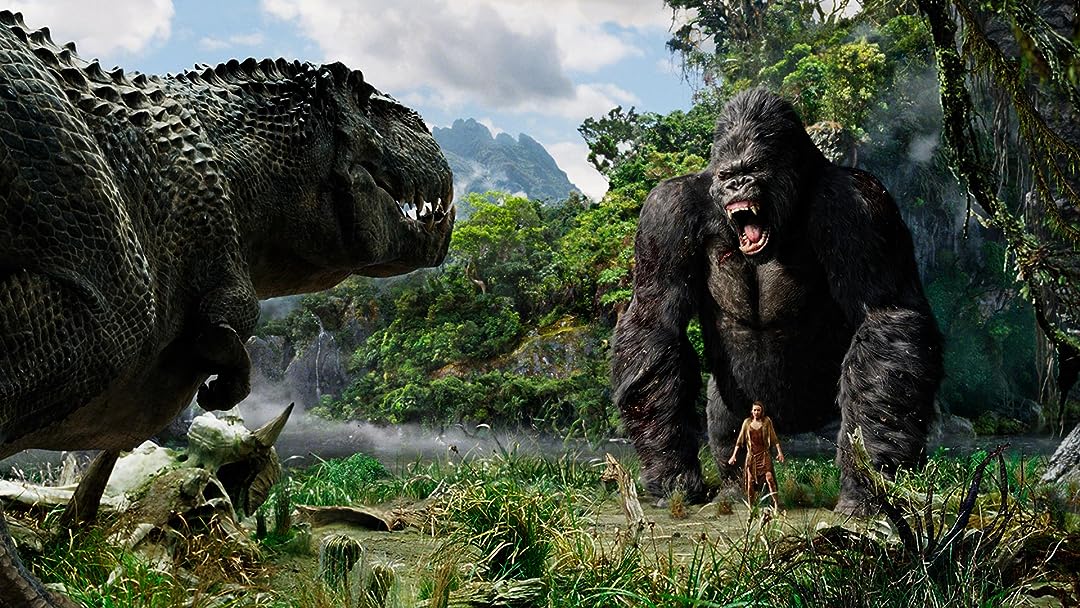 J.N.Reviewed in the United States on January 4, 2018
5.0 out of 5 stars
Extraordinary movie, don't miss it.
Verified purchase
An excellent film, that stands on its own, despite the power of the original. I found this film to be thoroughly entertaining. Some people say it was too long, I didn't want it to end. The visual effects alone were astounding. But throw in all the incredible actors, the set pieces, wardrobe, scenery,...this movie deserves serious praise. There are some complaints about the beginning dragging on. I actually liked the beginning. The whole depression era New York scenes with the period outfits and old model cars really solidified the era for me. For an epic movie like this, you need a long set up to establish everything in the beginning and like said, It wasn't boring at all. There's also a lot of opinions on Jack Black's performance. As far as I'm concerned, not only do I feel that they chose the right man for the part, but also that he did an Oscar worthy job. Its really mesmerizing. If you watch him with an objective eye, he plays this part with fantastic finesse. His facial expressions, body language and the delivery of his lines is spot on. I am so used to seeing Jack Black in comedies, that its fun for me to see him use his skills to perfection, in this dramatic role. I truly believe that he deserved a lot more credit for his performance. His character really stood out. This film should be on everyone's Blu-ray collection.
47 people found this helpful

THowertonReviewed in the United States on March 20, 2021
4.0 out of 5 stars
A case where more makes the movie less.
Verified purchase
(As an aside one of the best things to be generated by this movie was the video game that was based on it--fantastic! Still playing it occasionally and finding that other young people gravitate toward it. But I digress.)

Perter Jackson's remaking of the classic "King Kong" was very much like one of the wonders of the world. Demanding to be seen on the big screen the sometimes wonky CGI matching was forgivable in light of the often fantastic matching and dynamic action keeping an old serialized type of feel to the story. It truly is an honoring remake of the movie. Does the ultimate edition prove the movie to be better than its original release? No, not at all. It bogs down in the overly long introduction while hardly developing any of the characters from what the trimmed and edited theatrical movie showed. But it's a little worse than that; because it bogs down it makes the movie the worse for it. It undercuts the grandeur of the original project and requires too much of the audience to sustain the attention and care. It also makes the movie feel to be a weaker adaptation and exposes more incongruency in the special effects even though the earlier scenes, still effects heavy but not with the beasties, and that weakens the better effects later in the film as the eye catches them easier and it removes the viewer from the rush of the movie.

Still, what a movie. Long live Kong. (Adrian Brody and Naomi Watts did a good job too.)

S.E. R. E. Reviewed in the United States on January 19, 2017
5.0 out of 5 stars
Extended Version is Worth Watching!!
Verified purchase
The extended version was well worth watching. It was fun seeing scenes not in the regular version. My teenage son wanted to watch this movie again for weekend movie night and we decided to try the extended version. The entire family was pleased with seeing the extra footage that added to the overall quality of the movie.
25 people found this helpful

EricReviewed in the United States on April 6, 2021
4.0 out of 5 stars
Good Monke Time, A Little Problematic
Verified purchase
Some how, I still think this King Kong was better than the newer one with Loki and Captain Marvel. A small thing to most, but cool to me was the silver-back gorilla form Kong was modelled after. Jack Black acts the living hell out of this movie. The writing is not good, but it feels like the rest of the movie tries valiantly to make up for it. Does it need to be the length of a Tolkien movie? No. Did it need the Adrian Brodie/Naomi Watts romance that was shoe-horned and meaningless? Of course not. Did it need the super racist and ignorant portrayal of indigenous people? Absolutely not. Does it still total up to a movie equivalent of a theme park ride? Yes, and in the best way.
One person found this helpful

TheBroteinReviewed in the United States on September 3, 2020
3.0 out of 5 stars
Exhausting
Verified purchase
I did not hate this movie. Honestly there was a lot I liked. The atmosphere of Skull Island, Kong himself, the 1930's atmosphere. I guess my trouble with the movie is that it is just non stop scene after scene of the main characters getting in trouble and having to fight some monster off. I know that's what I paid for but I never thought I'd actually say I got tired of it. 3 plus hours of it! None of the characters I truly cared about. I wish Peter Jackson actually spent a little bit more time on them so I would care when stuff happened, because honestly I didn't. It's entertaining but also exhausting.
One person found this helpful

Uncl ScottReviewed in the United States on February 1, 2021
5.0 out of 5 stars
The visual clarity is unmatched.
Verified purchase
So I bought a new 75 inch, dolby vision, 4k tv. Naturally, I added the 4k uhd blu-ray too. I've been renting a few 4k titles, before buying, and hands down, the clarity is some of the best on any 4k uhd option. Also, it's Jackson's King Kong Extended Cut!!!!

The extended version includes more action rather than character development. And the fight scene between Kong and the T-Rex's has to be one of the best choreographed sequences ever. Everyone with taste in movies, or a 4k tv, should own this movie.
One person found this helpful

J. A.Reviewed in the United States on March 26, 2021
5.0 out of 5 stars
Jackson’s Epic Dream
Verified purchase
There’s always been a debate over Peter Jackson’s love letter to his childhood favorite movie. Whether it’s the length, the dinosaur valley f/x, or Jack Black’s casting (or miscasting to some people), Jackson’s movie is definitely a LOT of movie. However, what everyone can agree on is that at its heart is an old-school adventure movie. Andy Serkis’s motion capture performance of Kong provides the most sympathetic and relatable take on the legendary movie “monster” to date, while Naomi Watts as Ann Darrow gives a performance that makes Kong’s fall from the Empire State Building all the more tragic. The blu-Ray is a great value, and includes the original theatrical cut and an extended cut that adds a few more interesting scenes. Overall, fun for any adventure movie fan.

Anthony Lotsa-MoviesReviewed in the United States on February 21, 2010
5.0 out of 5 stars
This KONG is the KING of remakes! Blu-Ray review.
Verified purchase
I am hard pressed to think of any greater remake of a classic film! Peter Jackson pays homage to the original blockbuster film KING KONG of 1933. So many scenes, down to the nuances are remade to perfection in this classic. The acting is fantastic and the action is unbelievable. Some of the greatest CGI work of our time is done in this film. You will believe this 25' ape is living and breathing on screen with Naomi Watts. If you have never seen the original, it is a story of a filmaker that sets sail for a prehistoric island. This place where civilized man has yet to step foot, where mysterious wonders await. When the damsel in distress is captured she is offered up to Kong as a sacrifice. The crew saves her and captures the beast for display and profit. Soon Kong is loose and recaptures the fair maiden. This leads to one of film's alltime great moments as Kong battles bi-planes at the top of the Empire State Building!

King Kong is a classic and Peter Jackson's love for it, is on full display. The movie is long as it should be. Great storytelling should never take shortcuts! A must own for any movie lover!

NOW FOR MY BLU RAY THOUGHTS: Universal does it again! The picture and sound are breathtakingly beautiful. This disc gives you both the theatrical and extended versions. Please watch the extended, it is so worth it. Unfortunately there are no special features. This is upsetting for someone who has the 3 disc extended edition. FINAL THOUGHTS: Even with the lack of special features, this is a must own blu-ray. Demo caliber disc. ABSOLUTELY UPGRADE!
8 people found this helpful
See all reviews
Back to top
Get to Know Us
Make Money with Us
Amazon Payment Products
Let Us Help You
EnglishChoose a language for shopping. United StatesChoose a country/region for shopping.
© 1996-2022, Amazon.com, Inc. or its affiliates