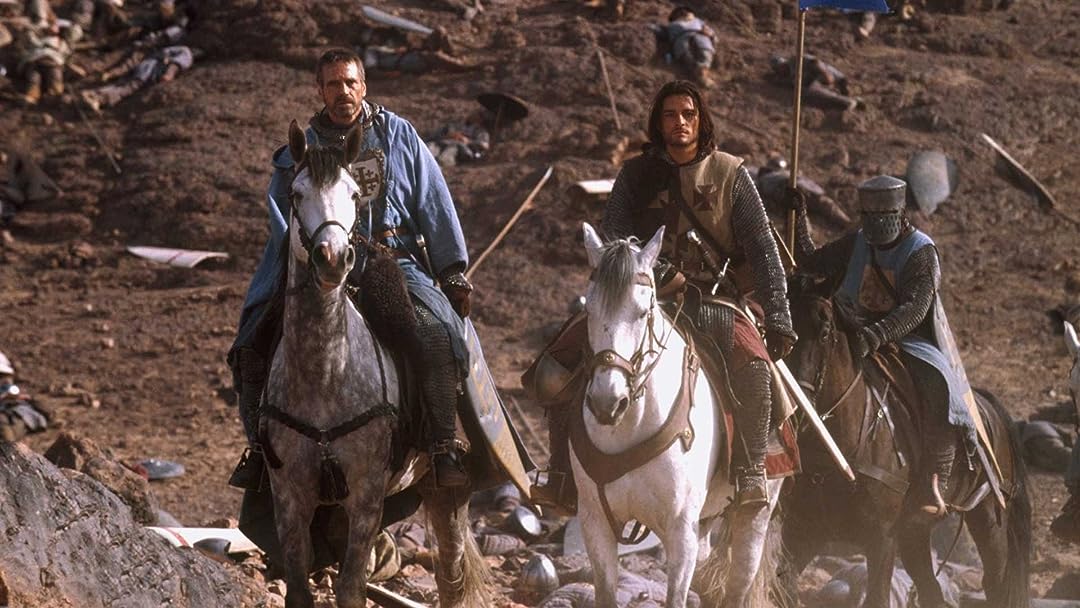 Kid at Heart and Renaissance ManReviewed in the United States on July 7, 2018
5.0 out of 5 stars
The Director’s Cut is a Masterpiece (the theater version was not)
Verified purchase
I didn’t like the movie “Kingdom of God” very much, but the full director’s cut is beautiful. It was a mistake for the studio to chop it up like they did. The director’s cut is a masterpiece with tender moments and better character development that allows the talents of each actor (even the minor, supporting actors) to shine through brilliantly.
41 people found this helpful

Justin Han Yee LuiReviewed in the United States on October 7, 2018
4.0 out of 5 stars
Longer and different cut
Verified purchase
I couldn't remember the first time I saw it, and as my buddies and I watched the extended version, they noted that the uncut scenes changed the dynamic of the store. It flowed very differently than what was originally released. And though it was 3 hours long, we were on vacation and it kept us entertained.

So if you have time and wanted a different experience on a movie already watched, this might be the one to add to your filmography.

Sotto voceReviewed in the United States on November 23, 2019
5.0 out of 5 stars
Great surprise
Verified purchase
Even for someone that enjoyed the screen release it was quite clear that the storyline was missing linking parts. The Kingdom of Heaven was a mega-movie must ... another Ishtar. I still watched it a dozen times over the intervening years and had mostly forgotten about it.

I next ran across perusing Amazon Prime Video. That it was such a more extended playtime than the original, I gave in to an afternoon.

What a treat. This director's cut causes pause to wonder what the studio execs were thinking of editing the storyline out? The directors cut is a wholly different and complete movie.

DR MReviewed in the United States on February 23, 2016
5.0 out of 5 stars
Great Movie if you understand the history and the context in which story occurs...
Verified purchase
This is a very interesting movie that retells the history of Jerusalem when the Crusaders lost the city to Saladin around 1100 AD. The movie is a combination of historical fact with a fictionalized story of a french blacksmith who becomes a knight for the King of Jerusalem and love interest to his sister. A good companion read to this movie is a book about the history of Jerusalem entitled, "Jerusalem - A biography" by Simon Sebag Montefiore. Actually, you should read the book prior to seeing the movie. The book puts the story and the movie scenes in context and make the story of the movie more incredible. In addition, it sheds light on the popular beliefs of the Christian Church during this period in time. For example, there was a pervasive view espoused by the French Pope of the Catholic Church that a crusade to the Holy Lands was an opportunity to cleanse your life of its mortal sins. Consequently, a crusade to the Holy Lands was popular and viewed by the faithful as something that they had to do. It also sheds light on the character of Saladin, the leader of the Muslims who was ultimately successful in taking back Jerusalem from the Christians. (By the way, the Muslims controlled the city until 1947 when it was partition by the UN in 1947/48). Great story and great history to learn and know.
71 people found this helpful

muttmanReviewed in the United States on May 20, 2015
5.0 out of 5 stars
the way it was supposed to be.
Verified purchase
The directors cut is the only way to watch this movie. It did poorly at the box office because the studio execs were too short sighted to let Ridley Scott send it to the theaters with out cutting it to ribbons. The directors cut is fabulous.
88 people found this helpful

James L. Chester , SCReviewed in the United States on August 7, 2016
5.0 out of 5 stars
This film certainly must be Ridley Scott's finest hour. Having just sat through three hours of ...
Verified purchase
I was looking for a sixth star to rate, but couldn't find it.

This film certainly must be Ridley Scott's finest hour. Having sat through three hours of Kingdom of Heaven director's cut, I was amazed how this time piece passed so quickly. This is surely what a movie experience should be. Here we find history, monumental action, hauntingly beautiful locations, spoken love and redemption. Not to mention a brilliant staring cast bar none. For those of you who are not that familiar with Orlando Bloom (in the lead role), I highly suggest you see this actor's magnificent performance. All in all I find myself in awe of this soon to be classic, and do plan on purchasing the DVD from Amazon to ad to my ever growing film library.
27 people found this helpful

EAReviewed in the United States on August 30, 2020
5.0 out of 5 stars
A journey to save the soul
Verified purchase
First of all, you really need to see the director's cut. Initially, I thought that the movie was excessively long and got confused about the relevance of some scenes, but in the end everything made perfect sense together. I first watched the regular version (theatrical cut), and it felt incomplete.

On the surface, the movie is about jihad and crusades, or the fight between Christians and Muslims. The concept "jihad" is often misunderstood. "Jihad is classified into inner ("greater") jihad, which involves a struggle against one's own base impulses, and external ("lesser") jihad, which is further subdivided into jihad of the pen/tongue (debate or persuasion) and jihad of the sword." (Source: Wikipedia). Similar to the concept of jihad, this movie is also easily misunderstood. It is not about war, or at least, it is not the main point. The protagonist is on a crusade, but the external aspect of his crusade or his fight against Saladin is just a plot tool to illustrate his internal crusade against temptations. Apart from this, the movie makes two important points: (1) Religious fanaticism is a result of greed and other character flaws. (2) Holy wars are never truly holy, they are always excuses to acquire land and wealth.

In the end, it does not matter who wins the "external" or "lesser" battle. The ultimate question is: Will Balian resist the temptations surrounding him and save his soul?
2 people found this helpful

George Carpenter IIIReviewed in the United States on August 10, 2015
5.0 out of 5 stars
The Kingdom of Heaven returns
Verified purchase
Kingdom of Heaven is a masterful film. It can best be described as "Historical Fiction " but the storyline allows the viewer imagine what Jerusalem was like at the end of medieval reign of the Christian kings. This has been one of my favorite movies for years but it was the first time I have seen the "Director's Cut" version. It more clearly explains some of the personal history and relationships that are left out in the commercial version. I would watch this movie again and again. Ridley Scott does not disappoint in this mammoth production.
22 people found this helpful
See all reviews
Back to top
Get to Know Us
Make Money with Us
Amazon Payment Products
Let Us Help You
EnglishChoose a language for shopping. United StatesChoose a country/region for shopping.
© 1996-2022, Amazon.com, Inc. or its affiliates