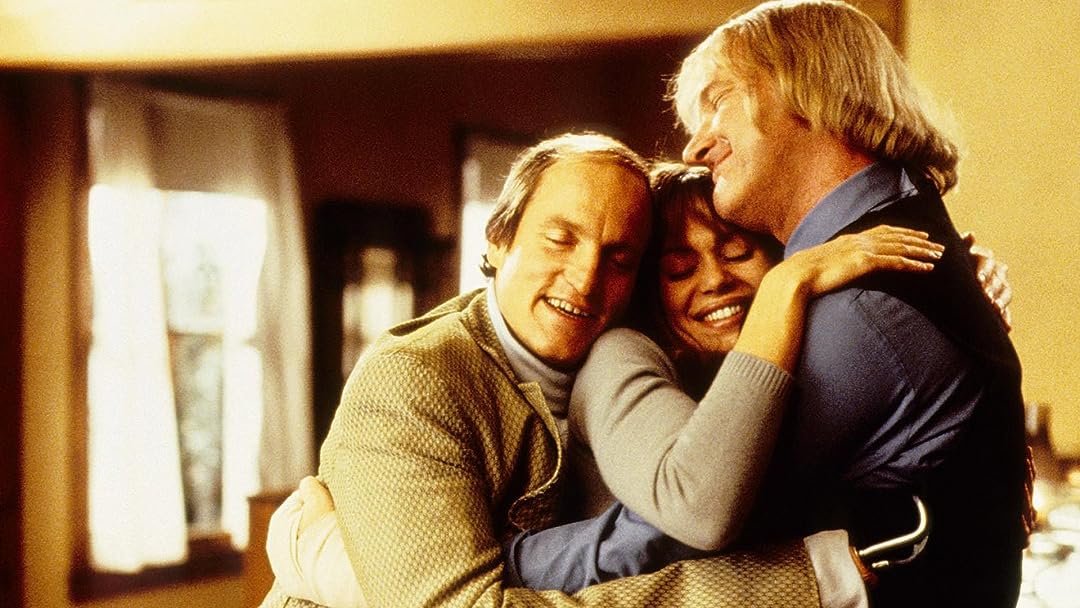 (2,815)
6.91 h 53 min1996X-RayPG-13
Woody Harrelson plays Roy Munson, an excellent bowler who falls for a scheme and loses everything. Seventeen years later he discovers a protege named Ishmael (Randy Quaid) and is convinced he has found his meal ticket back to the top.

John WernerReviewed in the United States on December 15, 2019
5.0 out of 5 stars
So Good It Elevates Politically Incorrect Comedy To Shakespearian Levels
Verified purchase
If there is a category for college alternative movies, like music, I nominate the Farrelly Brothers. They’re just “off” enough that their humor while often silly is whip-smart wicked funny. That means these guys are deftly talented. They can take liberties that in lesser hands would likely fall flat even being offensive. Instead they masterfully manipulate stupid and offensive into hilarious comedy as their debut with Dumb and Dumber hit big proving. So here we have a similar formula of two uncool guys on a wacky adventure Smartly, however, they are not even close in disposition and are serendipitously brought together by the most uncool sport on planet earth: professional bowling. These little differences make King Pin a superior film to the mega-successful Dumb & Dumber.

In King Pin amidst all of the possibly sharply barbed satire there is a real heart of humanity. It hovers at different times and makes an excellent sum in the unexpected ending. I always love the Farrelly Brothers pop music sound tracks and it’s excellent here. They often weave in overlooked gems that are so cool and well placed. When a soundtrack elevates the proceedings it actually affects the storyline masterfully. Speaking of masterfully. Woody Harrelson plays his role of Munson so well it appears we’re seeing an actual person as the actor melts into the part. It is exceptional to do this with the portrayal of a downer character playing comedy wrapped in equal parts spiraling down and barely hanging on all the while retaining a sliver of hope. Munson as a character does all this for which you can’t help love the loser. What’s a loser without an evil foil? That is provided in superlative fashion by none other than the slimy comedic excellence of Bill Murray as profession bowling’s reining kingpin “Big Ern”. I simply cannot imagine this working so well without Bill Murray’s role. He’s an absolutely perfect slime ball. Then there’s the glue which binds these character’s together and it’s Randy Quaid. Quaid playing the Amish “kid” turns in one of his finest portrayals of a character, ever. Whatever happened to him in later life he had acting chops to play an utterly ridiculous role and do so in such a natural way it seems, again, that the actor faded into a very real misfit. Vanessa Angel as the femme fatale is so right her unlikely pairing with Munson and “The Kid” never feels wrong in spite of it being wholly unthinkable. What’s happening here? It’s a mini-masterpiece of left-field comedy is what. This is one wickedly intelligent raucously funny movie.

joel wingReviewed in the United States on March 17, 2020
4.0 out of 5 stars
Hilarious over the top comedy by the Farrelly brothers
Verified purchase
Kingpin was another goofy film by the Farrelly brothers. It stared Woody Harrelson as Roy Munson a young bowling star who eventually loses his hand trying to hustle people. He becomes synonymous with failure. His nemesis is Big Ern McCracken played by Bill Murray who has all the fame and prestige that Munson wants, and rubs his nose in it as well. The story revolves around whether Munson can find redemption in the bowling world. To do that he backs a young bowler named Ishmael (Randy Quaid) who happens to be Amish.

The Farrelly’s played the plot for everything it was worth. When Munson was successful he had a full head of hair. When he’s down and out he’s balding with a horrible comb over. Munson has to pose as an Amish to talk to Ishmael and does all kinds of ridiculous things like cut off the hooves of a horse when he’s told to change its horseshoes. Of course they push the limits as well sometimes like when Munson has to sleep with his old alcoholic land lady to cover his rent or when Ishmael tries to go poo in a urinal.

Who really steals the show however is Bill Murray. McCracken is a total sleaze bag. He’s got an even bigger comb over than Munson, and does charity work by sponsoring a fatherless family with a hot mom. He’s hilarious in every scene.
C

AdamReviewed in the United States on August 23, 2022
5.0 out of 5 stars
This movie is so funny and underrated!
Verified purchase
If you liked Dumb & Dumber, Naked Gun, Talladega Nights, or any National Lampoon movies then you'll love this flick. The quotable lines in this movie are never ending. Funny from beginning to end.
2 people found this helpful

T98Reviewed in the United States on April 17, 2022
5.0 out of 5 stars
Classic comedy
Verified purchase
Not politically correct, and it is hilarious. Perhaps Woody Harrelson's finest film as the can't-catch-a-break faded bowler, and Bill Murray is perfect as his nemesis. Solid writing and cast. Recommended.
2 people found this helpful

DOOMJESUSReviewed in the United States on July 21, 2020
5.0 out of 5 stars
LOOKS REAL GOOD...
Verified purchase
CONCERNING THE BLU RAY DISK THAT IS CURRENTLY ON OFFER:
THIS APPEARS TO BE PRESENTED IN IT'S ORIGINAL FORMAT. YOU WOULD NEED AN EXTRA WIDE SCREEN TV TO RENDER THIS VIDEO WITHOUT A LETTER-BOX. BUT THE IMAGE TRANSLATES VERY WELL TO A 2160P OR 1080P SCREEN, NONETHELESS. THE VIDEO IMAGE IS CRISP AND FINE, COLORS ARE GREAT, AUDIO IS FINE. NO SONGS APPEAR TO HAVE BEEN OMITTED FROM THE SOUNDTRACK BUT I'M NO EXPERT. REALLY NICE TO SEE THE ORIGINAL ASPECT RATIO HAS BEEN PRESERVED ON THIS DISK. IT ALSO CONTAINS A FEW EXTRAS. I'D CALL THIS ONE DEFINITIVE, FOR NOW. I DOUBT WE'LL EVER SEE A 4K UHD RELEASE OF THIS ONE BUT YOU NEVER KNOW. AREN'T YOU GLAD THAT i TOLD YOU A LITTLE BIT ABOUT THE PRODUCT INSTEAD OF REVIEWING THE TWENTY FIVE YEAR OLD MOVIE OR COMPLAINING ABOUT THE SHIPPING? LOL
2 people found this helpful

missusmsReviewed in the United States on July 15, 2016
3.0 out of 5 stars
Do not buy this movie if you want to see every single scene in kingpin, as many are deleted in this version 👎👎👎
Verified purchase
So I'm giving this review three stars because it had many of the funny scenes cut out of the movie. What the hell? How did I miss that, is there something on the movie that says many scenes were deleted? My husband was very disappointed as this is one of his favorite movies to watch for a great laugh. Price was good, but the deleted scenes really irked me. I guess I should've read the fine print.
19 people found this helpful

Scrooge McDuckReviewed in the United States on December 4, 2002
4.0 out of 5 stars
You would be punctilious in assuming that this is a good movie
Verified purchase
In a rare instance of the UK getting a movie before the US, Kingpin was a surprisingly pleasant discovery on a Saturday afternoon back in the sunny July of 1996. It has since gone on to be one of my favorite comedies and showcases Bill Murray's evil, sarcastic humor at it's finest.

Woody Harrelson is Roy Munson a young, up-and-coming bowler who falls foul of 'Big' Ern McCracken (simply by beating him). Ern executes a cunning revenge on Roy which results in the loss of his precious bowling hand. Flash-forward 17 years and Roy is living a truly grotty life and is a complete and utter loser. His hustling attempts fall flat and it looks like he's destined for a future of failure until he meets naive Amish 'boy' Ishmael, who just so happens to be a bowling prodigy. Roy and Ishmael team-up and head to Reno, Nevada for a big bowling showdown with the diabolical 'Big' Ern.

Part road movie, part profound life journey, Kingpin is probably the most mature Farrelly Brothers movie and certainly their best effort so far. The script is just jam-packed with brilliant dialogue and gags, and Ishmael (or 'the kid' as they keep calling him despite the fact that Randy Quaid was 45 at the time of filming) may just be the sweetest character of all time and may even rival Cousin Eddie as Quaid's funniest role. But it is Bill Murray as 'Big' Ern who steals the movie and runs away with it. Apparently he just threw the script away and decided to ad-lib, and you can tell. He keeps the rest of the cast on their toes and enjoys himself way too much. His Unified Fund TV commercial is comedy gold.

It may well be one of the most underrated comedies of all time, but Kingpin is a far superior film to the likes of There's Something About Mary or Me, Myself & Irene. It's lack of success or popularity is not a reflection on its brilliance.

The DVD looks horrible in 2.35:1 anamorphic widescreen with Dolby 5.1 sound. Why is there not a Blu Ray yet. This DVD hit the shelves less than two years after the format hit the streets. Blu has been around for 5 years now and we're STILL waiting!
10 people found this helpful

ArtFanReviewed in the United States on November 23, 2018
3.0 out of 5 stars
Weird mix of dumb humor and tenderness
Verified purchase
On the one hand, I wouldn't say I liked this film as much as Roger Ebert did. On the other hand, I can understand why he liked it. Despite the mostly dumb humor, the movie has a genuine heartfelt respect and appreciation for people who don't have the advantages that we often come to expect (intelligence or good looks). The story is decent as well. The main problem is that there is a lot of crude humor, while witty humor is very seldom.
2 people found this helpful
See all reviews
Back to top
Get to Know Us
Make Money with Us
Amazon Payment Products
Let Us Help You
EnglishChoose a language for shopping. United StatesChoose a country/region for shopping.
© 1996-2022, Amazon.com, Inc. or its affiliates