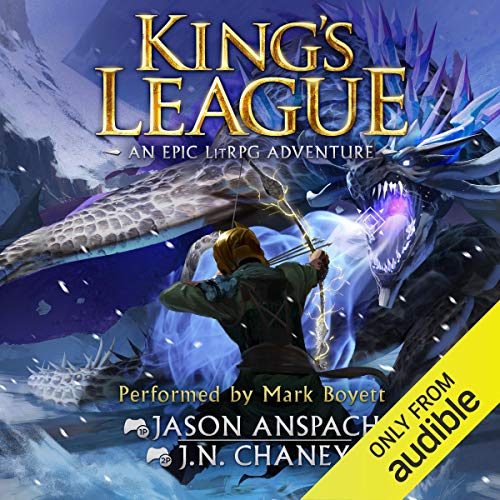 King's League is more than a game...it's a way of life.

For recently expelled college dropout Dirk Wilson, picking up and re-selling other player's scraps from cleared dungeons and side quests gone sideways is the only thing keeping him from living on the streets.

Tired of ramen noodles, past-due notices, and feeling like his future is over before it ever started, Dirk decides that if he's going to make something of himself, it'll be within the game, taking advantage of the real-life payouts from selling in-game goods on King's League's River Market.

But the game leaves little margin for error, and Dirk's virtual problems grow as large as his real-life ones as he discovers a powerful conspiracy that impacts players from level one to level 99.

One-million-copy number-one best-selling authors Jason Anspach and JN Chaney team up to tell this action-packed, humorous LitRPG adventure that blends the cheeky fun of Ready Player One with all the adventure and excitement of Elder Scrolls and World of Warcraft.

Your audiobook is waiting!
Learn more about membership
List Price: $30.40
You Save: $0.41 (1%)
By completing your purchase, you agree to Audible’s Conditions Of Use
Sold and delivered by Audible, an Amazon company

Zach
5.0 out of 5 stars Fun LitRPG story
Reviewed in the United States 🇺🇸 on December 6, 2022
Verified Purchase
Enjoyed this story. Writing and pacing of the narrative was great, and the acceralation into the climax was handled excellently. Looking forwards to the next in the series
Read more
Helpful
Report abuse

tdragovich
5.0 out of 5 stars Not what I was expecting, but a great read!
Reviewed in the United States 🇺🇸 on October 21, 2022
Verified Purchase
This was passed to me as litrpg, and I guess it is in a way. It would be along the same lines as calling a "Halo" or "Witcher" would be considered litrpg. To me neither of those fit the category so neither would this.

The story is well wrote, and character development is solid. Action is top notch and any fan of rpg's can easily picture how the mc can pull off the moves he does.

Already starting on book 2 and will most likely finish the series.
Read more
Helpful
Report abuse

Amazon Customer
5.0 out of 5 stars Very compelling.
Reviewed in the United States 🇺🇸 on October 17, 2022
Verified Purchase
This is one of those stayed up way way too late reading type books. For fans of Stephenson's Reamde and Suarez's Daemon., but lighter lifting.
I'll be up too late tonight, reading book 2. Guaranteed .
Read more
Helpful
Report abuse

Kindle Customer
5.0 out of 5 stars Great read, would make a great movie too
Reviewed in the United States 🇺🇸 on June 13, 2020
Verified Purchase
Pro: Sympathetic MC, quick pacing, crisp action, clever dialogue, humor and heart. It's like someone made a checklist of everything a great fantasy should have and then recruited a dream team to write it. It's still more of a summer action blockbuster than "epic" in the LotR sense, but if I taught creative writing this would be required reading in my class.

Con: Hard to think of one, really. Dirk goes solo comms silence for a lot of his grinding, so you don't get the banter or relationship growth of a party ensemble or intelligent item duo, but that's more of a deliberate design choice than a failing (though for the record, if Graydon's Helm had been wisecracking the whole time I would have been greatly amused, but perhaps not so many other readers would have appreciated it, YMMV). I will say that, as entertaining as this is (very!), there isn't much character growth for the MC and there aren't any big heroic sacrifices or other emotionally wrenching scenes, so if you're looking for high drama rather than clearing Dungeons and slaying Dragons, you might score this a bit lower.

Anyway, this was well worth my money and I'm looking forward to the next.
Read more
7 people found this helpful
Helpful
Report abuse

Kindle Customer
5.0 out of 5 stars VR litrpg
Reviewed in the United States 🇺🇸 on April 4, 2022
Verified Purchase
A pretty interesting take on VR MMORPG litRPG. The mc starts from fairly weak and finds a way to rapidly advance against a fairly stock antagonist, but it all manages to happen in a unique way that keeps it interesting. Definitely worth a read if you like this kind of book
Read more
Helpful
Report abuse

RavenBlack
2.0 out of 5 stars Literally *just* a story about someone playing a MMORPG
Reviewed in the United States 🇺🇸 on January 5, 2021
Verified Purchase
This is the first LitRPG I've read that didn't have some actual fantasy elements, e.g. NPCs turning out to have lives of their own, players getting physically absorbed into the game, characters coming out of the game. I guess there's also the "Ready Player One" kind where actions in the game turn into actions in the player's real life. In this case none of that is true - the only "real world" context is that the main character earns money in game, which he needs in the real world. There is a single line in the entire book that threatens further overlap; another player exposes that they know the main character's full real name. But then they don't do anything with it. Maybe it becomes relevant in a sequel.

I could see how other people might like this format - if you like reading stories about other people playing video games, you'd like this, it's well written and action-dense. I prefer some actual fantasy in my fantasy, so for me, it's not a high rating.

Don't get me wrong, there is kind of some fantasy in there in that the world has futuristic stuff in it; voice-controlled things that understand human language in game, VR gear that seemingly makes the game very immersive. That doesn't really make it any more interesting for me personally, and the game itself sounds atrociously boring and repetitive, much like actual MMORPGs! (Which, again, don't get me wrong, the game *as played by the hero* is interesting enough - it just sounds incredibly bad for every player who isn't in the process of unearthing super magic high-end brand new content that also makes them rich, which is literally every other player except the hero.)
Read more
14 people found this helpful
Helpful
Report abuse

Kindle Customer
4.0 out of 5 stars Pleasantly surprised!
Reviewed in the United States 🇺🇸 on October 18, 2021
Verified Purchase
This was a marvelous experience. I was hooked after the first few chapters, and couldn't put it down till finished. A fun read highly recommended.
Read more
Helpful
Report abuse

Daeleon
5.0 out of 5 stars Tension
Reviewed in the United States 🇺🇸 on June 10, 2020
Verified Purchase
I decided to name this review "Tension" for the simple reason that that is what this book does extraordinarily well.

From the start, the main character is in a desperate situation, on the edge of complete ruin. The authors have done a masterful job of bringing that tension throughout the entire book and continuing to build it right through the end.

The LITRPG crunch is in about the middle of the scale and integrates well with the story elements.

Overall, an excellent read but be sure to prepare yourself for being sucked into the tension of the story and give yourself plenty of time to read as you will not want to put the book down.
Read more
5 people found this helpful
Helpful
Report abuse
See all reviews

Kindle Customer
4.0 out of 5 stars A whole lot of fun
Reviewed in the United Kingdom 🇬🇧 on August 12, 2022
Verified Purchase
This story was a whole lot of fun. There are parts that seemed unnecessary, bits of explanation that seemed wedged in, but ignoring those, it's actually a great yarn in a setting that's both different and entirely familiar.
Read more
Report abuse

AA Lee
4.0 out of 5 stars Like Dirk a Lot
Reviewed in Canada 🇨🇦 on July 14, 2021
Verified Purchase
While this is a new genre for the author, he did not disappoint. He did a great job of creating a character who feels as real as the guy next door - down on his luck, unemployed, loyal to a fault and with a solid core of morals and ideals. I enjoyed how Dirk develops and grows. He may not become the leader he could be, but Dirk just knows how to inspire others to live their dreams; that may actually be a more desirable character trait than leadership. I wonder if Dirk will grow as a leader in the next book. I guess I am going to have to get the next book and see.
Read more
Report abuse

Colleen
5.0 out of 5 stars One of the very best stories I have ever read
Reviewed in Australia 🇦🇺 on June 30, 2020
Verified Purchase
Just double WOW. I couldn’t put my kindle down reading this extraordinary story. This is the first time I have read one of this genre so didn’t know what to expect. Boy was I in for a ride and a half. The quality of writing was exceptional, the characters exceptional and I have no idea whatsoever how the author managed to switch as he did - that’s all I will say so I don’t give out any spoilers. I am lamenting that the next one in the series is not here yet. J.N. Chaney and Jason Anspach that was one epically awesome ride!!!
Read more
One person found this helpful
Report abuse

Samson chui
5.0 out of 5 stars Great!
Reviewed in Canada 🇨🇦 on August 20, 2021
Verified Purchase
Well worth reading! Fun system mechanics and no filler.
No harem and the action is perfect as of first chapter
Read more
Report abuse

Kindle Customer
4.0 out of 5 stars Fun read, OP MC
Reviewed in Australia 🇦🇺 on September 27, 2020
Verified Purchase
Well, its a fun to read even though its not really believable gameplay. It has really broken items in game.
Read more
One person found this helpful
Report abuse
See all reviews