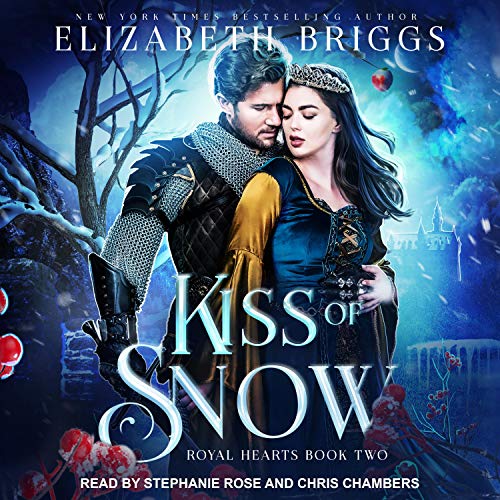 After the king of Talador's mysterious death, Princess Lily must prepare to take the throne, even if she doesn't feel ready yet. As her coronation draws near, an attack on her life sends her fleeing the castle with her devoted Captain of the Guard, Keane, the one man she trusts above all others.

When she arrives at her other palace, she is courted by seven handsome suitors, all hand-selected to potentially be her future king. With her kingdom in danger and her forbidden magic growing stronger, the last thing Lily wants to do is select a husband - especially when she'd rather be with the man who's been by her side for years.

Now that Lily is going to be queen, Captain Keane understands she needs to marry a nobleman, even if the thought makes him want to run his blade through every one of her suitors. As long as he hides his true feelings for Lily, he can continue to protect her - even if no one can protect his heart. But when the attacks on Lily grow more dangerous and a threat from the past emerges, they must embrace her magic and their forbidden love if they're going to save her throne.

4.4 out of 5 stars
4.4 out of 5
70 global ratings
How are ratings calculated?
To calculate the overall star rating and percentage breakdown by star, we don’t use a simple average. Instead, our system considers things like how recent a review is and if the reviewer bought the item on Amazon. It also analyzes reviews to verify trustworthiness.
Top reviews

Sarah Williamson
1.0 out of 5 stars Creative Yes, For Kids No
Reviewed in the United States on October 19, 2020
Verified Purchase
This is another one of those misleading type of books until after you buy it you don't know if it's for Young Adults or not and this certainly is not . I would have loved to read this and not worry about the romance scenes being to much but honestly there's just some stuff people don't wanna read about.
Read more
3 people found this helpful
Helpful
Report abuse

chloe
4.0 out of 5 stars Great...
Reviewed in the United States on October 12, 2020
Verified Purchase
It was a fun read until the sex scenes, I wanted to throw up.
Read more
3 people found this helpful
Helpful
Report abuse

Jennifer G
VINE VOICE
4.0 out of 5 stars Clever
Reviewed in the United States on August 15, 2020
Lily has been preparing to rule her entire life but when her father unexpectedly died, the time came sooner than she wanted. After a failed attack on her person, her Aunt encouraged her to meet with potential suitors to secure the throne. All were noblemen who could strengthen her country but none are the one man she has trusted her entire life. Captain Keene, the devoted Captain of her guard has watched over Lily for years and has been in love with her almost as long. However, when a threat from the past surfaces it will take them working together to save Lily's crown.

This is a clever rendition of Snow White complete with its own Grumpy and Sleepy. There's plenty of intrigue, action, romance, and of course, a version of Prince Charming. There are also loving sisters including a little spitfire, an unusual fairy godmother, and an evil witch. But the best part is the princess who discovers she had the magic inside herself all along.
Read more
3 people found this helpful
Helpful
Report abuse

The Bookie
4.0 out of 5 stars Short and sweet
Reviewed in the United States on March 22, 2021
While there are at least a hundred modern variations on the old fairy tales you can find, Elizabeth Briggs managed to produce two very unique plots in this series so far. I love that the books could be read as stand-alones, but she tied both stories together beautifully. The characters are likeable and the mixture of the chivalous age and magic never gets old for me. This retelling of Snow White was, perhap, not as unique as the previous book that played upon Beauty and the Beast, but it was still a nice short escape from the real world with just enough angst, passion, and tribulations to keep it interesting.

My only complaints are: it was almost too short. I get that we are in an era of expediency and immediate gratification, but stories lose so much when almost all details are left out and glossed over. And its becoming much more common. *sigh* Maybe I'm old fashioned but I like to immerse myself a little deeper in books. Though, this trend is certainly not restricted to Briggs writing, so I shouldn't pick on her when she writes so well.

Others will probably love it, so don't let my grouchiness stop you from reading this. It really was a sweet book, but...

Mild unsurprising for this genre tropy spoiler ahead...

Finally, I ended up skipping the last chapter/epilogue as soon as Lily got "quesy in the morning." Not only do I hate that trope..
It implies a woman's main value is her ability to reproduce offspring. And generally parenthood in certain genres (like fantasy romance, especially) ends up taking over everything. Suddenly the woman is a useless fragile flower that mustn't do anything WhAtsOeVEr to possibly risk the baby, especially something interesting. That bites. And it makes book characters infinitely less enjoyable. Not to mention how the alleged adorableness, rambunctiousness and impertinance of all children is usually drilled into reader's heads as the pinnacle of cuteness... Yes, I am grumpy about this trope. Sorry, not sorry. Child-centric adult romance stories are not my thing... though, again, I am getting on Briggs case unfairly probably. I just hated that ending and while I was really looking forward to the next installments in the series, I am getting worried that the reproductive abilities of the leading ladies will start to overshadow other elements as everyone gets knocked up.
Read more
One person found this helpful
Helpful
Report abuse

Carrie Thackston
5.0 out of 5 stars Clever and fun fairytale retelling!
Reviewed in the United States on August 13, 2020
I thoroughly enjoyed this fairytale retelling. Lily is now the heir to the throne and the nobles want her to marry for political reasons. By her side is Keane, her captain of the guard and secret love. There are some threats to her life and for safety they decide to relocate to another palace. Unfortunately, this is what the evil queen wants! The story is about Lily finding the strength to do what is needed for her kingdom and herself. I loved how the seven dwarfs were incorporated into the story! So clever! I loved Iris, she is a fun one. Can't wait to see what she gets up to. Fun, steamy read with action, magic, and love. Clever retelling of Snow White! I was given the opportunity to read a copy of this book.
Read more
One person found this helpful
Helpful
Report abuse

Kathy Yaughn
5.0 out of 5 stars Great story telling
Reviewed in the United States on August 16, 2020
I love the world and character building of this series, I get very involved with these characters. I particularly liked that Lily rejected the "politically correct" suitors presented to her and chose the man she loved and had loved her in secret for years, thinking he could never have her due to his position. I also thoroughly enjoy the magical aspect of this series, can't wait for the next one!
Read more
One person found this helpful
Helpful
Report abuse

Steph E
5.0 out of 5 stars Evil Queen who?
Reviewed in the United States on August 13, 2020
Elizabeth did an amazing job bringing an exciting new spin to the classic tale of Snow white. Lily grows into such a strong woman, overcoming so much to save her kingdom. Keane is so dreamy, and I love the forbidden romance they have . I quite enjoyed the clever take on the seven dwarves as well. My fingers are crossed that we get to see more of Iris in the next installment of this series, she is a spitfire!

I received an Advanced Readers copy of this book and am leaving an honest voluntary review.
Read more
Helpful
Report abuse

LeMiliere
5.0 out of 5 stars A well-written retelling of Snow White
Reviewed in the United States on August 13, 2020
This was a well-written retelling of Snow White, in this version she has a secret love, in the Captain of The Guard Keane, but she's being pressured to make a political match, not a love one! Because of threats to her life, she is forced to relocate which is just what the Queen wishes her to do. But she's not without allies the Seven Dwarfs are there too!

Lily comes to realise her hidden strengths whilst on her journey of discovery in this magically fun, action-packed retelling.

I read an ARC of this book and am voluntarily writing my review.
Read more
Helpful
Report abuse
See all reviews

Kindle Customer
5.0 out of 5 stars Excellent
Reviewed in the United Kingdom on August 27, 2020
Verified Purchase
Really good sequel, couldn't put it down.
Read more
Report abuse
See all reviews
Back to top
Get to Know Us
Make Money with Us
Amazon Payment Products
Let Us Help You
EnglishChoose a language for shopping. United StatesChoose a country/region for shopping.
© 1996-2021, Amazon.com, Inc. or its affiliates