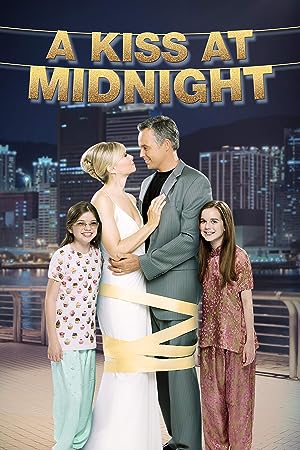 A Kiss at Midnight

(2)
6.21 h 28 min2008G
Faith Ford, Cameron Daddo, Hal Linden, Dyan Cannon. A young woman vows to become engaged by the next New Year's only to discover the man of her dreams is running an internet dating website that is taking customers away from her old fashioned match-making service. Closed-captioned.

Butterflymom54Reviewed in the United States on October 26, 2020
5.0 out of 5 stars
Awesome! Lovely movie
Verified purchase
I loved this movie. It was a great adventure of a story. It was encouraging, inspiring and educational. A single woman heading up a matchmaking business meets Dad with two daughters. An older yet very "young at heart" mother and business owner also meets the love of her life. A Nun, a horse, and dog all add to this great mix of love, fun, sweetness. All in time for a special New Years celebration. This was one of my favorite stories to watch lately. I appreciate that all of the stars are somewhat older. There is a diverse cast also. Out of the box and a great movie. I sincerely hope others who can appreciate a story like this will give it a try and enjoy it as much as I did. God bless!
One person found this helpful

H. BalaReviewed in the United States on November 7, 2020
4.0 out of 5 stars
absolutely, the two fans of the band Golden Owls should be together
Oh, no! Two competing matchmaking services, with the respective bosses falling for each other, not knowing that the other is their rival! How will they ever settle the business side of things? No, seriously, I want to know. Because by the end of the movie, I don't think that was resolved.

A Kiss at Midnight refers to a New Year's resolution that a despondent 40-year-old Susan Flowers (Faith Ford) makes. In the Valley, in California, Susan is the proprietor of Hearts & Flowers, a brick and mortar "personalized matchmaking service," to quote the company tagline. It's at a New Year's Eve party, where she's hanging out with some of the couples she'd set up (but she's there stag), that Susan writes down her resolution that by next New Year's Eve, she will have found the perfect man and that they'll kiss at midnight.

On a side note, her widowed mom (Dyan Cannon) is back home from her cruise and she brought Hal Linden with her. Mr. Linden plays Arthur Wright, a loud and boorish man and, apparently, the new love in mom's life. Susan's trying to be happy for her mom, but there's the whole loud and boorish thing.

Personal affairs of the heart aside, Susan's having issues at work. She'd been slowly losing clients over the past months, and she's finally figured out what's up. There's a new venture in the Valley, a huge corporation from Asia, and it's an online dating service called Romance-4-You.c0m. It's winning over customers - a lot of 'em coming from Susan's business - by virtue of its scientifically-based compatibility formula. Plenty of people are swayed by the convenience of letting the algorithms do the work for you. It eliminates the bother of going out and meeting people.

Susan thinks it's hogwash, plus her business is being threatened. She does what any normal, self-respecting girl would do if they were in a Hallmark movie. She registers for that same online dating service. At least she's honest about what she puts in her profile. She hopes to expose the site as bogus.

Josh Sherman (Cameron Daddo) claims to be good at computers. Maybe it's why the Asian group hired him as CEO of Romance-4-You.c0m. Like Susan, he's not seeing anyone. He's a widower of six years raising two little girls. But his girls aren't having it, his being single. They think it's high time there was a woman in the house. The brainy younger kid, Cassie, cautions him, "Interpersonal attachments are key to a healthy psyche," to which her older sis, Jennifer, rebuts, "You are such a freak."

It's obvious their dad isn't about to listen to them. So, there go the girls plotting away behind his back.

You should check out A Kiss at Midnight because it's a good rom-com from Hallmark. Absolutely, the plot is chock full of clichés and predictable turns. But it's got plenty of charm. Faith Ford turns in a winning performance, and the two little girls are adorable without being precious. I appreciate that the older girl doesn't make too much fun of her brainy, bespectacled little sister. In fact, older sis is the one who is more likely to go over to her younger sister's room to hang out. She appreciates little sis's brain. It also tickles me that Susan's best friend is a nun (Kim Rhodes) who doesn't hesitate to dispense dating advice.

If there's one thing that comes off jarring - and, remember, **plot spoiler** alert - it's the bonehead conclusion that Susan comes to immediately after her eleventh hour discovery that the guy she'd been dating is the CEO of her rival matchmaking business. The girls had already confided to her that they were the ones that orchestrated Susan's and their dad's initial "accidental" meet-up. But now Susan thinks the dad put the girls up to it with the intent of sabotaging her own matchmaking business?! Oh, c'mon, now.
One person found this helpful
See all reviews
Back to top
Get to Know Us
Make Money with Us
Amazon Payment Products
Let Us Help You
EnglishChoose a language for shopping. United StatesChoose a country/region for shopping.
© 1996-2022, Amazon.com, Inc. or its affiliates