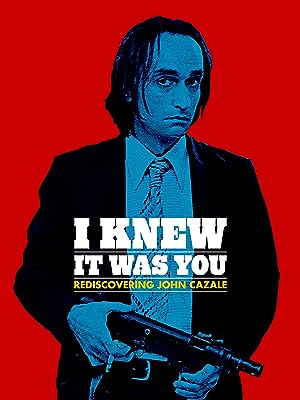 I Knew It Was You: Rediscovering John Cazale

ZozarrianReviewed in the United States on October 31, 2015
4.0 out of 5 stars
A worthy, albeit rather abridged, portrait of one of our best and most unsung actors, John Cazale
Verified purchase
**BE AWARE that if you rent or buy the digital version of this, you will not get to see the extras that some of the reviewers here referred to (such as extended interviews and a short film). Those are only included on the DVD. The documentary that is streamed here from Amazon is only 40 min.

With that being said, I did enjoy the film but felt that it should've been longer. It feels like an abridged portrait of his life and work. Perhaps I would've been satisfied with the extra features that come with the DVD, but without seeing them, I can't say. Because of it's short length and not being the most in depth of documentaries, I gave it 4 stars instead of 5.

I've been in love with John Cazale since I was a teenager and first saw him in Dog Day Afternoon, so I was really excited when I recently heard about this movie. I've been a huge movie fanatic since my teens and he has been in my top favorite actors ever since. I remember fervently seeking out every movie John Cazale had ever done and how shocked and saddened I was when I learned that his life had been cut short at such a young age. The 5 films he was in are all films that I've watched dozens of times (except for The Deer Hunter... I've only seen that a few times as it's pretty long and brings with it a hefty emotional load).

There is some great commentary from some of the actors and directors who worked with Cazale: Francis Ford Coppola, Sidney Lumet, Al Pacino, Gene Hackman, Robert De Niro John Savage and Meryl Streep (of whom was in, what seemed to be, a very loving relationship w/Cazale all the way until his untimely demise of lung cancer at 42). It stands to reason that he was hugely influential to, not just his colleagues and contemporaries, but probably also countless actors to come after him. Also interviewed are a few of those who most likely have taken a page from the Cazale school of acting book and who are also immensely talented in their own right (Steve Buscemi, Philip Seymour Hoffman and Sam Rockwell). They've become some of the best actors of my generation and it's wonderful to hear them talk about Cazale's influence. For obvious reasons, it's also very bittersweet to see and listen to Philip Seymour Hoffman, an equally brilliant actor who's life and, hence, career, was cut all too short.

I wish that all of the interviews had been longer, especially from his friends and family and those who worked with him.
You don't get a very thorough picture of his personal life, his background and what possibly shaped him. It just made me sad that his life and work are pared down to just 40 minutes. Just like his life, this film was much, much too short But, again, perhaps more depth is revealed in the extended interviews...
"Cut short" seems to be a running theme to this review!
Anyway, all in all, I'm happy that someone took the time to honor John Cazale's life and his brilliance as an actor and whether or not you're a fan or have just discovered him, this movie is worth the time.

HalKid2Reviewed in the United States on January 14, 2021
5.0 out of 5 stars
Helped Me Recognize GENIUS
Verified purchase
While I always admired performances by the late John Cazale, it was not until I saw this documentary that I came to fully understand the breadth and depth of his talent. Though only appearing in five movies (some with relatively small parts), he was able to make such an impression and show a kind of vulnerability seldom seen in men in movies. Included are wonderful interviews with many of Cazale's fellow actors, including his former girlfriend Meryl Streep, who speak openly about their admiration and love.
2 people found this helpful

John M. MillerReviewed in the United States on May 13, 2021
4.0 out of 5 stars
A stirring tribute to a wonderful actor who died way too soon
Verified purchase
This movie is a documentary tribute to John Cazale, who is remembered by movie lovers for his performances in the Godfather movies (as Fredo), Dog Day Afternoon, The Conversation and The Deer Hunter. He did a great deal of theater work as well. One of the touching aspects of the movie is seeing the tremendous respect and admiration that such fellow actors as Al Pacino, Phillip Seymour Hoffman, Sam Rockwell and Meryl Streep had for him and his dedication to and skill in acting. It's also very affecting hearing the circumstances of his death and how his family and partner at the time, Meryl Streep, stood by him through his difficult last days. Perhaps my only complaint is that the movie could have been longer--it would have been nice to have more actors interviewed about him and his work.

D. RichardsonReviewed in the United States on November 21, 2020
1.0 out of 5 stars
False description of DVD
Verified purchase
After being warned by another reviewer, I checked the product description and read that this DVD had a running time of 1h 43m. I received the 40 minute DVD. I contacted Amazon and all they could do was allow me to return it. DO NOT BUY THIS DVD unless you are prepared to pay for an item not advertised.
One person found this helpful

Mr. HawlywoodReviewed in the United States on December 27, 2013
4.0 out of 5 stars
Not a feature-length doc, but worth watching
Verified purchase
If you have a special place in your heart for Fredo in "The Godfather" and "The Godfather Part II," or for Sal in "Dog Day Afternoon," or Stosh in "The Deer Hunter," then you'd probably enjoy hearing his fellow actors try to describe the remarkable way this actor (who only worked in five films in six years before succumbing to cancer) brought a level of invention, commitment and heart to the set that gently caused all the actors around him to bring their "A" game. Just shy of 40 minutes, it doesn't fill a feature-film slot, but it's the right length for the material. Not sure why Amazon lists the running time as 104 minutes, it's actually 39. Enjoy.
7 people found this helpful

KyriakosReviewed in the United States on December 15, 2020
5.0 out of 5 stars
Must watch for all movie fans
Verified purchase
Great documentary with many of his famous friends and family. I could have watched five hours more. Cazale is just so fascinating to me. Just too bad about his early death.
2 people found this helpful

Y. MalenkyReviewed in the United States on May 25, 2022
5.0 out of 5 stars
Cazale was excellent
Verified purchase
I was always attracted to the movies he was in and the roles he played. I never understood why I loved him so much (or why he wasn't in more films) and this doc put words to it for me.

B. RobinsonReviewed in the United States on December 13, 2010
5.0 out of 5 stars
John Cazale Lives
Verified purchase
I loved this documentary. It was well done and the extended interviews are the real meat of this production which runs about 45 minutes, with extras it is over an hour. The amount of information about this wonderful actor is enlightening and shows the tragedy of this man's short life. Given that Pacino and Gene Hackman and other younger actors who didn't work with him speak so highly of the actor who played Sal in Dog Day Afternoon and Fredo in The Godfather movies, makes a very real life case that this was a genius who was taken from us. I cannot think of a better documentary about the insights into great acting. My only hope is that this brief piece of film inspires filmgoers to really see fine acting not just in the movies, but in the avant garde where Cazale lived, as shown by the delightful film shot by Fluxus artist Peter Moore, The American Way (also included in full in this package). Bravo to the makers of this work!
12 people found this helpful
See all reviews
Back to top
Get to Know Us
Make Money with Us
Amazon Payment Products
Let Us Help You
EnglishChoose a language for shopping. United StatesChoose a country/region for shopping.
© 1996-2022, Amazon.com, Inc. or its affiliates