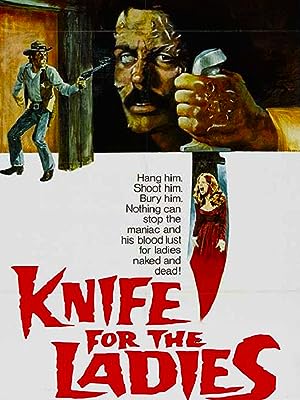 Knife For The Ladies

(11)
4.51 h 26 min197413+
A mutilating knife wielding killer haunts the small Southwest desert town of Mescal. Though most victims have been prostitutes, the first was Travis Mescal, the only son of the town's first family. When the Sheriff proves unable to solve the case, the town leaders invite Investigator Burns to unravel the mystery.

electroaddictReviewed in the United States on July 9, 2018
5.0 out of 5 stars
A Wild West Whodunnit
Verified purchase
I normally don't like westerns, but this one was definitely unique and entertaining. Amazon categorized this movie as "horror", and while there are certainly some horror elements here, I'd classify it more as a western murder mystery. A serial killer is terrorizing the small desert town of Mescal, bumping off the local prostitutes in a gruesome fashion. The sheriff (Jack Elam) is considered incompetent by most, so an outside investigator (Jeff Cooper) is brought onto the case. Elam and Cooper are forced to work together to bring the murderer to justice. Most of the screen time is devoted to other issues, like a secondary murder case, or the character building of Elam and Cooper's roles. Often that would be looked upon as a bad thing (simply "filler" to pad the run time), but here it works quite well. Also, the ending is beyond incredible... a reveal that pays off in spades.

KaseyGReviewed in the United States on February 19, 2017
2.0 out of 5 stars
Skip It
Verified purchase
I bought this to see Ruth Roman, who was so wonderfully wicked, chewing the scenery the previous year when she starred in 1973's THE BABY (buy it NOW!) but this movie is a big fail except for the last ten minutes or so. The script is dull and plodding with no real suspense or investment in any of the characters. When Jack Elam is the top-billed star you know you're in trouble. Ruth only appears in two scenes. This plays like a demented episode of LITTLE HOUSE ON THE PRAIRIE, crossed with MURDER SHE WROTE with just a small touch of Exploitation Cinema, but none of it works. AVOID.
3 people found this helpful

J. WestReviewed in the United States on August 30, 2018
1.0 out of 5 stars
Watched A Little Bit Then I Decided
Verified purchase
I love horror movies but not western horror movies. Blah.

Loretta MacphersonReviewed in the United States on June 19, 2016
5.0 out of 5 stars
Five Stars
Verified purchase
Everything was wonderful
One person found this helpful

free_laborReviewed in the United States on February 21, 2022
5.0 out of 5 stars
If you love 70s drive in movies...
This one is gold! Ok, it's not well acted, and I guessed part of the surprise ending right away, but that matters not!

It opens with a prostitute, sleepy from a hard nights work, who doesn't notice her murderer enter. He slits her throat--cut to title card. Next we meet our intrepid detective, Mr. Burns. He wants the case even though the pay is poor: he likes a challenge!

Another murder is committed, and a local boy fingers a latino horse trader. Some townies lynch him (#@$%ing racists). Mr. Burns arrives just in time to find the body and berate them for not following the rule of law. But the local sheriff is tired of having his toes stepped on (veteran character actor Jack Elam), so he challenges Burns to a punch out. The beat each other up until they become friends.

Meanwhile, someone is still knifing the "ladies"...

We meet a bunch of interesting characters, most of them get shot or stabbed, then the final gonzo ending. While Burns and the sheriff are discussing a new clue, they hear screaming and run to see what is going on...

I won't ruin it, but if you're a fan of gonzo 70s movies, this one delivers in the final act, and Burns, the sheriff, and his attractive niece (Diana Ewing, famous for playing Droxine in an episode of the original run of Star Trek, here in her last onscreen film role) get the next stagecoach out of town while "Evil Lady" serenades us through the final credits.

Most of the film is us following Burns around as he gets no closer to solving the murders, but it's mostly still fun as we meet an interesting cast of potential suspects (watching the mortician trim his nose hairs before going out is one of my favorite parts) leading up to the gonzo finale. Go ahead, eat something, wash your dishes, make some popcorn, then get ready for the final act. Be careful not to miss it though, there's virtually no warning until the screaming starts and then its over.

For those interested, this was produced by the infamous Bryanston Pictures, the mafiosos who gave us Deep Throat, Texas Chainsaw Massacre, Return of the Dragon, and Flesh for Frankenstein.

I'm not sure I can fully explain why I love these movies so much; I think it's mostly just because they don't care about your rules. Is this a horror film, a western, or a detective story? Yes, says the producers. Do we have any big stars for this? No, who needs stars!?! Roll camera! A drive-in somewhere needs a B movie and will buy this. And, back in the day, they did! And you never knew what you were going to get. If you ever wanted to see Jack Elam as the star of a horror-western-detective movie, your prayers have been answered!

B&S About MoviesReviewed in the United States on February 27, 2019
2.0 out of 5 stars
Boredom when it should be so much better
What if Jack the Ripper escaped and made it to the Wild West? Well, a knife-wielding killer has been slicing his way through the small desert town of Mescal. And while most of the victims have been prostitutes, the first was Travis Mescal, the only son of the town's richest family. The sheriff hasn't been able to solve matters, so the town's leaders bring in an investigator to get the job done.

Directed by Larry G. Spangler, who also produced and directed The Life and Times of the Happy Hooker, this is a rare horror Western.

It's got a great start and plenty of filler until the end. At least Jack Elam is in it as the sheriff. And Ruth Roman, who lights up The Baby. She's in this, too.

The hero detective - played by Jeff Cooper - has a 1970's haircut, which really makes no sense. Neither does this movie, which is unsure if it wants to be horror, proto-slasher, a Western or a giallo. It fails equally at each, providing only boredom.

Bill DragonReviewed in the United States on April 10, 2018
5.0 out of 5 stars
Fantastic
It's more like Jed the Ripper than Jack the Ripper in this distinctive proto-slasher western, as a mystery killer stalks the dusty thoroughfares of the greatly diminished town of Mescal. When Sheriff Jarrod (Jack Elam) proves incapable of catching the killer and allows some racist ‘yocals’ to lynch an innocent Mexican man accused of the killings, the townsfolk send for discordantly 1970’s coiffed out of town private detective Burns (Jeff Cooper). The detective employs his citified investigative techniques to reveal the killer, but not before clashing with and then teaming up with the old school Sheriff Jarrod. An enjoyable enough watch, A Knife for the Ladies exudes a TV movie ambience, but employs enough weird, nasty touches to lift it above average, although I can only imagine how great such a formula could’ve proved in the hands of an Italian film-maker during the period. Giulio Questi’s vastly superior Django Kill! springs to mind as a spaghetti western that stylishly employed horror elements. But beyond the slasher aspect what A Knife for the Ladies really has going for it is the interplay between Jarrod and Burns. Admittedly the younger detective is like some 70’s catalogue model lost in time, but Jack Elam is great as the grizzled Sheriff struggling with a new world crime in a town already left behind by progress.
4 people found this helpful
See all reviews
Back to top
Get to Know Us
Make Money with Us
Amazon Payment Products
Let Us Help You
EnglishChoose a language for shopping. United StatesChoose a country/region for shopping.
© 1996-2022, Amazon.com, Inc. or its affiliates