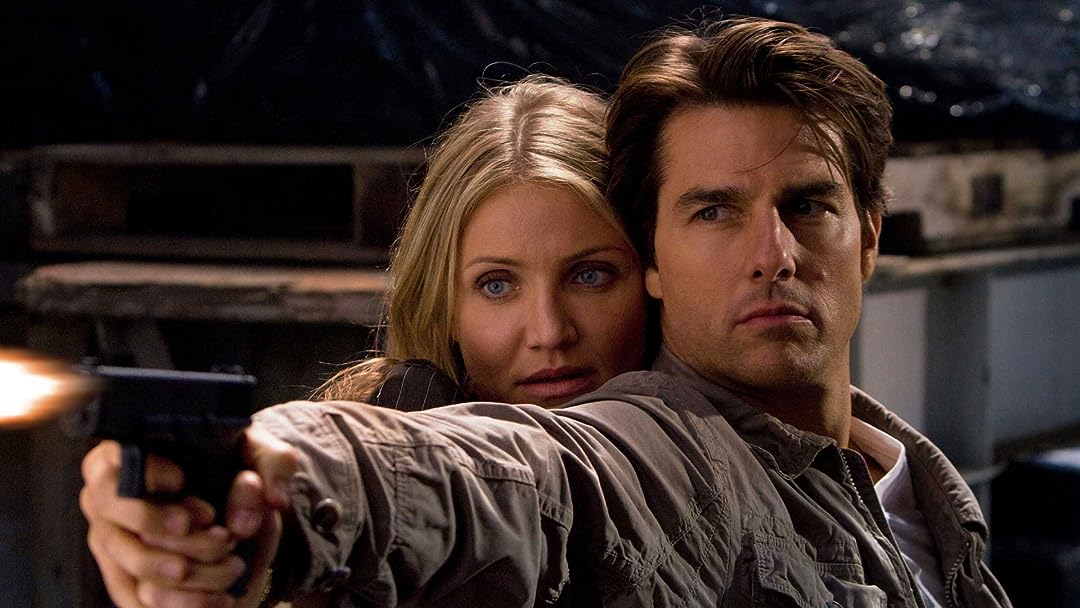 (8,360)
6.31 h 49 min2010X-RayPG-13
Tom Cruise and Cameron Diaz star in this thrill-ride about a small-town girl hoping she's met the man of her dreams, only to find out the mysterious stranger is a fugitive spy!

NV NikkiReviewed in the United States on September 2, 2015
5.0 out of 5 stars
PERFECT!! JUST WHAT I NEEDED. Go for it.
Verified purchase
I'm disabled. Mostly bed-bound. I search and search for a good well balanced movie ... tv series ... and after ten year of going from an athlete / bungee jumper etc... to being a bed-bound - high spirited, mostly sci fi geek. I came across this movie ... it is was fun, exciting and sweet all at the same time ..(I'm not usually big on "sweet" or "sappy" - . This movie is hard to place in a category.... as a rule, I don't usually go for most romantic comedies or the constant car chase - shoot'em up movies ... or horror movies ...or politically charged movies... so finding something for me is tough. I'm a sci-fy geek mostly ... with a little Top Gun / MI / and Downton Abbey thrown in from time to time... but THIS had a little bit of almost everything to keep me entertained without rolling my eyes like the snob I can be with movies.... while it will not win any major awards ... it helped me forget about my physical pain for a while.... I'm not even a huge Tom Cruise fan ... but have liked his MI series and other similar films such as the M.D. series: Borne Identity ... This ended up being so much better than I thought. Really. I don't write a lot of reviews ... but this one I had to... it distracted me from horrible physical pain and very few movies can detracted me from that kind of suffering. I was in a bad/sad mood when I started watching it and then enjoyed myself. I only wish I would have purchased this one from instant video instead of renting. Next time I'm feeling down with nothing to watch I might give it a second look... and I normally dislike watching a movie more than once .. I get board easily. Not sure why I liked this so much ... but I just loved it. Maybe t was just what I needed. Go for it!
102 people found this helpful

James Russell BaileyReviewed in the United States on January 25, 2021
2.0 out of 5 stars
Could have been great.....but is really a Throwaway Movie
Verified purchase
This movie had a LOT of potential: two good, solid actors, quality cinematography and ok choreography, great stunts and stunt directing, HOWEVER, the SCRIPT really SUCKED at certain times, leaving GAPING HOLES of both logic and story line!

Further, whoever wrote Daiz' parts left me wanting her character to be killed for the first half of the movie! When I'm rooting for the Bad Guys to kill one of the two main protagonists, the writing is BAD! She's supposed to be a hard core 'backyard mechanic' who really knows her stuff! This means she is LOGICAL to a fault when faced with conundrums. Later in the story line we learn she was 'raised like a boy, my father wanted sons'.

So, given that information how does her character react for the first half of the movie? LIKE A LUNATIC who is nothing but bat crap CRAZY!

During the SECOND HALF of the film, her character displays the EXACT persona traits she SHOULD have evinced during the FIRST HALF....but without ANY real core transition! The scene where she goes ape with the machine pistol is a prime example! OVERDONE, OVERPLAYED, and severely lacking of any coherence or believable traits!

There were some really GREAT bad guys in this, especially the murderous behaving CIA lead bad gal; illustrating why Fed Alphabet agencies should never be trusted (neither in the fictional world, nor the real world). The actress did a marvelous job of making her role 'real'; kudos to her.

Bottom line: this film COULD have been every BIT as good as ANY of the better 'Mission Impossible' films, however, because of truly lackluster writing for the first half of the film, and a severe hole in 'continuity' this thing becomes a 'throwaway' movie!

Cheers from the Oil Patch in Central WY

joel wingReviewed in the United States on December 22, 2020
3.0 out of 5 stars
Good action-comedy as they have fun with their precarious situations
Verified purchase
Tom Cruise runs into Cameron Diaz at an airport. They both end up on an airplane together with hardly anyone on it. It turns out all the other passengers are killers out to get Cruise. Thus starts Knight and Day meaning that the movie is about the characters being complete opposites joining together in this action-comedy.

The style of the movie is to put the two characters in a bunch of dangerous and ridiculous situations and have some fun with it. For instance, Diaz is with federal agents in a car who all get shot by Cruise. He jumps on the hood and keeps asking Diaz to unlock the door so he can get in and rescue her as they are barreling down a freeway with gunmen behind them and Diaz driving from the backseat with a deadman pushing the gas. Another thing Cruise does is constantly drug Diaz out in stressful situations when she’s not dealing with them well. Every time she wakes up she’s in another place.

eeeeevaaaaaaReviewed in the United States on December 19, 2020
5.0 out of 5 stars
Fun, silly, action romcom
Verified purchase
I never knew how much I needed Cameron Diaz and Tom Cruise as a couple in my life. When you think about it, they're the perfect onscreen pair. Age appropriate, mega stars, both really into action-y stuff in real life...although Tom Cruise is the OG with this. Chemistry seemed forced at the start but was really convincing about 1/3 of the way through. This was just adorable and fun. I've never personally been taken with Tom Cruise but he was a fox in this. Cameron Diaz played this very truthfully and the dude from Little Miss Sunshine was such comedic release gold. Like many feel-good Cameron Diaz films, I would watch this again and again. It's a real gift to have something so purely lighthearted and entertaining. 10/10 from me.
12 people found this helpful

Thoughtful ConsumerReviewed in the United States on January 10, 2021
1.0 out of 5 stars
5 Stars for Idiot Camp... Negative 5 stars as an Action, Romance Movie
Verified purchase
This is what I would call an idiot camp movie. I enjoy funny, slap-stick humor, or just plain goof ball comedy with some action thrown in. This one unfortunately is neither. If it was over the top campy like Airplane or National Lampoons, ok... or if it was like Jackie Chan comedy-action, ok. This is like re-microwaved three-day old cold vomit. Tom Cruise is unlikable (too cool to be breathing), and Diaz, shockingly, is even MORE unlikable (anytime anything goes, she become hysterical). Lots of unnecessary violence (deaths), that is pointless. It would've been a better movie if they made a joke of it... 10 million bullets were harmed in making this movie, and no one dies/get's killed via all the action sequences (which would've made for a better comedy). Aside from the poor writing, and over the top special poorly devised action sequences (such as when Cruise is on top of the roof a mom mini van, and then jumps on the roof of Diaz's car in the freeway going the wrong direction. Ugh, so is the mom mini-van also driving 55 MPH on the wrong direction of the freeway so Cruise can jump over to Diaz' car?) I will say, given this movie was done in 2010, both Cruise and Diaz are in peak physical condition, and they do show that off. Unfortunately, one of the characters is a butter-face. I would not recommend this movie, unless you are just trying to watch all the movies from a certain actor/actress (just to say you can). It's not worth your time or effort otherwise. Not recommended. Bonus: I did like the Rolex product placement though (Diaz' watch).
11 people found this helpful

Madison BReviewed in the United States on October 14, 2019
4.0 out of 5 stars
Fun feel good movie
Verified purchase
I had never heard of this movie before it showed up on my recommended list and I ended up enjoying it quite a lot.
Without giving away the plot, I can say that this was a very cleverly written and fun movie. Cameron and Tom were fantastic together and, by my estimates, they put all their effort into these two characters. The story isn't groundbreaking by any means, but the movie does offer a ton of chemistry between the couple.
Even though many of the scenes are a bit exaggerated and over-the-top, it didn't bother me at all since this is definitely a 'fantasy' romantic comedy.
Knight and Day is a fun feel good movie which will keep you smiling through until the end.
18 people found this helpful

pounamuReviewed in the United States on July 4, 2016
5.0 out of 5 stars
Is it incredibly fun and worth seeing
Verified purchase
Is this movie silly? Will you have to basically forget that disbelief even exists? Yes.
Is it incredibly fun, clever, and worth seeing? Also yes!
Tom Cruise and Cameron Diaz are both incredibly charismatic actors, and they bring this charisma full on to this film. Add to that gorgeous locations, fun action sequences, and a fast-moving (thought not particularly credible) plot, and you have a good way to spend a couple hours. This is a great date / netflix & chill movie because everyone will find something to enjoy in it. Tom Cruise and Cameron Diaz are both likable and share an easy rapport. His chemistry with her isn't the powerful, palpable sexual one he has with Rebecca Ferguson in the latest Mission Impossible movie. But it is friendly and effortless. Cameron Diaz in particular is enjoyable. She does a great job showing the bewilderment and fear of a normal person who gets caught up in crazy circumstances. And while she does need to get rescued many times and spends much of the movie dragged around by the hero (not something I enjoyed), she does have some smarts of her own and eventually grows into someone who is just as kick ass as him.The humor in the film is clever and light-hearted, but there are also nice, intimate moments for the two leads where you can see the unexpected depth in the characters. You can especially sense a wistfulness in Cruise's character, a longing for a life he has missed. There is no deep drama here, but just enough substance to give the characters an extra dimension.
Fun, enjoyable, and a movie that both men and women will like. Recommended.
29 people found this helpful

batpoxReviewed in the United States on October 25, 2021
1.0 out of 5 stars
Maybe the worst movie ever... certainly the worst with Tom Cruise
Verified purchase
Mr. Cruise usually picks great scripts. How is it possible he is in this? (1) lost a bet with God (2) they were holding his kids ransom (3) blackmailed... big time. This is impossible. Big budget with no script. Sorry, the script reads like this: Pick an expensive location, bad guys with automatic weapons everywhere but no one can hit Cruise, and he picks them all off with revolvers. Bad script, bad directing, horrible dialog, good actors gone bad. Sorry.
6 people found this helpful
See all reviews
Back to top
Get to Know Us
Make Money with Us
Amazon Payment Products
Let Us Help You
EnglishChoose a language for shopping. United StatesChoose a country/region for shopping.
© 1996-2022, Amazon.com, Inc. or its affiliates