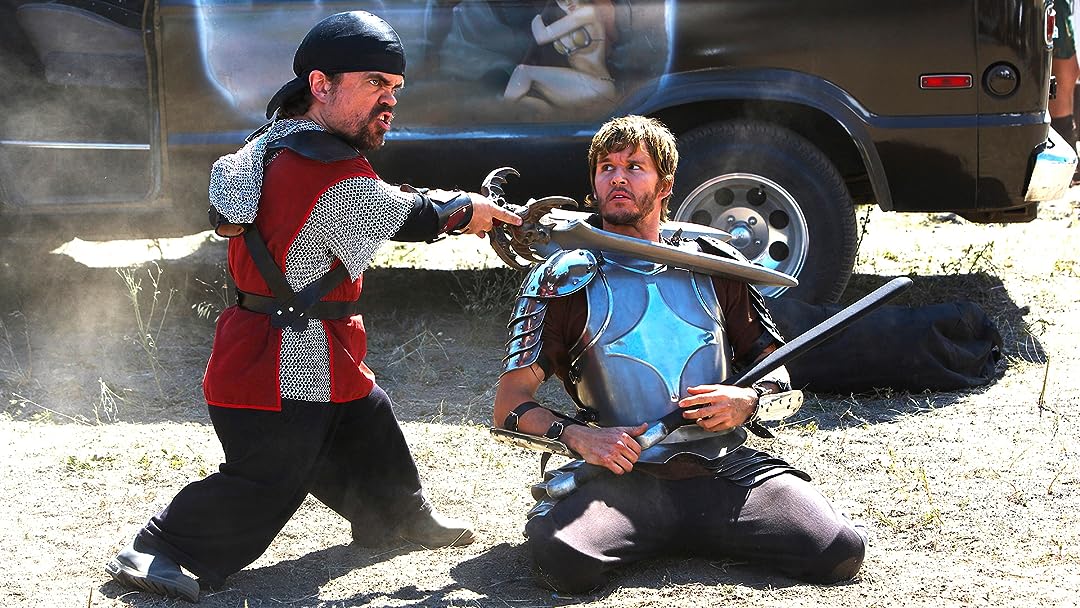 (1,178)
1 h 25 min2014R
Live-action role players conjure up a demon from Hell by mistake and they must deal with the consequences.

James E. AddisonReviewed in the United States on May 23, 2021
5.0 out of 5 stars
Had to give it a 5 star via my own star ratings.
Verified purchase
1 star: couldn't watch more than 15 minutes. Unwatchable!
2 star: jumped my way to the end for the ending. Unwatchable, but interested in how this turd ended.
3 star: watched it all, but not happy about it. Nothing better to do.
4 star: I watched it, liked it well enough. Would never watch it again.
5 star: Great moving picture show! I'll watch it again, and maybe again in a few years.

This is one I watched a few years back, and I watched it again today. So it's a stand up 5 in my book. Best production, no. Best acting, no. Enjoyable, yes.

VargrReviewed in the United States on September 6, 2021
1.0 out of 5 stars
What a stupid movie
Verified purchase
So, I watched "The Big Lebowski" in theaters, when it was released, and I hated it. Years later, at the behest of friends, I watched it again and fell in love with it. I saw this movie in theaters as well, and hated it, like i thought this was the worst movie ever made.

So, accepting that I can be wrong, and opinions evolve... I saw all the positive ratings for this when it went on prime and thought "maybe I need to watch it again?" I'm so sorry I did, this movie is terrible. It's the worst, low budget, hack writing, unfunny trash I've ever watched twice.

Don't believe these 4-5* reviews, there is nothing funny about this film. Save yourself the trouble and watch the other Ren Fair movie with Stiffler in it.or try "The Wild Hunt" if you want something that's set in this exact kind of fantasy community but is engaging and human.

MongorReviewed in the United States on May 10, 2019
2.0 out of 5 stars
Lots of blood and guts. Not what I was expecting.
Verified purchase
I like to give all movies a chance. If I buy a horror blood and guts movie "Which I don't" I dislike them. Then that's what I expect to see. This movie caught me off guard. I thought it was going to be a comedy spoof of a d&d genre. Though it had that role play element in it, what I saw was body dismemberment and lots of blood and guts. On top of that the music was heavy metal type. I dislike that too. Anyways to me this was a low budget horror flick I wasn't expecting. :( Not for young impressionable kids to watch. If you like lots of blood and guts then this is for you. If you wanted fun D&D comedy, you might want to avoid this one. Just my opinion. I tried to rate higher but just couldn't.
10 people found this helpful

KirbsReviewed in the United States on February 11, 2018
5.0 out of 5 stars
Be prepared for something entirely different.
Verified purchase
I don't even know what to say, I was completely floored by this cinematic masterpiece. If there was ever an official larping movie, a true poster child for active role play warfare, this would be it. A lesser-known movie starring some very good actors, such as Steve Zahn and Peter Dinklage, I found it a raucously good time throughout the film.

What at first begins as just another weekend for these friends, quickly turns to literal hell on earth when a shapeshifting demon is let loose onto the woods where their larping is taking place. They must band together (pun intended) to face death, terror, and awkward demon sex to save their friends and fellow larpers!
14 people found this helpful

Reasonable ReviewerReviewed in the United States on September 28, 2015
5.0 out of 5 stars
Fun movie with an all-star cast - not Academy Award material, disengage film critique, engage fun!
Verified purchase
This movie is awesome! If you are a gamer or know a gamer and can enjoy a movie that is not going to pose deep philosophical issues then this is a great movie for you.

It is in-line with movies like "Unicorn City," "the Last Lovecraft," and "Dorkness Rising." If you saw and liked these films then again this film is for you.

If you despise gamers, geeks, and anything not on NPR then you will *hate* this movie.

First, your expectations have to be in the correct range.

This is not game of thrones level film direction and script quality. This is an all-star cast in a movie about geeks doing geeky gamer things. You can tell from the clear ad libs that many of these stars have been in gaming venues previously and liked it.

Nothing is sacred in this movie, and, while the jokes are discrete, many of the politically correct things in these current United States are poked at pretty shamelessly.

Second, don't fall in love with any particular character -- most of them are killed off by the middle of the film. Just say'in.

EinsatzReviewed in the United States on June 13, 2020
3.0 out of 5 stars
“With such name as Nevermore.”
Verified purchase
People dress up and attempt to act medieval in and around Spokane, WA. During playtime a real spell is accidently cast by a complete idiot resulting in mayhem and murder for the attendees at a LARP event. Heads are torn off, body parts eaten, and then a monster shows up.
This was meant to be a comedy-horror movie. I suppose if you find such things funny you might like this. I found it to be silly and not amusing, gore filled and yet not ‘horror’ in its truest sense. Eh. I didn’t like it or hate it.
4 people found this helpful

Avid readerReviewed in the United States on October 30, 2021
2.0 out of 5 stars
Silly and stupid
Verified purchase
What one has is a group of adults playing role model fantasy games, in costume and pretending to battle it out for points, acting more like children. And Gunther is always in character. It starts to get monotonous, as one is waiting for any of the characters to start acting like an adult. One of the masters finds a book, and says a spell which summons a demon from the netherworld. She then starts to kill participants, and they don’t handle it well. One says to call the sheriff, and the sheriff calls his fellow rednecks who don’t like the fantasy players, and they go armed with paintball guns to fight the players, not knowing a real demon has been summoned. One of theother leaders wakes up, and calls on his horn to battle, and the rest of the players assemble with their foam and rubber swords to do battle. They don’t know there is a real demon that will kill. The demon is totally ridiculous as a person in a suit. And there is over the top dismemberment with blood splattering. Fortunately, it is near the end. A real problem with the movie is that it is difficult to believe anyone would continue to act so stupid when faced with what is happening.

Jim TrentReviewed in the United States on January 19, 2022
4.0 out of 5 stars
Put off watching because I thought it looked stupid
Verified purchase
It turned out to be rather good. The acting was good and all of the actors have acting experience so it went well. Perhaps I put this off because I have gone to a couple of game cons and saw the vast majority of the people who are into LARP and even D&D/role playing. For the most part, they were pretty fair on the nerdiness of the people. LARP though went even further down the rabbit hole. I always thought about trying it but my reasons were not pure. Believe it or not, there are some hot women that are into LARP. But I couldn't bring myself to do it just for the women.

The special effects were a little cheesy but I wasn't expecting millions of dollars on fx for something like this. The end monster looked like a guy in a rubber suit like the old Godzilla movies. If you are OK with role-playing and LARP as the main background the movie is a decent watch. Just remember to go in expecting what the movie is and don't expect it to be anything else and you will find it enjoyable. Cheesy but enjoyable.
See all reviews
Back to top
Get to Know Us
Make Money with Us
Amazon Payment Products
Let Us Help You
EnglishChoose a language for shopping. United StatesChoose a country/region for shopping.
© 1996-2022, Amazon.com, Inc. or its affiliates