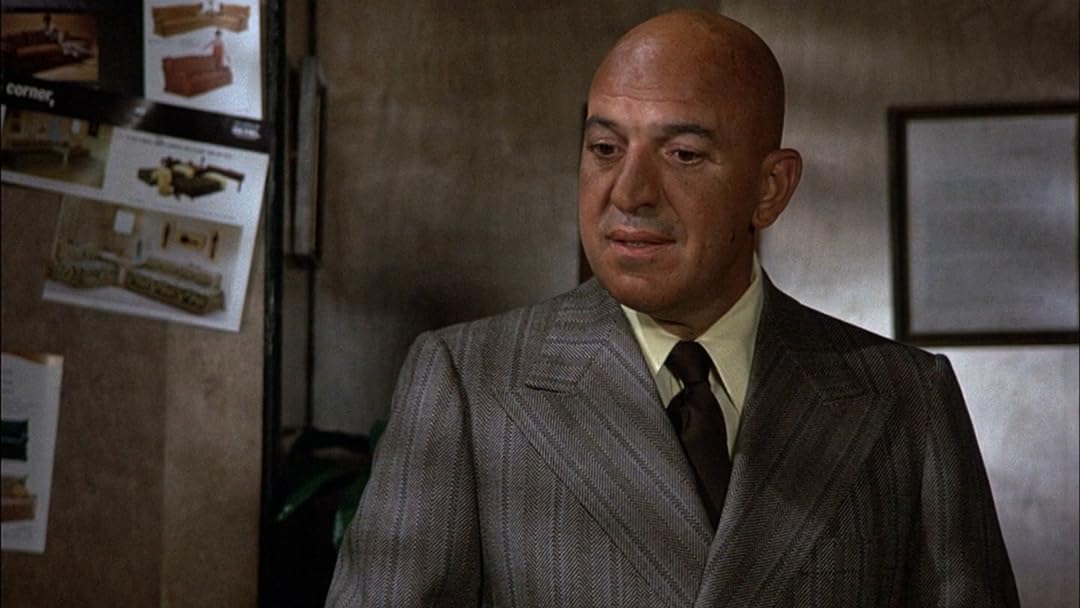 (513)
7.1197513+
"Who loves ya, baby?" Telly Savalas returns as the lollipop-packing dapper detective Theo Kojak in another unforgettable season of the renowned mystery series.

* Columbo is the shuffling, blue-collar police lieutenant thrown into rich, polished LA settings. Kojak is the impeccably tailored police lieutenant who strides New York's mean streets as though he owns the town.

* Both shows work within the sphere of homicides. "Columbo" works the inverted mystery: We know whodunnit. Howcatchem? "Kojak" is standard police procedural.

* "Columbo" prided itself on showing very little violence, with no screeching tires and car chases. "Kojak": varying levels of violence in every episode, with lots of burnt rubber and vehicular acceleration.

* Both shows are star-turns with eccentric characters in the lead. There's a difference. Peter Falk seduced you by underplaying; his unassuming character suckered his adversarial villains, played by high-profile stars. "Kojak" has some memorable guest stars, not all playing heavies, but the entire show pivots around Telly Savalas. Neither show would have worked without their headliners.

By general consensus the first season of "Kojak" wasn't very good. It's with this second season that the pieces began falling into place. Savalas had found the shtick that made his character work. The cast gelled around him. The stories got better. Highlights are "The Best Judge Money Can Buy" (script by Gene Kearney; guest starring Walter Stocker and John Aniston, Jennifer's papa); Kearney's "A Killing in the Second House" (guest starring the always reliable Martin Balsam and Dimitra Arliss ["The Sting"]); "The Betrayal" (script by Joseph Polizzi; guest starring Paul Anka); and Jack Laird's terrific "Elegy in an Asphalt Graveyard," which opens and closes with a ballad sung quite well by Savalas himself. Also winning is "Queen of the Gypsies," a caper with a poignant twist, whose guest star Zohra Lampert won an Emmy for her performance. A few episodes are weak, but I'd be hard-pressed to say that any of the twenty-five are outright dogs.

Shout! reliably delivers clean video and audio, with no problems in manufacture. The same is true here. Regrettably there are no special features.

How much you'll like "Kojak" depends on your threshold for gritty crime dramas, à la Ed McBain's 87th Precinct, and your tolerance for Telly's sucking not only Tootsie Pops, but also the scenery when not chewing it outright. To give him his due, he doesn't pull Shatners or pitch everything at Jack-Lord intensity in "Hawaii Five-O." His charisma flows often from simply staring, turning surprisingly gentle, and a sense of humor. Kojak was a career-defining performance, for good reason. Savalas makes these episodes rewatchable. His line deliveries are works of art.

UPDATE (07.25.22): I've reconsidered my comment about Savalas's scenery-sucking. That was a cheap shot. Kojak is a flamboyant character, but Savalas leavens sarcastic wit with sincerity, toughness with tenderness, and world-weariness with a rock-bottom integrity. Rest in peace, Mr. Savalas. Who loves, ya? We did—and still do.

Amazon CustomerReviewed in the United States on July 31, 2022
5.0 out of 5 stars
It is a great show .
Verified purchase
I love old T.V. shows .
One person found this helpful

Ronnie CicaleseReviewed in the United States on July 21, 2022
5.0 out of 5 stars
Best show
Verified purchase
Who Love's ya Baby

Ratzo RizoReviewed in the United States on October 20, 2011
5.0 out of 5 stars
Superior Picture Quality From Shout Factory...Meow baby
Verified purchase
I like many other fans bought the UK release as I live in England, but on hereing about This Shout factory Dvd and all that I read I just had to buy it and I must say this version is amazing. What I undersatnd about old T.V. shows is they are filmed in 35mm then its transfered to 2.1/4inch Video for television Broadcasting but they make hundreds of copys to ship around the networks/world and all these large format videos can rot after a time if not looked after, much like 35mm film, so unless its restored it will not work well as we've seen from Mediumrare UK season 2 & 3. but 4 & 5 are very good. Theres no info on any remastering on this Shout DVD but somthing has been done as its so very good, colour dos not bleed picture is much clearer shaper and the sound is much improved. After its been shown many times the Video tapes are returned to the studio where the just get stored this info came from worker in the industry some years back so I recon there must be some truth in this, I`m not in the bizz but I`m sure theres people out there who know, I like everyone whos a fan have waited so long for KOJAK to comeout so I can't recommended this enough its a well worth the purchase enjoy.
Back in the 70s a T.V. Special was made on the making of Kojak and it had interviews with all the actors and loacation filmimg. the set thats Kojaks office and the squad room was infact an old factory in New York which once filming had ended it was pull down but for those who have shaper eyes will noties that as the seasons go by the Squad room changes size pehaps they moved some of the filming to another loacation, I remember seeing an a eposide being made and Telly salavas had to step over all the cables on the floor used for the filming, it would be so very cool if that show could be found it must be out there some place but I can`t remember who made it. Once again the filming around New York is amazing.
Theres no other show I can think of that had such amazing Scriped Telly Savalas had most of the best lines and I find myself quoteing them, in parts very funny lines also the storys where very good as well, so all in all a Superb show many shows have tryed to copy the style of KOJAK but to me failed Kojak to me is the BEST. Thank you SHOUT for this and try and find that television Special.
2 people found this helpful

HonkyTonkManReviewed in the United States on October 1, 2015
5.0 out of 5 stars
Kojak: Season Two
Verified purchase
"Kojak" was such an electrifying, sensational and unique detective television series.

Telly Savalas was perfect in the role of Lieutenant Theo Kojak of the New York City Police Department.

Here are the exact running times for all 24 episodes from "Kojak: Season Two" on this Shout! Factory DVD release.

All 24 episodes from the second season of "Kojak" were presented in uncut form on this Shout! Factory 6-disc DVD set.

The picture quality is tremendous and the audio quality is super too.

Mike W.Reviewed in the United States on May 29, 2012
4.0 out of 5 stars
Good Stuff!!
Verified purchase
Overall, I'm happy with the work Shout! did on this release of Kojak: Season Two. I've noticed a few visual imperfections here and there, but that's nothing! Insignificant. Overall the picture is clear and the sound is good (I watched it on my Dell computer). If you have (or have seen) the first season of Kojak on dvd (from Universal) and were satisfied, you should be satisfied with this one, too. Disregard the early reviews (regarding visual quality). Also a good thing is that season two was released on single sided dvds, not double sided dvds (see photo), like with [[ASIN:B00005JNHT Kojak - Season One]]. Single sided is the way to go, and it's much more professional in my opinion.

Kojak: Season Two covers episodes shown on TV from September 1974 to March 1975. And the episodes are GOOD! The ones that really stood out to me are: "The Chinatown Murders" (Sept. 1974), "Hush Now, Don't You Die" (Sept. 1974) "You Can't Tell a Hurt Man How to Holler" (Oct. 1974). But in my opinion ALL the episodes were good. There was action, suspense and good storylines. The acting was good also and Telly Savalas shines as Lieutenant Theo Kojak.

I've watched all 25 episodes of season two and I'll say this: Love the music, love the action, and love Kojak!

If you were a fan of the original Kojak series or like good police dramas - Buy it!

P.S. I do have one small issue with the Kojak show (has nothing to do with shout!). On disc three: episode "Souvenir from Atlantic City" (Nov. 1974), near the end an actor gets shot and dies (supposedly). Kojak and Daniel J. Travanti (Hill Street Blues) say few words and then the camera pulls back to a wide shot, the actor just shot can still be seen. He's lying on the ground. The camera pulls back, and then stops. Then actor who was shot and was supposed to be dead in the scene - moves! He lifts his head up, seems to look around, and then puts his head back down! The guy was supposed to be dead now! In my opinion that part should have been shot over again! I know it seems a trivial thing, but that slip up took me out the story.
One person found this helpful

R. J. HallerReviewed in the United States on December 2, 2021
5.0 out of 5 stars
Kojak rocks!
Verified purchase
This police series showcases the tremendous talents of Telly Savalas. I have since purchased all five seasons of the Kojak show and am well pleased with all of them. Also the TV movie set to round out the collection. Technically, the series show very well the sound and color are excellent. Also, as it was filmed on the streets of New York, it gives a glimpse of the Big Apple as it was in the 70s. Enjoy!
3 people found this helpful

MCBEADSReviewed in the United States on March 14, 2022
5.0 out of 5 stars
Always an old time favorite
Verified purchase
DVD's were great...... LOVED how the so called commercial's are blipped out.......
See all reviews
Back to top
Get to Know Us
Make Money with Us
Amazon Payment Products
Let Us Help You
EnglishChoose a language for shopping. United StatesChoose a country/region for shopping.
© 1996-2022, Amazon.com, Inc. or its affiliates