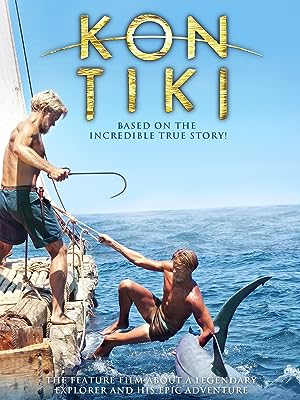 (552)
7.21 h 36 min2013X-RayPG-13
Based on the Academy Award-winning documentary, KON TIKI is the story of legendary explorer Thor Heyerdal's epic crossing of the Pacific on a balsa wood raft in 1947.

GryphonisleReviewed in the United States on January 29, 2019
4.0 out of 5 stars
Entertaining, Somewhat Factually Challenged. Lots of Male Eye Candy.
Verified purchase
So a handful of descendants of the Vikings build a balsa raft in 1950 Peru and sail it to Tahiti to prove that Polynesia was settled not from the West, by Asians (paddling against the current), but from the East, by Peruvians, or someone along the line of the Inca's. Having just survived the first class disaster and life altering epic that was WW2 they have rather improved priorities over the average person in the audience today and they all work together so not a lot happens.

In short, what a boring picture from the standpoint of the writer and director. Not even a single near-naked woman to parade about, just lots of white guys with no body hair who still manage full heads of blonde hair and beards to die for. So, they swap out the athletic "Black Norwegian" who didn't have blonde hair and made him a panic stricken tubby---the only guy on the boat who isn't tall and thin and gorgeous, but of course! If Nazis had come out of the sharks belly you could bet they would all be bald. Such is Hollywood, even when it's a Norwegian film.

Ah well. It's a fairly fast paced film, there are sharks and amazing glowing creatures at night, and eventually they end up in Thailand, well beyond Polynesia, but, well, you know, Hollywood and all that. And lots of near naked descendants of Vikings to look at.

Hey, after all these years, decades, it made me want to read the Heyerdahl book on which it's based. And Amazon is streaming the original documentary on which this is based, too!

KatherineReviewed in the United States on May 24, 2021
5.0 out of 5 stars
Fantastic, mostly action movie that could also be a bit of a character study...
Verified purchase
Awesome movie... The visual effects are incredible!!! I actually felt like I was right there on the raft with them... Even though I already knew what was going to happen in the end (it's based on a true story), this film had me on the very edge of my seat the entire way!

I enjoyed that we get to know all of the characters a bit, as they are stuck on a raft together. Facing survival at all costs, with only each other, a bird, and mother nature. As they chase one man's dream across the ocean, they learn lessons of humility, trust, growth, strength and the very best of human ingenuity.

If you are looking for a historically accurate, action-adventure story that is jam packed with stunning visual details and sprinkled with a bit of drama along the way, then this movie is for you; at any age! For me, it was worth paying the rental price!

BobbiReviewed in the United States on May 23, 2021
1.0 out of 5 stars
YAWN.......!!!😴😴😴
Verified purchase
YAWN....!!!!! Terrible movie. Hard to hear. Not engaging at all. Characters aren’t relatable in any way. SO unrealistic. At one point, a guys bird gets eaten by a shark so the guy reaches in the water and pulls the great white on board their raft by the TAIL! Come on now!! But, sadly, that was the most exciting part of the movie. This is supposed to be a true story.
This was $10 and two hours down the drain.
One person found this helpful

Nora HagueReviewed in the United States on December 26, 2014
3.0 out of 5 stars
is one of my all-time favorite books, but this movie
Verified purchase
"Kon-Tiki", by Thor Heyerdahl, is one of my all-time favorite books, but this movie, alas, did not live up to the book's standards. Part of the problem was the lead, Pal Sverre Hagen; while he wasn't necessarily bad, he didn't come close to embodying Heyerdahl's impressive zeal, good humor, and leadership qualities. This isn't entirely his fault; the script didn't help, choosing to focus on a made-up bit of drama (was Heyerdahl right in theorizing that the current and trade winds would carry the Kon-Tiki to the South Pacific, or was the raft destined just to drift out to sea?) and then parlaying this into a conflict amid the crew. The film would have done better just to focus on the sheer adventure of the Kon-Tiki's voyage; there is enough of that to fill two reels, if they're shot well. And that was the other problem: much of this film looked as if it was shot in a bathtub. I'd recommend the actual black-and-white footage of the real Kon-Tiki epic over this reproduction. You get to see Heyerdahl and his crew in action, and even the lack of color doesn't take away from the wonders they encounter as they drift from South America to the South Pacific under the billowing sail with ancestor-god Kon-Tiki's red-bearded face painted on it.
12 people found this helpful

rainmakrReviewed in the United States on January 5, 2014
4.0 out of 5 stars
Good for kids
Verified purchase
I'm casually familiar with the Kon Tiki story, and have not read the book. I had seen something on TV about his movie while traveling and it piqued my interest. I finally purchased and watched the blu-ray version this week.

Because I haven't read the book, I can't say if the movie followed the true story or not. I can say that I enjoyed the pace of the movie and appreciated how it sounded on my home theater with a recently upgraded subwoofer. The english version is short, about an hour and a half, but is a good adventure story.

My 10 year-old daughter watched the entire movie with me (though we fast-forwarded through a bloody scene at the 1 hour mark). Because we got a late start and her bedtime came to soon after we began, we watched in two sittings -- the first 30 minutes (when financing and crew were being secured) followed by the rest. I was surprised that she came back since the first half hour was mainly dialogue; but, I had told her the basic plot so I think that helped keep her interest. After it was over she said that she really liked it.

My 6 1/2 year-old son did't stick around too long during the first 30 minutes (dialogue); but, he did sit still for the entire second sitting. The fact that he sat still says a lot and I was quite surprised.

Over all, a great adventure story and good family movie. I recommend skipping a few minutes at the 1-hour mark (english version) if younger children are watching. There is also *some* mild profanity but nothing too concerning.
5 people found this helpful

dziadeckReviewed in the United States on January 3, 2015
5.0 out of 5 stars
Kon-Tiki lives!
Verified purchase
I first heard about Heyerdahl back in high school and in college I read some of his intriguing books. But I really didn't know what to expect when I bought this film.

This is a great adventure story told with intelligence. The ensemble cast is excellent. Production values are top notch front to back. Beautifully photographed with a fine score. The visual effects are seamless and they all enhance the story. The image and sound quality is first rate -- really doesn't get much better than this.

There are a number of extras and they're all good. I wish they would have included Heyerdahl's original documentary film, which won an Oscar for Best Documentary in 1951.

This is an excellent and very highly recommended!

ps If there is any flaw in the presentation it's the disc cover graphic which looks like a throw away from some reality show. Visually, it makes little sense for this film. Don't judge a film by its cover. Anchor Bay tripped up here. They should have used one of the original movie posters, perhaps something like this which is more reflective of the film's subject -- http://thebenshi.com/wp-content/uploads/2013/07/1.jpg

BReviewed in the United States on September 25, 2016
5.0 out of 5 stars
Probably one of the most amazing things you will watch
Verified purchase
Absolutely stunning in every way. I watched this with my 13 year old son, he then wanted a globe. Now he's fascinated with ocean currents, the Polynesian islands, bought the book The Ra Expeditions, Hawaii, is fascinated by ancient history and genetics. This movie sparked something that is magical...
9 people found this helpful

TXMomma 22Reviewed in the United States on November 12, 2013
5.0 out of 5 stars
Beautiful and gripping tale on the seas!
Verified purchase
I loved this movie, it was beautifully filmed and acted. I had the honor of working with Thor Heyerdahl later in his life, so this was very interesting to see a dramatization of his most famous expedition. While his theories may not have had significant support in the arcaheological world, his determination to test his hypothesis by going out on a raft with five brave companians showed spirit and devotion to examing possibilities. This dramatization took a number of liberties with the story, for instance refrigerator salesman Herman was a very dedicated scientist and not as doubtful as the movie suggests but I guess they needed some tension. The actors are all wonderful, brilliant in their roles (and not hard to look at either, not that this should matter!). Definitely a great introduction to the life and times of Thor Heyerdahl!
6 people found this helpful
See all reviews
Back to top
Get to Know Us
Make Money with Us
Amazon Payment Products
Let Us Help You
EnglishChoose a language for shopping. United StatesChoose a country/region for shopping.
© 1996-2022, Amazon.com, Inc. or its affiliates