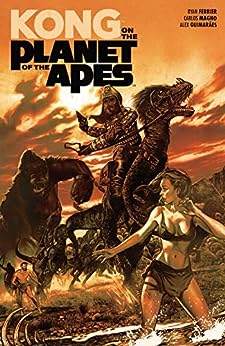 Kong on the Planet of the Apes Kindle & comiXology

by Ryan Ferrier (Author), Fay Dalton (Cover Art), John Keaveney (Cover Art), Carlos Magno (Artist), Alex Guimarães (Colorist) & 2 more Format: Kindle Edition
Book 1 of 1: Kong on the Planet of the Apes
See all formats and editions
Sorry, there was a problem loading this page. Try again.
Ryan Ferrier (Batman/Teenage Mutant Ninja Turtles II, D4VE) and Carlos Magno (Kong of Skull Island, Planet of the Apes) present the damn dirty crossover event you demanded! ! Following the events of the first Planet of the Apes film (1968), Dr. Zaius and General Ursus lead a small group of soldiers to the Forbidden Zone to destroy any remaining evidence of Taylor’s time among them. To their surprise, they discover...a Kong! Now they must venture to Skull Island with Cornelius and Zira to discover the truth, but they may not survive the deadliest journey of their lives! Collects the complete 6-issue series.
Read more
Previous page
Next page
Kindle e-Readers
Fire Tablets
Free Kindle Reading Apps
Available on these devices 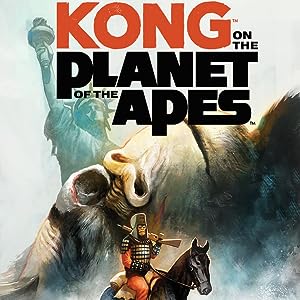 4.1 out of 5 stars
4.1 out of 5
58 global ratings
How are ratings calculated?
To calculate the overall star rating and percentage breakdown by star, we don’t use a simple average. Instead, our system considers things like how recent a review is and if the reviewer bought the item on Amazon. It also analyzes reviews to verify trustworthiness.
Top reviews

Quintis Arrius
2.0 out of 5 stars Snoozing on the Planet of the Apes
Reviewed in the United States on November 5, 2018
Verified Purchase
The artwork in this six issue series graphic novel is stunning. That being said, the story is wearisome. Basically, ***SPOILER***, the whole series is a constant bickering , back and forth, between General Ursus and Dr. Zaius, with Cornelius and Zira picking at each other over "human rights", Kong's rights, bkah, blah, blah. Despite what one of the cover shows, we never see Taylor or Nova. We don't even get who exactly this giant ape is supposed to be, in the scheme of things. Before the apes sail off to Skull Island(?), they find a giant ape body, a female , in the Forbidden Zone - no explanation is ever given. The ending will have you saying "WTF?" . I cannot recommend this, except for the art.
Read more
4 people found this helpful
Helpful
Report abuse

Joshua Brookhouse
4.0 out of 5 stars Fun concept
Reviewed in the United States on June 7, 2020
Verified Purchase
I enjoy these cross overs a great deal. This one felt Planet of the Apes heavy, however. Which isn't bad, but the Kong character never really got the chance to be spectacular. He felt more along for the ride. Still, fun, and good artwork.
Read more
Helpful
Report abuse

Kindle Customer
3.0 out of 5 stars It's aight
Reviewed in the United States on November 28, 2018
Verified Purchase
This book is ok. You only need basic Kong and PotA knowledge to fully understand it. It seems like a match made in heaven on the surface, but the two franchises have little to offer each other.
Read more
2 people found this helpful
Helpful
Report abuse

CKwasHERE!
3.0 out of 5 stars Giraffe's Eye View | Kong on the Planet of the Apes
Reviewed in the United States on January 4, 2019
When you see a title like this, what do you expect? An epic ape-venture on Skull Island? Kong creating havoc on the poor inhabitants of Ape City? Boring babel about faith vs science? If you guessed the last answer, you have problems, but this book is perfect for you. It's a sad shame, a story that sounds like a no-brainer is heightened by amazing artwork, but a slow story full of filler that puts the King of Skull Island in the background. A character with that much recognition should be a contender in a comic with his name in the title.

The story is set between Planet of the Apes and Beneath the Planet of the Apes, which is one thing I have to give this book credit for. It attempts to bridge the gap between these two stories, and I suppose in a way it succeeds. It answers what happened to Cornelius and Zira, Dr. Zeius, and how Milo found the spaceship that brought Taylor to Earth. It does not answer how the corpse of a female Kong washes up on the shore of the Forbidden Zone (aka Manhattan after an atomic war). Zaius and a troop of gorilla warriors find it and assume it's a god haven fallen from the sky, or somewhere out at sea. Recruiting the two caring chimps, who remain under house arrest for assisting Taylor, they set a course for Skull Island. They find it, and barely encounter ANY real threats save for a few raptors. Look at any Kong film, and the threats on the island are enough to make the bravest man run crying home to mommy. More often than not, the dinos and killer vegetables act more like traffic on a long road trip, annoying but tolerable. Jeez, why do the people of this island even need Kong?

Then there's Kong himself, who does eventually show up, only to be studdied by Zaius and Cornelius, who acts uncharacteristically distance towards his wife. Zira, on the other hand, is befriending the human natives, including a young woman who wishes to explore the world outside of Skull Island. In other words, Pocahontas. Remember, this was BEFORE Disney bought Fox. Eventually, an overzealous ape general storms the small civilization, kills off a handful of humans, and captures Kong to bring back home. He comes home with a King, and all I got was a lousy shirt!

They bring Kong home, and when the City Counsel asks Cornelius a question, he turns and stabs Zira in the back. This is way too out of character, for even when the two chimps clash on opinions, they still manage to find a middle ground and talk to each other. Not here, Cornelius just goes with Zaius until monkey-poo finally hits the fans. The gorilla brought back raptors with them to be used as steeds and they get loose, killing a few unlucky citizens. Zaius was able to keep a newspaper article about the original Kong hidden for so long, maybe he had a copy of Jurassic Park too. Seeing Skull Island Pocahontas in trouble (she was brought along and locked up with the other humans), Kong rages himself out of the cage and frees her before rampaging through town. The gorilla decides Kong needs to die, which TOTALLY aligns with that whole 'ape shall not kill ape' philosophy, right?

Either way, they succeed in slaughtering the last Kong (can this gorilla ever come to New York and NOT die?), but he falls into a cavern and is found by the mutants from Beneath the Planet of the Apes. Kong dies as a forgotten footnote of history, the mutants give some stupid monologue, Zaius continues to be an @$$, and Zira and Cornelius kiss and make up just as they hear word from Milo about a new discovery that could get them away from Ape City.

The real problem is, it focuses too heavily on the Planet of the Apes part of the title, and it lacks the balance the first film had. It had political and social commentary, yes. It also had a few fun scenes and interesting imagery. This book fails to balance this or the balance between telling Kong's story as well as the Planet of the Apes. It's an fine comic, I wouldn't mind reading it again, and at the very least it's still better than the Burton reboot.
Read more
3 people found this helpful
Helpful
Report abuse

Bryan Variell
3.0 out of 5 stars More like what if?
Reviewed in the United States on September 2, 2019
What if the story of the original Kong movie took place after the original Planet of the Apes film. And that's this book in a nutshell its not bad but its nothing to write home about.
Read more
Helpful
Report abuse

Omega60Top Contributor: Star Wars
4.0 out of 5 stars Surprisingly well done
Reviewed in the United States on August 4, 2019
I was quite surprised that, as a longtime planet of the apes fan, that i enjoyed this as much as i did. While it didn't fit perfectly within the apes timeline, it fit well enough. It was better than the recent book takes from the forbidden zone.
Read more
Helpful
Report abuse
See all reviews

Shuggy Barr
5.0 out of 5 stars Worth aread
Reviewed in the United Kingdom on March 22, 2021
Verified Purchase
Excellent and nice connection to Escape
Read more
Report abuse