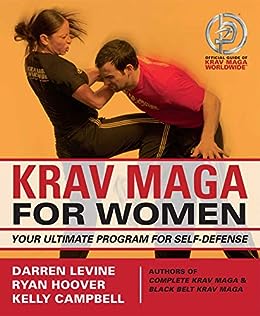 Krav Maga for Women: Your Ultimate Program for Self Defense Kindle Edition

Darren Levine, a 6th-degree black belt, is the U.S. chief instructor of Krav Maga and the owner and operator of Krav Maga Worldwide.
Ryan Hoover is a civilian, law enforcement and military trainer of instructors in eight different countries.  He is the Chief Krav Maga Instructor for Fit to Fight and has black belts in multiple systems.  He has co-authored three books on Krav Maga:  KM for Beginners, Black Belt KM and KM for Women.  Ryan is a certified natural trainer with Monkey Bar Gymnasium and a speed, agility and quickness trainer.
Ryan is also the co-founder of Fit to Fight and it's requisite programs:  SPARology, Hard Ready, Pride and From The Ground Up.  He has been instrumental in developing defensive tactics curricula at the state level and owns two training centers in North Carolina.  He actively trains in boxing, Muay Thai, Brazilian jiu-jitsu and more, traveling the world not only to teach but also to train and continue to grow.
Kelly Campbell is a professional Krav Maga instructor.
--This text refers to an alternate kindle_edition edition.

4.5 out of 5 stars
4.5 out of 5
73 global ratings
How are ratings calculated?
To calculate the overall star rating and percentage breakdown by star, we don’t use a simple average. Instead, our system considers things like how recent a review is and if the reviewer bought the item on Amazon. It also analyzes reviews to verify trustworthiness.
Top reviews

Cleo
2.0 out of 5 stars Fails to teach women essential techniques for womens self defense.
Reviewed in the United States on January 30, 2016
Verified Purchase
Although I have no doubt that the techniques contained within this book could be effective. The book prepares the user for completely the wrong situation, the writers seem to think as most that sexual assualts happen by random kidnappers who jump out of dark ally ways.

The book displays it's misinformation rather up front with lack of ground defence which are essential for most women's self defense situations, and instead fills it with semi flashy bear hugs, and standing techniques, not that those aren't useful, but everything needs to be taken in context.

I would not recommend this book for anyone wishing to learn women's self defense.

I would recommend the other books by this author however for men's self defense.

E
5.0 out of 5 stars A great book on Self Defense for Women
Reviewed in the United States on June 24, 2012
Verified Purchase
Krav Maga is a fighting system designed to be learned in a quick period of time based on instinctive movements. While there are existing Krav Maga books, I hadn't seen any tailored specifically toward women until now. Women are targets as there are those who perceive us as the weaker sex. Men are generally considered stronger than women so if we're attacked, it's thought we just don't stand a chance. Krav Maga will teach you that fighting spirit and aggression you need. You don't have to be in perfect shape to gain benefit from learning Krav. As the book states in its opening page `Krav Maga for Women is about teaching women how to protect themselves against violent attacks that may occur in almost any modern-day scenario'.

The book is separated into several sections with the main section being the techniques themselves.

Why Krav Maga for Women explains why the book was written. What is Krav Maga explains what Krav Maga is and its benefits. In Krav Maga Training Methodology, you fight the way you train. Training in KM is done as realistically as possible, so in time your body learns the techniques to defend oneself from a position of disadvantage or unfamiliar surroundings. When I was first told I could defend against attackers way bigger than me (I'm 5'2), I thought they were nuts. After my body began learning and remembering the techniques, I was proven totally wrong. There are so many ways to be attacked and KM teaches you to defend yourself from every angle (on the ground, standing, from in front, from behind, from the side). KM doesn't limit the technique toolbox you can use to defend yourself.

Use of Force - How Much Force Can I Use to Defend Myself? This section breaks it down to what constitutes self-defense, legal implications and 'Golden Rules of Self Defense'. While the basic rule in KM is there are no rules, one still has to defend themselves with a reasonable amount of force based on the threat. What's presented here one really needs think about before an attack ever happens at all. You have to check with the laws in your state to make sure you know the consequences of using KM as self-defense. Surviving the Encounter explains the mindset and state of awareness you need to be in to survive the attack. There's even a section on Tactical Tips for Woman (When you're out and about, At Social Events, At Home). While to some the lists may look common sense, it's easy to forget these until something happens.

What to Do If You're Raped or Assaulted-excellent info any woman should be aware of before it should ever happen.

I was taking Krav in 2004 when there were no Krav Maga books that I knew of at the time. It wasn't until several years after that Krav Maga became more widely known. This book is made to stand on its own. While KMMW has created several other books before this one, it's not a requirement to have the others to learn what you need right now. By all means, if you want to learn more, feel free to get the other books after you've gone through this book. I've attended Women Only seminars that used what's talked about in this book. I can tell you techniques change (KM is not a stale system) and I even saw a few I originally learned one way and are now presented another. While it's best to train at a Krav Maga center, if you don't have that opportunity, this book is certainly the next best thing. I've been fortunate to have trained with all three authors and I can say without question they're the real deal. Before spending all your time and money getting other resources, check this book out first.

If you want more knowledge, check out these books
Krav Maga: How to Defend Yourself Against Armed Assault
Krav Maga for Beginners: A Step-by-Step Guide to the World's Easiest-to-Learn, Most-Effective Fitness and Fighting Program
Complete Krav Maga: The Ultimate Guide to Over 230 Self-Defense and Combative Techniques
Black Belt Krav Maga: Elite Techniques of the World's Most Powerful Combat System
Read more
10 people found this helpful
Helpful
Report abuse

amazoncustomer
4.0 out of 5 stars Helfpul in a few ways, but still seems like sport fighting
Reviewed in the United States on March 3, 2017
Verified Purchase
This book was helpful in a few ways. It showed how a women may defeat a male attacker, though, a significant number of the techniques still seem to represent some sort of sport fighting rather than fighting for one's life. I thought the book decent, but, some of the photos were grainy.
Read more
2 people found this helpful
Helpful
Report abuse

Green Parrot
5.0 out of 5 stars Don't get bullied
Reviewed in the United States on June 15, 2019
Verified Purchase
Learn to protect yourself, full of helpful pictures
Read more
Helpful
Report abuse

A. Betsy
5.0 out of 5 stars Five Stars
Reviewed in the United States on September 28, 2017
Verified Purchase
Because its never to late to learn.
Read more
One person found this helpful
Helpful
Report abuse

TrustedTheReviews
5.0 out of 5 stars Great book if you're a smaller defender
Reviewed in the United States on February 22, 2016
Verified Purchase
Excellent book. If you're thinking about learning Krav Maga this is a solid learning tool. This volume is definitely slanted towards a smaller person defending against a larger aggressor. It will tell you what you need to know about basic moves and philosophy of the art.
Read more
2 people found this helpful
Helpful
Report abuse

Tech Rock
4.0 out of 5 stars Comprehensive.
Reviewed in the United States on September 10, 2013
Verified Purchase
Really great introduction about its origins. being a disabled vet, I need something like this. No fancy moves, practice. Uses common sense moves that can be learned quickly and retention of knowledge is superor as compared to Martial Arts.
( It is not a martial art, as it states.)
Read more
Helpful
Report abuse
See all reviews

Indogo beauchamp
5.0 out of 5 stars love Krav maga
Reviewed in the United Kingdom on February 26, 2015
Verified Purchase
super fast delivery for starters,blinked and it was here,I mean come on that's top service for ya!
Though,on a serious note.
The book is fantastic.Easy to read,digest and understand.A life saving book.I am practising a little each day,I love it,you have to do this,buy the book,then get stuck in.learn a new skill which could save your life,someone elses or both.

A must have for every kravist.
Read more
One person found this helpful
Report abuse

PHP
5.0 out of 5 stars good photos, and a must for teen girls (and ...
Reviewed in the United Kingdom on September 2, 2014
Verified Purchase
Clear, good photos, and a must for teen girls (and boys) and ladies, for me Karate and most of the others are a waste of time. Krav combines, boxing, judo, tai chi and bits from a variety of other disciplines and arts to provide the most simple and effective defensive techniques. I have started to slowly introduce my teen daughter and son to it. It may not get them out of every situation they may find themselves in but it gives them confidence and some skills which is better than none.
Read more
3 people found this helpful
Report abuse

FinnishGirl
5.0 out of 5 stars Great book if you are interested about Krav Maga
Reviewed in the United Kingdom on January 21, 2014
Verified Purchase
I really like this book and it has good pictures so you can try moves easily at home. This book is really good for women to learn some basic moves and get you interested about Krav Maga. I been thinking years to try Krav Maga and this book really show me what is really gonna be. I am more than interested now.
Read more
4 people found this helpful
Report abuse

linsley
5.0 out of 5 stars Good
Reviewed in the United Kingdom on August 25, 2016
Verified Purchase
Really good - clear explanations. I use this to help me practice after my classes.
Read more
Report abuse

Isi
4.0 out of 5 stars Helpful high-quality book
Reviewed in Germany on June 10, 2012
Verified Purchase
If you haven't yet read any of the other Krav Maga Wordlwide books (Krav Maga for Beginners, Complete Krav Maga, and Black Belt Krav Maga), you may be completely happy with this one. It contains a relatively wide variety of techniques. These are well described and the photographs and step-by-step instructions are very good. They are so good, in fact, that when it comes to describing such techniques in a book, I can't really imagine how it could be done much better.

If, however, you've already read the other books of the series, you may be slightly disappointed as - even though this one definitely focuses on women - there is not much additional information.
Read more
One person found this helpful
Report abuse
See all reviews