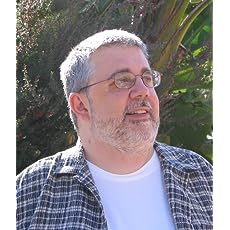 Kurt Busiek is the New York Times bestselling author of ASTRO CITY, MARVELS, ARROWSMITH, SHOCKROCKETS and dozens of other comics, including such well-known titles as SUPERMAN, IRON MAN and AVENGERS, and his own creations, including THUNDERBOLTS, THE WIZARD'S TALE, TOOTH & CLAW, SUPERSTAR and more.

Born in Boston, he now makes his home somewhere in the vast Pacific Northwest, with his wife, two children and a Welsh corgi. 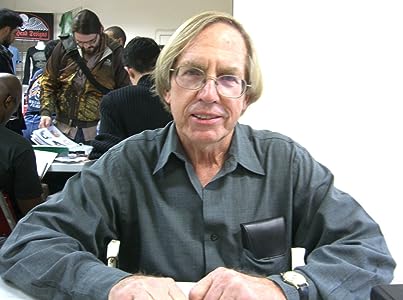 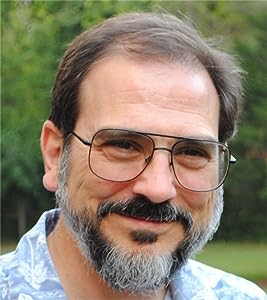 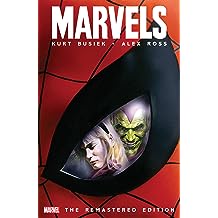 Within the Marvel Universe, heroes soar high in the skies, ready to battle the villains who threaten their world. Yet living in the shadow of these extraordinary
icons are ordinary men and women who view the “MARVELS” with a mixture of fear, disbelief, envy and admiration. Among them is Phil Sheldon, a New York City photojournalist who has dedicated his career to covering the exploits of the Marvels and their effect on humankind. Written by Kurt Busiek and masterfully illustrated by Alex Ross, Marvels presents a richly painted historical overview of the entire Marvel Universe, spanning from the 1939 debut of the Human Torch to the fearsome coming of the world-devouring Galactus — and culminating in the shocking death of Gwen Stacy, Spider-Man’s first love.
Read more
Other Formats: Hardcover , Paperback 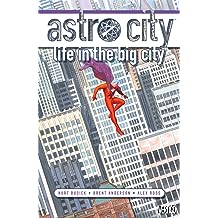 Astro City (1995-1996) Vol. 1: Life in the Big City: New Edition Sep 13, 2011
by KURT BUSIEK , Brent Anderson , Alex Ross
( 29 )
$5.99
The original ASTRO CITY collection is offered in a new edition with new cover art by Alex Ross! Welcome to Astro City, a shining city on a hill where super heroes patrol the skies. Each chapter in this collection is a standalone story, highlighting different aspects or characters in the Astro City world. The city's leading super hero tries to be everywhere at once, and berates himself for every wasted second as he longs for just a moment of his own. A smalltime hood learns a hero's secret identity, and tries to figure out how to profit from the knowledge. A beat reporter gets some advice from his editor on his first day on the job. A young woman tries to balance the demands of her family with her own hopes and desires. Despite the fantastic settings, the characters in these slice-of-life stories feel like real people, and that gives the stories real power.
Read more
Other Formats: Hardcover , Paperback 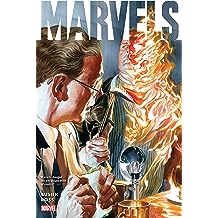 The timeless classic that changed the way we look at Marvel super heroes celebrates its 25th birthday in style! Kurt Busiek and Alex Ross’ original tour through the early history of the Marvels — as captured through the lens of photojournalist Phil Sheldon — is collected in full! Then, Busiek and Ross reunite for an amazing new epilogue featuring the all-new, all-different X-Men in deadly battle against the Sentinels — with the now-retired Phil and his daughters caught in the middle! Plus: A behind-the-scenes look at the creation of the epilogue; scripts, sketches and scores of other bonus features and a stunning gallery of variant covers paying tribute to the 25th anniversary of MARVELS!
Read more
Other Formats: Hardcover 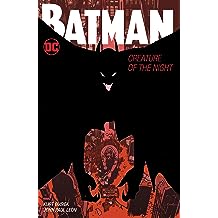 Batman: Creature of the Night (2017-) Mar 31, 2020
by Kurt Busiek , John Paul Leon
( 8 )
$15.76
Bruce Wainwright, a comic book-reading kid obssessed with the Caped Crusader, loses his parents in a violent crime...and in the real world, no superheroes exist to save the day.

BATMAN: CREATURE OF THE NIGHT, written by Kurt Busiek (ASTRO CITY) and drawn by John Paul Leon (MOTHER PANIC) is a stand-alone story set outside of regular continuity in 1968 Boston, MA. The victim of the brutal murder of his family, young Bruce sees grief and rage build inside himself...until something strange starts taking wing in the Gotham night! Something similar to the comics he's been reading his whole life. As life begins to imitate art, will Bruce Wainwright be able to live up to his fictional namesake?

A deliberatel spiritual companion to the beloved SUPERMAN: SECRET IDENTITY, BATMAN: CREATURE OF THE NIGHT puts a new spin you've never seen before on the legend of Batman--and the dark emotions that drive him! 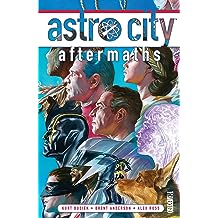 Astro City (2013-2018) Vol. 17: Aftermaths May 14, 2019
by Kurt Busiek , Brent Anderson , Mike Norton
( 21 )
$11.70
The final run of ASTRO CITY comics (for now) includes the tale of G-Dog. He’s half man, half dog-—but who’s running the show? The answers will change a life, reveal another hero’s deepest secrets, and possibly, just possibly, save the world. Then, it’s the story of Resistor, who’s making headlines all across the nation, and a reporter determined to learn the truth and find her missing father. Plus, discover the truth behind the citizens of Astro City whose lives have been upended by superheroes like the Samaritan and the Hanged Man. For those damaged by life in Astro City, hope and wonder are elusive things…Collects ASTRO CITY #47-52.
Read more
Other Formats: Hardcover 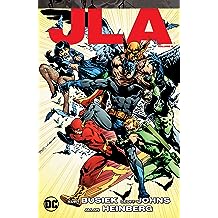 In this follow-up to the best-selling IDENTITY CRISIS and prelude to the epic INFINITE CRISIS, Kurt Busiek (ASTRO CITY, JLA/AVENGERS), Geoff Johns (JUSTICE LEAGUE), Allan Heinberg (WONDER WOMAN) and others tell the story of the final days of the JLA!

The Earth has survived catastrophe after catastrophe, from alien invasions to the sun dying, but it has never reached a turning point quite like this, and neither has the JLA. While no one knows the Infinite Crisis that is coming, the members of the JLA can feel it, and it’s starting to wear on their already-frayed nerves.

The beginning of the end starts with an incursion from the antimatter universe by the Crime Syndicate of America, the JLA’s evil dimensional counterparts. As chaos reigns across Earth, the two super-teams must band together before the might of the Weaponers of Qward.

Closer to home, Batman has learned the truth behind the Justice League’s darkest secret: that they used magic to alter the minds of the Secret Society of Super-Villains. With the Society returned, seeking vengeance, the League is forced to question the fine line between hero and vigilante. 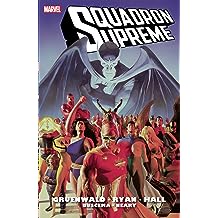 On an Earth much like our own, the world's greatest superhuman champions are confronted by a society in ruins. Faced with the possibility of a new dark age for mankind, they choose the only course available to them -and take control of the world's governments themselves! Now they have one year in which to completely restructure human society. Can their plan succeed? Will a renegade member bring about their downfall? And what will happen when the Earth's mightiest heroes find themselves becoming instead its all-powerful, totalitarian overlords?
Read more
Other Formats: Kindle & comiXology , Hardcover , Paperback , Comic Book 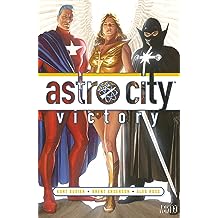 Astro City (2013-2018) Vol. 10: Victory Sep 23, 2014
by Kurt Busiek , Brent Anderson
( 17 )
$5.99
A major new epic begins featuring Winged Victory, Samaritan, and the Confessor, three of Astro City's most popular heroes. When criminal charges are brought against Winged Victory, the Confessor must investigate and it leads to open combat with Samaritan! Can Astro City's three greatest heroes find a way to work together against this mystery threat? Plus, Winged Victory's origin is revealed at last! 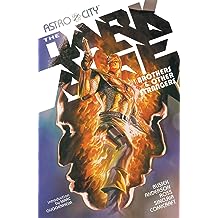 Astro City (2005-2009) Vol. 6: The Dark Age Book One: Brothers and Other Strangers (Astro City: The Dark Age (2005-2009)) Apr 14, 2015
by Kurt Busiek , Bret Anderson , Brent Anderson
( 3 )
$9.36
Life in a city full of superheroes, costumed criminals, sorcerers, demons, mobsters and madmen is unpredictable at the best of times. And for Charles and Royal Williams, two brothers trying to cope with a tragedy that ripped their family apart long ago, and threatens to tear them apart today, the times are anything but good.
Acclaimed master storytellers Kurt Busiek and Brent Anderson invite you to walk the streets and alleyways of Astro City in one of its most turbulent periods. Meet the dangerous Madame Majestrix, the sultry Black Velvet, the psychotic Jitterjack and more, as you find out why the people of Astro City call this "The Dark Age." 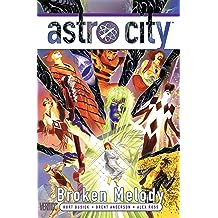 Music hath charms. The song of the Broken Man, Astro City’s most mysterious figure, is revealed at last. From the Old West to the Roaring Twenties, the Swinging Sixties and beyond, music has played a hidden role in the city’s heroic history. But is that music now...broken?

Acclaimed creators Kurt Busiek, Brent Anderson and Alex Ross tell a story of life, loss...and the power of music. Also featuring the story of the spacefaring Astro-Naut and how he gave the city its name, the origin of the ageless hero known as the Gentleman, and more. It all begins with an enigmatic drifter named Silverstring, and the strange power of a music... 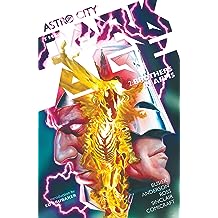 Astro City (2005-2009) Vol. 7: The Dark Age Book Two: Brothers in Arms (Astro City: The Dark Age (2005-2009)) Oct 26, 2010
by Kurt Busiek , Brent Anderson , Alex Ross
( 1 )
$9.36
In the concluding volume of THE DARK AGE, collecting BOOK 3 #1-4 and BOOK 4 #1-4, two brothers, one good and one evil, must deal with family secrets and social upheaval, involving heroes from Jack-In-the-Box to the Blue Knight and the unsettling events leading to the final fate of the mysterious Silver Agent. Find out why this era was so troubled through the eyes of two men who survived the its depths!
Read more
Other Formats: Kindle & comiXology , Comic Book 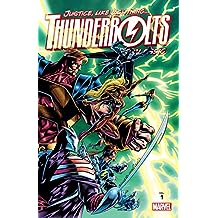 Justice, like lightning! When the world's heroes disappear, a new team rises to take their place! Meet the Thunderbolts: Citizen V! Techno! MACH-1! Songbird! Meteorite! Atlas! But what dark secret are these heroes hiding? Read the stories that changed the way the world looks at redemption!
Read more
Other Formats: Paperback