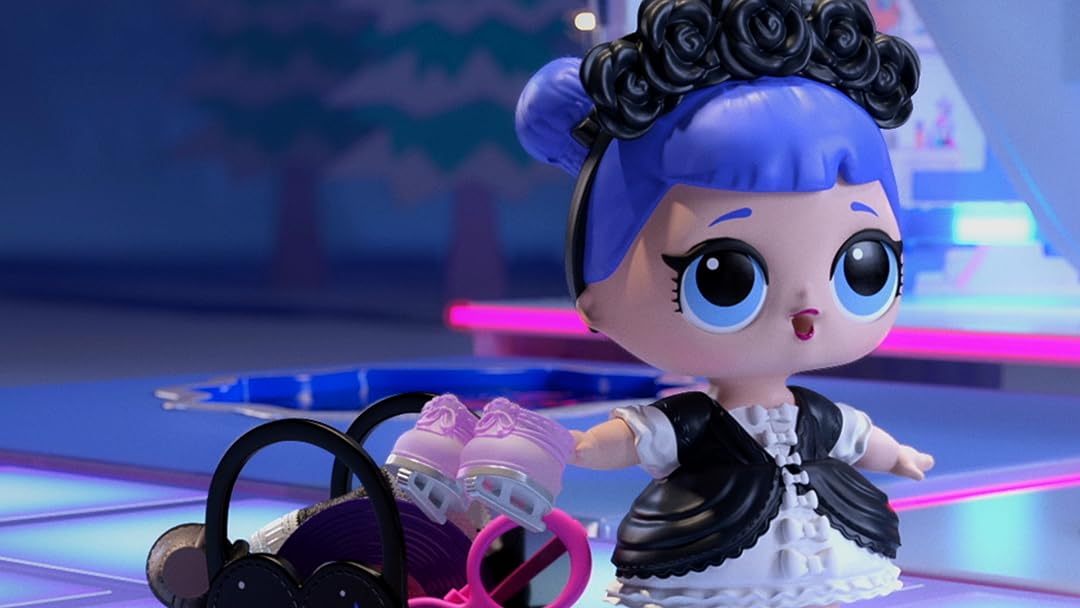 Season 101
(115)5.12019X-RayALL
Tahani and Mykal-Michelle are stuck inside their house during a snowstorm with no lights or internet! So, Tahani tells a story that takes us into the world of LOL Surprise, where everyone is preparing for the coolest party ever: The Winter Disco! When Midnight is the only B.B. not invited to perform at The Chalet, she embarks on a journey to sabotage the party, and change the Winter Disco forever!

caliBOOKSReviewed in the United States on November 12, 2019
1.0 out of 5 starsInappropriate for young girls, confused on the Y rating?
Not for young kids like rated. My 5yr old was watching this and I was appalled. She loves the little dolls so was excited to see the show on here. This show teaches little girls to act like adults and encourages them to not respect authority , "don't care what anyone thinks"... "do you" as quoted in the show. Definitely should not be rated Y. The little girl in there, that looks like she's about my daughters age, has tons of makeup on and fake lashes. She has tons of attitude and makes being disrespectful look "cool." Lots of eye rolling and inappropriate dress & behavior for young girls. Let's keep our little kids LITTLE, why the push to grow up so fast. This is so sad. This will create a generation of troubled young women. Very "me centered" not good. Stay far away.
129 people found this helpful
Report abuse

K. T. BakerReviewed in the United States on November 1, 2019
1.0 out of 5 starsThis is not a movie for little girls
This movie is a sham, it leads little girls to believe that they can act like little whores and be considered normal. I am ashamed of whoever thought that this was entertainment for children. It belongs in the garbage.
93 people found this helpful
Report abuse

LovesPrimeReviewed in the United States on November 3, 2019
1.0 out of 5 starsAwesome. Redlight district babies
Because the world needed babies dressed in fishnet and cheetah prints. Poor kids. So many ways to destroy them, so little time.
74 people found this helpful
Report abuse

LPReviewed in the United States on November 3, 2019
4.0 out of 5 starsI'm impressed.
I just want to say before I jump into this whole review. I grew up in the late 80's / early 90's so I've seen some movies/tv shows that were made as whole cartoons for product placement, I might not be a professional but I've got some content to compare this to that won't be mentioned by name.

I have to honestly say I was concerned at first when I found out there was an LOL 'movie' coming out. Usually something that could be a full blown tv show about toys now a days could go terrible in attempts to make kids / parents want to buy the toys. This didn't seem that bad, there was a ton of product placement and nods to various products MGA produces, which is fine it is a toy line movie after all.

As an artist I have mixed feelings about CGI and often find it's a cheap cop out to other alternatives, and I've seen the lol mini youtube stop animation 'commercials' so to speak; I was worried that this was going to be the same type of thing. However I was pleasantly surprised with the amount of CGI and animation in this. It's actually a higher quality CGI than I expected, the only part that I was bothered by was the snow falling out of the door and I wish that could have been handled a little differently but over all it wasn't terrible.

The dolls' CGI animation was great I loved the little attention to details like eyebrows moving or eyes shifting like they would if they were an actual animated character and not just a doll. Even the arms and legs while intentionally having stiff movements felt very natural for the size of the doll.

I noticed several people mention the word bubbles and how comic strip it felt. However, I'm use to seeing that in the other LOL surprise productions such as the commercials so I wasn't terribly unprepared for that though I do feel like it maybe fast for younger viewers or slower readers. I'm also use to reading sub-titles because I watch a lot of anime and Japanese animation and I understand not all viewers can read subtitles and things as fast as others. So this maybe something LOL looks at working with to extend the time the bubbles are on the screen or something.

The story itself I felt actually helped the movie - - I feel odd saying movie because it's more the length of a normal show . . . anyways. I feel like the story helped this not feel like it wasn't as big of a product add than it actually was. I think it also helps take away from the feel of 'omg I need this toy'. It's not going to stop all of it but it'll cut down on it some. I think I counted at least 5 different types of products mentioned in this (not including variations of aforementioned product). So if kids don't pick up on this as being a toy ad and wanting the products mentioned I'll give even bigger props to LOL and MGA for pulling this off.

That all said I think Tahani and Mykal-Michelle both were great in this. They're both very talented and I felt Tahani on a level when it came to responding to Mykal-Michelle's dramatics about not having internet. Props to the girls and I hope they keep it up; both of them are very charming actresses.

This is meReviewed in the United States on November 2, 2019
5.0 out of 5 starsChalet all day!❄️👏
When these toys first came out I despised them and was not about to like them but my young daughter of course fell in love with them. Hey, I was one of the kids in the 90s begging for Furby and pogs, so I get it... and I have to admit I'm a bit of an L.O.L fan now, too 😏

Fast forward to right now, I'm watching this with her for the 2nd time (don't judge) since it came out yesterday😮

The two girls that are in it, and narrate the story, are cute- my daughter remembers them from other toy videos and we watch Mixed-ish so she was excited about seeing Mykal-Michelle from that, too.

The doll characters don't talk, they just have text bubbles pop up to show what they're saying, so that's not ideal for everyone. At the same time, I like that it's a little different.

Nothing in it that I personally thought was a problem, though, every family to different on what works for them and that's cool. I will say that as far as they're dressed is concerned, I don't see anything wrong with that part either. The older girl wears a bit of crop top in most scenes so heads up to those who haven't watched it aren't ok with their kiddos watching.

They wear makeup and different fun prints and styles. Given it's a show and that L.O.L has always had fun fashion and makeup. I can think of many other kids shows (and toys) for decades that they dressed up in and wore make-up. Again, everyone has different standards and views, though. My kiddo isn't allowed to wear makeup or crop tops but I don't mind her watching this and having the dolls. If they had the girls saying inappropriate stuff and all then it's something we wouldn't watch. I also don't let mine watch YouTube videos, which is what got her into watching the unboxing videos on Amazon 😆

It's fun, silly and glamorous! And brilliant considering they have exclusive toys just in time for the holidays 😆 We really like it and the winter theme!
46 people found this helpful
Report abuse

PlatinumReviewed in the United States on November 1, 2019
3.0 out of 5 starsIt was okay
My 4 year old daughter loves LOL dolls. Unfortunately, she couldn't read any of the pop up bubbles so she didn't get the full story line. The little girl's voice and acting was so annoying. Definitely a show for older kids.
40 people found this helpful
Report abuse

Allison KutaReviewed in the United States on November 3, 2019
4.0 out of 5 starsUnspoken text dialog :(
My four year old was SO excited to watch this movie. She enjoys watching similar fan videos on Youtube, though she doesn't own any L.O.L. surprises. The stop-motion-type doll scenes were cool, and the two human actresses were very animated and entertaining.
We were surprised and, honestly, disappointed to find that the segments with the L.O.L. toys are executed in pop-up "word bubbles" like a comic strip and not spoken aloud. I went to check the rating of the movie -- "Programming rated TV-Y in the United States TV Parental Guidelines, signifies content that is suitable for all children ages 0-6" -- though I'm not sure most of the under 6 crowd could keep up with the quick text. I took away ONE star for this reason. Thankfully, my teenager watched it with her little sisters and read the speech bubbles all aloud, so the movie was enjoyed and understood by all. A shame they didn't have voice actors read those little comments.
I was worried it might be a full-length-toy-commercial, but it had a cute story (and my kids didn't beg for toys following, thankfully!) My teen was amused, my three year old was intrigued, and even my naysayer 8yo son ended up watching, too.
25 people found this helpful
Report abuse

NsabReviewed in the United States on December 17, 2019
1.0 out of 5 starsGood animation but I don’t want my daughter acting this way
My daughter loves lol dolls (well she loves opening them) Dispute their skanky outfits I don’t mind the dolls but I really really dislike this movie. I agree with lots of the moms who have left reviews. I don’t want my daughter acting like this or thinking its normal to be cellphone obsessed, wearing makeup and be so rude. These girls are annoying, shallow and selfish. My daughter is almost six and as most girls her age she copies everything she sees. I totally should’ve previewed this before letting her watch. I think the animation was fun to watch but the live girls completely ruin it.
15 people found this helpful
Report abuse
See all reviews
Back to top
Get to Know Us
Make Money with Us
Amazon Payment Products
Let Us Help You
EnglishChoose a language for shopping. United StatesChoose a country/region for shopping.
© 1996-2021, Amazon.com, Inc. or its affiliates