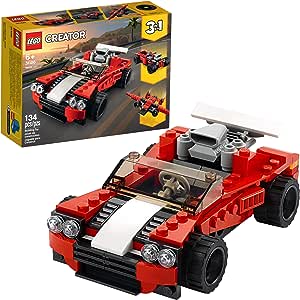 by LEGO
4.8 out of 5 stars 71 ratings
Available from these sellers.

3in1 high-speed action and thrills

Kids can enjoy 3 build-and-play options in this LEGO Creator 3in1 set. Choose a sports car, hot rod or old-style plane.

Kids can choose to build 1 of the 3 models to extend their adventures from land into the air. Then rebuild for more fun!

Fun to build and hours of play

This imaginative 3in1 set inspires open-ended opportunities for kids to build, rebuild, reimagine and play.

Kids can enjoy a fun building experience as they create a speedy sports car, detailed hot rod or old-style plane.

Drive kids’ love of vehicles and creativity with the exciting LEGO Creator 3-in-1 Sports Car toy set. Kids will love racing around with this red-and-black sports car, featuring a center motor, intake pipe and a spoiler on the back. They get 3 different build-and-play experiences with this LEGO Creator 3-in-1 set. They can build a sports car, rebuild it into a hot rod with motor and intake pipe, make an old-time plane, or create something completely new. This awesome building toy encourages imaginative play and makes a great treat or reward. Both the sports car and hot rod have room for a minifigure in the cab. LEGO Creator 3-in-1 sets offer kids fun models that are detailed and realistic and encourage imaginative play. The models create endless building and play opportunities while sparking creativity in children of all ages. These small and inspirational sets also make great any-occasion gifts.

4.8 out of 5 stars
4.8 out of 5
71 customer ratings
How does Amazon calculate star ratings?
Amazon calculates a product’s star ratings based on a machine learned model instead of a raw data average. The model takes into account factors including the age of a rating, whether the ratings are from verified purchasers, and factors that establish reviewer trustworthiness.

Daniel
5.0 out of 5 stars A well thought-out design (as well as a great teaching tool for young children)
Reviewed in the United States on March 3, 2020
Verified Purchase
We've stockpiled a bunch of Lego "Creator 3-in-1" sets for our young child. Even though the sets are marked for 6+ or 7+ year olds, we introduced one of the simpler ones -- the 71-piece Blue Express train -- to our 3-year-old. (He's not a toy swallower, but we were watching carefully nonetheless.)

For many reasons, we can heartily recommend these.

With the help of both us parents, the three of us studied the instructions, identified the pieces, and patiently assembled everything. For an older child, this should be a no-brainer for them to construct on their own. The instructions are (for the most part) quite well composed.

Lego's "3-in-1" concept is an ingenious one: The same set of pieces generates three distinct designs. Here are a few of our observations and buying tips -- these apply across the board to most of the sets in the Creator series:

1. You may want to purchase multiples of some of the sets, especially if it's a set that's less than ten dollars each. This won't matter if your child (or you!) loves to disassemble and reassemble repeatedly. But if the child wants to continue playing with one of the 3 designs (especially for the trains, cars & spacecrafts), then extra sets will allow you folks to build more than one of those three designs simultaneously. Also, keep in mind that some of the sets (like the trains) snap together if you own more than one copy.

2. Keep in mind that Lego LOVES to "retire" designs quite quickly. Those that are very inexpensive initially will eventually become available only on the secondary market at higher prices. Yes I know ... by saying that I'm (literally) buying into their "spend more now" strategy, but it's worth being aware how Lego operates so that your purchase decisions are well informed.

3. The newest designs are often the cheapest (at first), and the 3-in-1 sets are orders of magnitude less expensive than Lego's branded, large-scale projects. Most of the online and big-box stores (not including Lego's) will price these at the exact same amount, but it's still worth shopping around. And we found that these sets can be really discounted on Black Friday / Cyber Monday. Lego itself does have special sales, so it's worth being on their e-mail list.

4. Do your Amazon search using "Lego Creator" and you'll see all the current offerings at once. The sets vary from simple (70 pieces) to more complex (many hundreds of pieces). Our favorites are the trains and planes, but you and your kids may find some of the other designs really imaginative. The Space Shuttle one is way cool.

5. The webpage for each product shows the box exteriors, which have excellent images of the three variations. That's often the main criteria -- in addition to price -- that leads us to select one rather than another.

6. I was a Lego purist as a child ... someone who only built projects from generic pieces. So, when the selection of "branded" designs from Lego exploded in recent years (think Star Wars or Disney), I was a bit repulsed by all of these custom projects. I'm still not big on big-name sets, but the Creator line changed my way of thinking about using Lego.

7. For goodness sake, if you buy a bunch of sets on Black Friday and intend to space out the gift-giving, find a safe hiding space! Our boy spotted half-a-dozen in our closet when he turned three, and the negotiations at that point were fierce (and he's a reasonable guy).

8. If you ever experience Kinder Egg toys during their heyday of creativity, these Lego sets will remind you of that same design concept. Basically, as the last pieces fit into place, the reaction is always, "Wow! That works!"

tech_guy
5.0 out of 5 stars Perfect for a 7 year old
Reviewed in the United States on February 24, 2020
Verified Purchase
I have a little boy who loves lego set, from the moment he opens one he quickly grabs the instructions and starts to build, it does not matter how small the pieces are, or that he does not speaks english at all, the instructions are so easy to understand that he can do it by himself.
I'm trying to push him to build his own inventions and usually after building the set he starts to play with them as a toy and stop building, so these 3-1 sets are perfect for both of us, he loves to build and rebuild them and I get to see him using his imagination to mix the set as he wants, the fun never ends.
Read more
One person found this helpful
Helpful
Comment Report abuse

Nicole Beardsley
5.0 out of 5 stars Alright
Reviewed in the United States on March 3, 2020
Verified Purchase
My son loves anything legeo they were teaching me how to build them lol
Read more
One person found this helpful
Helpful
Comment Report abuse

Sophie's mom
5.0 out of 5 stars Will buy again
Reviewed in the United States on February 27, 2020
Verified Purchase
Bought as a gift for overseas trips but covid-19 hit. Have too return. Will buy again in the future after cv-19 has cured.
Read more
Helpful
Comment Report abuse

Mickispc
5.0 out of 5 stars Perfect for the little builder!!
Reviewed in the United States on February 1, 2020
Verified Purchase
Great grandson loved this. Couldn’t wait to get it out of the box and have his dad help him make the car. You can never go wrong with LEGO!!
Read more
Helpful
Comment Report abuse

John kunde
5.0 out of 5 stars Good
Reviewed in the United States on March 6, 2020
Verified Purchase
Little brother loves it, great to get for a beginner LEGO builders
Read more
Helpful
Comment Report abuse

Canadian
4.0 out of 5 stars The wheels are not the best quality
Reviewed in Canada on February 5, 2020
Verified Purchase
This was the second 3 in 1 lego set I bought for my 4 year old. He really loves them. This one had a bit of an issue with wheels as they vibrate and the car turns and stops when you play with it. I am not sure if this is an issue with this particular set or this 3 in 1 model. It was still fun to assemble
Read more
Helpful
Sending feedback...
Thank you for your feedback.
Sorry, we failed to record your vote. Please try again
Report abuse