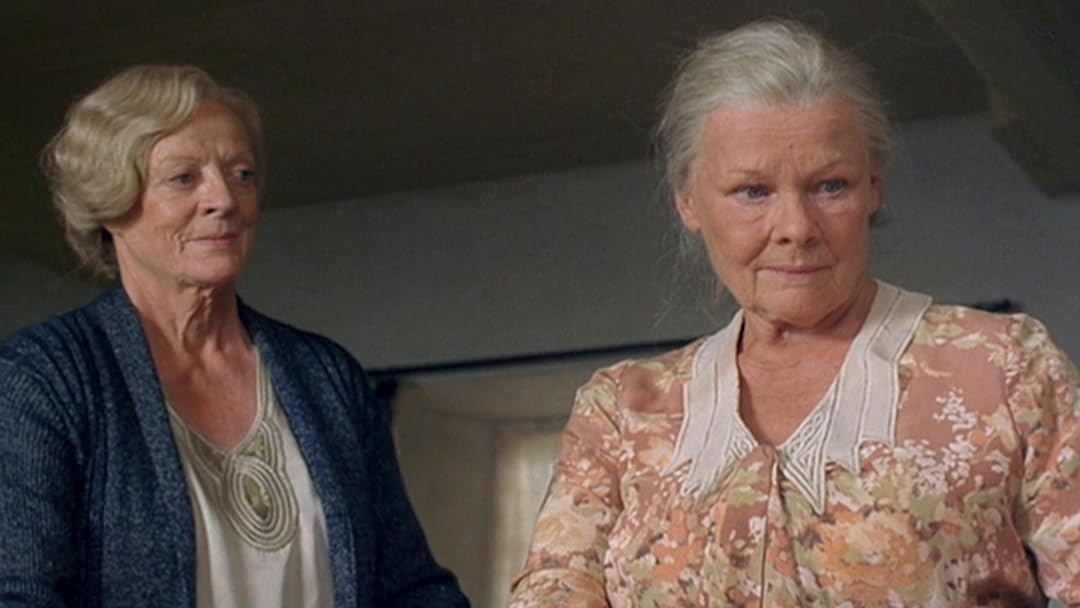 (1,894)
7.01 h 43 min2004X-RayPG-13
Aging spinster sisters Ursula (Judi Dench) and Janet (Maggie Smith) discover a young man (Daniel Brühl) near death on the beach by their home in a small Cornish fishing village. Taking him in, they discover that he is Andrea, a violinist from Krakow, Poland, who had been swept off an ocean liner on which he was sailing to a fresh start in America.

YeatsReviewed in the United States on June 24, 2017
5.0 out of 5 stars
A Small, Lovely Film of Humanity.
Verified purchase
If you do nothing else for yourself tonight, take the joy and ease of basking in the timeless perfection that is invariably Judi Dench and Maggie Smith! A tenderly shot film of sweetness, humour, love and loss -- punctuated with glorious music and vistas, Ladies in Lavender celebrates humanity in a fairly simple storyline -- you've probably read it. Along with Daniel Bruhl as the intoxicant, this English coastal village of hard work and generous friendships suddenly bursts with youth and new-found energies. On a subtle level, Dench and Smith look back, weighing their lives for better or worse. Their new beloved Andrea, who has washed ashore and been cared for by the ladies, leaves an indelibly enchanting memory on all of them, one he too will hold gently for a lifetime.
204 people found this helpful

ArtistDame1Reviewed in the United States on June 24, 2017
5.0 out of 5 stars
Perfect lazy couch afternoon watch ... and if it's raining ... even better!
Verified purchase
When I saw "Judi Dench and Maggie Smith" as the stars, I was more than willing to give it a look. Perfect movie when you are not looking for a fast pace. The acting all the way around is excellent. The cinematography made me feel like I was there with them in every scene, not just a spectator. Other reviewers have commented it's an "unusual" or even "unsettling" love story. Well, only if you want to throw sex into it. Interesting how people find an older woman's attraction to a young man uncomfortable but not the old doctor (David Warner) pursuing the young woman, Olga. Pretty simple for me. We age chronologically but for a lot of us, our brains stay very sharp and disbelieving of that number. It made complete sense to me a woman longing for a youthful love lost/never found, would have wishful feelings. But enough of analyzing something that is not true but a story! Want to sit back and enjoy a lazy pace movie with consummate actors and the indescribable violin playing of Joshua Bell? Highly recommend.
161 people found this helpful

Rosemary DziakReviewed in the United States on June 22, 2017
5.0 out of 5 stars
Beautiful film
Verified purchase
I really enjoyed this film. The setting was beautiful and the acting excellent. As an older woman who still feels very young, I can appreciate the feelings of the women and the excitement and joy that their unexpected visitor brought them. It was a nice escape from our current times to see how well mannered people can be even when they are experiencing some unsettling times. This film may move slowly for some audiences but I found it relaxing to view and certainly the music was an unexpected bonus.
77 people found this helpful

Lance&Anne RobinsonReviewed in the United States on June 21, 2017
4.0 out of 5 stars
Psychobabble by Anne
Verified purchase
This movie is not for everyone. Here's why I liked it: I already love the work of many of the actors involved. This was an odd project (it feels vintage and not due to costuming) and I get the reviewers grossed out by the "falling in love bit", but I thought it very well done. It's intended to be mildly unsettling/disturbing in the way some scenes were shot. Some of Judy's staring was odd and a bit discomfiting until you realized how inexperienced she really was. After a bit I realized she probably wasn't even aware of how that came across. That said, men have fallen for far younger women since the dawn of time.
This is a story told through subtleties and most of the actors reactions/behaviors are flawlessly portrayed.
SPOILERS
Judi Dench was introduced as a childlike character, reliant on and submissive to her sister in a giddy, open manner which suggested she'd spent her years unspoiled. I believe we were looking at a naïve, sweet old virgin. She clearly didn't understand her feelings initially and lacked the sophistication to hide her rapidly growing obsession. Several of her expressions (her sparkly, smiling skip and her head lowered, eyes raised gaze through the window) showed further how much more she remained a freespirited girl than the old lady on the outside. Her sometimes petulant reactions and her jealousy all point to her emotional inexperience.
Maggie Smith was the responsible one, she sheltered her sister and protected her innocence as she could, supporting her sister's joys tempered externally with reality. She'd been married and lost her husband in the war - a war in which she'd served as a nurse and learned to speak some German.
Maggie's better ability to communicate with Andrea caused her sister additional angst. She was excellent in portraying her growing, reserved fondness for the young foreigner, and when she began to show a maternal jealousy nearly as strong as her sister's, it was charming.
When Judi cries, speaking to her sister about her sister's husband, we see a deeper side; she senses the magnitude of what she's missed out on and though she realizes she can't have it with Andrea now, she can't stifle her feelings for him and true to character, doesn't try to, she just keeps the romantic bits a bit more hidden.
I wasn't impressed by the way Andrea left as he did. After all they'd done for him it seemed ungrateful (he could have taken another ship later) but in a way that was kinder, as it allowed Judi to let her romantic notions for him go (when she let his hair clipping fall away into the wind).
So yes, it's subtle and may feel plodding for some, but I really enjoyed the humanity of the realistic reactions, especially of the two leading ladies.

Just As I AmReviewed in the United States on July 4, 2018
5.0 out of 5 stars
Such a quality film. Judi Dench was fabulous.
Verified purchase
Such a quality film. Beautiful English oceanside/countryside cinematography. Judi Dench and Maggie Smith we know are seasoned actresses of highest caliber but Judi Dench was fabulous in this in her range of emotions and expressions (especially in that her character had been raised under normal British restraint, over the 80-something years prior to WW2: this film's time frame). The young man who played the one who washed up to shore below the elderly-sister's home was also perfectly cast, charming, delightful and engaging to watch.
The story is slow-moving but enjoyable and sweetly touching in a very down-to-earth sort of way. If you're over 60, you may particularly relate, as one of the women characters and another male character in this were wistfully melancholy at their age, now being past their romantic prime yet romantically stirred by two of the younger characters. The lovely Natascha McElhone was well cast in this also and added much to the story and ambience.
Before I saw Joshua Bell's name at the end credits, I know that must be his violin mastery we were hearing. The end scene and ending credits of his performances were pure bliss to the ears and felt in the heart.
I waited until I was in a tender sort mood (of artistic ambience) to watch this film again after all these years, and that's the way to watch it for full effect. This evening, it was very soothing for the soul.
30 people found this helpful

J. SmithReviewed in the United States on August 29, 2018
1.0 out of 5 stars
I would give this 0 stars if I could.
Verified purchase
I watched this through my Prime membership, so I did not pay anything above the membership fee for it. I thought, hey Maggie Smith and Judi Dench, how bad can it be? Oh, it is horrific. An unbelievable waste of two incredible actresses. Besides being slow moving, it is quite uncomfortable with Judi Dench's character (probably in her 70's) being infatuated with a boy of maybe 20, the local doctor is infatuated with a young woman who he is old enough to be her father if not her grandfather. I found the whole movie creepy, unsettling and slightly sick.
19 people found this helpful

old_broadReviewed in the United States on February 21, 2016
5.0 out of 5 stars
Ladies in Love....
Verified purchase
Ladies in Lavender was a fine drama. I liked Enchanted April and found Ladies in Lavender to be on par with that. The plot was predictable, but warm and inviting. The ending was predictable also, but there was a lesson in life to be learned and we all learn them differently. The two women, one felt motherly, the other felt passionate, and heartbreak was the only possible ending. And life goes on....
49 people found this helpful

High Mileage HondaReviewed in the United States on June 8, 2019
1.0 out of 5 stars
Painful to watch from start to finish
Verified purchase
My husband and I couldn't get over how silly this movie was. The story line is basically a young man washes ashore and two elderly ladies take care of him and one falls in love with him. That is just sick. A 70+ year old woman falling in love with a 20 something year old is just plain weird. It is crazy when this happens with an elderly rich man and a young woman, and just as "eww gross" when it's the other way around. Every time I would see the older lady Ursula acting all girlish and giddy about Andrea (the young man) I would think "how inappropriate." I can't get over all the great reviews. Totally boring story and my husband agreed. They needed to make this movie where the elderly ladies saw Andrea like a son and maybe then this movie would have been worth watching. (BTW, the part where Ursula is dreaming about rolling around with him in the grass romantically is so gross).
10 people found this helpful
See all reviews
Back to top
Get to Know Us
Make Money with Us
Amazon Payment Products
Let Us Help You
EnglishChoose a language for shopping. United StatesChoose a country/region for shopping.
© 1996-2022, Amazon.com, Inc. or its affiliates