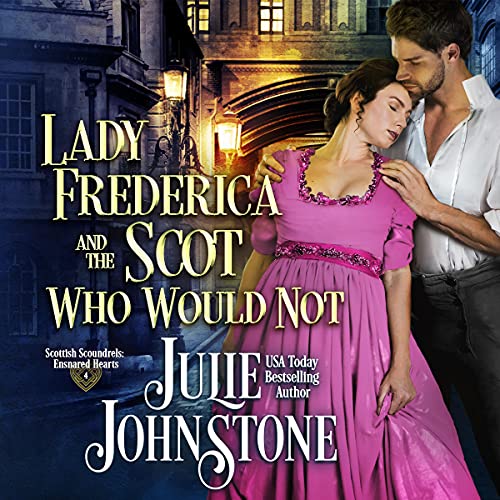 Lady Frederica and the Scot Who Would Not: Scottish Scoundrels: Ensnared Hearts, Book 4

When the guarded King of the Underworld collides with a maddeningly reckless lady, the road to ruination becomes impossible not to take.

Lady Frederica Darlington isn’t prim, obedient, or appropriately dispassionate as a proper lady of the aristocracy should be. Nor is she interested in securing a husband, whether rake, rogue, duke, or lord. Freddy wants to live as she pleases in a place she feels she belongs, and for a unconventional lady, the bohemian world of Covent Garden seems the perfect spot. She has a plan to achieve her goal, but when one of her secret missions goes awry and the King of the Underworld rescues her, danger never looked so enticing. And the future she was certain of now feels utterly confusing.

Born and bred on the cutthroat streets of London, Gabriel Beckford has known his share of struggle and loss. He even obtained a few enemies, one of whom is waiting to destroy any lady Gabe falls in love with, so Gabe lives by one simple, necessary rule: Never get close. It’s a dictate that’s been easy to abide - until the day Frederica sweeps into his life like a storm. Her passionate nature and impossible impetuousness tempts him beyond reason, and when she declares to make the territory he rules her home, he’ll do everything in his power to stop her and keep her out of his life, head, and heart.

But when a threat to Frederica brings Gabe to her side once more, keeping her at a distance becomes impossible. As Gabe’s enemy closes in, Frederica and Gabe must learn how to trust themselves - and each other - and either submit to the love they thought they never wanted, or risk losing the very thing that could save them both.

poprock explodey head
1.0 out of 5 stars This story suffers from telling, not showing.
Reviewed in the United States on June 16, 2021
Verified Purchase
I was disappointed. This book seems to have been written in a hurry. Characters are not well developed, especially Freddy's brother, Huntley. I get that the author is probably saving him for his own story, but I would have liked a little on his motivation for allowing his pregnant sister as well as the woman he is supposed to be courting, hatch and carry out a scheme to try to capture a dangerous man. There could have been at least a scene with the three of them arguing tactics or something. The reader is just told they are planning.
I would have liked more development of Blythe as well. I know she is good with math and slugs back whiskey, but not much else. Not even her physical appearance. The reader is just told she's a tough Covent Garden chick, but not really how she got that way, other than being an orphan.
I would have liked more development of Hawk. The prologue backstory helps some, but it is from the H's POV. It would have been nice to have some idea of Hawk's movements, biding his time, stalking his prey. Four years is a long time to hold a grudge. What was he doing all that time? The reader is just told he's a bad guy, and other than the prologue, we don't really know what he's done.
And the H eventually realizes he loves the h, but it's just like a light bulb turning on over his head. We don't get to see his transformation, because we don't get to see his interactions with the h. We are told they are practicing self defense. We are told they are having sex like monkeys. And aside from the first times for both, we don't get to see it. There could have been so much character development in the self defense lessons alone. The two sex scenes were bland at best. The one with the pianoforte was confusing, as I'm not sure how tall a pianoforte is, and wasn't sure of the physical possibility of the encounter. It needed more description.
So while I consider the previous book in this series, (Lady Constantine and the Sins of Lord Kilgore) to be one of the author's best, I can't recommend this book. This surprises me, as I have read all her others and never been disappointed. It's almost as if it was written by someone else. The lack of development is just so unlike the author's other books.
Read more
6 people found this helpful
Helpful
Report abuse

LGriffith
1.0 out of 5 stars Big disappointment
Reviewed in the United States on June 1, 2021
Verified Purchase
I love Julie Johnstone's books, especially this series. However, I was confused because the poor writing wasn't something I would have expected from a Julie Johnstone book. I felt that I needed more details of the 'surroundings' (i.e., I could not 'visualize' this book as it lacked notable descriptions throughout, including the H's tavern, warehouse, what he looked like, etc.); I thought that Hawk's character would have been more prevalent in the story line; I also felt that this book had illogical scenes. I did not feel any connection with the H, h and, to a certain degree, Blythe. The only part of this book that perked me up was the developing relationship between Blythe and Frederica's brother.
Read more
3 people found this helpful
Helpful
Report abuse

Élodie Nicoli
TOP 1000 REVIEWER
4.0 out of 5 stars A knight to her rescue ...
Reviewed in the United States on May 10, 2021
Verified Purchase
Will her restlessness cause more harm than good ...

I have to say I was not much fond of Freddy. I understand her plight but she also knew the risks, she just had to wait a bit more and she would been “free” to do as she wished without causing a scandal reflecting on the others and threatening more than her own future.
Thankfully her selfishness is redeemed by her actions following her fall from grace.
She is restless, why she knows she is not fit to be a proper lady, she is the kind of person who runs straight into danger unprepared or believing she has all the clues when she is well over her head. But she does out of love, to protect others even if she also has an ulterior motive, to prove she can be more than a Mayfair lady.
Gabriel is truly an Angel, he fights for and protects the weakest, he lives with the guilt to have been unable to save his mother, but was only a kid, and since outdo himself to provide for his sister. His history with their late friend Georgiana is proof of his goodness. He would sacrifice himself to rescue her.
But with Freddy, it comes with a price, a sword of Damocles hanging above her security and his. Why he is so long to relent.
He has to battle with his attraction to her but also the weight it might cost them if he gives in.
A true knight.

Together they will have a full mined field to cross before getting everything right. Their chemistry will lead them but their heart will find a way out.
4 stars

Lori Dykes
5.0 out of 5 stars Not to be Missed!
Reviewed in the United States on May 13, 2021
Verified Purchase
London, England 1839
The beginning of this amazing tale set the stage for what drove the hero, Gabriel and I could not wait to see what would happen. As fun loving as the title, there was a slightly darker side that clenched my heart for Gabe and Freddy.

Gabe, known as the Lord of London's underworld, was doing his best to not get close or love Freddy because he knew what would happen. It might get her killed. Freddy only wanted to break free of her society life because she felt she had never "fit" the mold and only wanted freedom.

But the attraction between them was explosive to say the least and as much as he fought it more than she, it was a losing battle.

Gabe won my heart at the very beginning. Yes, he had lived a life he was forced to live but he had such a good heart, and fiercely protected those he cared about or those who needed defending. Sigh.

Julie pens another glorious tale that I wanted to read as fast as I could, but never wanted it to end! Definitely going on my to be read again shelf! Do not miss this or any of the fabulous books in this series. You can thank me later!
Read more
One person found this helpful
Helpful
Report abuse

Victoria
5.0 out of 5 stars Another Great Love Story
Reviewed in the United States on May 10, 2021
Verified Purchase
I love that this book starts out with a "bang"....I always knew that Freddy would find the perfect match
for her unconventional personality. I loved the drama with Gabe & how he comes to Freddy's rescue on
more than 1 occasion, her relationship with Blythe, Gabe's sister & how they get the "villian" in the end.
I am a huge fan of this author & she never fails to impress me with her twists & turns in her books...I highly recommend this book.
Read more
2 people found this helpful
Helpful
Report abuse
See all reviews

Amazon Customer
5.0 out of 5 stars Beautiful story for Gabe and Freddy
Reviewed in the United Kingdom on May 12, 2021
Verified Purchase
This whole series was great, but I definitely had a soft spot for these two the whole way through and this was the perfect story for the pair of them. Lots of adventure, emotionally satisfying and a plucky heroine you can't help but love and a man who deserves her. Well worth a read!!
Read more
Report abuse

Mrs LM Rockminster
5.0 out of 5 stars Fantastic, worth the wait..
Reviewed in the United Kingdom on June 2, 2021
Verified Purchase
Another fabulous story and Freddy & Gabes story was well worth the wait. So satisfying and beautifully written.
Read more
Report abuse

Bookosaurus
5.0 out of 5 stars Lovely!
Reviewed in India on May 23, 2021
Verified Purchase
A nice, short story to love...the chemistry is electrifying and I enjoyed how Julie brought out the inner struggle of Gabe. This was a sweet story with lovable characters...Good for a quick read.
Read more
Report abuse

Amazon Customer
5.0 out of 5 stars The best till the end.
Reviewed in Australia on September 27, 2021
Verified Purchase
I have loved this series, each & every tale but I think this was my absolute favourite.
Freddy & Gabriel, sigh…
Read more
Report abuse
See all reviews