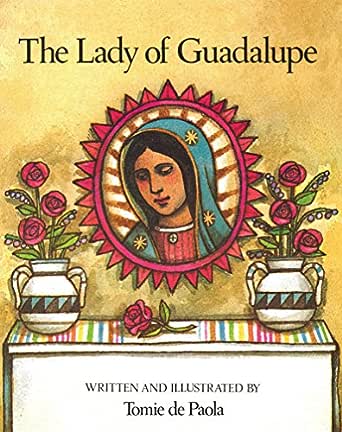 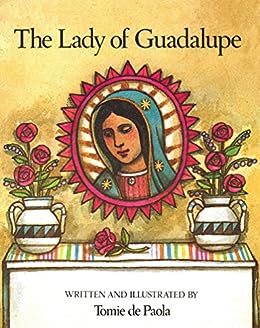 The Lady of Guadalupe Kindle Edition

“Smoothly integrated text and illustrations.”—Booklist
--This text refers to an alternate kindle_edition edition.

Tomie dePaola (b. 1934) is best known for his books for children. He has written and/or illustrated nearly 250 books. Over 15 million copies of his books have sold. The Birds of Bethlehem is his newest book. Strega Nona Does it Again will be published in fall 2013.
Born in Meriden, Connecticut, dePaola received his BFA from Pratt Institute in Brooklyn, New York, and his MFA from the California College of Arts in Oakland, California. He received a doctoral equivalency in fine arts from Lone Mountain College in San Francisco.
In addition to writing and illustrating children’s books, dePaola taught for several years in art and theater departments in colleges in California, Massachusetts, and New Hampshire.
DePaola has received many prestigious awards, including the Smithson Medal from the Smithsonian Institution, the Kerlan Award from the University of Minnesota, the Regina Medal from the Catholic Library Association, and the Sarah Josepha Hale Award, a prestigious distinction in writing by a New Englander.
He was also the United States nominee in 1990 for the international Hans Christian Andersen Award in illustration. The American Library Association named Strega Nona a Caldecott Honor Book and 26 Fairmount Avenue a Newbery Honor Book. He was the 2011 Laura Ingalls Wilder Award recipient for “substantial and lasting contribution to literature for children.” He received the Society of Illustrators Original Art Show Lifetime Achievement Award in 2012.
The University of Connecticut, Georgetown University, and Pratt Institute, among others, have granted him honorary doctoral degrees. Pratt Institute, in 2012, named him “one of the top 125 Pratt icons of all time.” In 1999, he was selected for the New Hampshire Governor’s Arts Award of Living Treasure.
DePaola makes his home in New London, New Hampshire, where he works in a renovated 200-year-old barn. Visit the author at www.tomie.com and www.tomiesblog.blogspot.com.  --This text refers to an alternate kindle_edition edition.

5.0 out of 5 stars
5 out of 5
27 global ratings
How are ratings calculated?
To calculate the overall star rating and percentage breakdown by star, we don’t use a simple average. Instead, our system considers things like how recent a review is and if the reviewer bought the item on Amazon. It also analyzes reviews to verify trustworthiness.
Top reviews

Heidi
5.0 out of 5 stars Wonderful Tomie dePaola retelling. Not disappointed.
Reviewed in the United States on March 27, 2019
Verified Purchase
Grateful to have such a beautiful retelling of The Lady of Guadalupe. Can’t recommend it enough.
Read more
Helpful
Comment Report abuse

cab32
5.0 out of 5 stars Well told and illustrated.
Reviewed in the United States on December 19, 2019
Verified Purchase
As usual, dePaola’s illustrations are fabulous and never too cutesy. I also like how the story is told very thoroughly, but still simply. A great introduction to this wonderful story of faith.
Read more
Helpful
Comment Report abuse

Joe Abeleda
5.0 out of 5 stars Wonderful.
Reviewed in the United States on March 14, 2017
Verified Purchase
I really enjoyed the way DePaolo illustrates the beautiful story of our Lady of Guadalupe. My daughter's attention was captured during the whole book. What a wonderful tool to pass down yet another jewel of our faith.
Read more
One person found this helpful
Helpful
Comment Report abuse

PJF
5.0 out of 5 stars Awesome illustrations
Reviewed in the United States on December 16, 2015
Verified Purchase
A beautiful story. My family loves reading Tomie de Paolas books. He is one of my favorite chldren's authors. This is one of his best books yet! The illustrations fit the story perfectly, and de Paola wrote the story so that kids of all ages can understand it.
Read more
One person found this helpful
Helpful
Comment Report abuse

Kindle Customer
5.0 out of 5 stars the miracle of Our Lady of Guadalupe for children
Reviewed in the United States on December 2, 2014
Verified Purchase
DePaulo's book is a beautifully illustrated and complete retelling of the events surrounding the miracles of the apparitions of Our Lady of Guadalupe in Mexico. Would be appropriate for a wide age range of children.
Read more
2 people found this helpful
Helpful
Comment Report abuse

M. H Mele
5.0 out of 5 stars Even nicer than expected.
Reviewed in the United States on December 23, 2009
Verified Purchase
I've read this story aloud to children in our family and to religious education classes a hundred times and the experience lingers. It is written for reading aloud. Perfect.
Read more
2 people found this helpful
Helpful
Comment Report abuse
See all reviews