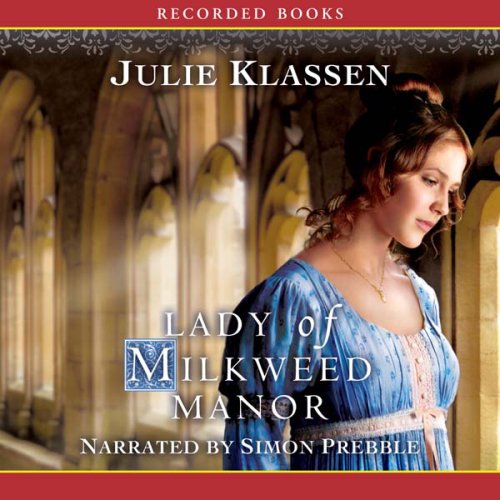 Julie Klassen (Author), Simon Prebble (Narrator), Recorded Books (Publisher) & 0 more
4.5 out of 5 stars 445 ratings
See all formats and editions
Sorry, there was a problem loading this page. Try again.
In the tradition of Jane Austen and Charlotte Brontë, debut author Julie Klassen delivers a compelling Regency Era novel brimming with authentic period details, vibrant characters, and enthralling plot twists. Banished from hearth and home, a vicar's 20-year-old daughter pays dearly for a single lapse in judgment. To avoid the scorn of local villagers, Charlotte Lamb wends her way to the forbidding Milkweed Manor on the outskirts of London. Concealing her identity, she finds refuge within the dank confines of this mysterious bastion of old secrets and new life. She soon encounters a former suitor, harboring secrets of his own. Firmly relying on God's strength, both resolve to protect their loved ones. But neither realizes the level of self-sacrifice this will require.
Read more
©2007 Julie Klassen (P)2008 Recorded Books,LLC
Previous page
Next page

Special invitation from Audible!
Learn more about Membership
List Price: $32.87
You Save: $3.92 (12%)
By completing your purchase, you agree to Audible’s Conditions Of Use
Sold and delivered by Audible, an Amazon company
Share

Randi Annie Framnes
5.0 out of 5 stars Need for protection from gossip and condemnation in society
Reviewed in the United States on February 22, 2020
Verified Purchase
Charlotte Lamb, a vicar’s daughter, has made a mistake which has taken her to this hideaway for expectant mothers so both her family and herself may be protected from condemnation and gossip in the local community.
I really enjoyed this glimpse into the lives of vulnerable women in Edwardian England. How out of wedlock pregnancies were dealt with which made a place like Milkweed Manor necessary.
Even though there is a serious issue being dealt with here, I feel like Klassen still manages to make this work a fascinating read with all the staple ingredients we expect to find when reading her work.
I highly recommend this read to anyone who enjoys historical romance fiction and fans of Klassen’s work.
(All opinions in this review are my own).
Read more
5 people found this helpful
Helpful
Report abuse

Beth
5.0 out of 5 stars A whole new field....
Reviewed in the United States on September 29, 2015
Verified Purchase
I read a lot of critical reviews of this book and almost didn't read it. I'm so glad I did. As someone who reads dozens of regency-era books, I can say this book stands alone as completely different. In this book we are given a glimpse of real life from this time period instead of the romanticized fairy-tale version. I personally believe that is why this book garnered criticism... people love fairy tales and this one isn't. It's real. It's hard. It's heart wrenching, and uncomfortable. Through it all, however, the author wove a beautiful tapestry of honor, grace and forgiveness in the midst of mire. I found myself shaken by many of the difficult positions the characters are faced with, I felt their struggle, their pain, and shared in their healing. I'll be honest, this isn't a light read but well worth the journey. You just might find something inside you changed for having embarked on the trip, and that places this book in a whole new field of excellent.
Read more
21 people found this helpful
Helpful
Report abuse

Debbie Gomes
5.0 out of 5 stars An excellent book
Reviewed in the United States on May 12, 2014
Verified Purchase
A great story. I really enjoyed this story, I loved the characters, the history, the storyline. I read a lot of Christian fiction and I have read many of the reviews for this book. Most of the reviews are high 4 or 5 star reviews. I will address a few of the lower reviews. I did not find anything depressing about the book that was not an important part of the story. I read several reviews addressing Charlotte being pregnant out of wedlock, I don't think the writer made that feel like a flattering or good choice for young Charlotte as she paid dearly for her sin. I also read in a few reviews that did not believe there was enough Jesus centered characters. While I am not saying that this is the most spiritual book I have ever read, God, the Bible, prayer, forgiveness, consequences of our sins fill the pages if we look. I love this author and the two books I have read by her have been clean, full of history that is well researched, mysterious storylines,. I do love to read books that pull at my heart toward Jesus. That being said not every christian author has the same style as the next. I believe Christian and non Christian readers will FALL IN LOVE WITH THIS BOOK IT IS EXCEPTIONAL!!!!
Read more
5 people found this helpful
Helpful
Report abuse

LadyoftheIvy
5.0 out of 5 stars Wonderful novel!
Reviewed in the United States on March 21, 2012
Verified Purchase
I have now actually read this book twice, as I enjoyed it enough to read it again. It's a very well done book, and also feels to be very well researched. I also especially like that it's set in the Regency period, but then, I'm rather fond of books set in the Regency era. I enjoy Jane Austen's books, as well as Georgette Heyer. Julie Klassen has her own style different from both of those authors, but her books are still very well written. It's a hard book to put down.

The characters are very well developed and fleshed out. Charlotte is easy to like as a character, and it's fairly easy to sympathize with her given the situation she's in at the beginning of the book - she's found herself pregnant and unmarried. Her father is a rather strict vicar, and her sister somewhat uncaring and unsympathetic, so she's been sent off in shame. The story behind it all slowly comes to light as she begins a new life at the Manor. The main male character, Dr. Taylor, is also well done and easy to sympathize with as well. Basically, without giving away the story, I found all of the characters in the book to be pretty well done, even those who aren't major or who aren't necessarily designed to be well-liked.

Beyond enjoying how well written this book is, I did learn a fair amount about pregnancy, breastfeeding, and what life was like for unwed mothers in the 19th century. As a mother myself, and as one who has nursed all of my children, it really was fascinating. And all of that isn't even necessarily the main point, those are all just parts of the story. The main part is a romance, and it doesn't necessarily follow the typical path that they do in many books. It also does extremely well as inspirational fiction as the Christian elements are included in such a way that they're not shoved down your throat in an offensive fashion. They're more subtle than some inspirational fiction, but still there and done in a very pleasant way. I enjoy inspirational fiction, though this one is likely to be enjoyed even by those who aren't necessarily looking for that sort of book.

I will say that this book is a bit darker than a typical romance, but that doesn't detract from it for me. There are times when I cried reading this book, and times when I was overwhelmed with joy. But it's not a formula romance, and is just extremely well written. It also handles its potentially touchier subjects (such as when Charlotte gets pregnant) with great care, which I admire much more than books that feel the need to describe everything in lurid detail.

Julie Klassen is currently one of my favorite authors, and I think this is my favorite book by her. But ultimately, I would recommend any of her books so far, as they've all been well researched and very well written.
Read more
3 people found this helpful
Helpful
Report abuse
See all reviews

Bookworm
3.0 out of 5 stars Not a Keeper.
Reviewed in the United Kingdom on April 14, 2013
Verified Purchase
I only discovered Julie klassens books about six months ago. I read the 'Girl At The Gatehouse' and I was hooked. I ordered the rest of her books and had The Tutor's Daughter on pre order. However, I know now if I had read this one first I would not have read anymore. I can't put my finger on it but I found it an uncomfortable read. I didn't like the story content. It only spoke about 'secrets' on the blurb on the back and not what the story was about.
If I had known what it was I would have given this a miss. Having said that, it is as well written as the rest of her novels and there is obviously a great deal of research done beforehand.I like the way there is a quote or passage at the begining of every chapter
Of course this is only my opinion and the other reviewers obviously liked it.
Read more
One person found this helpful
Report abuse

Bright Bubble
4.0 out of 5 stars Curl up with a good book!
Reviewed in the United Kingdom on January 1, 2020
Verified Purchase
To curl up with a good book is a must & this is just the book to read when you feel like this. Keeps you reading & meeting with Jesus in its pages too. What's better than that?!
Read more
Report abuse

Joy
5.0 out of 5 stars Old fashioned romance at its best
Reviewed in the United Kingdom on July 28, 2014
Verified Purchase
I have enjoyed reading almost all of Julie Klaqssen books. I love to absorb myself in the old fashioned values and the christian way of life. I loved the storyline about the manor for unwed mothers I learned a lot from it. I love these kind of romances, not mushy or sexy or violent, very refreshing! I keep looking out for more of these kind of books.
Read more
3 people found this helpful
Report abuse

Judith Williams
4.0 out of 5 stars Lady of Milkweed Manor
Reviewed in the United Kingdom on February 16, 2014
Verified Purchase
I have read a number of Julie Klassen books and enjoyed reading each one of them. I would not like to say which is my favourite because I have enjoyed reading them all and have a few of her books to read yet. Her novels are of the Victorian era and also have a Christian background.
Read more
Report abuse