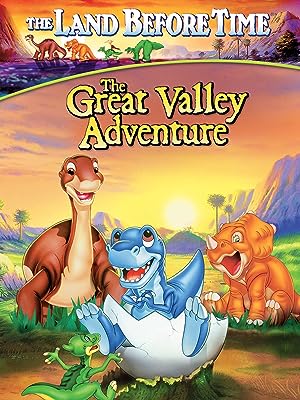 (1,959)
5.81 h 13 min1994X-RayG
Five young dinosaurs accidentally cause a landslide which leaves an opening for predators to enter their peaceful valley. With the help of a baby T-Rex, they face many dangers including some sly scavengers to repair the damage.

Jonathan BuchananReviewed in the United States on September 5, 2019
4.0 out of 5 stars
Fun little film; do not trust the trailer’s video quality
Verified purchase
There are some things from my childhood that aged well into my adult years (Star Wars, Muppets, Tom & Jerry) and some that I’m a little embarrassed to admit I liked (Pokemon, Barney). For the life of me, I did not think The Land Before Time II would fall into the “aged well” category (yeah, I’m using Roman numeral; I’m classy :) ). I haven’t watched it since the 90s and I have given little thought to one of my favorite film franchises as a kid since (so why did I rent it this past weekend? Don’t rush me, I’ll get to it). Well, I was in for a pleasant surprise: I still enjoyed the film.

Don’t get me wrong, this is no hidden masterpiece of film art. It’s a 90s direct-to-video film and it shows. The story’s not deep, the animation is a bit stiff at times, and the songs can be annoying depending on your taste in music.

That said, not every film needs to be Schindler’s List. It’s still a cute adventure film that teaches kids not to hurry growing up that wasn’t too preachy. It’s bright and colorful but not exceedingly so and the songs are pretty catchy (I stand by “Peaceful Valley” being one of my favorite songs). The animation IS decent. There are some weird choices (even as a kid, I always thought Littlefoot was swallowing just before the last chorus of “We’re a Family and You’re One of Us Now”) and it can sometimes be stiff, but it’s certainly not the worst I’ve seen. It’s not Disney, Pixar, or even Don Bluth quality (that last one is important considering why there’s a II in this film’s title) but it’s a lot better than Hanna-Barbera or Filmation animation.

I’ll use that to segue into WHY I decide to re-watch the film when my first paragraph made it clear I was otherwise uninterested. It was nostalgia mixed with curiosity about the film being available in HD on Amazon (which I found out just playing around the site one day). Let me say, it was very good looking, with clear and colorful video. The backgrounds were gorgeous and almost stole my attention for the dinos in front of them. That’s not to say the characters didn’t look great. The linework was solid, with even the paler colors looking great. It’s not a perfect picture, but any faults are because of the relative cheapness in making the film in the 1990s, not the remastering in the 2010s. To those who like watching films in HD, love the Land Before Time series, but loathe giving up physical media: I’m sorry to say this to you but digital streaming is currently the best option to watch The Land Before Time II and the other sequels unless a Blu-Ray set is coming (I haven’t watched the others but my guess is they’re about the same).

Now to explain the 2nd half of my title: the trailer (actually just a 2-minute section of the film) is sourced from the 1994 master (there’s a 2012 copyright notice at the end of the trailer but I’m figuring that trailer’s video was a digitization of the 1994 tape master and the actual celluloid wasn’t rescanned before the HD remaster) and, while it’s still a good image, it doesn’t reflect the quality of the remastered feature film and shouldn’t be used to judge the video quality (I don’t how the SD copy looks; sorry).

It’s not the greatest animated film and it certainly suffers with so many better kids’ films available, up to and including its own classic predecessor. However, there are far, FAR worse films you can show kids that are shallower than this (Minions and Angry Birds would, for me at least, lose to this film). The Land Before Time II: The Great Valley Adventure is a fun film and definitely worth at least one viewing, especially if you watched it as a kid, have a kid, or are a kid at heart who can appreciate a less-than-great film for its good points.

PuroshotumReviewed in the United States on August 23, 2020
5.0 out of 5 stars
Chomper should have ate them all except...
Verified purchase
Chomper should have ate them all except Little Foot. Cera is always the bully so she gets eaten, Ducky is annoying saying the same thing multiple times. Like when Petrie said "He need me whole bunch" putting Chompers face on his face. Then Ducky says "No Chomper you cannot eat Petrie. Nooo!" "I said no. Just like my parents. Oh no, no, no, no, no." With that annoying exchange Petrie and Ducky could be the appetizers". Cera will be the main course and Spike could be desert. Actually, I like Spike so he's safe along with Little Foot.
2 people found this helpful

MC320Reviewed in the United States on July 23, 2020
5.0 out of 5 stars
I purchased this movie 3 times! Lol Highly recommenced!
Verified purchase
Purchased for my 3 year old granddaughter (actually bought twice, once on my sons account to watch downstairs and paid him cash and again from my account so we could continue to watch it in my room)...Actually bought 3 times, because my kids watched it when they were little. It’s wholesome and teaches kids many lessons of life and friendships. I enjoyed watching it myself!
One person found this helpful

Juan LopezReviewed in the United States on November 29, 2020
3.0 out of 5 stars
Not like the first one
Verified purchase
Eh, after having just watched the first one this was barely palatable for me. My 4 year old didn't seem as engaged either. The musical segments seemed forced and awkward. The first LBT was a great movie experience with my daughter. One of the best actually. We both laughed and she cried during some scenes and we both loved it. This fell short.

R. C. TapiaReviewed in the United States on November 5, 2010
4.0 out of 5 stars
pattern, but cute story
Verified purchase
I bought this movie because my son has become obsessed with Land before Time. I got tired of watching the same 2 over and over again so I ordered about 5 different ones. Since now I have about 7 and watch them VERY frequently I have noticed a pattern with these.
First of all none of them have compared to the first which is by far my favorite for several reasons. The main reason being that it is one of the only ones where the kids get seperated from their families and they search to be with them. In EVERY other movie I own the kids run of on their on there own without their parents!!! This drives me crazy! There are great morals in most of these stories but the fact that nearly every movie they run off behind their parents back annoys me to no end. What kind of message does that send our kids??
In this one Duckies egg/brother or sister gets egg napped. They end up finding a sharp teeth egg instead (but dont worry duckies sibling is okay too). And where did they chase these egg nappers to- you got it into the mysterious beyound, without their parents AGAIN!?!?! But anyways the movie is cute- mainly because Chomper is a cute addition to the movie. I know he is another one but I have not been able to find that one- they end up on an island with sharpteeth on it, anyone know that one? The egg nappers are more annoying then funny but oh well. The kids have another adventure and learn some lessons along the way.
4 people found this helpful

TiffanyReviewed in the United States on September 12, 2015
5.0 out of 5 stars
Great for my toddler!!!
Verified purchase
As an adult not my cup of tea and personally I think the 1st Land Before Time was the best. That being said, my toddler LOVES this movie and we have literally watched it almost everyday since finding it on Prime. It's not the most annoying kids' show so that's nice. It's nice, clean, and simple. I haven't noticed any "iffy" subcontext or anything. Only problem is that there are so many in this series but only 1 is on Prime and it's the 2nd in the series). A variety would be nice but don't really want to purchase the movies either.
One person found this helpful

Special Ed TeacherReviewed in the United States on June 15, 2013
5.0 out of 5 stars
Great Educational Movie
Verified purchase
Both the Land Before Time 1 and 2 are great educational videos for kids from age 3 up. They teach all the dinosaur basics, herbivore/carnivore, different types of dinosaurs, volcanoes, tar pits, what the earth was like back then, etc. All the things I teach kids about dinosaurs is retaught in these movies. They use simpler names for the kids instead of the actual dinosaur names, but kids learn how to categorize all the different dinosaurs this way, which is perfect. If you teach dinosaurs, you'll want these movies!
See all reviews
Back to top
Get to Know Us
Make Money with Us
Amazon Payment Products
Let Us Help You
EnglishChoose a language for shopping. United StatesChoose a country/region for shopping.
© 1996-2022, Amazon.com, Inc. or its affiliates