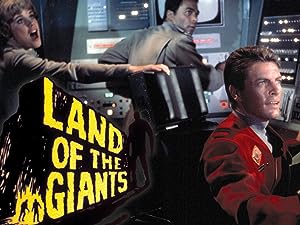 Land of the Giants

(252)
7.11969ALL
Flight insurance is no consolation: Seven travelers to London wind up in a space warp and land on a planet whose inhabitants are 12 times their size.

Kid IcarusReviewed in the United States on April 30, 2018
4.0 out of 5 stars
amazon always "Generalizes" but this is a mix of season 1 great! good for collector and season 2 awful need to take to dumpster!
Verified purchase
to be clear, this show I base only on season 1 as that is all that counts really for LoG. Moving, good writing very emotional at times and characters worked in a relatable way from situation to situation! no this is not for the Harlan Ellison Obsessive-compulsive All science FICTION must adhere to 20th century hard fact! "puritan" crowd but, instead it was believable if not realistic(and it wasn't meant to be, it is a kid's show!) the giants played a good role too, and so did the relations with crew. you actually felt for everybody, excellent antagonist too!(Kevin Hagan-inspector Dobbs Kobek the pursuing giant who would not stop stalking them.)
season 2, on the other hand was written by amaturs, in fact, the fat kid with a video camera could make a better plot for his teenage highschool project in his back yard!
and the most obsurd motive for plot as Deanna Lund getting stuck in a atomaton cogwheel for likely 15 (her time) minutes while Betty calls the police(why do you need the police! Valery's foot would have been cut off within seconds of the giant's mechanzim clockworks!) or the giant vet working on a dog the size of a pencil eraser. this and a lot of lazy half-baked ideas pressured for no reason, also the reason Betty(Heather young) was so ill used was because the actress was pregnant. not the reason to quit the series but tell tale to its down fall in the midst of the bad writing of season two. I'd say "Choose your own adventure" children's books were written better. Valery always being put in a penny jar. that was mine(LOL) but the dancing doll in a cage or the "big star" in a doll house with a broken hasbeen (the great John Carradine) reflects the pathetic writing for this portrayal of a out of his luck actor.(good irony) as this wasn't the acting or even the production of season 2 which was good, it was the horrid plot motives! very amatur! if I went to the studio agent and said "hey why not put Valerie and Fitzsu in a gumball machine and sell them for giant pennies and have Steve, Mark and Dan rescue them with their paperclip and periscope" they would probably accept it with all the other losers! not in season one they wouldn't! get it for season 1 do not bother with 2!

PMGBReviewed in the United States on November 5, 2020
5.0 out of 5 stars
Brings back memories
Verified purchase
Loved the show, I watched the show when I was little, is nice to have the opportunity to buy it in a digital format

K. BryantReviewed in the United States on February 18, 2021
3.0 out of 5 stars
Just OK
Verified purchase
A lot cheesier than my husband remembered. I'm not a fan of the show.

Amazon CustomerReviewed in the United States on May 12, 2020
5.0 out of 5 stars
LAND OF THE GIANTS SEASON 1
Verified purchase
I REMEMBER THIS AS A KID AND I LOVE WATCHING IT

Joe CarrierReviewed in the United States on May 13, 2020
5.0 out of 5 stars
Love the little people
Verified purchase
Again loved watching this show as a kid

Reginald D. GarrardReviewed in the United States on August 10, 2007
5.0 out of 5 stars
So what if it's not "Masterpiece Theatre"
Verified purchase
Irwin Allen went to his grave with several titles: "The Master of Disaster," "A schlockmeister," and "a visionary." Well, the labels may or may not have been warranted but one can't help but give him credit for making fare that was popular during its day.

Perhaps, "The Crash," the pilot for Allen's two-season-long "Land of the Giants" is his best effort as a director. It features the producer/director's signature television elements: lots of special effects, a cast of seven, a pretty decent, if implausible, story line, and a brilliant score from a young John Williams.

The download offered has crisp color and sound, actually better than the initial television airing back in 1969. The actors, though they would not go on to do things bigger, acquaint themselves well as Earth folk trapped in a world of gargantuan proportions.

Adventure was the mainstay of Allen productions and this one fills that bill nicely. In a time when most effects are handled in the computer, it's kind of refreshing to see the giant props that had to be manufactured to take viewers to the "land of the giants."

"Ghost Town," the second installment of "Land of the Giants" finds our band of seven earthlings making the acquaintance of an elderly inventor/builder (Percy Herbert) and his hellish granddaughter (Amber Flower). The younger delights in terrorizing the little people as they try to escape from a life-size town, constructed by the old man.

Impressive set pieces and an eerieness, reminiscent of a "Twilight Zone" episode are the highlights of this episode. Reworking John Williams score from the pilot episode elevate this one to classic status.

Other first season gems are "Weird World" with Glenn Corbett as a crazed Earthman, "Double Cross" with Kurt Kaszner's "Fitzhugh" suffering amnesia, and "Genius at Work," notable for the inspired casting of "special guest star" Ronny Howard and Vic Perrin, the voice of "The Outer Limits."

"Pay the Piper," from the show's second season, benefits from the one-time pairing of two of Allen's hammiest actors: Jonathan Harris (immortalized as "Lost in Space's" Dr. Smith) and Kurt Kasner ("Giants" Commander Fitzhugh). It seems as though both actors tried to see who could get away with the most scene chewery and it shows in their appearances together. Though the plot is not that intriguing, the two acquaint themselves nicely.

"Clones" allows cast member Don Marshall a moment to shine as his "Dan" character has doubts as to whether he is real or fake. "The Unsuspected" showcases star Gary Conway as his character deals with paranoia as the result of hallucinogenic mushrooms.

"Graveyard of Fools," the last episode of the series, is perfect for a show that started at the end of the "swinging sixties." It has a rather psychedelic quality about it, in lighting, special effects, and mood. Somewhat incoherent in plot, it's still representative of best (or worst) of Allen's creations.
6 people found this helpful

DCReviewed in the United States on March 21, 2020
5.0 out of 5 stars
Huge on entertainment
Verified purchase
One of the greatest shows ever

fran55Reviewed in the United States on November 21, 2019
4.0 out of 5 stars
Good science fiction
Verified purchase
Two thumps up
See all reviews
Back to top
Get to Know Us
Make Money with Us
Amazon Payment Products
Let Us Help You
EnglishChoose a language for shopping. United StatesChoose a country/region for shopping.
© 1996-2021, Amazon.com, Inc. or its affiliates