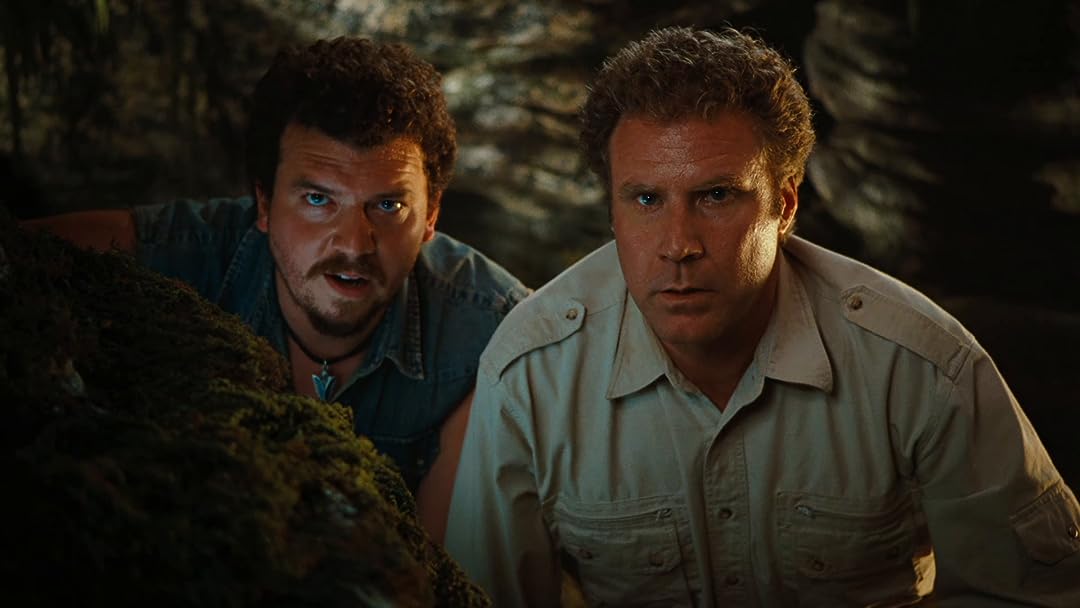 Land Of The Lost

(9,162)
5.31 h 42 min2009X-RayPG-13
On his latest expedition, Dr. Rick Marshall, his research assistant and a redneck survivalist get sucked into an alternate universe filled with dinosaurs and other fantastical creatures.

PaulReviewed in the United States on April 8, 2020
1.0 out of 5 stars
Dirty movie
Verified purchase
Typical Hollywood style they had to ruin it with gross homosexual behaviors. This occurs towards the end where all three males have a sexual encounter which is heavily eluded to. The co-star begins by daring Will Ferrel to stick his tongue in the “monkey boy” caveman’s mouth. Next thing they are waking up to all three cuddling in the “69” position. Totally disgusting!
68 people found this helpful

CalipeteReviewed in the United States on June 8, 2020
1.0 out of 5 stars
A new level of stupid
Verified purchase
I knew the original show I watched as a kid was stupid, so I was expecting stupid. That was the fun in it, or so I thought. Sadly, not only did this movie have nothing to do with the original story, but it really reached a new low level of stupid. They essentially just took some (but not all) of the key characters from the show, and stuck them into an entirely different story, one that doesn't even align with the original show. Very disappointing. At least I have VidAngel to filter the inappropriate content, or it would be totally unwatchable with little kids.
26 people found this helpful

DebDebReviewed in the United States on May 8, 2019
1.0 out of 5 stars
Shut it off
Verified purchase
We watched the first 15-20 mins. and shut off. Everything had sexual tendencies, not entertaining at all. What a waste of money on a movie
44 people found this helpful

Amber EReviewed in the United States on September 22, 2018
1.0 out of 5 stars
Horrible
Verified purchase
Why do they have to add so much smut and swearing into a movie that kids will most definitely watch. It makes me sick. Such a disappointment.
54 people found this helpful

PhillipReviewed in the United States on January 26, 2017
5.0 out of 5 stars
Crazy Stupid_Close your mouth like we talked about!
Verified purchase
I love this movie. It is so stupid funny. Matt Lauer has two great short pieces. Will Farrell as Dr. Rick Marshall, Anna Friel as "Holly,", and Danny McBride (who is a hilarious "Will), make a great team.

This is a Will Ferrell movie, so people who are expecting anything near serious -- you will not find it here. However, if you ever saw the original series (which my children watched), with the Sleestak, this was a good tie in. There are actually a number of points one might miss, watching for the first time, that point back to the original series. One thing however, that is very clear. This Holly is nothing like the original, who was a preteen. Anna Friel is definitely NOT a preteen.

Lastly -- I should mention Chatka, played by Jorma Taccone. His role is essential and he adds a lot of humor and partially ties the plot together.

I watch this movie when I need a break from this crazy world. This is a crazy movie, tied to a 1970s childrens' TV show. It makes me laugh every time I watch it, and I see more details each time.

Brant ShepherdReviewed in the United States on January 9, 2021
2.0 out of 5 stars
Good for a couple of laughs
Verified purchase
I like Will Ferrell, but usually he's funny because of his overplay of things (see Anchorman or Zoolander) or a good deadpan delivery of an extremely funny line (like what happens here a few times). You get a few Ferrell flip-outs, and some good gags, and that's all well and good.
I can't remember the name of the guy that plays Will, but it seems that every role he's hired for requires some kind of sexual props and/or humor. I think almost anyone can deliver a line while holding up a mug with boobs on it and get the same number of laughs from me (total: 0). I honestly think he only gets roles because writers are like "okay, we need some raunch in here, who do you think would degrade themselves enough to do it?" "Oh, get that guy who played Will in The Land of the Lost."
You're not getting anything close to a good plot or fantastic writing. If you want to burn some time and chuckle a couple of times, go with this one. Otherwise, skip it. You're not missing much.

Also, in response to some of the one star reviews, who in the world turned this movie on seeing it was Will Ferrell and that other guy who's never been in a movie that DIDN'T have a pretty high level of raunch and thought "Oh, kids, that looks good!"

Charles BurgessReviewed in the United States on January 18, 2021
5.0 out of 5 stars
Hallucinogen simulator 2009
Verified purchase
Have you ever wondered what it was like to do drugs but didn't actually want to do drugs? or risk getting in trouble for having drugs? or losing your job because of drugs? Then this movie is for you. It's like whoever created this movie threw a bunch of random ideas at the wall and see what sticks, and then went with that, plus everything else that didn't, the end result being a movie that only Will Farrell could star in. The story is one that gets weirder, but more interesting at the same time, with a small segment you just have to grind your way through, the kind of movie where the last few ideas blew the budget, so they had to improvise. a good chunk of the film had excellent special effects and comedy sequences, while having quite a few of what could only be described as the cinematic equivalent of fingerprints on an otherwise clean sheet of glass (referencing the lizard people). Then again, this film is from 2009, CGI has come a LOOONG way since then. Either way, when you have a movie as loosely strung together as this one, I guess it is quite unfair to expect a cinematic marvel, so just sit back and enjoy, have a good laugh, and keep your expectations low.

All in all, what they did well, they did REALLY well, but took a toll elsewhere. I do feel like they could have gone down a better path near the end, but I'm not about to sit here and complain for the next hour, as my complaining will not change anything about this film, and will only waste your time to read.
7 people found this helpful

Amazon CustomerReviewed in the United States on January 29, 2021
1.0 out of 5 stars
I watched this all the way through for the same reason someone would climb a mountain
Verified purchase
...in order to suffer terrible frostbite and die in my tracks in the snow.

Just kidding. This has nothing to do with mountaineering. It's just a really terrible movie. Will Ferrell had a couple of lucky characters on SNL that somehow established him as funny. And by being funny, I mean 1) shouting his lines, 2) taking off his shirt, and 3) being obnoxious. None of these behaviors are funny, per se'. But simple people laugh at them out of the sheer awkwardness.

Also, I'd really like to know what kind of sweet deal Danny McBride got from Lucifer that would make this droll everyman one of the hottest Hollywood properties in recent memory (probably the same deal Jack Black got, I'm sure). "Eastbound & Down" was the lower 48's version of "Trailer Park Boys", and they both live down to every expectation.

I suppose I watched this entirely because I watched the campy, silly Saturday morning TV show as a kid. Who would have known that the TV show would come off as Shakespeare compared to this movie.
3 people found this helpful
See all reviews
Back to top
Get to Know Us
Make Money with Us
Amazon Payment Products
Let Us Help You
EnglishChoose a language for shopping. United StatesChoose a country/region for shopping.
© 1996-2022, Amazon.com, Inc. or its affiliates