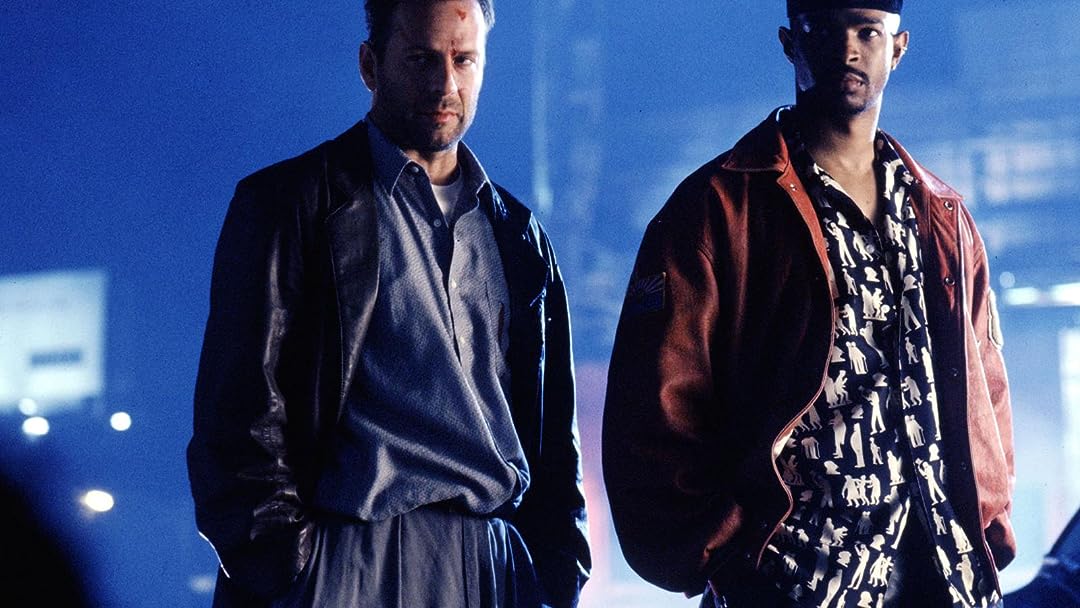 (2,924)
7.01 h 45 min1991X-RayR
Somewhere in Los Angeles, a stripper (Halle Berry) is murdered. Now the private detective (Bruce Willis) she had hired, and her ex-footballer boyfriend (Damon Wayans) are going to find her murderer if they don't kill each other first.

Yogi Under RepairReviewed in the United States on March 28, 2022
4.0 out of 5 stars
Excellent action from actors defining the genre
Verified purchase
This one almost seems like "Die Hard 2-1/2". I like it's close up and personal feel although I feel the script took something away from both the principal characters. The underlying story of each one was the way they were could have been rolled out in a much more interesting way to make each character more sympathetic. With the personal narrative style, bonding with the characters at the center of the story is so essential and a little of what you are left with is to bond based on who the actors are in other media - not who the characters are in the story. This lack of empathy building is what costs it a star to me. Other than that Wayans and Willis are perfect in this film. Each one is exemplary in playing out the character as defined and getting the most out of them. The action is quite entertaining with the villains properly two dimensional and detestable as they should be.
One person found this helpful

joel wingReviewed in the United States on August 15, 2022
3.0 out of 5 stars
Attitudes of Bruce Willis and Damon Wayans drive this buddy crime story
Verified purchase
Halley Berry gets killed and a washed up secret service agent Bruce Willis and an ex-football player Damon Wayans try to find out who did it in this buddy crime drama. Willis does good as the tough guy, alcoholic with his constant wisecracks. He tells a killer a series of fat jokes about his wife he has a gun pointed at his head. Wayans is able to counter Willis’ attitude. They even throw in Willis’ daughter into the mix who wants to be just like her dad with the foul mouth and smarts. It all made for a fun film.
One person found this helpful

DavidReviewed in the United States on July 30, 2015
4.0 out of 5 stars
Son, We're Going to a Ball Game
Verified purchase
It was advertised as a Die Hard-ish action picture, but The Last Boy Scout is more of a buddy-cop-detective thriller (not that that's a bad thing). I think this was the film where Bruce Willis abandoned the last vestiges of his self-effacing comedic persona (the first two Die Hards) and perfected his burned-out loser-with-a-heart-of-gold shtick (which bled back into the Die Hard films for better and worse). Some people love it, some not so much, but I think the record-breaking $1.75 million dollar script by Shane Black (Lethal Weapon 1 & 2, Long Kiss Goodnight) is worth the price of admission alone, and justifies both the title and the somewhat maudlin main character (he's a down-on-his luck private dick who used to work for the Secret Service; a wounded soul looking for a shot at redemption, who might find it in a case that turns surprisingly personal). Damon Wayans shows off both his comedic chops and his first jab at action and drama as a football star who gets caught up in the twisting-turning detective story, and has a motive for a little payback himself. The breezy, sarcastic script covers a lot of ground; its about a dysfunctional family striving for redemption, a lover looking for revenge, and two unlikely heroes literally battling for truth and justice in the sleazy back alleys and back rooms of Hollywood and the NFL (the fictional team here is the L.A. Stallions). Directed by Tony Scott (Top Gun, True Romance, Spy Game), its a slick-looking, A-list production, but those looking for a nitro-injected adrenaline flick like Die Hard might be let down by the more noir-ish pacing... of course, that being said, when the action does crank up a notch, Tony Scott isn't one to hold back, and with one-liners like "Touch me again and I'll kill ya," car chases, assassins, and explosions, action-fans really can't go wrong. If you haven't seen it in a while and you're tired of the usual, The Last Boy Scout delivers everything that made Bruce Willis a superstar with a story that respects the genres that spawned it, while emerging as something surprisingly fresh and original. On a final note, Shane Black said he suffered from clinical depression, and this movie encapsulates what that can be like even more than Lethal Weapon. Both are a testament to the fact that things can and do turn around. Just saying. More than meets the eye in this steroid-enhanced noir film.
16 people found this helpful

D. FernandezReviewed in the United States on April 24, 2020
5.0 out of 5 stars
Excellent movie!
Verified purchase
My all time favorite movie. Bruce Willis and Damon Wayans are the perfect combination of action and comedy. This movie has everything; football, comedy, some nudity, shooting, explosions, Bruce Willis, a comedic sidekick and a proper villain.
5 people found this helpful

B. L. WrayReviewed in the United States on November 4, 2015
3.0 out of 5 stars
Great movie, but film transfer is garbage
Verified purchase
I love this movie. I love all the old Bruce Willis burned out cop who saves the day flic's of the late 80's - early 90's. The only problem I have with this movie is it seems like they had a VHS copy and they transferred it up to DVD because the film noise (white specs on screen) are extremely noticeable.

So, (Bruce Willis) plays a burnt out cop who was former Secret Service who does moonlighting on the side as a Private Investigator (PI) and is given a job looking into a job protecting (Halley Berry) as she tries to get her boyfriend (Damon Wayns) job back in the NFL. Willis has to sort out his marriage, family, frame-up's, corruption, scandal's, while solving the mystery.... the only way he knows how ... John McClane style!

Seriously, this is just a good movie, the list of A-list stars in this movie nail it. Damon's character is a bit hard to like at times but it never gets cringe worthy.... If only they had a better film transfer this would be an easy 5 star rating.

RWReviewed in the United States on May 3, 2022
2.0 out of 5 stars
A troubled movie
Verified purchase
Watching this through 2022's eyes can make it cringey. Watching all the buddy cop movies made after this made me forgive it a bit. However, the plot is all over the place. Watch the movies that copied this formula instead.

Dusty Riley LyleReviewed in the United States on July 4, 2006
5.0 out of 5 stars
The Best Boy Scout
Verified purchase
This movie is the true Willis vehicle and Damon Wayans only eggs the Man on...If you're looking for Oscar material, get over it. But! if you're looking for a goodtime, then this is it. I love this movie and Bruce Willis is in true form in this flick, Wayans is awesome too. Sometimes you get tired of watching the Fat A---d Rich guy Win time and again. This Movie is about doing what's right, even if it means going about it the wrong way...you gotta do what you gotta do and Willis does, with a little help from his Friends. I was Cheering at the Explosive ending and I Love when a low life gets his. This is a non-stopper and it only lets up to let you catch your breath and then you're off again. Willis gives new meaning to getting a "light" for a cigarette and shows us that "Yes" he can dance a jig. Wanna have some fun? Wanna Cheer for the Underdog? Wanna see how a Man stands up when the chips are down or his Kid is in Danger? "The Last Boy Scout" is your ticket. Great Action Flick!
6 people found this helpful

Phil SilvermanReviewed in the United States on August 14, 2011
4.0 out of 5 stars
An anti-anti-hero movie with heart (4.5*)
Verified purchase
It's the '90s and wise cracking, worldweary detectives are going out of style. Bruce Willis is stunned to learn that his newfound buddy, disgraced Football great Damon Wayans bought a 650.00 pair of leather pants.

It's the '90s and although Football has surpassed baseball as the national pastime, the salaries and lifestyles of the athletes make it hard for the industry to keep up with its' own popularity! The answer: legalize sports betting for the whole family. Just as Vegas went "clean", so should professional *sports*. And don't worry about organized crime. They handled losing Cuba and the Nevada casinos.

Wayan's girlfriend is an exotic dancer who somehow manages to be the girlfriend of both a major football power-that-be *and* its' one-time King, Wayans. She (Hailee Berry in a rather truncated role) is gunned down. What did she know?

Willis' first best friend transfers the case: she had contacted him regarding protection as she felt unsafe. When Willis arrives home he finds the reason his "pal" doesn't have time for the new assignment. He is having an affair with Willis' wife, played well by Chelsea Field. She injects the expected, long-suffering, exasperated waiting-to-be-liberated woman element without obliterating the romantic feeling she still has only for Bruce. Stuff happens and he sees that he's in alot deeper than the 500.00 gig originally suggested.

A few explosions, mad chases, face kicks, lethal punches dispensed with and now Willis and Wayans are a team: both one-time heros, will they regain their titles?

Tight direction and a literate script keep it all going. Perhaps a healthy dose of satire may have helped in a few spots where some innocents get thrashed around but this is not a "who done it" detective story - a fun vehicle for Bruce Willis, at his fightin' weight; for Damon Wayans, more of a chance to showcase his drammatic side.
See all reviews
Back to top
Get to Know Us
Make Money with Us
Amazon Payment Products
Let Us Help You
EnglishChoose a language for shopping. United StatesChoose a country/region for shopping.
© 1996-2022, Amazon.com, Inc. or its affiliates