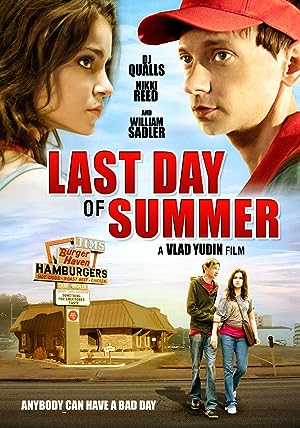 (9)5.31 h 25 min2010R
Tired of being tormented by his boss (William Sadler), Joe (DJ Qualls), a disgruntled fast food employee, finally snaps and plans revenge. But after getting rejected by Stefanie, a beautiful stranger (Nikki Reed), he decides to kidnap her instead.

Spat OktanReviewed in the United States on October 20, 2011
4.0 out of 5 stars
Better than expected!!
Verified purchase
Definitely not what I expected, but thoroughly enjoyable.

DJ Qualls is great as "Joe", the dorky loser who gets stepped on by everyone he meets. Joe decided to go out and get some revenge by buying a gun and going on a spree.

William Sadler steals the show as Joe's boss, Mr. Crolick. He's mean and hilarious at the same time. Not easy to do!

Nikki Reed does a great job being scared and vulnerable throughout the film.

The basic story - Joe gets tired of being stepped on by everyone and goes out to get a gun and get some vengeance. But things go awry, and he ends up taking a hostage by accident.

It's a low budget film, but it's very well made, well filmed, and very well acted.

And I'm not just saying that because I supplied the guns, blood, and FX for the film!

AlissaReviewed in the United States on July 9, 2015
4.0 out of 5 stars
Moving in a unique way
Verified purchase
This was a weird little movie, odd characters and strange comedy. However it is funny and the message behind it is very strong (if somewhat cliche) but the movies relates the message in a unique way. Nikki Reed's performance was great as always, DJ Qualls really made his character so realistic, and the emotional ending made the message stick. It's raw and real and hopefully you all will take from the movie what I did.

Lynn McBeeReviewed in the United States on November 3, 2012
5.0 out of 5 stars
Very different
Verified purchase
I enjoyed the unusual approach to this movie. I found it intriguing and thought provoking. Teaches a person to reconsider how we treat people we meet every day.

MylilcjReviewed in the United States on November 12, 2010
2.0 out of 5 stars
Nikki Reed was great
Verified purchase
But I hated and I mean hated the ending after seeing that it made the movie feel like a waste but certain parts of the movie did keep my laughing
One person found this helpful

William H Kemp JrReviewed in the United States on December 2, 2013
2.0 out of 5 stars
donot buy just rent
Verified purchase
just a movie that is not one to own. If you are bored and want to rent a dollar movie then go ahead.

Michaael J. ArbouetReviewed in the United States on October 27, 2010
3.0 out of 5 stars
Last Day of Summer - A nice surprise....
Joe, played expertly by the talented actor DJ Qualls and Stephanie, played by the beautiful Nikki Reed tells the story of insecure and frustrated worker at a hamburger joint who is belittled by his boss Mr. Crolick(William Sadler)to the point where Joe feels like he's at the end of his rope decides to take out his boss and the entire fast food place when a look from Stephanie stops him. Without giving too much of the story away, director Vlad Yudin's feature film debut is a decent little indie movie, worth watching.
3 people found this helpful

markjReviewed in the United States on November 19, 2010
4.0 out of 5 stars
Great Performances! Loved the film!
I was very excited to see this film. Especially because I am a huge DJ Qualls and Nikki Reed fan. I think DJ Qualls is amazing. He seemed twisted at first and the addition of Nikki Reed to the mix was brilliant.

The ending could have went in so many ways. But I am glad it ended the way it did. Truly a great film with emotional performances.
3 people found this helpful
See all reviews
Back to top
Get to Know Us
Make Money with Us
Amazon Payment Products
Let Us Help You
EnglishChoose a language for shopping. United StatesChoose a country/region for shopping.
© 1996-2021, Amazon.com, Inc. or its affiliates