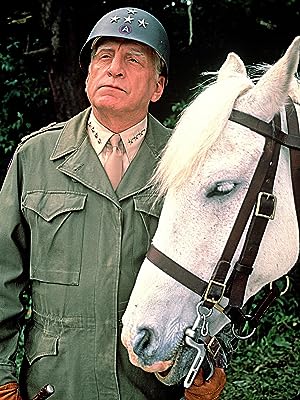 The Last Days Of Patton

(571)
6.32 h 27 min198618+
Following the close of World War II, General George S. Patton is seriously injured in a car accident and not expected to survive. "The Last Days of Patton" tells the story of these last few months of the General's life and the Army Medical Corps efforts to save him. Intermixed with flashbacks, the film also shows Patton's earlier career as a fledging tank commander during the First World War.

John H.Reviewed in the United States on June 9, 2021
4.0 out of 5 stars
Not for everyone, but still a semi classsic
Verified purchase
General George Patton was one of the most decorated Generals of World War 2. He was well known for being both tough on his own soldiers and feared by the generals and armies he faced in battle. I remember my father (who served at the end of the war) telling me that he had two fears when he was drafted into the army in late 1944. One was possibly having to be part of the invasion of Japan. The other was serving anywhere under George S. Patton. My half-brother joined the US Navy when he was just 17 (he faked a birth certificate to get in - he was actually barely 15) and he served as a carpenter's mate on a ship in the Italian campaign and later on the final invasion. He met Patton briefly when some bodies of deceased US and British soldiers were being recovered and prepared for eventual transport home. He told me that Patton was a "son-of-a-bitch" - but most of his soldiers seemed to be OK with serving under him. I think this movie was a good follow-up to the more viewed prior movie "Patton" that has become a classic. The general consensus has been that this movie tended to be boring by many viewers - because most of the time Patton is confined to his hospital bed. My experience when seeing the film is that you really feel his pain - not only physical but also due to his being reassigned to a basically meaningless job by Eisenhower and being treated as a pariah by some of the other General officers both above and below his rank. George C. Scott was one of a king - as was Patton - making you believe his pain and yet experiencing his love of both duty and his wife. Patton was quoted as saying that he would likely die the day after he left the Army if he wasn't killed on the battlefield. And that prediction was pretty much true when he was mostly reduced to being assigned to library duty.
One person found this helpful

DarbachReviewed in the United States on July 14, 2021
1.0 out of 5 stars
#@!##! Awful
Verified purchase
This was bad. Very bad. I saw the oringal Patton in a theatre way back when. This THING, the so-called "Last Day sof Patton" is a mystery. It is God awful horrible. Scott, like so many aging actors, seemed to have lost the ability to discern a good role. This is absolute tripe. Much of the fault is the writer's, but that does not get Scott off the hook: a terrible, phoned in performance. but Scott was excellent in The Changeling, just a year earlier, but hubris and resting on one's laurels went to his head in this garbage movie about Patton. I actually did FORCE myself to watch this ugh....garbage, travesty, whatever. I think Scott would flush it from his CV too, if he could. “Trains do something to me. Make me sad.” Someone actually wrote that. And Scott actually delivered those lines. However much back-and-forth rapid movement of the eyes he performs while saying these words, Scott imbues the lines with absolutely no meaning. Nothing. Again, not totally his fault as the writing establishes no meaningful context for the words. Ugh. It is hard to tell if the discomfort Murray Hamilton projects in this scene has to do with his character and the situation or with having to be in this cinematic bomb.
2 people found this helpful

Richard ZitrickReviewed in the United States on May 6, 2016
1.0 out of 5 stars
Beware......Very Poor Quality
Verified purchase
This review pertains to the video quality of the DVD-R. It is terrible. There's an expression used in the computer programming trade known as "garbage in, garbage out". That expression certainly applies to this DVD. It appears that the source used to produce this DVD was created by using a VCR to record the television broadcast. That tape was then burned to a DVD-R and sold to the Amazon customer. There's a note on the Amazon page for this DVD that says something about how DVD-R's are created for Amazon, but nothing about the actual quality of the DVD. Seems to me, the fact that this is not a studio-produced DVD should be stated in large, bold, make-no-mistake-about-it language. After all, long-time customers of Amazon, among which I am to be counted, have come to expect more from our favorite retailer. For you Amazon Prime members, if you think I'm exaggerating, check out a few minutes of the movie online. That's the same quality that you'll get when you purchase this DVD.
27 people found this helpful

Grey DogReviewed in the United States on June 27, 2021
5.0 out of 5 stars
Watching someone you love die
Verified purchase
Two movies. One on Patton and politics post-war. The other about accompanying. These comments are about the second.

Could the second use editing? Maybe. But watching someone you love die is a slow process. An inch-by-inch process. With digital access, we can now watch the long ones in half-hour increments anyway. Is it a great movie? No. Is it worth seeing for those of us initiated in the death watch? Most def. 5 stars. It is like an art house film on a serious existential topic, like Javier Bardem's "The Diving Bell and the Butterfly." It has nothing to do with war and warriors other than in the sense every face you meet is in a war every day. The people who would most related to this will probably never come across it.

Mark D. SalisburyReviewed in the United States on May 16, 2016
2.0 out of 5 stars
Don't expect "Patton II", but worth watching.
Verified purchase
This is not "Patton II", so don't come into it expecting exciting battle scenes. It appears to originally been a Made for TV movie following Patton's time as the Military Governor of Bavaria, bumping heads with politicians who wanted to punish the Nazi's while he was wanting to use the civilians to rebuild Bavaria. Set the German prisoners to chopping wood for the winter for example. Covers parts of his early life and career as a series of flash-backs. About half-way through the movie he has his accident, and you get to see what a talented actor George C. Scott really was, as he is confined to a hospital bed and can only express emotion using his face and his voice. Many of the actors from PATTON reprise their roles. Giving it only 2 stars because of the poor video quality -- it looks like a VHS tape someone made taping it off their home VCR. Grainy, jumps in scenes (like someone paused the recording during a commercial). Story and acting gets 4 Stars, Video Quality gets 2 Stars.
4 people found this helpful

McNeilReviewed in the United States on September 10, 2021
3.0 out of 5 stars
Interesting story, uninspired acting, awful film quality
Verified purchase
This did not feel like a direct sequel to the fantastic 'Patton', even though it technically was. This was more of a made-for-tv docudrama. There was essentially no action whatsoever. I enjoy George C. Scott, but he didn't seem very enthusiastic about this role. Still, it's worth a watch if you're interested in Patton's story.

One thing of note is that the movie appears to have been filmed on a potato. The image quality was as poor as anything I've ever seen. After a while I didn't find it too distracting, but it was clearly a copy of a copy of a copy.

Amazon CustomerReviewed in the United States on January 14, 2021
5.0 out of 5 stars
Eisenhower always was a kind of a buffoon and in a way he destroyed Europe.
Verified purchase
Patton could have saved the world in style and wonder.

All that subsequent post WWII communist aggression that has since crippled the West, and been amplified by the other one that gave us this plague, all of it, the Berlin Wall, all those grinding decades of "what crap are they pulling this week" cold war.

Our world might have rescued the future if not for Stalin and their expansionist pathology. Even Vietnam could have been won without firing a shot.

For this opportunity to have been rebuffed was a kind of crime against humanity by Eisenhower and doomed Europe to it's current officially imminent doom.

Darrick MillsReviewed in the United States on July 15, 2021
4.0 out of 5 stars
Great movie! Poor film quality...
Verified purchase
This was a great sequel to the first film, beautiful follow up.

They kept the same actor for Patton so it just feels perfect where they pick up after the first film. Solid story, great details, good actors. The only issue I have, and why I gave it 4 stars instead of 5, the film quality is awful!! Its so grainy and out of focus, its like someone took a bad worn out VHS tape and the used a hand held video camera to record what was playing on the TV.

Great movie, but mercy, couldnt you find a better quality version to post??
See all reviews
Back to top
Get to Know Us
Make Money with Us
Amazon Payment Products
Let Us Help You
EnglishChoose a language for shopping. United StatesChoose a country/region for shopping.
© 1996-2022, Amazon.com, Inc. or its affiliates