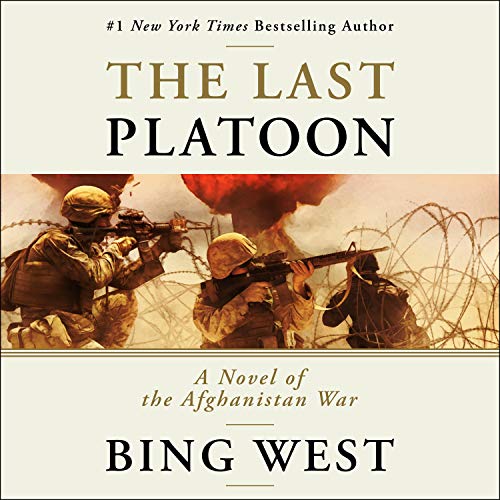 The Last Platoon: A Novel of the Afghanistan War

Bing West (Author), Stephen Graybill (Narrator), HighBridge, a division of Recorded Books (Publisher) & 0 more
4.7 out of 5 stars 249 ratings
See all formats and editions
Sorry, there was a problem loading this page. Try again.

A platoon of Marines and CIA operatives clash in a fight to the death with the drug lords and the Taliban, while in Washington, the president seeks a way out.

This authentic war story vividly displays how a warrior must replenish his own moral courage and not allow ambition to coarsen his sense of decency.

The Last Platoon explores firefights expertly told by a combat veteran. Listeners will feel like they have entered a strange, alien world as they hear, in great detail, how the Marines and Taliban clash, circle each other, probe for weakness, and clash again in primordial violence, neither side yielding. While intrigue and deceit play out at the higher levels, in Afghanistan's bright poppy fields only the killing instinct will decide the winner.

4.7 out of 5 stars
4.7 out of 5
249 global ratings
How are ratings calculated?
To calculate the overall star rating and percentage breakdown by star, we don’t use a simple average. Instead, our system considers things like how recent a review is and if the reviewer bought the item on Amazon. It also analyzes reviews to verify trustworthiness.

Amazon Customer
5.0 out of 5 stars A Must Read for political and military leaders ....and all Americans.
Reviewed in the United States on December 16, 2020
Verified Purchase
This is an outstanding novel of present day combat as fought by American forces. I was a Marine grunt in Vietnam and, while the terrain in the novel is different, the courage and grit of Bing West’s Marines seem timeless and very real. I read Mr. West’s non-fiction best-seller covering the actions of a Marine platoon in southern Afghanistan, “One Million Steps”. The cast of characters in this novel, The Last Platoon, speak and act much like those he went on patrol with, and profiled, in that memorable real-life account of life as a Marine infantryman in the poppy fields fighting the Taliban. “The Last Platoon” is a must read....particularly for politicians, military leaders and anybody who wants to make sense of America’s involvement in the Middle East.

FJD
5.0 out of 5 stars Guts and Glory Delivered
Reviewed in the United States on January 18, 2021
Verified Purchase
Bing West delivers a week to remember with 'The Last Platoon', the tale of a mission in Afghanistan driven by political self-interest, ambition, conflicting goals and ultimately the determination, grit, loyalty and self-sacrifice of the Marines on the front line left to execute. Mr West brings his decades of experience from the front lines in Viet Nam, Iraq and Afghanistan to the E-Ring of the Pentagon to deliver a gripping tale of how mission success can somehow be accomplished even with the conflicting goals of all those involved. More than anything else this is a tribute to the commitment and single minded determination by the grunts in the field undeterred by the confusion and conflicting motives of those up and down the line.
Read more
One person found this helpful
Helpful
Report abuse

Paul Hurley
5.0 out of 5 stars Great read especially if you have been in the military!
Reviewed in the United States on December 16, 2020
Verified Purchase
The cast of characters provides the good the bad and the ugly in the military and combat.
The life changing events take place over an intense short period of time and leave you exhausted at the end.
If you have read Mr West's earlier books you will recognize some of the characters.
If you haven't read them, this will make you want more.
Outstanding Read!
PH Captain. USMC 65-69
Read more
4 people found this helpful
Helpful
Report abuse

Kindle Customer
5.0 out of 5 stars Fiction that is great instruction
Reviewed in the United States on February 17, 2021
Verified Purchase
The store is fairly simple almost cliche concept of a soldier on his final duty before a new stage in his life. But this story was painted with so much detail and color, it made it a far more compelling story than this simple premise suggests. I must admit, that not being military and with so many characters, acronyms, and factions with the book, sometimes I was a little distracted and somewhat confused about what was going on in the story. But what was really well executed was providing the Dynamo c the f what was going on the ground in Afghanistan. The political, economic, and social structure that makes thus war so difficult to see victory, defeat, and exodus as any true outcome.
Read more
Helpful
Report abuse

F. W. Rustmann Jr.
5.0 out of 5 stars Required Reading
Reviewed in the United States on January 3, 2021
Verified Purchase
I just completed reading The Last Platoon and I thoroughly enjoyed it. It is not only an exciting novel with great characters and an excellent plot, but it is a reflection of todays Marine Corps and how it has evolved over the years. Bing describes every level of the forces that come together to fight our battles in foreign lands. From the Marine grunt on the line, to the officers with their petty conflicts of gaining promotions, through the brass at the Pentagon and all the way to the White House actors with their political aspirations. Bing knows them all because he has served at all these levels. This book is indeed required reading for anyone interested in learning more about today's Marine Corps and the forces behind them - the good, the bad, and the ugly... Well done Bing.
Read more
One person found this helpful
Helpful
Report abuse

A A Monroe
5.0 out of 5 stars Afghanistan war: small unit combat & political intrigue
Reviewed in the United States on December 29, 2020
Verified Purchase
.This is a spellbinding book about the war in Afghanistan. But it tells a story and conveys a message that could have been set in a different war at a different time. It very vividly encapsulates the violent and often poignant details of small unit combat and the not uncommon dysfunctional interactions on the battlefield among those in different levels of command. And it includes a very interesting political sub plot. All this in an exciting, very readable, fast paced novel. Which you should know was written by a Marine who has been on more combat patrols than anyone in the history of the Marine Corps. I am a long time Bing West fan (I have all his books). And, as a former Marine Corps infantry officer who led many combat patrols in Vietnam, I very highly recommend this book. And I predict it's headed for the best seller lists and ultimately a blockbuster movie. Don't miss this one!

KY in NJ
5.0 out of 5 stars Terrific, clear look at ground reality for troops in the Afghanistan conflict.
Reviewed in the United States on January 26, 2021
Verified Purchase
Fascinating inside view of combat in Afghanistan for our troops. The diarist’s review of ground reality is eye opening. You can feel the intensity of the experience. The writing is simple and clear. I liked this so much I have searched out his other works. He applies his own experience to the current experience of ground troops now. Recommend.
Read more
One person found this helpful
Helpful
Report abuse

Charles A. Krohn
5.0 out of 5 stars Warriors are different
Reviewed in the United States on December 18, 2020
Verified Purchase
This story is as much fact as fiction. Anyone who has been there will recognize the characters, almost universal descriptions of men at war.
Read more
2 people found this helpful
Helpful
Report abuse
See all reviews
Back to top
Get to Know Us
Make Money with Us
Amazon Payment Products
Let Us Help You
EnglishChoose a language for shopping. United StatesChoose a country/region for shopping.
© 1996-2022, Amazon.com, Inc. or its affiliates