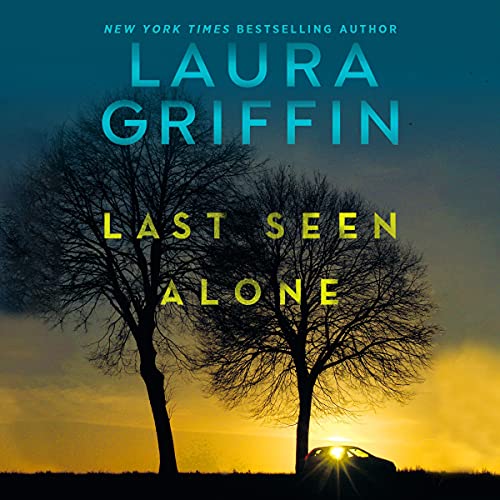 Up-and-coming attorney Leigh Larson fights for victims of sexual extortion, harassment, and online abuse. Unafraid to go after the sleaziest targets to get payback for her clients, she’s laser-focused on her career — to the exclusion of everything else — until a seemingly routine case and a determined cop turn her world upside down.

Austin homicide detective Brandon Reynolds is no stranger to midnight callouts. But when he gets summoned to an abandoned car on a desolate road, he quickly realizes he's dealing with an unusual crime scene. A pool of blood in the nearby woods suggests a brutal homicide. But where is the victim? The vehicle is registered to 26-year-old Vanessa Adams, but all he finds in his search of the car is a smear of blood and a business card for Leigh Larson, attorney-at-law.

Vanessa had hired Leigh just before her disappearance, but Leigh has no leads on who could have wanted her dead. Faced with bewildering evidence and shocking twists, Leigh and Brandon must work together against the clock to chase down a ruthless criminal who is out for vengeance.

TrishJ
5.0 out of 5 stars Another great book from my favorite author!
Reviewed in the United States on September 28, 2021
Verified Purchase
Last Seen Alone is the newest book in the Texas Murder Files series by Laura Griffin. This book is easily read as a stand alone. There is usually a character connected to previous books, but it is not necessary to read previous books to try and catch up.

The book starts with a bang with the disappearance of Vanessa. She meets with someone and is given something in a bag in exchange for money. She stops on the side of the road to check her bag but gets out of her car and runs when she sees a car stop behind her. She is chased into the woods by someone. Her fear is intense.

When Detective Brandon Reynolds is called to investigate an abandoned vehicle, he and his partner discover Vanessa has vanished. Her purse, phone and keys are all left in the car. There is blood on the car door and they find more blood in the woods. They aren't sure if this is a missing person case or a murder case. The only clue left behind is a business card for an attorney named Leigh Larson. Brandon and his partner track her down on her way to court. Detective Reynolds and Leigh don’t start off on the right foot. She is in a hurry for court and he wants answers now. Of course Leigh doesn’t tell him anything. She vaguely remembers Vanessa coming to see her once, but suspects Vanessa didn’t tell her the full story. Leigh deals with women who have been victims of revenge porn and sexual harassment. She has her own reasons for seeking justice for her clients and wants to find Vanessa.

Brandon and Leigh are constantly being thrown together with this case. For every step forward that Brandon makes, Leigh seems to be involved in some way. The mystery involving Vanessa and the give and take between Brandon and Leigh make this a great read. Ms. Griffin has once again told a story that involves real life situations. Her attention to detail makes this an extremely intense story.

Last Seen Alone is a fantastic book. The mystery surrounding the disappearance of Vanessa was page turning. I was up way too late in the night finishing this book. The characters are believable and the suspense is engaging. The supporting characters were just as interesting as the main characters and I hope they their own story.

Ms. Griffin is on my auto-buy list, and I eagerly look forward to each new book. I have read all of her books and thoroughly enjoyed each one. She writes fantastic characters, unbelievable suspense and creates a world I can become immersed in. I highly recommend this new book.
Read more
5 people found this helpful
Helpful
Report abuse

jwreinhold
5.0 out of 5 stars Totally thrilling!
Reviewed in the United States on September 28, 2021
Verified Purchase
Laura Griffin is one of my "go-to" authors when I am looking for a good, well-written, Romantic Suspense novel. Her characters are always fleshed out and well-rounded and the chemistry between the characters is always well developed without being over the top. The story plot is always new and exciting and full of twists and Last Seen Alone is no exception!
In Last Seen Alone, the story revolves around a young woman's disappearance that has Auston PD homicide detective Brandon Reynolds investigating a possible murder but without a body, he is fighting an uphill battle.
Defense attorney Leigh Larson is the one person that might have some answers but because of her relationship with the young woman gets mired in the investigation to the point of making herself a target.
This story is intense with the real-world issues faced today by many women of stalking and revenge when relationships fail.
I truly enjoyed this book and the characters and can't wait for more of Laura's stories!
Read more
5 people found this helpful
Helpful
Report abuse

Kindle Customer
3.0 out of 5 stars Me
Reviewed in the United States on October 2, 2021
Verified Purchase
J: This seemed more about budding romances than the crime drama that I thought it would be. There's quite a bit of questioning this person and that one, a little suspense here and there but then it slows down to a lot of new relationship drama. And a shallow plot. I am more than half way and realizing I bought the wrong book.
Read more
4 people found this helpful
Helpful
Report abuse

Jan Fore
4.0 out of 5 stars Griffin's Latest Suspense
Reviewed in the United States on October 27, 2021
Verified Purchase
Laura Griffin once again gives us a terrific piece of suspense in her latest novel , Last Seen Alone. Texas detectives are at the seen of a crime they believe happened to Vanessa Adams. With blood found in the wooded area they feel it is only a matter of time before her body is found. She left her car and belonging along side of the road and appeared to have vanished in the wilderness.
Her third in the Texas crime mysteries was another great read.
Read more
2 people found this helpful
Helpful
Report abuse

A good storyline, with some romance that doesn’t take away from the plot.
Read more
Helpful
Report abuse

Jaime Reynolds
4.0 out of 5 stars another terrific read
Reviewed in the United States on October 4, 2021
Verified Purchase
This story started with a bang and made you want to read more. I will say it tapered off for me about halfway through, and then she hits you with the unexpected and you are right back in. It’s suspense and mystery, mixed with some romance. Grab this one. It will not disappoint.
Read more
One person found this helpful
Helpful
Report abuse

Brenna Nance
4.0 out of 5 stars Mostly Good
Reviewed in the United States on April 2, 2022
Verified Purchase
I liked the characters and the romance. I liked that all the main characters had a story.
The only thing I did not like bbn is that the secrets and lies of omission only served to make the book's mystery keep going. If everyone had been hi est and forthcoming the mystery would have been solved. I guess that is human nature bit it did cause a few eye rolls. I liked how it all came together in the end.
Read more
Helpful
Report abuse
See all reviews

Maz
3.0 out of 5 stars Disappointing
Reviewed in the United Kingdom on March 25, 2022
Verified Purchase
This was an ok read. First time I'd read a book by this author. The lead female was annoying and her actions weren't making sense. In fact the whole thing was unrealistic! The lead characters relationship seemed a bit contrived.
As i said, an ok read, but don't think I'll read anymore from this author.
Read more
Report abuse

Mrs. S. A. Lynch
5.0 out of 5 stars Thoroughly enjoyable read.
Reviewed in the United Kingdom on October 19, 2021
Verified Purchase
I am a fan of Laura Griffin and have read many of her books. This story is well up to her usual standard, and I highly recommend it for fans of suspense novels.
Read more
Report abuse

Elizabeth Cullen
4.0 out of 5 stars Good read
Reviewed in the United Kingdom on November 11, 2021
Verified Purchase
Another good book by Laura Griffin. Characters always seem to draw you in. Twisty thriller and enjoyable story. Another winner.
Read more
Report abuse

Sue P
5.0 out of 5 stars Superb!
Reviewed in Canada on March 9, 2022
Verified Purchase
I liked the maturity of the characters. I liked watching them learn about each other! The suspenseful main story line was intriguing and surprising.
Read more
Report abuse

Faye
5.0 out of 5 stars Great Book
Reviewed in Canada on February 17, 2022
Verified Purchase
The book was an easy read and kept me engaged throughout. Nice to read by the fireplace on a cold winter evening.
Read more
Report abuse
See all reviews