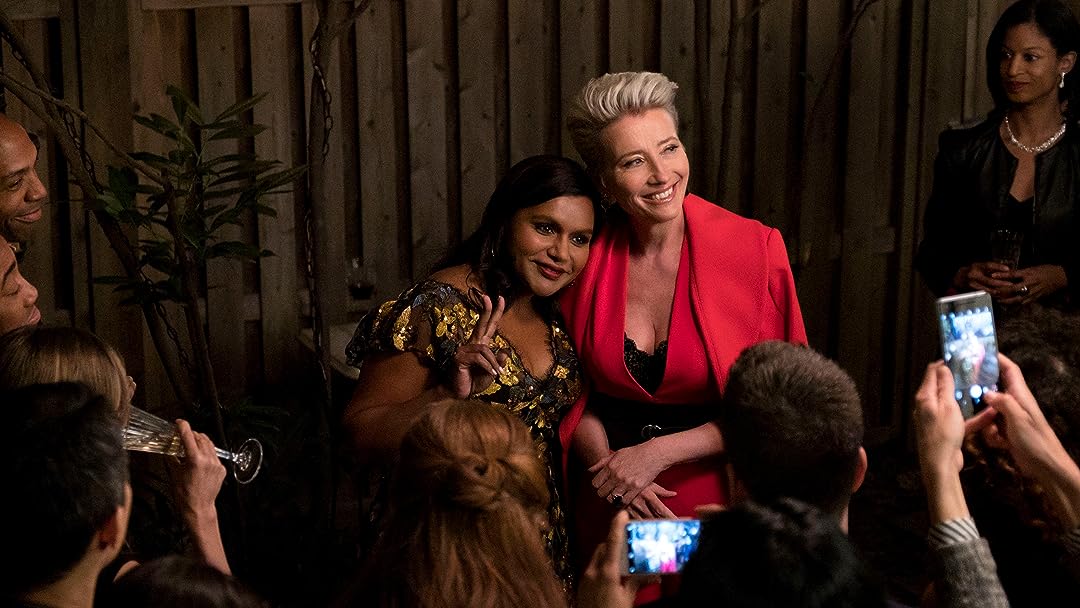 (3,655)
6.51 h 42 min2019X-RayHDRUHDR
Included with Prime. After almost 30 years, a groundbreaking talk-show host (Emma Thompson) suspects she may soon be losing her coveted seat on late-night television unless she manages a game-changing transformation in Late Night, the first feature film from Emmy-nominated writer and producer Mindy Kaling.

Paul AllaerReviewed in the United States on August 21, 2019
4.0 out of 5 stars
Intelligent and smart comedy: "A little too old and a little too white"
"Late Night" (2019 release; 102 min.) brings the story of Katherine Newbury, host since 1991 of Tonight, a "the Tonight Show"-like talk show. As the movie opens, Newbury is introduced at an awards show for her umpteenth award. Then one day, one of her (all-male) writing staff asks for a raise and Newbury, incensed, fires him. Once again Newbury is pressed to diversify her staff, and in a flash Indian-American Molly Patel, who has zero TV writing experience, is hired... At this point we are 10 min. into the movie, but to tell you more of the plot would spoil your viewing experience, you'll just have to see for yourself how it all plays out.

Couple of comments: this movie is directed by up-and-coming Indian-Canadian actress/director Nisha Ganatra and, more importantly, written by Mindy "The Mindy Project" Kaling, who also stars as Molly. The movie is very much self-aware, as it explores many hot buttons in today's society (the "diversity hire", being a woman in men-dominated fields, etc.) but it never does so in a preachy manner. In fact, I might even say that the movie goes the other direction altogether, with plenty of charm and positivity. The movie benefits tremendously from the easy interplay between Emma Thompson (as Newbury) and Kaling. In fact this may be a career-defining role for Emma Thompson, who is utterly brilliant as the aging and self-aware talk show host. Check out for an almost unrecognizable Amy Ryan (as Newbury's boss). John Lithgow makes the most of his smallish role as Newbury's life partner who suffers from Parkinson's. At some point Molly concludes that Newbury is "a little too old and a little too white", much to Newbury's immediate and loud chagrin, but you also feel confident that things will work out alright somehow. When the houselights came back on, I was astonished to see how quickly time had flown by during this movie. And that's always a good sign.

"Late Night" premiered at this year's Sundance film festival to great acclaim, and Amazon snapped up the US distribution right (for a record $13 mill. I might add). The movie went wide in June, and the opening weekend Sunday early evening screening where I saw this at here in Cincinnati was PACKED, sold out down to the last seat. In this summer of never-ending dumber-and-dumb sequels, prequels, and franchises, "Late Night" feels like a breath of fresh air. If you like a good comedy that is intelligent and smart, I'd readily suggest you check this out, be it in the theater (unlikely at this point), on Amazon Instant Video, or eventually on DVD/Blu-ray, and draw your own conclusion.

Michelle RickenReviewed in the United States on September 6, 2019
1.0 out of 5 stars
PC overload
Verified purchase
PC lecture masquerading as a comedy. Too bad it's just not funny.
438 people found this helpful

john taylorReviewed in the United States on September 7, 2019
1.0 out of 5 stars
made for the left .
Verified purchase
Another self serving political soapbox pretending to be a comedy .
359 people found this helpful

Elizabeth ThomasReviewed in the United States on September 6, 2019
3.0 out of 5 stars
ANOTHER film about a brown person helping a white person stay on top?
Verified purchase
Very well done! Fun watching a transformation of an older person becoming relevant to a younger audience instead of the tragedy of a decline. Instead of crying and dying, the main character cries and flies. It was fun to watch, and Mindy Kaling is always a pleasure...Emma Thompson is, as always, EXCELLENT.

However, Come on...NEW NARRATIVE PLEASE! I am feeling this film as far as being culturally relevant, modern, pretty, fashionable, realistic, emotional and yes - cathartic. However, if this film came out on DVD, I would have to add it to my shelf full of films like The Legend of Bagger Vance, The Help, Bringing Down the House, Hitch, Sister Act, The Matrix, Rocky, The Green Mile, Changing Places, Get Hard and so many others where brown skinned people help white people "find themselves," "improve," or simply stay on top. Listen. I love white people. I love all people. But I would love to see something new come out of Hollywood...whether it's Amazon hollywood, Netflix hollywood, Pureflix hollywood, Sundance Film hollywood, or traditional hollywood. For the love of changing culture for the better - UGH.
316 people found this helpful

zuzuclueReviewed in the United States on September 6, 2019
1.0 out of 5 stars
Boring
Verified purchase
As much as I love Emma Thompson and wanted to like this movie, I found myself surfing the web as I listened to it and waited for it to get better. It never did. It moves at a glacial pace, it is always trite and predictable, and never funny.
336 people found this helpful

KMovieLoverReviewed in the United States on September 7, 2019
1.0 out of 5 stars
Virtue signalling for intellectuals, feminists and social justice warriors
Verified purchase
Before I even started watching this I knew I was going to hate it because of the cast, but then I sort of liked it for the first 3/4 of it, but then it totally fell off a cliff into a quagmire of self aggrandizing drivel for the last 30 minutes, which was trite beyond words. SPOILER BEYOND HERE: It was particularly revealing that the entire show was about females complaining about how "nothing is ever fair for females", but then the female is cheered and lauded for her infidelity when it's been proven that men get slaughtered and ostracized for the same behavior. And yes, I know that I'm "taking the bait" when I say that I don't really care about such things anyways, but it's so blatantly hypocritically that I just had to mention it. Not that anyone is ever going to read my dumb review among all the other dumb reviews about a dumb show. Anyways, Amazon Originals are always hit-and-miss and this is definitely a miss and it still holds true that anything with Mindy in it is lame despite her always being somewhat sweet and endearing.
284 people found this helpful

TFPReviewed in the United States on September 7, 2019
1.0 out of 5 stars
Predictable and Preachy
Verified purchase
Not very well-written. None of the characters were particularly likable or interesting. And in a country where people of every color have found great success, the racial soapbox is tiresome.
251 people found this helpful

JPM NVReviewed in the United States on September 6, 2019
5.0 out of 5 stars
There's something about the 'Late Night.'
Verified purchase
Whitty, Funny, Intelligent.... "no tell me what you really think."

This movie had a comedic charm that put a smile on my face from poking fun at stereotypes to busting through walls of politically correct speech. It was upfront, nasty and terrible but for all the right reasons when it comes to taking today's rough world and giving a bit of fresh air in places that are boxed in. This movie took a corner of our society's media, the late night comedy scene, and poked holes throughout it. First off, do we have a late night comedy queen? No. We almost did but damn that was quite a move by a certain network. Mindy wrote wonderful characters who have filled that void we desperately needed right in front of our faces. She wrote in the hard choices one has to make when chasing dreams, struggles that come with life as we chase our dreams and, lastly, the fight we have to find in ourselves to not let go of those dreams.

In 2006, there was a movie called "The Devil Wears Prada." Meryl and Anne were wonderful in that portrayal; however, we have 2019 now with Mindy and Emma with authentic original writing fit for everyone to aspire to.
81 people found this helpful
See all reviews
Back to top
Get to Know Us
Make Money with Us
Amazon Payment Products
Let Us Help You
EnglishChoose a language for shopping. United StatesChoose a country/region for shopping.
© 1996-2022, Amazon.com, Inc. or its affiliates