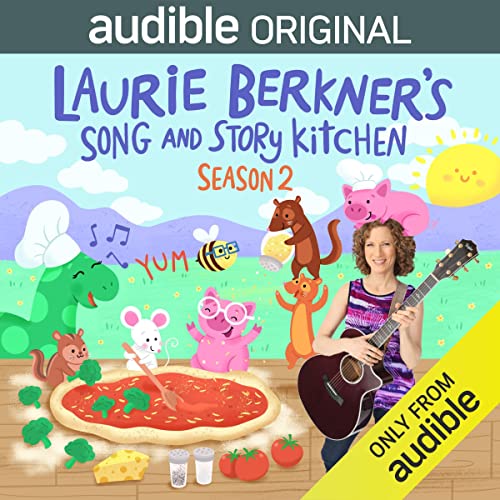 In the second installment of Laurie Berkner’s Song and Story Kitchen, young listeners ages four to eight can join Laurie with her buddies Thelonious and Rosetta Pig, as she whips up yummy food, songs, and stories, helping young listeners work through some of life’s challenges. Each chapter of this delightful Audible Original features a different recipe and tells a new story set in the magical world of Juniper Fields with Laurie's friends: Newcomer Harry Munkin the chipmunk, and old friends Oscar Beebee the bumblebee, Layla Meeska the mouse, Tallulah Jones the dinosaur, and ferret cousins Victor Vito and Freddie Vasco.

Featuring new original music, and some of the Laurie Berkner Band’s greatest hits, with Susie Lampert on keyboard, Bob Golden on drums and percussion, Brady Rymer on bass, and several special guest musicians.

For recipes, please visit The Laurie Berkner Band on Pinterest.

Enjoy this audiobook free + more
Learn more about Membership
List Price: $29.95
You Save: $3.74 (12%)
By completing your purchase, you agree to Audible’s Conditions Of Use
Sold and delivered by Audible, an Amazon company

aroundtown
5.0 out of 5 stars Best preschool listening experience
Reviewed in the United States on March 19, 2022
It’s even better than season 1, we devoured it. We will be re-listening over and over (and yes, even the adults love it)! This needs to be in every preschooler’s rotation.
Read more
Helpful
Report abuse

Andrea S
5.0 out of 5 stars Love this series!
Reviewed in the United States on June 21, 2022
Our family loves listening to the Song and Story Kitchen. This season was just as good if not better than last season. It is entertaining and as a bonus, this has really gotten my son interested in learning how to cook so we make sure to look up the recipes to make together as well. We can’t wait for season 3!
Read more
Helpful
Report abuse
See all reviews