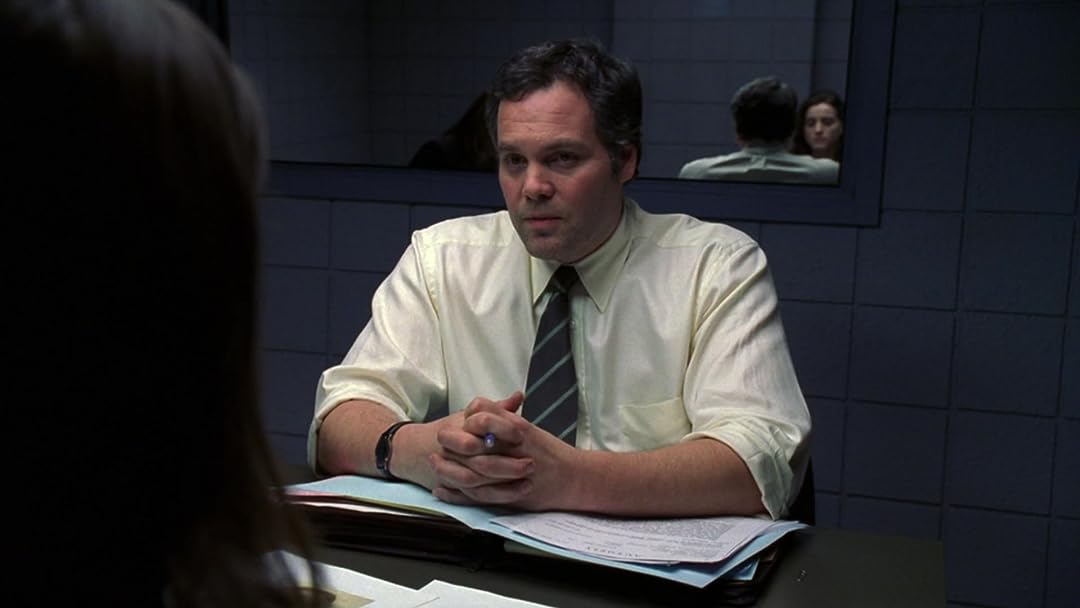 BLACKCATReviewed in the United States on March 1, 2021
5.0 out of 5 stars
Love This Show
Verified purchase
Out of all of the Law & Orders spin-offs this is my favorite. The quirkiness of Goren and the seriousness of Eames really mold well as they solve crimes. They really have great chemistry. Of course I can't leave out DA Carver he's tough, but fair (sometimes) but he really rounds out the three stars and they make it work. I am on the 3rd marathon of this show. I just love it.
2 people found this helpful

Boston ReaderReviewed in the United States on May 3, 2013
5.0 out of 5 stars
Enter The Mind of Robert Goren... And the Killer
Verified purchase
This show debuted around the same time as the September 11th attacks and was dedicated to the first responders who responded to the attacks. You'll see the police wearing a black tripe over their badge as tribute to their fallen fellow officers. This show follows a separate formula than Law & Order and a is way different than Special Victims Unit. Here you catch a glimpse of what the suspect and in most cases, what the victim was going through leading up to their murder or kidnapping or orchestrated death. Then you see Major Case Squad's Detectives Robert Goren and his senior partner Alex Eames as they try to catch the killer(s). When watching Goren, you feel like you're watching the love child of Sherlock Holmes and Lt. Columbo as you see him find clues and inconsistencies and character traits that we, the audience vaguely notice. This season has episodes going from Eastern European kidnappers to a greedy secretive businessman. A corrupt school cop to a band of diamond thieves. Also Diane Wiest, Jerry Orbach, Jesse L. Martin and S. Epatha Merkerson guest star as their Law & Order characters. So this is not only a must have for every Criminal Intent fan, but every fan of Law & Order and the franchise as well.
18 people found this helpful

HMS WarspiteReviewed in the United States on January 18, 2016
5.0 out of 5 stars
"Yesterday"
Verified purchase
New York City Detectives Goren and Eames pick up responsibility for a new case when the mutilated and partially preserved corpse of a young woman is discovered. Just to complicate the investigation, the young woman has been dead twenty years, and her original unsolved disappearance was investigated by their boss, Captain Deakins, who still has a file on the most likely suspect. Goren and Eames will determine the corpse was originally buried under a family home, opening up a new pool of suspects, one of whom may be a serial killer. The two detectives will find themselves in a psychological battle of wits with a murderous control freak.

"Yesterday" is a great episode from the first season of "Law and Order: Criminal Intent". Goren and Eames are still working out their relationship, and Goren is already showing signs of the willingness to buck procedure that will keep him constantly in trouble with the brass. He will, for example, solve the problem of entrance into a possible crime scene by just kicking in a door, after a quick glance around. This episode and the First Season are highly recommended.

Juan C. FernandezReviewed in the United States on June 22, 2015
5.0 out of 5 stars
It is far and away one of the best series ever made
Verified purchase
It is far and away one of the best series ever made. For some reason, you could tell they were really trying to make it work (not so much so toward the end of the series). There was a lot of interesting interplay between characters and I really love the way they get into the psychology of the subjects involved as well as the state of mind of the detectives. They seemed to get the point across that Detectives (especially in New York City), are in fact highly intelligent, well educated individuals who will stop at virtually nothing to get at the heart of the truth of the matter and with some professionalism. Also, the show had everything including one vital thing, a "sexy" quality, if you will - which for me was translated by Kathryn Erbe and some really good and interesting camera angles, camera work. It was fun to watch her finally bring some scumbag to justice with the use of her sidearm, also proving, that women CAN do the job, contrary to what some idiots might believe. Some great work, I thought.
8 people found this helpful

M. D. FlackReviewed in the United States on February 17, 2014
5.0 out of 5 stars
Great cases with interesting personalities
Verified purchase
Great first season with interesting cases, some fantastic and some ripped from the headlines at the time.It's interesting to watch Goren and Eames evolve and the banter with DA Carver ( Courtney Cox ) behind the "courthouse scenes" I was sorry when this series went off the air yet delighted that they brought back Vincent D'Onofrio ( Goren ) and Kathleen Erbe (Eames) for one final series of showdowns with the bad guys and then "off into the sunset" together//possibly..anyway, the first season is mostly hard hitting police drama-watching the complicated mind of Goren figure out puzzles like a modern day Columbo, while Eames comes slowly to respect, admire and eventually bond in friendship with her partner, while she goes about catching the suspects with old fashioned hard hitting detective work. My only complaint is with the series as a whole but it already begins in season one...the reuse of actors. Everyone who is a follower of this show knows that the station will receive a new captain later in the show, but the actor was a hit man , and a very noticeable one at that, that Goren and Eames had busted earlier in the series. Susan Misner is another guest actress...very good, mind you, but she keeps popping up as completely different characters through out the series.
5 people found this helpful

FlashReviewed in the United States on July 21, 2009
5.0 out of 5 stars
Crime Solvers Delight!
Verified purchase
The Law & Order series never really appealed to me that much. My only experience with it was the few crossover episodes with Homicide: Life on the Street. I didn't much care for the L&O characters or the concept of half a show in the courtroom. But when I was looking for a new series to watch, Criminal Intent caught my eye and I purchased it. I have been more than pleasantly rewarded!

The first ten minutes or so of each Criminal Intent episode shows the crime (or at least part of it) and the rest of the show is the solving of the crime (usually with a couple surprises or turns you don't expect). The formula works well. Vincent D'Onofrio does an outstanding job playing Detective Robert Goren. His style is a unique blend of quirky intuitiveness, perp manipulation and energy. And many of the interrogation scenes are almost as good as in Homicide: Life on the Street. Then there's Kathryn Erbe (as his sidekick Alex Eames) and IMO she is very very nice to look at. Put it together for 22 episodes and you have a really good TV show. I've already started watching season 2.

A readerReviewed in the United States on September 17, 2013
4.0 out of 5 stars
It's the characters more than the plots
Verified purchase
First rate acting all around. Vincent D'Onofrio as Goren is fascinating to watch, and here, in the first season, is quite possibly the sexiest man (then) alive tho as the series progresses both actor and character undergo some sad changes.
I'd never seen the series at all when it aired, but this summer I caught a few episodes on cable and really got hooked. The episode plots throughout the 10 year run are occasionally sharp but more often unduly complicated and weird, even sorta Gothic, with a lot of Psychology 101 -- mommy or daddy didn't love them enough and so they serial kill -- but... never mind; they hold your interest, the lead characters are compelling, and even minor parts are extremely well-acted. If you're really into film, you'll also appreciate things like the lighting and the camera direction. So: recommended.
6 people found this helpful

K. GrovesReviewed in the United States on July 27, 2008
5.0 out of 5 stars
A Realistic, Compelling Symphony of Law and Human Nature
Verified purchase
Simple put, this is an amazing series. I never got caught up in the original Law and Order but Law and Order: Criminal Intent hits the bullseye for a variety of reasons. First, Goren is an amazing mix of a compassionate Sherlock Holmes and a stoic James Bond with a flare for all but breaking the rules to catch criminals but not being burdened with any significant vices. Goren doesn't smoke or drink to excess and has no romantic relationships outside of work that viewers are aware of from what I have seen. Eames is the cynical and skeptical partner who is often wary of Goren's methods. She is not in awe of his extensive knowledge of languages and criminal psychology but she is more than willing to follow his unrelenting bloodhound tendencies when he catches a scent. I'm having a ball watching this series develop and Dick Wolf is a genius. I highly recommend this series for anyone tired of the 'Walker, Texas Ranger' style of law enforcement and wanting to see something far more down to earth.
3 people found this helpful
See all reviews
Back to top
Get to Know Us
Make Money with Us
Amazon Payment Products
Let Us Help You
EnglishChoose a language for shopping. United StatesChoose a country/region for shopping.
© 1996-2022, Amazon.com, Inc. or its affiliates