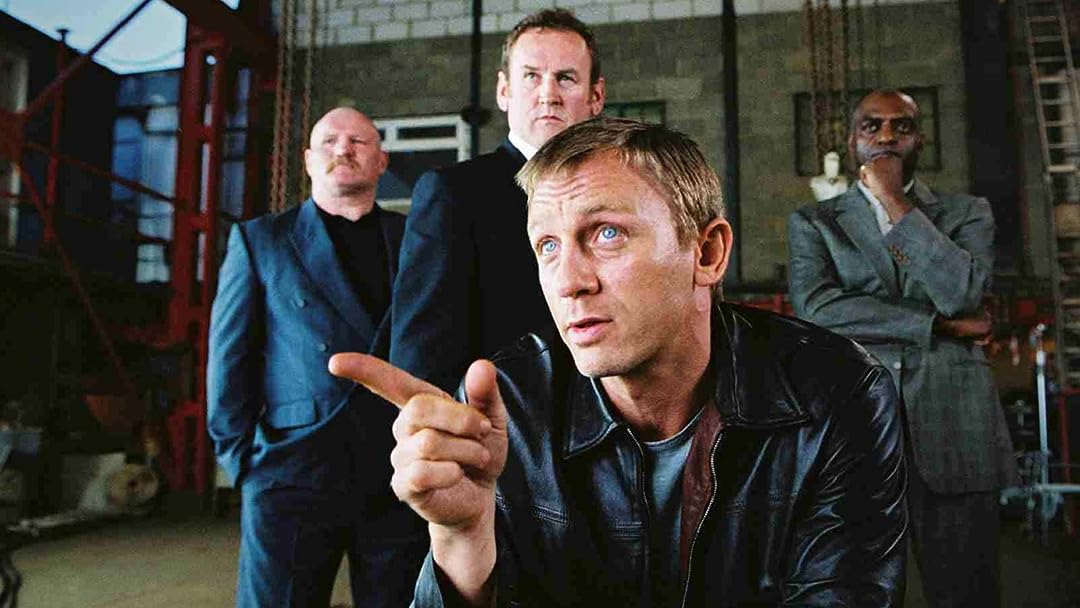 (1,924)7.31 h 45 min2005X-RayR
A West London drug dealer is caught in a high stakes game of life and death when he's duped into trying to sell one million hits of Ecstasy stolen from a vicious Serbian drug lord.

SMReviewed in the United States on March 13, 2021
5.0 out of 5 stars
Makes me wish I could go back to 2005
Verified purchase
I love Layer Cake. It's one of my favorite movies of all time and I watch it every few years. I watched it again this week and this time (and for the first time) I felt a strong feeling of nostalgia. There's something about the aughts and the cinema of that decade that we seem to have lost along the way since then. They're never going to make a movie like this ever again, and it made me a little sad to think about that.
10 people found this helpful

joel wingReviewed in the United States on October 6, 2020
4.0 out of 5 stars
Craig thinks he's a smart crook and then gets involved in 2 deals that breaks all his rules
Verified purchase
Layer Cake is another great British crime drama featuring Daniel Craig as the main unnamed character. It’s about the fantasy of the last big job that criminals have. Some think they just got in the game to make money and after they make one big haul they can walk away rich and happy. That is what Craig’s character believes but he’s got a rude surprise coming.

The movie begins with a voice over by Craig who explains how drugs changed crime. He claims he’s just a businessman answering a demand of the public. Craig think he’s smart. He avoids the boisterous gangsters. He respects the law. He doesn’t mess with guns. Finally, he says he’s ready to get out of crime. That’s foreshadowing however because all of that is exactly what he gets caught up in the middle of.

Layer Cake has some great writing. There’s a cast of criminals from the debonair to the outright nuts. Craig’s character doesn’t seem to fit in at all and yet that’s the world he operates within. There’s plenty of double crossing and some gun play as well. It all makes for a great story.
C

WALTReviewed in the United States on June 2, 2021
5.0 out of 5 stars
ONE OF THE GREATEST THRILLERS OF ALL TIME STARRING DANIEL CRAIG
Verified purchase
IN SPITE OF ALL THE SUCCESS THAT DANIEL CRAIG HAD WITH THE JAMES BOND FRANCHISE , THIS IS HIS DEFINITIVE FILM. I WATCH THIS EVERY FEW YEARS, AND REALIZE THAT FEW MOVIES ARE SELDOM MADE THIS MAGNIFICENT ANY MORE. AS A DRUG
ENTREPRENEUR GETS INTO A DEAL OVER HIS HEAD, QUITE A FEW DISPARATE PARTIES BECOME INVOLVED. MR. CRAIG IS WAY IN
OVER HIS PROVERBIAL HEAD AND DOES NOT REALIZE HOW MANY GROUPS ARE VYING FOR THE HUGE SHIPMENT OF ECSTASY.
THIS IS NOT ONLY ONE OF MR. CRAIG’S MOST STUNNING PERFORMANCES BUT ONE OF HIS GREATEST 🤙 ACTING APPEARANCES.
IN GLORIOUS HD, THE ACTION SEEMS SURREAL. THE DENOUEMENT AND FINALE ARE BREATHTAKING AND LEAVE YOU TO CATCH YOUR BREATH, A 180 TWIST ENDING. GET OUT THE 🍕 AND 🍿 & SUBMERGE YOURSELF IN THIS SUBLIME CINEMATIC EVENT.

MehReviewed in the United States on March 10, 2017
5.0 out of 5 stars
Craig's best performance. Bond wishes he were this cool.
Verified purchase
Best Dexter Fletcher ever.

Colm Meaney is totally convincing as the loyal hard man in his finest screen portrayal yet.

\Michael Gambon is riveting as the star turn, which is all the more impressive since he reputedly hadn't a clue what the film was about. The life lessons he imparts whilst ripping Mr. X off should be required learning at school. Oddly he doesn't seem to be listed on the Amazon film page, but he's definitely the focus of the film.

Tom Hardy puts in a solid workmanlike performance as Clarkie, who applies his Cambridge First in industrial chemistry creatively as he pays down his student debt.
8 people found this helpful

Howard FerstlerReviewed in the United States on August 18, 2021
3.0 out of 5 stars
Needed a printed plot guide to follow the story. Thank you Wikipedia.
Verified purchase
It was OK, but I do like a movie that has at least some of the primary characters coming out on top. Well, some of the gang got ahead, and at the end it looked like the "boss" was going to head off into a new and happy life, and then, wham(!) the rug was pulled out. Sheesh, I would have hoped that the guy finally became free, and instead he became (probably) dead. The acting was good, but I have to admit that the English dialog was at times tedious to follow. I probably should have switched on the printed text to better follow. After the movie, I went to Wikipedia to read the plot outline; it still seemed weird.

WallyReviewed in the United States on May 5, 2021
5.0 out of 5 stars
Truly a Work of Art- Don't miss it.
Verified purchase
Layer Cake is so true to life, that takes on a life of it own. There is a lot of criminal wisdom in this movie which is very wise. Since most business men are criminals, IMHO, there is much to be learned here.

The acting is superb and the characters are well developed. The plot is entertaining and the end is appropriate in terms of the wisdom conveyed by the film.

DustReviewed in the United States on April 15, 2021
4.0 out of 5 stars
Guilty Pleasure
Verified purchase
Very good action piece that manages not to insult the intelligence. Daniel Craig has proven effective in this kind of thing. Gets your attention and keeps it, if you have the patience. Glad they ran Joe Cocker's version of 'Don't Let Me Be Misunderstood'.
If you seen a lot of movies you will be pleased to see familiar cast members.
Four is a little high, but fits better than three.
2 people found this helpful
See all reviews
Back to top
Get to Know Us
Make Money with Us
Amazon Payment Products
Let Us Help You
EnglishChoose a language for shopping. United StatesChoose a country/region for shopping.
© 1996-2021, Amazon.com, Inc. or its affiliates