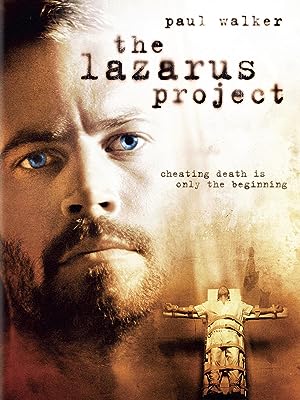 (635)
6.11 h 39 min2008X-RayPG-13
A former criminal is drawn into a criminal endeavor and subsequently finds himself living an inexplicable new life working at a psychiatric facility.

Andrew LynchReviewed in the United States on September 20, 2015
3.0 out of 5 stars
It is an ok psychological thriller
Verified purchase
This movie i picked up because i thought it was Lazarus Effect,however i found myself intrigued by the story. The movie starts off with Paul Walker with his family,then he gets fired(because of his prior police record) & his brother gets out of jail convieniently to offer his brother(Walker) to a great heist of 30 pounds of untraceable gold dust. When he picks up the offer he finds his brother is in debt and if the job does not get done Walkers brother will be killed. So needless to say they attempt the heist,a girl working flips the silent alarm & the cops come and shoot his brother as well as the debtor and an innocent worker. Then he is sent to prison to be executed,next thing you know he wakes up in Oregon(he was living in Texas with the wife and daughter) as the caretaker for a sanitarium. He keeps trying to leave and is told by strangers on the ground not to leave or he will die. He gets on a bus,then gets off and it crashes. So it is somewhat of a warning,or so he thinks. He talks to a troubled patient telling him that there are eyes on him at all times,he starts to dig up clues. He keeps finding a stick man picture etched into skin,and inbetween logs and stuff. He sees a dog and takes him in then next thing you know he wakes up with the head of this "sanitarium" tells him his wife never existed,he is a patient and not a caretaker. So it is a mind trip(sorta like Shutter Island) but he keeps scratching his arm, which has an implanted computer chip in him which monitors his every move. At the end he realizes that he is part of an elaborate scheme to take troubled people and brainwash them into believing a different reality. Walker freaks out and then decides too leave the sanitarium that reprograms brains to make them better. The way that the film ends is he just goes home to his wife and kids. To me the film was anticlimactic,i was hoping there would be more to it. All in all if you like psychological thrillers go get it or watch it. 3 stars in my opinion.
3 people found this helpful

JanReviewed in the United States on June 8, 2011
3.0 out of 5 stars
Almost, But It Was Missing Something....
Verified purchase
Paul Walker did a good job in this movie, but the movie itself was lacking a little something more. The build up to the resolution was good, but it just seemed that once you find out what was going on, it ended. The resolution could've had a little more meat to its bones. There was so much potential there. Better writers would've made this movie great!

SPOILER ALERT: The one aspect that I just can't come to terms with, is Ben's ability to "hack" into the computer without using a password. I'm sorry, but that was just NOT believable. There's no way that he had to break into a building or a room, then have full access to the computer WITHOUT password protection. Yeah, that's completely BS, especially with the information that was on that computer. They could've ended the movie better as well. There's NO WAY that those guys would let Ben just "walk" without some sort of exciting pursuit, changing of identity, moving or running...something. Maybe they are setting up for a sequel? You never know these days...

JS86Reviewed in the United States on May 4, 2015
3.0 out of 5 stars
Good story, interesting pacing.
Verified purchase
I always enjoy Paul Walker's work outside of the Fast and Furious brand (although I do enjoy his work in the fast and furious brand as well). I have to say that his acting in this movie was excellent, but the movie itself had strange pacing. Some scenes seemed to drag on while others seemed move too quickly. The overall concept of the movie was easy to follow, but some of the finer details were a little fuzzy.
I'm not sure if this is because of editing or certain things were just not fully explained in the story in general. Either way, I would recommend watching this especially if you are a fan of Paul Walker and want to see some of his other work.
2 people found this helpful

terrieReviewed in the United States on July 8, 2021
5.0 out of 5 stars
Miss you Paul Walker 😢 ❤
Verified purchase
I miss seeing Paul Walker 😢 😪 😞 I enjoy everything he starred in.
One person found this helpful

wallabumbaReviewed in the United States on April 30, 2014
5.0 out of 5 stars
Quite surprised with this piece
Verified purchase
I admit I thought this might be a bit lame since Mr. Walker is known for the Fast n Furious movies (which I do LOVE!), but they are a far cry from a drama of this type. I admit I was surprised by the twists in the storyline. This was a really good psychological thriller, and Mr. Walker's performance was (I believe) somewhat low-key and unpretentious as a guy who has no choice but to go with the flow of events around him.

If you like this kind of drama, don't hesitate to give this a look.

tylerReviewed in the United States on February 5, 2015
3.0 out of 5 stars
Climax happened too quickly
Verified purchase
This movie was alright. It was an interesting story about the life of an excon named Ben. The story took its time to build a strong base, but once things began to get very intriguing, the story just sped by. It hadn't given enough time to be confused or to be stunned by the twist. After the twist, the movie ended quite soon. They should've taken more time to let the story sink in. The leading actor, Paul Walker is the reason i watched this, and the reason the movie got 3 stars, great actor.

KennyReviewed in the United States on February 24, 2015
4.0 out of 5 stars
Entertaining Movie
Verified purchase
I'll start this review off saying that I am a huge Paul Walker fan - they are a few movies of his that are flat out bad, but this isn't one of them (I would stay away from Running Scared). I usually pretty easy to entertain as well - this movie is a little predictable, but I still enjoyed it - and it has me wanting to see The Lazarus Effect coming out this week (the two movies are not related, but similar storyline I would imagine - bringing someone back to life).
One person found this helpful

Caroline RushbyReviewed in the United States on February 16, 2013
5.0 out of 5 stars
The Lazarus Project
Verified purchase
This movie is an excellent example of the amazing capability that Paul Walker has as an actor. It is not an easy movie to watch, some of it is quite disturbing and yet he lets his character flow so smoothly. The cast that plays with him works well and the story has a happy ending. Paul should be given more opportunities to show his acting talent in more serious roles (Oscar winning type of roles). I recommend this movie to those who like to watch a good thriller unfold.
2 people found this helpful
See all reviews
Back to top
Get to Know Us
Make Money with Us
Amazon Payment Products
Let Us Help You
EnglishChoose a language for shopping. United StatesChoose a country/region for shopping.
© 1996-2022, Amazon.com, Inc. or its affiliates