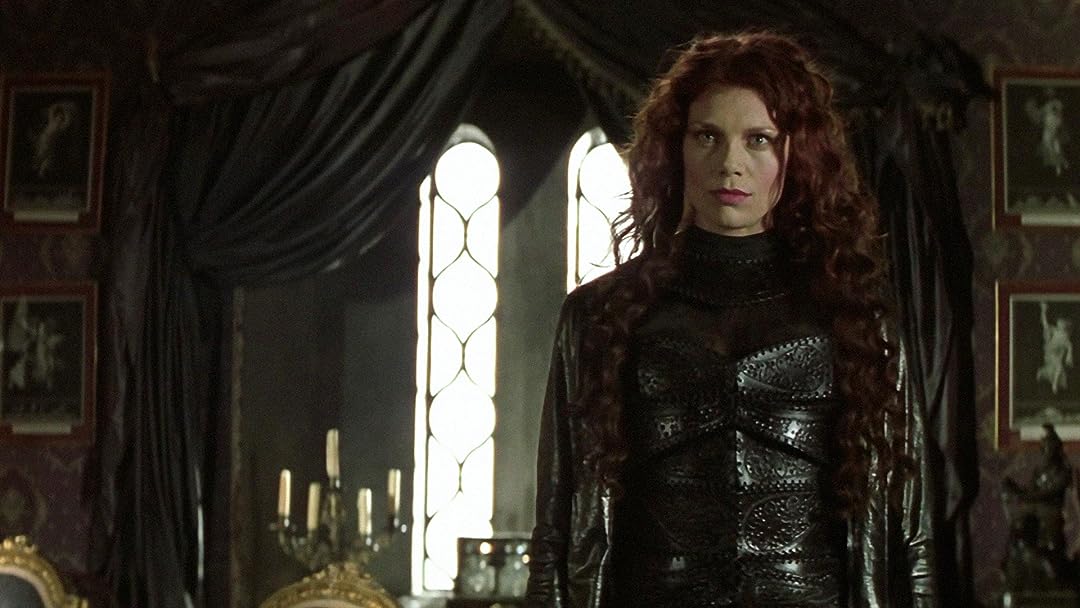 (5,366)
5.81 h 50 min2003X-RayPG-13
In an alternate turn-of-the-previous-century fictional reality, Queen Victoria assembles some of the greatest criminal legends of the time to team up for a secret mission.

joel wingReviewed in the United States on September 18, 2020
4.0 out of 5 stars
Group of heroes from 19th Cent literature are assembled to save the world
Verified purchase
The League of Extraordinary Gentlemen was based upon a comic book of the same name. It took an interesting take on the superhero genre. It’s heroes came from the works of the turn of the century literature. Sean Connery was Allen Quartermain from King Solomon’s Mines. Naseeruddin Shah was Captain Nemo from Jules Verne’s work. Peta Wilson was Mina Harker a female vampire from Bram Stoker’s Dracula. Tony Curran was Rodney Skinner who was the invisible man originally written about by H.G. Wells. Stuart Townsend was Dorian Gray created by Oscar Wilde. Shane West was Tom Sawyer from Mark Twain’s novels. Finally Jason Flemyng was Dr. Jekyll and Mr. Hyde who appeared in a Robert Louis Stevenson book. They face off against the Fantom (Richard Roxburgh) who is creating modern weapons like machine guns, tanks, etc. to start a war he hoped to profit from. That’s foreshadowing the horrors of World War I. He actually turns out to be another villain from a well known writer. M, from the James Bond films brings the heroes together to counter the Fantom, but they turn out to be betrayed in a devilish plot.

The movie is an action story so there’s chases and shootings, etc. Quartermain and Sawyer for example have to hunt down Mr. Hyde in Paris. There were enough twists to keep the plot interesting as well so it didn’t become just one fight sequence after another. Who the Fantom turned out to be was a surprise and another play with literature.

Overall, I saw this film when it first came out in a movie theater and greatly enjoyed it and it still hasn’t gotten old.

EinsatzReviewed in the United States on January 1, 2018
4.0 out of 5 stars
“Bomb voyage.”
Verified purchase
Famous literary characters serve as superheroes of a sort in this steampunk thriller. A sneaky terrorist calling himself THE Fantom, seeks to disrupt the balance of power in the world, so he might profit from the ensuing chaos. Instead of striking fear, the phony Fantom simply annoys The League, and now they have a mission―to stop the freak at all costs. But. (Almost a surprise.) It turns out that he is not a freak and not everyone is as they claim to be.
An interesting premise posing as a futuristic period piece. I bought it because it features the indomitable Sean Connery. Otherwise, it’s just a lot of rushing around, a great deal of novelty, and very little substance. None of the actors are given much to do. Most of them didn’t appear to be enjoying themselves, regardless.
Still.
I like it for all its numerous flaws and foibles. It’s crap. But it’s fancy crap.

badchessplayerReviewed in the United States on September 28, 2020
1.0 out of 5 stars
dont waste your time
Verified purchase
I can't believe they got Sean Connery to act in this piece of crap... Here's the breakdown:
Geriatric hunter leads a team comprised of d-rated hulk, invisible sexually frustrated Irishman, ageless narcissist, token female target of sexism, trigger happy American child, and a Sikh with a pretty submarine. They chase the worst terrorist ever, who literally hired the team that caught and killed him. To top it off, the movie ends with a fantastically stereotypical African Shaman, that just screams ignorance and racism, doing some sort of ritual to bring Connery back from the grave. Thanks to whoever decided to leave him dead and not make a follow up movie.
15 people found this helpful

John W. RossReviewed in the United States on August 4, 2017
3.0 out of 5 stars
Neat looking but grows tiresome by the end.
Verified purchase
It's a shame this movie is so boring because while you're watching it, you feel like it shouldn't be. For starters, this movie is really neat to look at. The director Stephen Norrington is a great visual stylist. The action sequences--on a purely visual level--are exciting and dynamic.

So what went wrong? First off, I would say the lead performance by Sean Connery is a definite liability. It is the very definition of a phoned in performance. He looks bored. For example, in his introductory action sequence, pretty much all of his friends in Africa get killed but he just goes on making quips like it's no big deal. Beyond Connery, Peta Wilson is the only actor who seems to be having any fun.

The other big problem is that the script is so lame-brained. Like I said, the action sequences are visually exciting, but because the stakes are never very clear going into them, they end up feeling like a lot of sound and fury signifying nothing. For example, in their first encounter with The Phantom in the library at Dorian's house, they fight with the Phantom's henchmen and he escapes. But then later we learn that [SPOILER ALERT] M is the Phantom and that M is trying to steal their abilities. So why the hell was the Phantom trying to kill them in the library?! It's a neat looking action scene, but ultimately pointless. Similarly, the mid-point action sequence in the Venice canals is wonderful to look at, but the physics of it make absolutely no sense. Apparently, the buildings are falling like dominoes and if they destroy a building in the middle of the city, they can stop the chain of destruction, but based on the level of destruction onscreen, you get the sense that almost the entire city is destroyed by the end of it. Then when Sean Connery confronts the villain afterwards, he says, "Venice still stands." No it doesn't! Finally, the last action sequence has no narrative structure at all. We have no idea what they're planning to accomplish or how, they just go into the enemy base and violence erupts. Then the place blows up thanks to the Invisible Man who secret placed bombs all over the complex. Great, so why did the other league members even need to go in there with him?

Lastly--and this is a big problem with movies about superhero "teams"--there are too many characters vying for the writers' attention for any one character to be adequately developed. Not that this movie doesn't give a valiant effort--there are several scenes dedicated to generating chemistry between the various characters in the league, but they feel stale because the characters pretty much only communicate in quips and cliches. Furthermore, the interplay between the league members never pays off. It doesn't nothing to raise the stakes as the movie goes on. Whatever relationships were established get tossed out the window by the end, which, as I mentioned, is just a lot of pointless, confusing action.

Bottom line, I loved this movie's visuals enough to overlook the boring, cliche script and cheesy dialogue. Watch it for the expertly filmed action sequences and nifty atmosphere. Just prepare to be emotionally detached from whatever's going on.
37 people found this helpful

Christopher HausmannReviewed in the United States on December 22, 2018
1.0 out of 5 stars
Not my favorite but good movie
Verified purchase
Had to have it in my collection! The star subtraction if for Amazon not the movie!!!I just wish that Amazine would let me custom arrange my Video Library instead of only offering by date purchased or alphabetical order. I would prefer to arrange by genre, episode, number in franchise so that I could group my movies together instead of having a hodge podge to sort through!
14 people found this helpful

yawnReviewed in the United States on May 23, 2021
5.0 out of 5 stars
If Critic's Hate It I Love It.
Verified purchase
Right off the bat this movie had my attention and while there were some parts that made me want to skip forward I didn't. Amazing movie with the WRONG title. I saw that critic's hated it and Sean Connery god rest his soul also hated it then its exactly the kind of movie I want to watch. After scanning thru all the free movies for the zillionth time and not seeing a singe one I want to watch or not seen before thru the corner of my eye I was that this movie had Sean Connery in it and so I gave it a go.
Because of the title I always skipped right over it. The "Gentleman" in the title suggested the movie was saturated if feminism. When in fact it has some because the one main female character had extraordinary power that made he practically invincible but then again a lot of the males were the same or darn close.
2 people found this helpful

ScotamazonReviewed in the United States on March 25, 2017
5.0 out of 5 stars
Love it watched it many times and still like it
Verified purchase
Not sure why this got such bad ratings, I really like it, good mix of action and humour. Good characters and pretty good acting, sometimes a little over campy but I think that was planned to be not so serious. They should have made a sequel in my opinion but maybe getting that cast back together would not be easy
25 people found this helpful

Linda LeeReviewed in the United States on September 19, 2020
2.0 out of 5 stars
I became bored halfway through this
Verified purchase
As another person wrote, there's very little substance to the story.
5 stars for scenery and high use of styrofoam.
5 stars for destruction and shootouts which appears to be the real theme of the movie.
0 stars due to contrary plot and purpose of the league.
0 stars due to character changlings.
0 stars due to redundant and predictable action scenes every few minutes.
4 people found this helpful
See all reviews
Back to top
Get to Know Us
Make Money with Us
Amazon Payment Products
Let Us Help You
EnglishChoose a language for shopping. United StatesChoose a country/region for shopping.
© 1996-2022, Amazon.com, Inc. or its affiliates