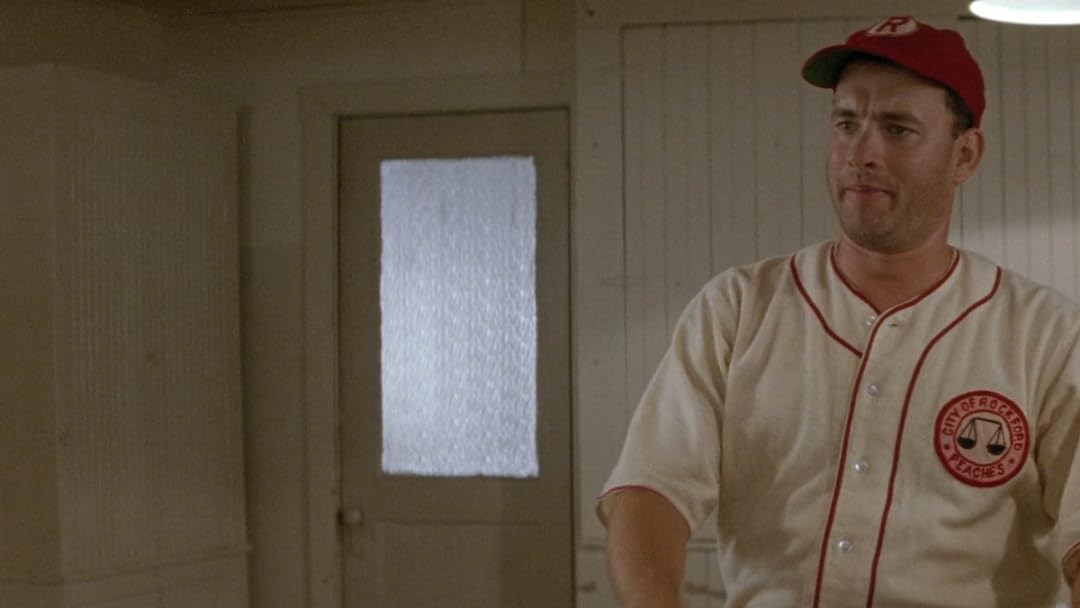 A League Of Their Own

(12,987)
7.32 h 6 min1992PG
Tom Hanks, Geena Davis and Madonna star in this major-league comedy from the team that brought you Big. Hanks stars as Jimmy Dugan, a washed-up ballplayer whose big league days are over. Hired to coach in the All-American Girls Baseball League of 1943, while the male pros are at war, Dugan finds himself drawn back into the game by the heart and heroics of his all-girl team.

Colonel DReviewed in the United States on February 15, 2020
4.0 out of 5 stars
There may be "no crying in baseball" but there is laughter
Verified purchase
Full disclosure, I’m not a baseball fan. The so-called ‘national pastime’ has never interested me and in fact I find it pretty darned boring. However, movies about baseball appeal to me. I love “The Natural” and like many enjoyed “Field of Dreams” so no surprise then that I truly liked “A League of Their Own”. This film tells the story of the women’s baseball league created in the early 1940’s to fill the void when many male professional players hung up their mitts and entered the service during WWII.

The cast is excellent starring Geena Davis as Dottie Hinson, a talented catcher and hitter and Tom Hanks as Jimmy Dugan, a washed up alcoholic ex-big leaguer who has been hired as their coach. Madonna and Rosie O’Donnell also appear as members of the team and John Lovitz makes the most of a short lived part as an obnoxious baseball scout. Directed by Penny Marshall the movie is a delight and has plenty of laughs and captures the era very nicely.

I heartily recommend “A Leauge of Their Own” to anyone even if they’re not sports fans. It’s just as much a story about women overcoming sexism and bonding together as it is about baseball. Nothing blows up, nobody is killed, there’s only a little rough language, there aren’t any superheroes to be seen; instead you get witty writing and an inspiring movie. The DVD does not offer any special features so be aware if that's important to you. Not sure why it took me 28 years to get around to seeing it but I’m glad that I finally did and you will be too if you have never seen it.

Michael Patrick BoydReviewed in the United States on October 28, 2019
5.0 out of 5 stars
A great story
Verified purchase
A League of Their Own is two hours and ten minutes and was released in theaters on July 1, 1992. The movie tells the story of the All-American Girls Professional Baseball League. There are some truths to this movie first all the players had to go the charm and beauty school. Two unlike the movie the league was poplar in the Midwest due to a lack of professional baseball teams and television and television would be the main reason the league folded. Some other footnotes about the film is that director Penny Marshall had tryouts for the movie, if you did know how to play baseball, no matter how big a star you were, you did not get cast. Though the movie is not a true historical film of the All-American Girls Professional Baseball League it does a good job of drawing a picture of what is was like for the ball players. A League of Their Own gets an AAAAA+++++

joel wingReviewed in the United States on May 4, 2020
4.0 out of 5 stars
How women had to overcome stereotypes and prove themselves as atheletes
Verified purchase
During World War II when so many men went off to war including many star athletes the idea was birthed to have a professional female baseball league. That’s the basis of A League Of Their Own. While being a comedy the main theme is women’s rights

The first thing the women considered for the league have to contend with is sexism. Jon Lovitz as Ernie Capadino is sent out to scout women who might be able to play. One of his criteria is that they have to look good because one of the draws of the league won’t just be baseball, but eye candy for men. Second, the league will have the women play in skirts to again show off their bodies. Third, they’re given etiquette lessons so that they act like proper women. Last, each one has their looks modified so that they look prettier. These all arose out of the fact that the baseball league was created by and for men. They wanted women to look at just as much as to see them play. The players therefore had to fit the stereotypes of women that men had for them. Their athletic skills were secondary.

it’s against this background that women have to play. That’s what the majority of the film is about the women proving themselves as baseball players. They have to go through the cat calling, the low attendance, the doubts, etc. The movie is about how they persevered.
C
5 people found this helpful

AnchorageReviewed in the United States on August 4, 2017
5.0 out of 5 stars
Funny and Touching
Verified purchase
One of the best baseball movies, ever. Funny and touching, it will make you laugh and possibly cry at the end. Geena Davis is awesome-she kind of is in everything anyway. This was the last movie I went to see with my father before he passed away. He LOVED the Jon Lovitz character. But I recall we disagreed about the ending. I thought Dottie let her teammates down in the end in a couple of ways. And I couldn't understand why Marla chose to leave the team to get married-couldn't she have done that in the offseason?
4 people found this helpful

MajorHavoc54Reviewed in the United States on May 25, 2014
5.0 out of 5 stars
"Oh piss on your hat!".....The blu-ray review.
Verified purchase
This is without a doubt, among one of the best Baseball movies ever made (IMHO), it's got a cast full of names:
Tom Hanks
Geena Davis
Lori Petty
Madonna
Rosie O''Donnell
Garry Marshall
Bill Pullman
When the war kicks up in the Pacific and in Germany, Men's Baseball takes a hiatus so the owners of Baseball decide to initiate a woman's Baseball league......"4 teams, 16 girls to a team, that's 64 girls!"
Director Penny Marshall did a great job of casting older versions of the younger players' parts, especially Madonna's, Geena Davis's and Rosie O'Donnell's characters.
She also did a tremendous job of putting the older actresses and actors in the Baseball Hall Of Fame at the end of the movie next to their younger selves, it just made for a very unique and emotional experience.
The Baseball scenes were very well done and all the injuries that some of the actresses received in the film were real, including the slide into third by one of them who got this real ugly looking raspberry on her thigh and Rosie's bandage on her knee requiring several stitches.
The movie was presented in widescreen and was crisp and clear in sound and picture, and contains several bonus features including Director and cast commentary, 15 deleted scenes, "Nine Memorable Innings" Documentary and Madonna's "This used to be my playground" music video.
This movie is a must have in any Baseball movie fan's collection, it's filled with laughs and I definitely recommend it.
16 people found this helpful

Michael Di PietroReviewed in the United States on October 5, 2020
5.0 out of 5 stars
one of the best sport themed movies around
Verified purchase
it's a great film with an excellent cast and story.

cast: no one has an ego to out do another. Tom Hanks does a superb job of balancing out the rest of the female cast. "ballplayers...?" [spit]

story: a very important time in our history. WW II is set as a backdrop for the Women's league to even be a thing at the time. further, women have only earned their suffrage in the last 20-plus years. plus, women were still seen as stay at home mothers and the domestic lifestyle was their paths in life at the time. not much they could do in a male dominated world. that is, up until we (US) entered WW II. something to think about as you watch this film, because there are times when things show up in the film that i have detailed here. i'm a guy and the stuff they are to do is stomach churning.

one note: i cannot call grown females as "girls" as portrayed in the film. i don't hear girls and gentlemen. so why low ball females collectively? yeah, yeah, i know it is a sign of the times. i'm pointing out the fact something i couldn't and won't do simply because society allows it.

villainsruleReviewed in the United States on November 3, 2021
2.0 out of 5 stars
Geena Davis yay
Verified purchase
Watched this for geena Davis and that it’s a classic. The movie wasn’t horrible, it kept my attention, I recommend the movie to any female. It’s just not a movie I’d really care to ever watch again. I mean if I had to I wouldn’t mind but it’s not a favorite. I liked geena Davis in it and it had other popular actors too and was a great look into the times. Nothing really wrong with the movie, I’m just not into sports but I did appreciate the family dynamic and the drama in there. The ending had me tear up a little. Just wish it was more about the characters than about baseball
See all reviews
Back to top
Get to Know Us
Make Money with Us
Amazon Payment Products
Let Us Help You
EnglishChoose a language for shopping. United StatesChoose a country/region for shopping.
© 1996-2021, Amazon.com, Inc. or its affiliates