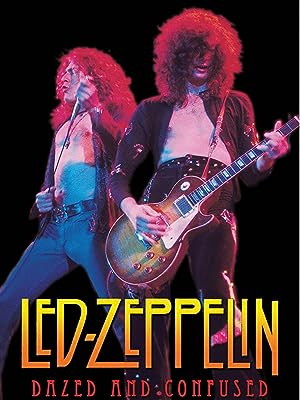 (161)
7.457min201216+
A rare look at Led Zeppelin, from their humble beginnings to their status as rock gods. Take a journey where incredible heights and extreme lows helped forge one of the greatest rock bands ever.

someguyReviewed in the United States on May 10, 2021
2.0 out of 5 stars
They Deserve Better.
Verified purchase
This is what happens when someone making a rockumentary doesn’t want to pay royalties to use a bands music. Pieced together with odd interview clips, the same 3-10 second fan video clips used over and over and very poor attempts at “sound alike” music that remind me of what you would find on a “royalty free” music site.
10 people found this helpful

ThomasReviewed in the United States on September 30, 2021
1.0 out of 5 stars
What were they thinking when they made this documentary....
Verified purchase
You're doing a documentary about one of the more famous rock bands in the world, and the back ground music doesn't even sound like zeppelin. Sounds like dubbed over crap, and there are no lyrics; which is one of the more enjoyable aspects of Zeppelin. Plant competing with Jimmy competing with Bonzo, take away the Plant and you have lost everything that makes Zeppelin, Zeppelin, The Quintessential Rock band of the 20th century.

I couldn't even watch the whole thing, absolutely terrible. Even the old reel clips they put up were repeated five or ten times every 5 minutes. Documentaries about Musicians are supposed to make you ascertain the brilliance of the Musician and respect why they are so good. Not hate them.

Looks like it was put together by a high schooler in music class on an overnight bender. Don't waste your time watching this. Absolute crap.

Stephen GuthrieReviewed in the United States on October 12, 2016
5.0 out of 5 stars
ABSOLUTELY STUNNING !
Verified purchase
After reading some of the reviews concerning this movie, I must admit that I was a bit apprehensive. I ordered it anyway. ABSOLUTELY FANTASTIC !! I saw Led Zep in concert in 1972, 1975 and 1977 at the San Diego Sports Arena....and I was the first in line to get in each time (when spending the night at an arena the night before was thought to be insane - and it was "open seating" back then - with no rip-off ticket agency scalpers !! I actually took color photos of them when in the front row two of the three times I saw them !)....at any rate, a good friend of mine at University High School in San Diego, Cameron Crowe, recently left school to be their "road writer" for Rolling Stone magazine, after R.S. editor, Jann Wenner, read Cameron's work in "Cream" magazine. He and I loved Led Zeppelin in high school. They were the most FANTASTIC band in the world to see in concert...and after watching this DVD, it brought back some of those incredible memories I felt as a 24-year old (now in my 60's)....and while I was watching them on my TV with this DVD, I felt, ONCE AGAIN, the power and the AWE from the mighty Zep once again....fantastic interviews of the band, and great chronicle of the band, how they formed, the myths and legends, and the incredible history of the most dynamic rock and roll band ever seen, heard or to perform on planet Earth's history !
41 people found this helpful

RJLReviewed in the United States on November 20, 2021
3.0 out of 5 stars
No Place for Old Men
Verified purchase
If you grew up listening to early Yardbirds albums on your parents console stereo and Zeplin in your dorm there's nothing here for you even though it's free.

Repletion of snippets of this and that over and over again. Full of fawning old geezers spouting superlatives. But I say this as a guy who has this stuff in my DNA. It's what made me. I still play Page's live intro on "New York City Blues" off Yardbirds Greatest Hits almost every time I pick up the old Stratocaster. Hell, I paid $100 in 2020 for an unopened copy of the afore mentioned vinyl LP. It was the first LP I ever bought as a kid for $3.99 or something at J.C. Penny.

But if you are fifteen and an aspiring guitar player or something you need to see this stuff and other docs about what the Brits like Beck, Clapton. and Page (and the Stones) did with the American blues idiom post Elvis and skiffle. See what it was like before everthing was "awesome" and nobody went "WOOOOOOO",

Ron R.Reviewed in the United States on October 10, 2021
5.0 out of 5 stars
Not enough stars
Verified purchase
Wow!..Bravo!..
I was 12yrs old when Zeppelin first hit America. They were my go-to band ever since. There are many great bands, but few bands who deserve the accolades given them. Led Zeppelin's music will influence music, across multiple genres for generations.
I don't know if I love them because of how great they were, or if they're great because so many of us saw and heard it for ourselves.
One person found this helpful

Glama PussReviewed in the United States on August 25, 2021
3.0 out of 5 stars
Awake and Focused is...
Verified purchase
more like it for the title. Such strong musicians. I think only Jeff Beck can top Jimmy's guitar prowess imho, Bonham was the gifted soul of a drummer, Paul Jones a fantastic bassist, and Grant...played something?? Never saw that and not in this film either. But what a voice & a great contrast to Jimmy, from the outfits to their attitudes. Dont expect long clips of the real band playing which is just sad. Recommend.

ArsMagnaReviewed in the United States on October 20, 2021
5.0 out of 5 stars
One of the Greatest Rock and Roll Bands
Verified purchase
When I was a kid, I liked Led Zeppelin, but worshipped Hendrix. As I have aged and my tastes have matured and refined to the point that I listen to virtuosos of all time periods and cultures on all continents. My appreciation of Jazz, Classical, Flamenco, Indian, Turkish, African music has actually amplified my Love of Led Zeppelin. I would not trade one Led Zeppelin for all punk, grunge and heavy metal combined
One person found this helpful
See all reviews
Back to top
Get to Know Us
Make Money with Us
Amazon Payment Products
Let Us Help You
EnglishChoose a language for shopping. United StatesChoose a country/region for shopping.
© 1996-2022, Amazon.com, Inc. or its affiliates