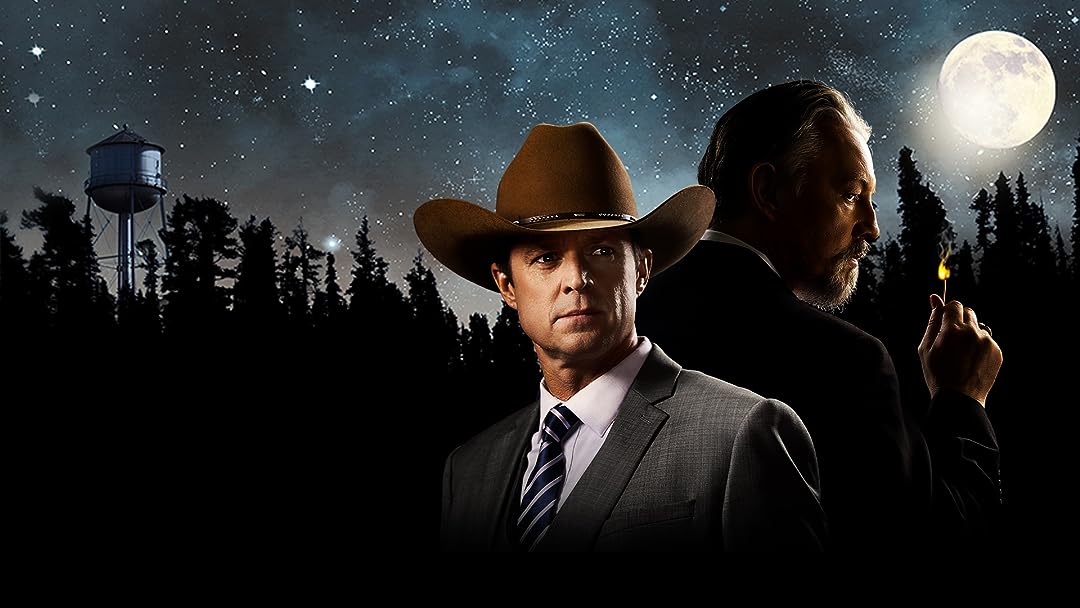 (310)
6.01 h 37 min2018X-Ray16+
Successful big city lawyer Casey McKay travels to a small rural town where he reluctantly agrees to defend his no-good ex-brother-in-law for murder, but in the midst of fighting for his client's life, Casey finds himself in a fight for what he loves.

Yankee in ParadiseReviewed in the United States on May 3, 2020
4.0 out of 5 stars
... WORTH Watching! !
Verified purchase
Yep. After watching the trailer I figured it might be a good, it looked like it could run ... Tommy Flanagan is a great villain. He simply Oooozes with evil. Nick Searcy, (Straight out of Justified) is an excellent side kick picking up the load in every scene he does. Eric Close, the white hat lawyer has that American Hero look and feel to him. Good Job. Story line works. Excellent camera work too. The soundtrack is a cross between country and Hokey-wolf. But it too, works. Amazon has a TON of crappy flicks but not this one. Overall it is well worth watching. I'll probably watch it again.
42 people found this helpful

Silver Screen VideosReviewed in the United States on June 4, 2020
3.0 out of 5 stars
Order in the Courtroom
Verified purchase
If you ever wondered what the TV series “Justified” would look like if Raylan Givens was a cutthroat trial attorney rather than a U.S. Marshall, then “Legal Action” is the film for you. This made-for-cable-TV movie with Eric Close as a stand-in for Timothy Olyphant plays like a pilot for a bizarre Justified/Matlock hybrid. Yet, thanks to some winning performances, it’s a mildly passable Prime Video entry.

Eric Close stars in “Legal Action” as a hotshot Nashville attorney (this movie was probably filmed while he was in the cast of “Nashville”) who has a trial winning streak that’s reached triple digits. As a favor to his ex-wife, Close agrees to take on the defense of her brother, who is accused of murdering the district attorney in their small Georgia hometown. The brother is actually an ex-con trying to go straight who ran afoul of the local crime boss (Tommy Flanagan) and is now under pressure from Flanagan’s goons to plead guilty. Close starts his own investigation and runs afoul of those same goons himself, leading to several confrontations both in and out of the courtroom.

Those expecting “Perry Mason”-styled theatrics in “Legal Action” will be sorely disappointed. Even Barney Fife could figure out who’s behind the killings in this case, but that’s not really the point. Before it got to Amazon Prime, “Legal Action” made its debut in 2018 on the INSP network, which features a lot of Westerns and action films. So, the courtroom takes a back seat to the gunroom here. Close’s character is the descendant of Texas Rangers and sports a Stetson hat to go along with his tailored three-piece suits. He also takes great pride in toting his gun collection around. Not to be outdone, villain Flanagan is also a firearms aficionado, and he and Close compare notes and weaponry to pass the time in one scene. It’s not too much of a spoiler to reveal that the two wind up slapping iron before the movie is over.

On those rare occasions when the writers remember that “Legal Action” is supposed to be about lawyers, the film becomes somewhat interesting. Viewers have a chance to see about two minutes of the trial during those rare moments Eric Close isn’t out doing some extremely juvenile-level sleuthing. The trial action is good, but the best scene in the entire film occurs in the first few minutes when the attorney convinces a department store’s lawyer not to pursue shoplifting charges against Close’s obviously guilty client.

Still, “Legal Action” is about as generic an action movie as you’ll find, without any of Elmore Leonard’s great one-liners that made “Justified” so memorable. Despite the extremely familiar plot of “Legal Action,” the core characters are entertaining, thanks to a couple of skilled supporting actors. Tommy Flanagan has a lot of fun as the flashy villain (the script even explains his Scottish brogue). However, Nick Searcy is even better as Close’s sort-of investigator, a hotel owner called “Ex” because he used to have all sorts of other occupations.

It’s no surprise that “Legal Action” wound up showing on a fourth-rate cable network and later as cheap Prime Video filler. Still, having seen many other similar low-budget titles, this movie is relatively well (albeit cheaply) made with some decent acting and production values (including some magnificent Georgia mountain scenery). I’m giving it a mild recommendation as an undemanding summer watch. In this case, “Legal Action” is better than no film action at all.

BeachSwanReviewed in the United States on June 5, 2020
5.0 out of 5 stars
Kept my attention the whole time
Verified purchase
I have watched a LOT of movies, all kinds. I love the John Wick movies, unexpected indies, hidden gems, murder mysteries, documentaries and now and then a Hallmark binge. This one is a great movie about an especially talented hero with flaws he is growing out of and in a story line that stays interesting. Finding a movie that keeps my attention and is well made and smooth enough in development to keep me from saying noooooo and fast forwarding just to make sure the ending is what I thought isn't easy. This one is good. I watched the whole thing and chuckled in the right places and felt hopeful in the end. Fun heroics, good team players. I hope there are more of these. A great leading character.
15 people found this helpful

Bev RobertsReviewed in the United States on October 17, 2018
5.0 out of 5 stars
Yes!! Tommy as a villain (loooove it)!
Verified purchase
Surprisingly a good good flick! I think it'd be a great series too, we need more of these dark gritty pictures, they didn't go overboard on unnecessary action and really did cast the perfect actors - Bravo 🍀
23 people found this helpful

T. MooreReviewed in the United States on October 4, 2018
5.0 out of 5 stars
I really hope that they make this into a series...
Verified purchase
I haven't enjoyed a movie like this is quite some time. Everything about this movie hit the right note with me and I was entertained from beginning to end. If this isn't made into a series, then someone is really making a huge mistake!
20 people found this helpful

Frank DogheartyReviewed in the United States on May 31, 2020
5.0 out of 5 stars
Good entertainment
Verified purchase
These days, I hardly ever write reviews anymore. For some reason, too many of them get blocked out for no apparent reason. Even Amazon reps couldn't tell me why.

Well, here is another attempt, in order to help out prospective watchers.

A fine balance between theory and action in a good storyline.

Remarkably refreshing in the current range of selection for free movies.

If that doesn't satisfy you, look somewhere else.
10 people found this helpful

Manuel BlancoReviewed in the United States on February 3, 2019
5.0 out of 5 stars
A must-see! Terrific!
Verified purchase
Good old western style movie set in modern times. Lots of action & actors were awesome. Gives you hope that there are still good guys out there. My wife and I loved it. Great movie!
16 people found this helpful

BWReviewed in the United States on October 10, 2018
5.0 out of 5 stars
Action, Humor and Detective Story - Whats not to like
Verified purchase
Really enjoyed this movie. This is the kind of stuff that I look for in entertainment. Loved the cast, the story came together like a jigsaw puzzle. Perfect. Would like to see more movies like this. Was loosing faith that good movies could no longer be made.
14 people found this helpful
See all reviews
Back to top
Get to Know Us
Make Money with Us
Amazon Payment Products
Let Us Help You
EnglishChoose a language for shopping. United StatesChoose a country/region for shopping.
© 1996-2021, Amazon.com, Inc. or its affiliates