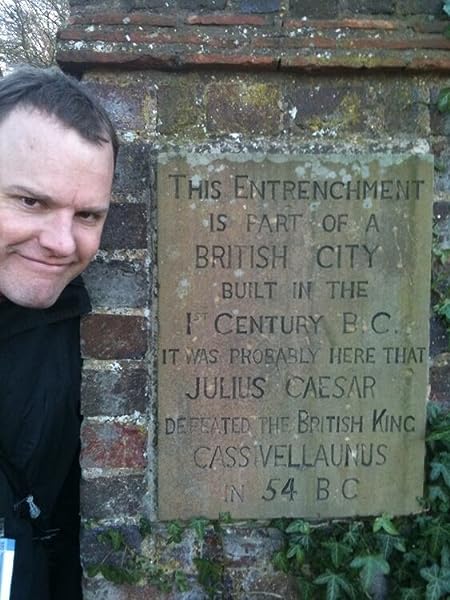 by William Kelso (Author)
4.5 out of 5 stars 210 ratings
Book 8 of 10: Soldier of the Republic
See all formats and editions
Sorry, there was a problem loading this page. Try again.

Late summer 211 BCE. Trouble is brewing for the Republic as a new front threatens to open up in the long and bitter war between Rome and Carthage for dominance of the world. As a newly minted legate of Rome working for the Senate and his patron, the young Publius Cornelius Scipio, Flavius must undertake the arduous and dangerous journey to the far-flung Tin Islands, a semi-mythical land beyond the sea. His mission: To maintain diplomatic relations with the local Celtic tribes and to protect vital Roman and allied interests.

But Carthage too has set their sights on the precious resources of tin that are helping fuel the war industries of the belligerents. Determined to protect their ancient trade with the Tin Islands and thwart growing Roman influence the crafty merchant masters of Carthage have decided to send one of their best.

In the mist shrouded isles in the far north Flavius will soon discover something far more precious than gold.

Page 1 of 1 Start overPage 1 of 1
Previous page
Next page
Start reading Legate of Rome (Soldier of the Republic Book 8) on your Kindle in under a minute.

Hello, my name is William Kelso. I was born in the Netherlands to British parents. My interest in history and in particular military history started at a very young age when I was lucky enough to hear my grandfather describing his experiences of serving in the RAF in North Africa and Italy during World War 2. Recently my family has discovered that one of my Scottish and Northern Irish ancestors fought under Wellington at the Battle of Waterloo in 1815.

I love writing and bringing to life the ancient world of Rome, Carthage and the Germanic and Celtic tribes. It’s my thing. After graduation, I worked for 22 years in financial publishing and event management in the city of London as a salesman for some big conference organizers, trying to weave my stories in the evenings after dinner and in weekends. Working in the heart of the original Roman city of Londinium I spent many years walking its streets and visiting the places in the city, the names of which commemorate the 2,000-year-old ancient Roman capital of Britannia, London Wall, Watling Street, London Bridge and Walbrook. The city of London if you know where to look has many fascinating historical corners. So, since the 2nd March 2017 I have taken the plunge and become a full-time writer. Stories as a form of entertainment and education are as old as cave man and telling them is what I am going to do for the rest of my life.

My stories are all about ancient Rome, especially the early to mid-republic as this was the age of true Roman greatness. I have written 16 books so far with an aim of reaching a 100. My books include, The Shield of Rome, The Fortune of Carthage and Devotio: The House of Mus and the nine books of the Veteran of Rome Series. Caledonia (1), Hibernia (2), Britannia (3), Hyperborea (4), Germania (5), The Dacian War (6), Armenia Capta (7), Rome and the Conquest of Mesopotamia (8) and Veterans of Rome (9). I am currently working on a new series called The Soldier of the Republic. Go on, give them a go.

In my spare time, I help my brother run his battlefield tours company which takes people around the battlefields of Arnhem, Dunkirk, Agincourt, Normandy, the Rhine crossing and Monte Cassino. I live in London with my wife and support the “Help for Heroes” charity and a tiger in India.

Please visit my website http://www.williamkelso.co.uk/ and have a look at my historical video blog!

MSHusker
5.0 out of 5 stars Great Historical Fiction
Reviewed in the United States on December 29, 2021
Verified Purchase
Mr. Kelso writes another great story about the Punic War of Rome vs. Carthage. The tide is about to turn with the appointment of a new young Roman commander. I look forward to his next book.
Read more
Helpful
Report abuse
See all reviews

Dave Parker
3.0 out of 5 stars Still waiting for the main deal. Epecycles and Flavious face off
Reviewed in the United Kingdom on August 2, 2021
Verified Purchase
Although the story continues it was more of a fill in to set the scene for hopefully a confrontation with arch spy enemy Epecycles. The Next story book should accelerate towards that.
Read more
Report abuse

mat
5.0 out of 5 stars Excellemt
Reviewed in the United Kingdom on October 9, 2021
Verified Purchase
Another excellent story that keeps you enthralled from beginning to end. Cannot wait for the next book. Enjoying the action.
Read more
Report abuse

jon graham
4.0 out of 5 stars Can't wait for the next round
Reviewed in the United Kingdom on November 29, 2021
Verified Purchase
Very good read great story of the family struggle during the punic wars and life struggles in ancient times more please
Read more
Report abuse

graham cawthorne
5.0 out of 5 stars Amazing as usual
Reviewed in the United Kingdom on December 14, 2021
Verified Purchase
Another great book In the series all the books are a great read in both series well worth a look
Read more
Report abuse
See all reviews